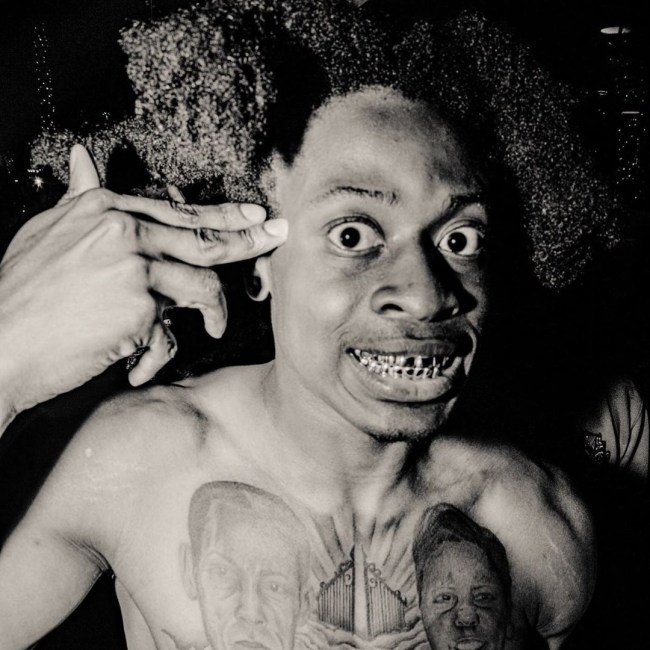 The clique is coastal, international, but thanks to the power of the internet, to you — we’re local. Subscribe to the Passion of the Weiss Patreon so we can keep bringing you the best music journalism around.

The first thing you notice about Trapland Pat is his eyes. Go watch the video from ‘’Big Business,” his breakout hit from 2020, where his retinas look like bowling balls lunging out of his sockets. It’s an exaggerated Spongebob-type bulge, while Pat amplifies the effect by running around like a chicken with his head cut off. Oh, and the gold teeth that cost more than private school tuition. The vision is jarring. Pure trickery that works perfectly. One of those videos that you can’t forget, where it feels like a new star has entered the rap constellation.

Let’s flash back to 2018: Pat was sent home from his small Indiana college after losing his football scholarship. Within days, he went from covering receivers at spring scrimmage to Deerfield Beach without money, a degree, or prospects. The details remain muddy. Apparently, when he returned home for spring break, Pat got charged with drug possession with intent to distribute. He says he was at the wrong place at the wrong time, and it led to a feeling of free fall. He’d worked his whole life at sports. His family had counted on him to eventually go pro. But when he got in trouble, it was abruptly cut short. Consider him another victim of the NCAA system, where athletes are expected to play for the gift of an ‘’education,” while schools exploit their labor. You can’t expect a kid from dire poverty not to try to get money any way he can if he’s spending all of his free time playing sports for free.

So Pat came back home and got serious about making music. This wasn’t entirely a new thing; he’d started rapping in the 10th grade while still aiming to play for the Miami Hurricanes. But over the last year, the rapper of Haitian descent has become a regional rap star. His most obvious analogue is Kodak Black with his blend of hyper-melodic rapping and singing. But where Kodak has a higher, almost nasally pitch, Pat sinks lower into a savage baritone that seemingly bunny hops over the beat yet never loses its balance or pacing.

In conversation, you notice that his speaking voice is almost identical to his rapping voice. Both of them are direct and conversational, but still hyper-active. He’s somehow a cartoon character who can poignantly spit the real. Yet it’s that sense of floating musicality that leaves the most startling impression. He can switch it up from singing tangled rhythms to stomping on a beat in a second’s breath.

If his career truly began with “Big Business”’– where he rapped about turning princesses into mistresses over what sounded like the bando remix to Jimmy Wopo’s “Elm Street’’ — he’s become a fully-fledged regional force. It’s all on display on his latest release, April’s Thru Da Door, where he evokes the paranoia that comes with mobbing in South Florida, especially when your stardom has made you a moving target. He’s expanded on his sense of melody and the sheer nimble grace of that flow. Broward County might have already produced some great talents, but Pat is anointed to be the next out of the South Florida stomping grounds. Recently, I caught up with him to discuss football, his infamous hairstyle, his Haitian ancestry, and the boot. – Jayson Buford

What was it like growing up in South Florida?

Trapland Pat: It’s a lot of crime down here. And I’m Black. Police, they racial profile you a lot. But other than that, it was straight. It’s a lot of stuff that made me who I am today. So I’m thankful for everything.

What was your neighborhood known for?

Trapland Pat: It’s a tourist attraction place. South Florida, they’ve got a lot of nice places to club and stuff. Miami, South Beach, it’s a lot of places, basketball arenas and stuff. So it’s really a place you can go away to relax yourself. The beaches are the most one, though. People usually come down here for the beach.

But for you growing up, it was a little bit different because you’re actually from there.

Trapland Pat: Yeah. I’m from there. So it was never really about the beaches. It’s about making it out, trying to have a plan.

What’s it like being from a place where it’s basically an island?

Trapland Pat: Isolated. When I started branching my way and going to other cities, you can’t really blend in that good. Shit is just foreign to you. Shit is different. the way people dress, all type of stuff, conversations, how they talk, everything is different. We’re more farfetched.

I know that you played football growing up. What position did you play?

Any player that you looked up to as a kid?

Trapland Pat: Denard Robinson, he’s from my neighborhood. Shoelace. He played for Michigan. He won the Heisman.

What was your best football game?

Trapland Pat: High school. I had a 60 yard run. I was at running back. Coach let me get at running back the day before my birthday. I took that shit from the backfield, down the sidelines, stiff armed somebody and everything.

They thought I was out of bounds. I scored. It was crazy. Right before halftime. That was the craziest touchdown right there. I played receiver. So I never really got in the backfield. I got in the backfield, got the little handoff, and I was just down on the sideline. It was a long one.

When did you start pivoting towards music?

Trapland Pat: Tenth grade year. I was in high school. I always used to rap a little bit. But I started taking it more serious right when I came from college. But I was always writing. I always kept writing.

Do you remember the moment where you knew it was go time? When you knew that you had to start really leveling up with the music?

Trapland Pat: Yeah. When I got sent home from college. I got into trouble down here, and I was like, “Damn. I got to do something.” Just like how I’m doing the football, I just give the same energy into whatever I’m pursuing, so that’s when I knew the music had to be the one.

Trapland Pat: Yeah, it was a little small school. It was in Indiana, close to Indianapolis.

After they pulled the scholarship, what was life like for you?

Trapland Pat: Once they pull it, you got to go back home right away. So down here it was like, “Damn.” People didn’t know. I didn’t really tell nobody.

But when you were up there, was it a culture shock for you?

Do you think that had anything to do with what happened? The racism?

Trapland Pat: No. That didn’t have nothing to do with it. But I’m saying that that was my first time really experiencing first hand racism on a daily basis, because you know Indiana. There isn’t really a lot of black people over there.

So you leave Indiana. You go back to Florida, you start making music. Who did you grow up listening to, first and foremost, artist wise?

Trapland Pat: A lot of people, man. Gucci. Scooter, Kodak. Claws, BG, Hot Boyz, listening to them over there. I’d go listen to a lot of people, Drake, Future, a wide variety.

You were into Rick Ross, right? What’s your favorite Rick Ross song?

Trapland Pat: “Stay Schemin’” — that song right there, it gives me the same feeling every time I hear it. Every time you hear that thing come on, it will just throw you into an illusion.

Trapland Pat: Two totally different phases of my life, too. My mindset was different. Interstate Baby, I think had more of a younger perspective on life. In 2020 Vision, I started to get more clear on what I really want. So it’s, they both are different because it’s like the different phases I was going through in my life, and my understanding on certain things.

How have you grown over the past few years and how have those experiences now shaped you as a rapper, and as a person?

Trapland Pat: I think I make better decisions now, bruh. I used to think more short term rather than long term. Now I know some stuff is just not worth it. But before, I used to think anything would be worth it. I just need it. It doesn’t matter how it’s got to come.

The South Florida region is known for interesting hairstyles. Kodak has his hair. Denzel Curry’s got his hair, you got your hair. How did you decide to do that?

Trapland Pat: My neighbor in Deerfield, when I was growing up, when I was small, you would see them. All the older dudes had them. They were big, and I always used to be like, “Damn.” I was 10, 11, 12. I used to be like, “Damn. I want my shit to be bigger than them when I can get it,” because my people is Haitian. They wasn’t about to let me get them at 11, 12, 13. Hell no. I used to always start them, but they would get cut off. So I’ve been wanting to do them. There’s people in my neighborhood right now that’s still got them. I always wanted them, because most of the older niggas over here, they had them. I wanted them.

What’s that like having Haitian blood in your background?

Trapland Pat: Yeah. That shit’s pretty good. And it’s pretty, it’s a blessing and a curse. Growing up over here in South Florida, people don’t really Haitians like that. So Haitians used to, there used to be a lot of problems.

I live in Brooklyn, and I’m friends with a Haitian who says that growing up, it was hard for him because Haitians and other Caribbeans don’t always get along.

Trapland Pat: Hell yeah, down here, Haitians and Americans, you could get jumped for being Haitian down here when we were growing up. Haitians used to go through it the most with the Americans. Americans used to be jumping the Haitians and shit like that, back and forth shit.

You have a Dolphins jacket in the album cover of 2020 Vision. Is Miami fashion something you’re trying to get into a little bit?

Trapland Pat: Well I stand with Florida, dawg. I’m with Florida, so I’m a brand where I’m from. I’ll brand Florida. Any sport that’s coming from the area, I guess I got to stand for it because without Florida, who am I?

Are you into basketball at all?

Trapland Pat: I kind of am. I never really got into it all the way, but I love basketball. I can just never sit a whole season and watch games, dawg.

What did you try to do differently on Thru Da Door than you did on 2020 Vision?

Trapland Pat: Industry type of music. Be able to get my message across right. Don’t be too much all over the place, be able to stay on topic. Paint pictures for them. Let them be able to see what I’m rapping about without having to second guess if that’s what I’m talking about.

One more bonus question. The Miami Hurricanes. How important are they to South Florida?

Trapland Pat: I always wanted to be a Hurricane. When I was in high school, I figured out that it was a private college. They have a school of medicine, and I always wanted to go towards the medical field. So yeah, they were always number one on my list.

Michael Jackson’s Estate Reportedly Made Nearly $2B Since His Death