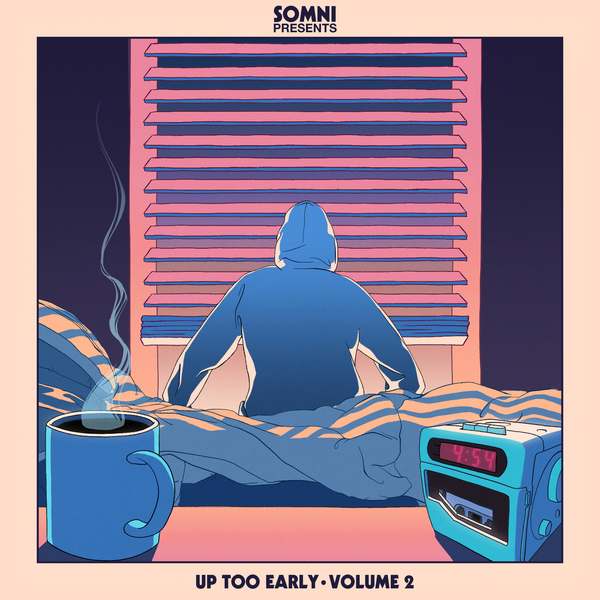 We’re always trying to catch the morning rush. Please support the hustlers at Passion of the Weiss by subscribing to our Patreon.

The notion that people are most productive between the hours of roughly 9 a.m. and 6 p.m. is a myth perpetrated by the Man to keep us ants and worker bees in our place, but that conversation likely is better had down at the docks with your more conspiratorial-minded friends. That being said, it’s the truth, and clearly one that the fine folks over at beloved label, Friends of Friends, buys into as evidenced on their latest release, the second in their Up Too Early series.

This one, curated by none other than the criminally underrated Somni, picks up where the first entry left off. Offering the latest in chilled vibes and narco-hop (TM pending), the audio overseer took the opportunity to release both new joints of his own and tracks from some of his closest and most respected audio co-conspirators. Shrimpnose, Joe Nora, Omari Jazz & Meridian, Powermitts, S. Maharba, Duren, Surfer Dave and Harris Cole all get in on the action, whether on their own or collaboratively, and there are some truly stand-out tracks here, including the seemingly incongruous “Morning,” “Daylight” and “Dusk.” I guess “Too Early” clearly is in the eye of the beholder.

In anticipation of the release, Chris Daly recently had a gabfest with the erstwhile FoF owner and label head Leeor Brown and the aforementioned Somni to get their take on things. — Chris Daly Leeor, from our brief back and forth already, I believe the Up Too Early series was your idea. What inspired you to make this happen?

Leeor: I’m always trying to think of different ways to bring music out, and even though artist projects are where my heart is, a compilation gave us the ability to work with even more talented people. Up Too Early kind of happened naturally after having kids and changing some habits (hello early mornings!) and listening habits. Being up early just gave me a desire to explore those softer tones that weren’t sleepy. Luckily, there were a lot of friends down to contribute, and the idea took off.

Whether it’s Up Too Early or Late Night Tales, the intended time of day to play these jams clearly is front and center. First, when is “too early?” Secondly, what’s magical about that time of day in your mind for this project?

Leeor: Originally the idea was that off time between 4-6:30 where it’s too early to want to get up for the day, but kind of too late to go back to sleep. After some time, the playlist really expanded and became something that’s really for any time you want a nice, calming listen. Sunday a.m. until around 11am is prime time really for me and the family.

Were there any “rules” to be included? Did these artists have something specific and/or unique that you wanted to capture?

Somni: I wouldn’t exactly say there were “rules,” but I did talk about the overarching theme of the project to all the artists. But mainly I think I tried to pick artists that I knew would do an amazing job with that type of vibe in mind. Guys like Soosh, Harris Cole, Meridian have that kind of dreamy twilight thing going on already in their music, so I thought they’d be a great fit for the project.

Leeor: No hard rules, other than maybe “no harsh tones.” Just tried to relay the idea and vibe we were looking for, and Leo ran with it

Somni, how did you get involved?

Somni: The whole thing kind of came around because I kept sending Leeor a bunch of music, homies who were doing really cool things or artists that I’d found out about through mutual friends, like “BRO YOU GOTTA SIGN ALL THESE PEOPLE LISTEN TO THIS SHIT!!” And, of course, Leeor was like “man, I can’t sign like five new artists in a week, the label’s already packed!” haha. But I think it sort of lined up perfectly with this idea that Leeor had in the back of his mind already, the artist curated compilation thing and the continuation of the Up Too Early series.

What was your vision for the second installment?

Somni: I definitely drew a lot of inspiration from the first installment that Leeor put together, and I think I sort of tried to internalize the feeling of those weird twilight hours of the morning, that kind of quiet calm when you know most of the city is still sleeping, but for whatever reason you’re awake. Something that people can put on when the sun is coming up, birds start chirping, the world seems like it’s about to sort of kick into gear—there’s definitely a certain vibe to it. What really tied the whole thing together for me were the Man Mantis visuals/artwork, he has this incredible way of creating a whole cohesive visual world around a set of songs that just blows my mind every time. Dude is so talented.

Are these all new tracks? What led them to be selected?

Somni, it looks like you worked with a lot of different artists on Part 2. Was that a direction you purposefully wanted to pursue or was this more of an opportunity to work with respected friends/peers? Or was it something else entirely?

Somni: It wasn’t really a planned thing, I was originally only aiming to do like one solo track and then maybe one collab. But my friends kept sending me ideas that just set off the inspiration in me, like the Surfer Dave and Duren ones were both half-finished ideas they were running by me to see if they were getting the vibe right for the project. And I immediately just started hearing layers I wanted to add on top of them, haha, so I was like please, please lemme get those stems! I guess the project turned out to be a fun opportunity to bounce ideas around with good friends in a way that maybe wouldn’t have happened otherwise. Usually when I’m working on a solo record, I get really introverted and don’t share a lot of my ideas with people until they’re really developed or whatever, so it was nice to switch from that mindset for a bit and be more open and collaborative.

At the risk of upsetting somebody, any favorite tracks on either of these?

Somni: I love ’em all, definitely the Omari Jazz x Meridian “On Some Moon” stuck out to me, when they first sent me the demo for that one, I was blown away, like, “are you sure???” It was also a big moment for me hearing that Soosh track, “Tranquil Dawn.” I’ve been a big fan of his for a long, long time, his earlier EPs, Colour is Breathe LP and the Memoosh project were on heavy rotation for me back in the day, and he hasn’t put much out since. Hearing that tune was like a breath of fresh air, it’s really dope to hear how his sound has developed since those days.

Realizing we’re here in part to celebrate the second edition, any thoughts/desires on who might be heading up any future Up Too Early comps?

Leeor: We have so many great team members at the label and friends I’d love to reach out to. Realistically, we’re shooting for one or two a year moving forward!

What’s the one thing you want listeners to take away from Up Too Early?

Somni: I just want people to have something nice to listen to, and maybe discover some new artists while they’re at it! Everyone on this thing is so damn talented, I’m really proud of how it turned out.

Leeor: Agreed. I made the playlist and comp just because it’s something I personally wanted to hear. Now, I just hope people enjoy what we’re doing and keep coming back.

Anything we haven’t discussed that you’d like to mention?

Somni: Please make sure to hype Man Mantis who made all the artwork and animations for UTE Vol. 2!

Leeor: We just recently opened up submissions for the playlist and am actually listening to everything coming in. Would love for people to submit their new music that’s fitting.

#DXCLUSIVE: Rucci Parties With AzChike In "Function In The Hood" Video

Questlove is Making The Sly Stone Documentary We Deserve