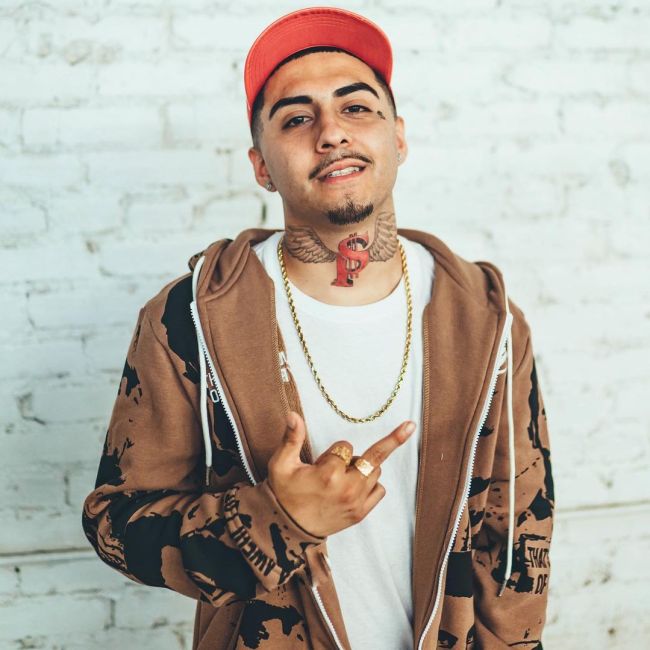 MoneySign $uede missed an important milestone while locked up in county jail earlier this year. A single he released prior to getting incarcerated became the first song of his to get more than a million views on Youtube. The video for “Back To The Bag,” begins with a shirtless $uede posing in a burnt-out cul-de-sac, showing off a pair of symmetrical bicep tattoos; one says LA, the other says HP. He doesn’t look a day older than 18 and has drawn comparisons to Kodak Black, with some fans bestowing him the nickname “Kodak Brown.”

$uede comes from a region of in-land LA referred to as a “corridor of corruption.” Huntington Park, specifically, made national news last year for being named the most miserable place to live in California and the tenth-most miserable place to live in the entire country. Just last month, a majority of Huntington Park’s finance department was placed on leave and escorted from City Hall after a budget analyst was arrested for breaching confidential records. The city boasts a large immigrant population who harbor an understandably cautious relationship to city police that rarely have their best interest in mind.

In 2014, Kodak Black was a 17 years old with a successful mixtape and enough life experience to bolster the strangely intimate tales woven into his music. Since then, there’s been a number of Kodak imitators attempting to capture lightning in a bottle the same way he did. The most successful attempts have thus far been from Florida, like Sniper Gang’s Jackboy and 438 Tok, who have managed to build on Kodak’s signature sound. Other imitators have sounded like cheap knock offs, going so far as to get their own Wicks, which is the name of the hairstyle popularized by Kodak that makes him kind of look like he’s being electrocuted.

$uede on the other hand, is about as unlikely a Kodak disciple as they come. The Mexican-American rapper is from the complete opposite side of the country and has never traveled outside of California. It’s a testament to the impact of Kodak’s sound that someone like $uede exists. But there’s plenty to like aside from the Kodak comparisons. He’s one of my favorite artists right now because he sounds extremely LA, merging Kodak to the New West with a working class Mexican kid influence.

Instead of going to high school, $uede got a job working construction at age 14, although he’ll admit he wasn’t too cut out for that either. He’s spent the past few years in the streets of Huntington Park or in jail. He’s currently on probation, hoping his music will be the ticket out of the cyclical hell that is the Los Angeles County jail system. A cycle he’s all too familiar with. “I don’t want no love that I didn’t get before the fame, that I didn’t get when I was arraigned,” $uede raps on “Too Late,” sounding much like Kodak would saying the word “arraigned.” The production, handled by $uede regulars Palaze and Lucig, features a subtle keyboard loop that helps elevate $uede’s musings on county jail and fake love.

A collage of gun-toting kids who don’t look a day older than 15 can be seen hyping up $uede in almost every one of his videos, a good reminder that he’s only 20 years old. It’s a fact that’s easy to overlook based purely off the music. In “Veteran,” featuring Bravo the BagChaser, $uede sounds more like a jaded old timer than a curious young man. “I’ve been done grimy and it’s turned me to a demon, I’ve been in situations you wouldn’t want to be in,” and there’s a subtleness to the way he extrapolates the saddest moments of his days, straddling the fence between threatening and pure jubilance.

$uede comes from a long line of Angeleno Latin rappers, including most recently Ohgeesy, but there’s something unique about the artist as a whole package that easily thrusts him into conversations discussing the best qualities of the New West. He’s set himself apart from other rappers by having a distinct sound that couldn’t have emerged from anywhere but Huntington Park.

Hopefully, $uede can avoid the early-career trappings that kept Kodak locked up for a majority of his rise. $uede spoke with me over the phone in June about two weeks after getting out of jail this last time. He was excited about a deal he’s signed with Atlantic Records and said he had over 100 finished songs in the vault. – Donald Morrison

I’m new to LA. Can you tell me a little about Huntington Park from your perspective?

$uede: It’s just regular LA shit, it’s not that big, just a little city right next to South Central. I moved here when I was nine.

What was it like growing up and going to school in HP?

$uede: I didn’t really like school, I dropped out and said fuck it. I’ve always been working though. I started working construction when I was 15. I was getting paid good too because I started early, but fuck all that shit man.

What was the first thing you did after getting out of jail?

$uede: I went and saw my family in HP. I Still stay over there and all my people are over there.

Do you have family in Mexico?

$uede: Yeah I do but I don’t really talk to them a lot. I’ve never been either but I’m really trying to get over there. People be tripping on me too, telling me not to go or that if I visit I’ll get snatched up or something, but fuck that I’m trying to go. I haven’t been to too many places. Like, the furthest I’ve been in California is Fresno and I’ve been to vegas and shit.

Now that I’m fresh out I’m trying to go everywhere, you feel me? Oregon, all that shit. I’m trying to go to places I’ve never been to, travel, and get on a plane for the first time. I have a lot of places I want to go.

Your video for “No Cap Freestyle” from 2019 was the first song of yours to really blow up. How did that video come about?

$uede: That was the first video I ever recorded. I made music before then but never a video. I hit up the homie Kevin Mora and he was with it, so he shot it. At the time it wasn’t even doing that good. It was out for nine months and was only at like 12K views. Then I dropped “Back To The Bag” and that shit went up.

Did you drop “Back to the Bag” before you went to jail?

$uede: It was about two months before I got locked up this last time. That shit hit a million views while I was locked up. That shit was crazy.

What was it like blowing up while being in jail?

How were you able to connect with Lil Weirdo for “She Gon Choose?”

$uede: He tapped in on Instagram and people were saying he’s one of the best Mexican rappers and shit. He goes hard, so I hit him up and said that I’m with it. I sent him the song and a few verses and then we did the video and it was a wrap. The video is doing good, everyone’s fucking with it. He’s a good person too.

Do you listen to a lot of Mexican American rappers?

$uede: Not really, but right now we’re going up though. We got Bravo the BagChaser, Oh Geesy, Lil Weirdo, Peysoh. I want to blow up too.

What was it like growing up in a big family with five sisters?

$uede: It’s a huge family because all my sisters already have kids. Each one has something like three, four or five kids. I got all sorts of nephews and nieces and shit. I still see my people every day.

What’s it been like since getting out of jail? Have you been able to really focus on making music?

$uede: For the first week or so I was just with my people and with my lady, I wasn’t even trying to worry about music or social media or any of that shit. I was just trying to get adjusted back to reality and shit.

Then I started to get to it, you know? Trying to figure out what I’m going to drop next or if I should release a little project.

They got you on any kind of supervised release or anything?

$uede: I’m on parole for three years. I can’t even leave further than 50 miles from my house or something. It’s some bullshit. Fuck probation and fuck parole, all that shit.

Can you talk a little about your deal with Atlanta Records and how that came about?

$uede: An A&R had reached out to me on Instagram. When I first saw the message and read “Atlantic Records” I didn’t take it seriously. I was like, nah, we from the streets, I can’t imagine shit like that, you feel me? I acted like I didn’t even see the message. I didn’t even reply for like five days. All the homies were like “hey, you gotta reply to them,” and I finally did. Shout out to the Atlantic Family.

Is there an Atlantic office in Los Angeles that you’ve been able to go to since getting signed or has it all been handled remote?

$uede: I haven’t been to an office or anything, but I’m going to see what’s up with that. I need to pull up.

Do you have any plans for an EP or an album? Or will you just keep dropping singles?

$uede: We want to drop a little project for sure. We have like 100 unreleased songs and shit. We have enough for like three or four projects, easy. Might be dropping one called Parkside Baby soon.

What do you make of the Kodak Black comparisons?

$uede: That shit makes me laugh, on God. I’ve listened to Kodak every day since I was 15. He’s my favorite rapper and shit. I don’t even try and sound like him, but he definitely influenced my music. I don’t really get into the whole rapper thing. I don’t look up to a lot of rappers, but Kodak is one of them. Gucci Mane is hard too. I fuck with Gucci becasue he put a lot of people on too.

Is there anybody you’d like to work with or features you’ve been eyeing?

$uede: Not really. If a rapper wants to work and hits me up, we’re going to work, no doubt. But am I just thinking about people I want to work with? I can’t really think of anybody. I’m just trying to make a lane for myself first before I try to work with any bigger artists. I’m trying to work hard and make it for real.