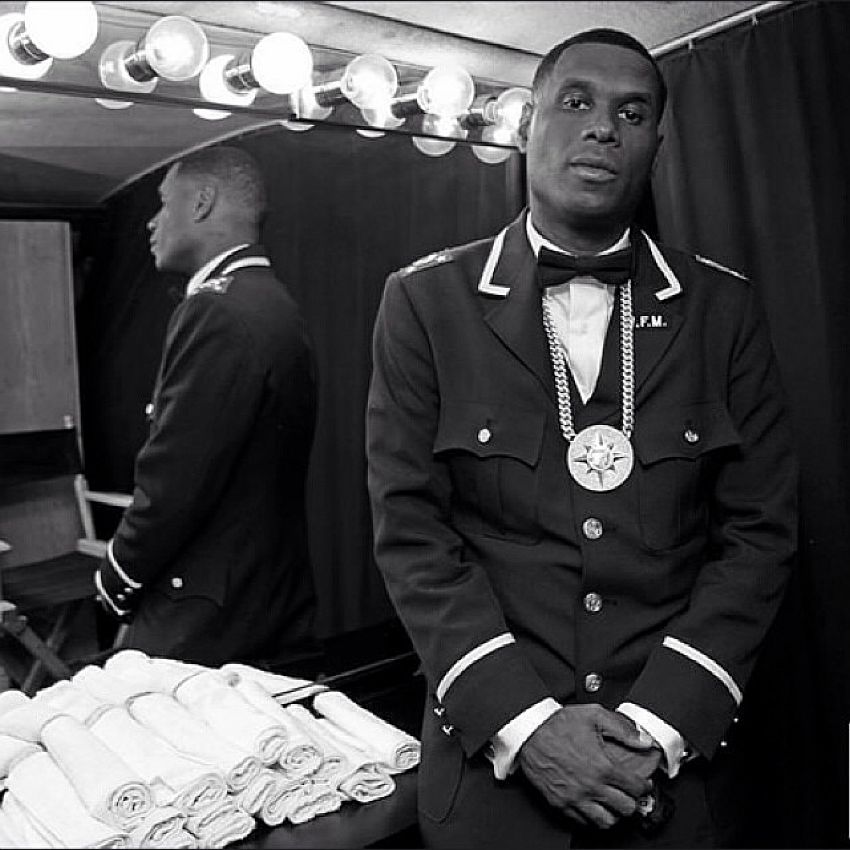 Please support the last real independent rap blog standing by subscribing to Passion of the Weiss on Patreon.

It was Friday night, February 19th 2010, when Jay Electronica pulled the full, delirious crowd of Amsterdam’s Sugar Factory onto the stage, to join him in his performance of “Exhibit C.” That is, almost the full crowd, since after a brief moment of doubt, I decided to remain on the balcony to fully take in the glorious spectacle unfolding below.

Here was the new Rakim, Nas and Jay-Z rolled into a single entity. He repped New Orleans’ Third Ward Slum while rapping about the time he was homeless, drifting through New York. His distance to rap materialism and penchant for spirituality immediately set him apart from many of his peers. And the way in which he married the then already dominant south and hiphop’s New York roots into the same person, made him a great unifier amongst all who heard him. Add to that the fact he came up through posting tracks on Myspace during what would retrospectively become known as the ‘blog era’. It was a time in which the power of major label marketing machines seemed broken by a small army of online rap connaisseurs and mixtape DJ’s. And Jay Electronica felt like the culmination of it. As if all those years had been working towards this point. It was history in the making, and we were there to witness.

After an absolutely raucous half hour, the man of the hour leisurely made the rounds through his audience, who circled around him like apostles whose messiah has just been revealed to them. I dapped him up, and told him not to worry about the people asking what was keeping his debut album. That I appreciated what he did, and that hiphop what eventually be thankful, precisely because he was taking the time it needed.

How very, very wrong a person can possibly be.

Act I: How It Began

Jay Electronica recorded his first major feat Act I: Eternal Sunshine (The Pledge) to a selection of drumless loops taken from Jon Brion’s soundtrack to the film Eternal Sunshine of the Spotless Mind. The tape had been made utilizing the internal mic of his laptop and counted only fifteen minutes, but somehow also featured glowing recommendations from luminaries Erykah Badu and Just Blaze. Even more noticeable though, was his calm, self-assured flow, and the somewhat melancholy mood of it all. It felt different, and grand at the same time. In following years, several loosies would pop up online, ultimately collected in the popular 2009 mixtape What The Fuck Is A Jay Electronica?, which furthered the hype.

The promise closely inched towards fulfillment in December of the same year in the form of “Exhibit C.” The impact of the track produced by Just Blaze on hip-hop’s landscape is hard to overstate; the term ‘hit record’ would not remotely do it justice. There is nary a rap fan older than 25 who cannot rap along to the song. Everybody and their mom hijacked the instrumental for an unofficial remix, and still no one came close to “Jay ElecHannukah, Jay ElecYarmulke, Jay ElectRamadaan, Muhammad Asalaamica, RasoulAllah Subhanahu wa ta’ala through your monitor.” If a single track could provide both the scorching, all-consuming blaze and fruitful aftermath of a volcanic eruption, what could an entire album by Jay Elec do?

That it would take this long for Act II: The Patents of Nobility (the Turn) to reach ears, seemed unthinkable at that point. In 2010 Jay Elec signed a deal with the company of that other renowned Jay: Roc Nation. It only happened after both Jigga and Puff had been embroiled in a heated bidding war for the right to add him to their respective teams. The fact it still hadn’t died down when he finally posted a screenshot of the album’s tracklist and said he had turned in the album two years later, is testament to how big the hype over it was.

Jay Electronica’s project titles promised a trilogy inspired by writer Christopher Priest’s The Prestige, in which the three acts of a magic trick are defined. First is “The Pledge,” in which a simple object is offered up for inspection to confirm its inconspicuousness. Second is “The Pledge,” in which something extraordinary happens to the object, and third is ‘The Prestige’, in which the trick reaches its finale. “Because making something disappear isn’t enough; you have to bring it back. That’s why every magic trick has a third act, the hardest part, the part we call “The Prestige.”

Exactly why Jay Electronica let the prestige slip through his fingers, and ultimately made his album disappear in full, remains guesswork. It probably had something to do with the enormous, practically insurmountable pressure of delivering upon his pledge. The unfulfilled promise of delivering his second act, eventually turned Jay Electronica from a messiah to a punchline in rap. “I actually tried to block this from coming out”, he said on Twitter, “but Allah is the best of planners.”

Now, after eight years, in a totally unexpected turn of events, the album is suddenly here. Jay Elec had actually turned it in to the label like he said did, because a digital copy of it was floating around on a server. A server that was hacked, after which the hackers decided to ransom the files for an amount supposed five figures strong. A group of fans pooled their money and collectively ponied it up, and voila; ‘The Turn’ suddenly turned up in the less than legal corners of the web, after which it spread like wildfire.

Earlier this year, Jay Electronics surprised everyone by actually releasing what is now his official debut album. But A Written Testimony turned out to be a duo album with Jay-Z. Aside from their earlier collaboration “Shiny Suit Theory,” the record had nothing to do with his solo debut. It was a perfectly fine project, good even. Yet, to remaining acolytes who were still clamoring for his debut after all these years, the pang of disappointment remained. No matter how good this album was, it was not the exalted moment wafting of frankincense built up towards so dramatically in 2012. After a week, barely a soul was still talking about A Written Testimony.

How different its reception could have been, if Act II would actually have dropped eight years ago. Because it’s hard to imagine the album we are now hearing, not delivering upon the humongous expectations fans projected upon it back then. “I was born on Tatooine with dreams of sand,” Jay Electronica raps on “Letter To Falon,” referring to Luke Skywalker, the focal point of the original Star Wars trilogy. A regular shmegular farmboy, who has never asked to be the chosen one, but had the role thrust upon him nonetheless. It was a mantle he carried lovingly and admirably, until it eventually did become too heavy to bear. And just like Jay Electronica, he disappeared for years, only to be pulled back onto the battlefield by circumstances beyond his control.

It’s impossible Jay Elec could have fully foreseen that parallel back in 2012, but it does add even more weight to his many raps pregnant with myth-making. On “Real Magic,” he opens the album with a fragment of a speech by Ronald Reagan, in which the former president talks about humanity’s upcoming “rendez-vous with destiny.” Jay Elec follows it with a verse about losing his connection to the magic of everyday existence through the distraction of technology: “And just like that I forgot all of the trees / And the flowers and the breeze carryin’ seeds across the seas / Extra honey in my tea, but pay no to homage to the bee.”

It’s a beautifully worded message whose relevance has only increased since, rapped with a sense of comfort and ease. The fact that the man behind this self-assured tone turned out to be far less assured, and might not have picked the role of chosen one for himself after all, doesn’t do anything to negate the sharpness of his pen. It’s a talent he employs as deftly as he does sparingly over the course of the album’s fifty minutes. On the minute-and-a-half ‘Life On Mars’ takes, he gives the same melody from Wee’s ‘Aeroplane (Reprise)’ that would form the base of Kanye’s ‘Bound 2’ all the space it needs to breathe. By adding only a single verse to it, every word of it only gains in heft.

“Bonnie and Clyde,” based on a Serge Gainsbourg and Brigitte Bardot sample, feels just as pleasantly airy. The instrumental parts have been stretched to provide a bed for his verses, but the original track remains largely intact. It’s reminiscent of what Ghostface did to some soul classics on Pretty Toney, but dialed back a notch or ten in manic intensity. The track is followed by ‘Dinner at Tiffany’s’, in which the host himself ins’t even Heard at all, and Charlotte Gainsbourg delivers all vocals. It bleeds into “Shiny Suit Theory,” the Jay-Z collaboration that features on their joint album too, but fits so seamlessly into the whole of this album, you’d almost be prone to forget that.

Maybe an album like Act II: The Patents of Nobility (the Turn) is more of an acquired taste in 2020 than it would’ve been in 2012, when all the stars seemed to have aligned for Jay Electronica. But its overwhelmingly glowing reception on social media proves his reasonable doubt needn’t have been. Every other rapper tackling his themes would have probably fell into a quasi-religious and fairly ridiculous spectacle, but by sounding equally searching for answers and knowledgeable, his esoteric raps and philosophical quests remain engrossing to the listener.

Being hacked and having an old, scrapped album dumped onto the web, must be one of the worst possible ways an artist can have his music released. Jay Electronica mostly seemed moved by the enthusiasm with which his work has been received over the weekend though. “Y’all got me over here crying,” he tweeted in a now largely deleted series of messages. “Humbled by the love it’s receiving. Thank you all so much. All praises due to Allah.”

It actually convinced him to send the label another message. This time, not to block its release, but to finally publish it officially. “Please be patient with us, we are working to clear samples and have this up on Tidal asap. Thank you all.” Hopefully that process won’t take another eight years. Hearing how The Turn actually delivers on its promise after all these years still, is a trick shattering all known laws of the rap game. Now that’s real magic.

Interview: JoJo Hailey On Recording ‘How Do You Want It’ With 2Pac & ‘Special’ Solo Venture