No one at this site has a Chinchilla coat. Please help make that a reality by donating to the Patreon.

The D.A. and Sheriff’s Department dreamed about locking up Drakeo for the remainder of his natural life, but they always knew that failure could still mean victory. To be at war with the state is to understand that time is weaponized against you. There are infinite resources and sadistic technicalities to seal your fate. Even the wealthy can be bled to bankruptcy via hundreds of thousands in legal fees. If the jury hangs, you might only be able to afford a public defender for the retrial, which can sign your death letter. Even if you win and freely walk out the cage, you’ve likely been forced to sell all your assets and wind up worth little more than the jumpsuit on your back.

If you’re a rapper, the stakes are amplified. Your window to capitalize on fleeting styles and migratory fans is extremely limited. You can beat the case only to come home and be rendered obsolete. The style of beats you rapped over seems stale. Your influence has mutated beyond you and your slang is dated. Despite your legendary status, the streets may not want to hear conceptual opuses about your seasons in hell. Boosie skated on a murder rap, rotted a half-decade in the pen, and was still just 31 when he dropped Life After Deathrow. Yet when I visited Baton Rouge barely two years after his release, they exclusively bumped Kevin Gates, Youngboy, and Gee Money. I’ll ride eternally for his post-Angola catalogue, but everyone I interviewed said that the new music didn’t hit like the canonized ghetto stories.

The carceral system has spent centuries perfecting medieval tortures to break your soul and spirit. Creativity decays when your senses are deprived and the only view is steel, cinderblock, and the human inferno. Verses scratched behind bars often wind up discarded. The rhythms are stiff and dissonant, the words overly repetitive. From there, it can takes months in the studio to regain equilibrium. But the moment of true excitement has passed. The only promises in life are death, taxes, and the Internet moving on.

Even if you’re unbreakable enough to survive the gulag, any smut on your name can desecrate a legacy. Tekashi still racks up streams out of goofball curiosity, but even if he made the next Get Rich or Die Tryin,’ he’d forever remain a rainbow-haired rodent meme. If you somehow avoid all these pitfalls, the specter of recidivism looms. The parole system is built to perpetuate the cycle. You can’t carry a gun to protect yourself in violent neighborhoods; if the state deems you a gang member, an Instagram picture alongside friends from your block can trigger more jail time. That doesn’t even encompass the “wrong place wrong time” scenarios that arise from being a famous and wealthy target constantly being tested. This is how they win.

These long odds confronted Drakeo as stepped outside of the Compton Courthouse on November 4th. A free man finally…after nearly three years of degradation, isolation, and other state-sanctioned horrors. The Gucci turtleneck, chains, and stacks of cash waited for him in the parking lot across the street, but momentarily, his possessions amounted to a trash bag of legal arcana, fan letters that sustained him during the low ebbs, and 200-plus songs scrawled in notepads. Within two hours, he was at the studio. In another 30 minutes, he’d recorded “Fights Don’t Matter,” a semi-automatic fusillade of Paisa dances with the plug and Jet Li kicks leaving blood on his Boosie fade. Corpses in the street clutching iPhone 7s and coupes spraying banana peels like Mario Kart.

For the last 34 months, Drakeo had little to do but watch TV, study the itemized racism of the California penal code, read whatever books slipped past MCJ’s heavy censors, and write raps. Nearly every phone conversation found him excitedly spitting his latest verse, punctuated by the automated “Thank You For Using GTL” drops. His dedication to his art was one of the few things to preserve his sanity. What was lost (or willfully ignored) by the District Attorney was the hilarity. For someone subjected to the most inhumane treatment imaginable, most interactions involved the same scorched earth shit talking found in his catalogue. The embodiment of the Adorno quote “there is laughter because there is nothing to laugh at.”

What’s most striking about We Know The Truth is how funny it is. In the history of rap, only Pimp C and Mac Dre came out this hard and with their sense of humor so intact. I’m supposed to disclose my bias, but you should already know the truth. If Drakeo isn’t the best rapper alive right now, he’s easily in the Top 5. There were a million different ways this could have gone. Over the last three years, dozens of solo rappers and groups took turns vying for the throne of Los Angeles. After Drakeo’s January 2018 arrest, Greedo was poised to put the city on his back until the Texas prison system condemned him to a panhandle Gehenna. You can justifiably argue that Kendrick remains king, but he’s a Coachella-headlining international superstar. I’m referring to something entirely different.

The demonic and jittery nervous music created by Drakeo became the default preset of the West Coast street. In Sacramento, the deeply mourned Bris was the rare exception, reimagining the sound beyond Drakeo’s long shadow (even if he paid homage by rapping about Mei Ling and flu flamming.) The rest of the competition amount to the Robitussin to the Cold Devil’s Actavis. Fortunately, he returned home as the world finally caught up to the singular and imitated pace and cadence. A deliberate mudwalk, subterranean pockets drilled into the beat, scraping against the rhythm like a jazz drummer’s brush. The mumbled voice, a sleepless hemlock croak, melting into the minor chords. A new rap language like Tony Starks or 40 Water, a weird badlands of Sideshow Bob allusions and blood-soaked Neiman-Marcus bags, rechristened extendo clips and coded threats that you would’ve had to come to court to be able to fully unpack.

The music functions on two levels. It is hypothermic gangsta rap, a sinister cul-de-sac of dead bodies and Balenciaga’s, sneering condescension and flatlined pulses. The rightful lineage of Eazy and Cube, Snoop and Kurupt, Mac Dre, Gucci, and Lil Boosie. But repeat listens reveal how the careful and meticulously writing, laced with double entendres, referential callbacks, deadpan absurdity, and bizarre subtlety. Bodies are “Randy Mossed.” Instagram will leave you stretched in the intersection. Classic L.A. noir, Walter Mosley from 76th and Central passing the torch to Mr. Mosely, raised thirty blocks south. A rewind value on par with your preferred abstractionist from woods to Jay Elect. It’s why Danny Brown said Drakeo was his favorite rapper, and Earl committed arson to “Ion Rap Beef.” 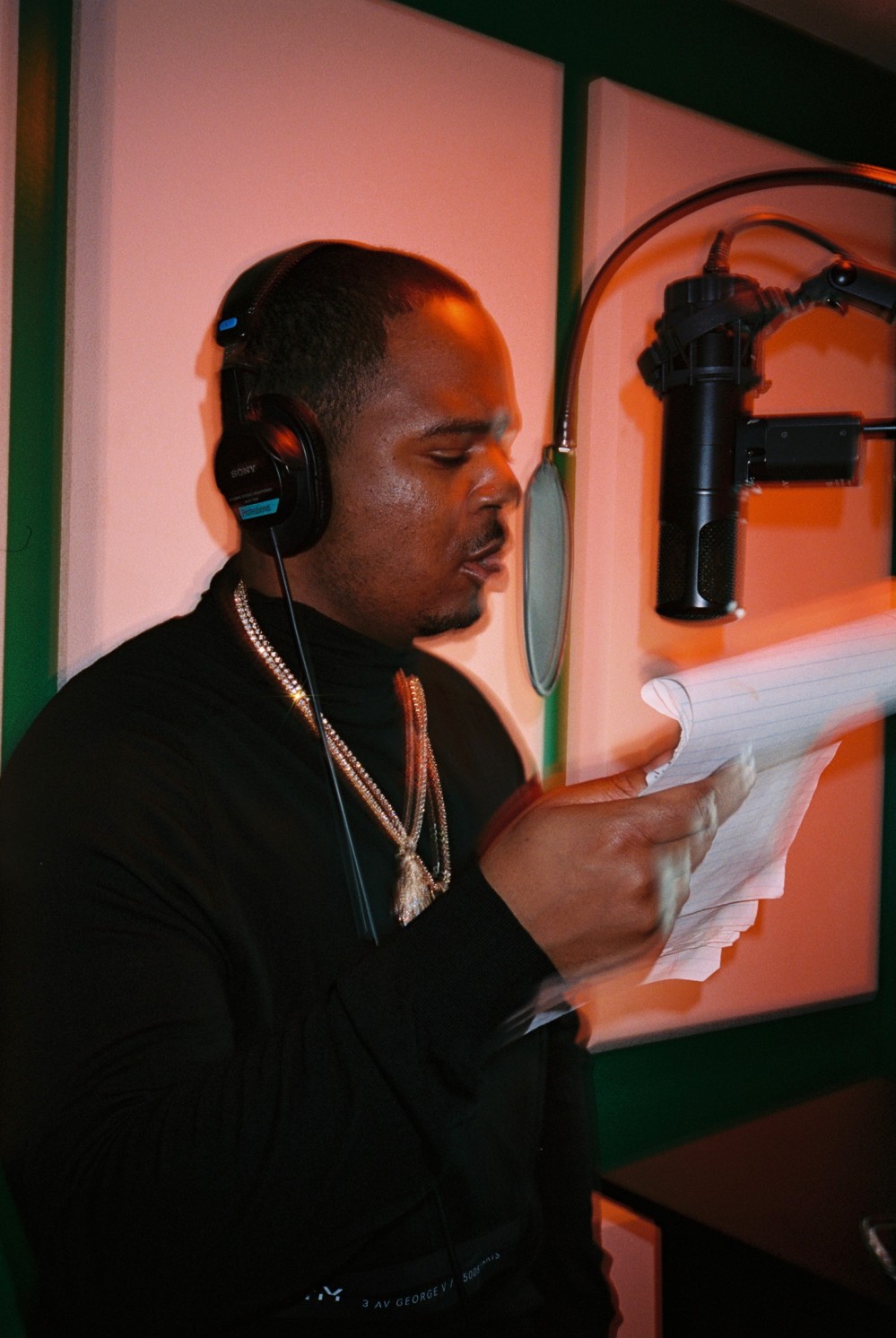 The concision and economy recalls Prodigy’s most cold blooded openers: “I had an altercation with a bully, I had to flatline him/I was only out nine days, they had me back violent;” “Three years ago, I wasn’t able to do this/I was in the county arguing with my jeweler;” “N**as always talking nerd shit, it disgusts me.” Like Drake, half his lyrics are ideal Instagram captions, but unlike Drake, it doesn’t make you want to block the person posting them. Thus, the slyly taunting “Captions” where he alternates between chinchilla coats and not guilty flashbacks, a triple-stacked King of the Hill reference and allusions to his best friend Rassy Bugatti, left behind in the cage, fighting a half-century sentence for a third strike violation.

The drum beat of the last three years thumps in the background. Instead of linear storytelling, the emotions and circumstances play out in dark asides. Calls from County that weren’t accepted. Letters never mailed. The conspiratorial detectives who nearly made him quit rapping. A rap trope like “gang in this bitch” is followed by “that’s a group of three or more people,” underscoring the antiquated statutes wielded against The Stinc Team, now considered a criminal street gang in the state of California. A hook about topping Lil Boosie. On the closest thing to a pop bid — a collab with Lil Mosey — Drakeo numbly intones: “if you been where I’ve been you’d be traumatized….Why you carrying a gun? I’ve been shot at twice. You know Tuesdays and Thursdays it’s hot outside.”

The pain is never far away, but it’s medicated. The masks are both figurative and literal — a Louis Vuitton face covering is given as a present for the hitman. “Mardi Gras” could go up in a Bourbon Street club, but its lyrics petition for a truce after someone’s best friend winds up in a body bag. To be a fan of Drakeo’s music is to understand it as an exercise of world building. In the same way that E-40 invented his own lexicon, Drakeo brings back his own catch phrases (“Backseat Bandits,” “Blamped,” “10 chains,)” but continually adds onto it. Hundreds become Hundiddies. Guns become Stifflers because three years in the dungeon will give you time to meditate on the American Pie trilogy.

The usual suspects shine: The Stinc Team, Desto Dubb, and AllBlack demolish their 16s. In a new twist, Drakeo slides effortlessly into the Michigan rap world that dominated most of his listening over the last year. The standout is “John Madden,” where the Caldwell brothers join Flint’s Rio Da Yung OG and RMC Mike for the most savage bell-ringing assault this side of “Wack Jumper.” The vastly improved Lil Yachty glides so smoothly they ought to give him Pistons seasons tickets.

Behind the boards, the pace of nervous music seems accelerated and advanced. A woozy psychedelia conjured by Fizzle, Al. B. Smoove, Joog SZN, Bruce 24K, Beat Boy, and more. It feels uniform, selected to fit the ominous heart of darkness, but infused with enough bounce to match the album’s levity. This is the inherent duality of L.A. itself, noir and light. A chopper spraying in the sparkling sun, a foreign whip crashed into a swaying palm tree.

For all the anger and frustration of songs written with the looming threat of life in prison, there is a streak of playfulness. One of the best moments of the record is the improvised looseness on “Punk Rock Bitch,” where Drakeo summons visions of slaughterhouses and modified glizzy’s, but then whispers into the microphone: “this is how you to talk shit to them.” You can almost see the smirk, the momentary knowledge that he won. But then he swiftly moves on to the next bar, never letting himself get too settled, all too aware of what’s in the rear view.