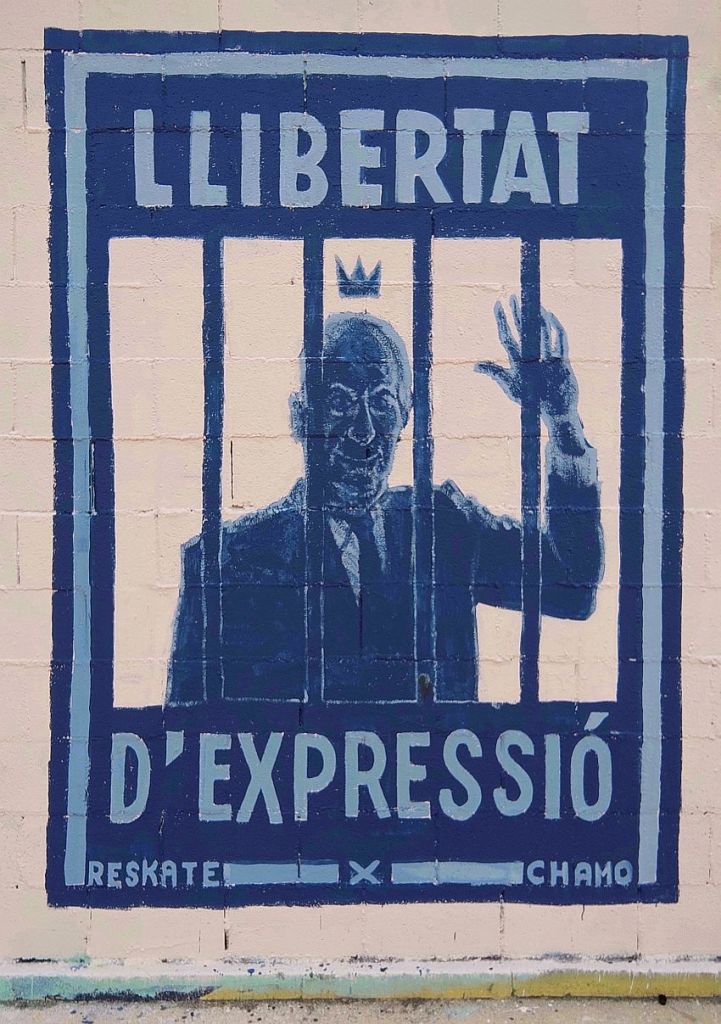 All photos by Fernando Alcalá Losa aka Fer Alcalá

Please support truly independent rap journalism by subscribing to (the entirely reader supported) Passion of the Weiss on Patreon.

Sit down if you want, Jaap van der Doelen stands up against oppression.

Riots in the streets of Barcelona, walls covered in protest murals, and a police force that barges into the oldest university in Catalunya. All because of Pablo Hasél, a 32-year old rapper imprisoned because of his writing. Whoever had this on his bingo-card of his insanity can tick off a box, thanks to the Spanish government. How could things ever get this far?

“They will have to kidnap me,” Spanish rapper Pablo Hasél tweeted al little over a week ago. “That will show the state for what it truly is: A sham democracy.” Hasél had barraged himself in the university of Lleida and refused to deliver himself to prison for the commencement of his sentence. He was convicted by the Spanish court for song lyrics and tweets in which he was supposedly supporting terrorism, along with insulting the Crown and state institutions.

Last Tuesday, February 16, the police gave heed to his call, and sent a force to take him out of the university. Hasél and his supporters put up a fight though, barricading the halls while spraying the arresting officers with fire extinguishers. That same night, the streets of Barcelona and many other Catalan cities, as well as Valencia filled with protesters. In these mass demonstrations, Pablo Hasél’s freedom was demanded, along with reforms of Spanish law curtailing the freedom of expression. Police met many of these protests with violence, and peace has not returned since.

According to Tristan Fleerkate, this civil unrest has been long in the making. “There’s an old poem, from far before the Spanish Civil War, titled Las Dos Españas,” he says. “It’s about the enormous distance between political progressives and conservatives that has been present in Spain since at least halfway the 19th century. You can seen this in the Spanish Civil War, but also in current society.” Fleerkate should know. After his Cultural Heritage studies at the Reinwardt Academie in Amsterdam, his specialization into the Spanish Civil War, led him to Spain’s capital city Madrid. There he lived for several years at the renowned Prado Museum and gave guided tours related to the war which erupted three years before World War II. 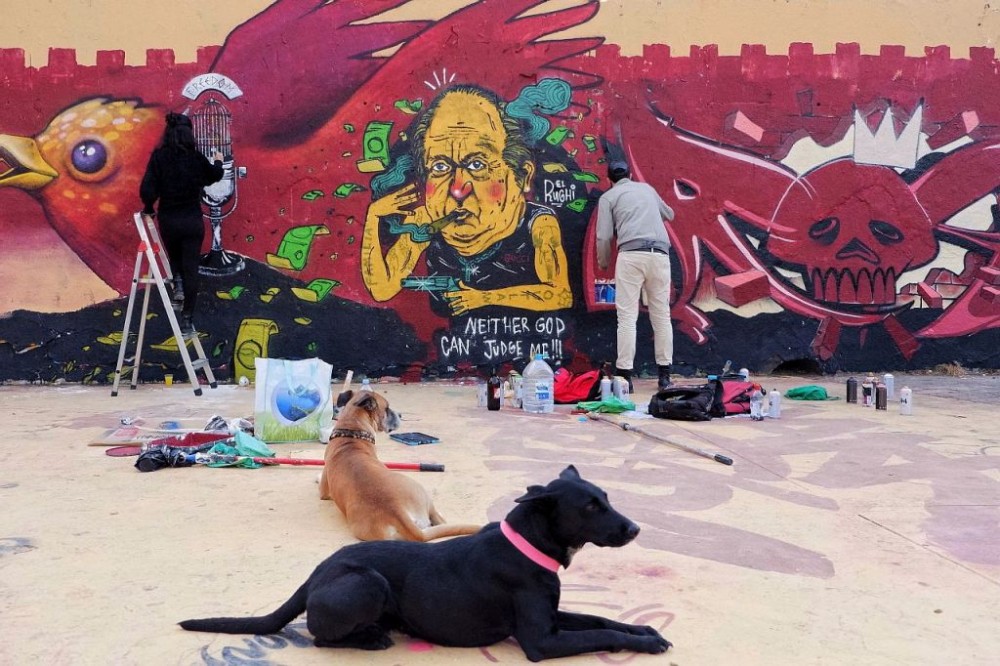 Spanish generals committed a military coup in their country, supported by nazi Germany and Mussolini’s Italy. General Franciso Franco eventually led the fascists to victory, and would remain in command as Spain’s dictator until his death in 1975. “During the Spanish Civil War, Franco promised that he would restore order and bring back the monarchy,” Fleerkate explains. “He couldn’t do this once he rose to power himself; he was a general, and a king would ultimately outrank him. So he waited until his dying bed to install Juan Carlos on the throne. As king, he could basically continue to rule similarly to Franco.”

“We have a fascist heritage in this country that has never disappeared,” says Ari Suari over the phone. The activist from the Spanish isle of Mallorca has been involved in the fight for increased freedom of speech in her country for years. When Mallorca rapper Valtònyc was sentenced to jail for his lyrics in 2018, she joined Pablo Hasél as they protested at the European Parliament, pleading the case for his freedom. “After that, I did many speeches with him in Barcelona, Madrid and Valencia, to reach as many people as we could. To bring the truth to the surface.”

Valtònyc was the first Spanish musician convicted for his songs since the Spanish dictatorship was officially dissolved. Like Carles Puigdemont, the former president of Catalunya who spearheaded a referendum in which the majority voted for independence from Spain, he escaped imprisonment by exiling himself to Belgium. The rapper has been living in Brussels since. “We were very active in the Valtònyc case, and are trying to reactivate that organization to focus it on Pablo, and the need for freedom of speech in general” Suari explains.

“Freedom of speech is covered for fascists and others on the right, but not for the left,” according to activist Suari. She points to a yearly memorial service honoring the Blue Division, a part of the German army in World War II consisting of Spanish volunteers, who fought alongside the nazis at the Russian front. “The enemy is always going to be the same albeit wearing different masks: the Jew”, one of the speeches given there stated, while hundreds raised their arm for the Nazi salute. 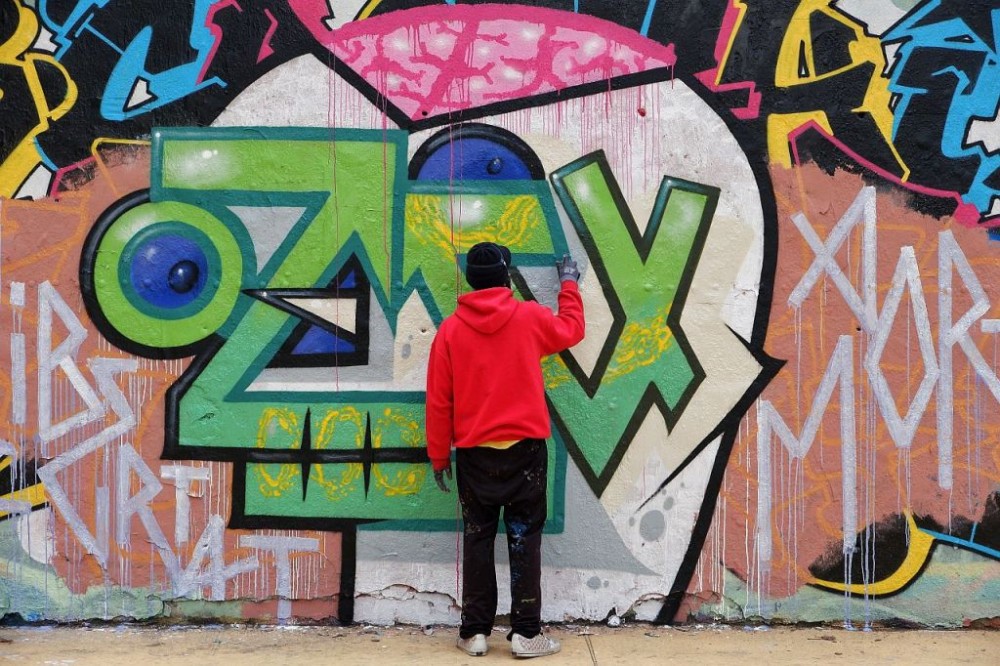 “It’s held every year, and every year they use anti-Semitic, racist and xenophobic rhetoric at this manifestation,” Suari knows. “This year, it was the day before Pablo was supposed to go to jail, so now it claimed the attention of the media, but normally they don’t even report on it. Nobody does anything. The police protects them.” The fact that Nazi sympathizers and aspiring fascists do get to claim the full breadth of freedom of speech, while other groups don’t, angers her. “If there is a limit to freedom of speech, it should be to protect marginalized people. Not the crown or the police. They already have all the power, guns and money. Who do they need to be protected against?”

The discrepancy was further underscored these past two weeks in Barcelona. A legally painted mural by artist Roc Blackblock featuring forming king Juan Carlos branded with the word ‘Ladron’ (thief) was painted over by municipal services within 24 hours. According the municipal government this was a mistake, but all other murals in the vicinity were left untouched. Despite all this, criticism of the royal family is far from rare. Mural artist Anna Maga had painted a crown, throwing the shadow of a large mosque, a way to visualize the strong ties between the royal families of Spain a Saudi-Arabia, and the shady arms deals and bribes passing between them. “In Spain and Catalunya the fascists are no longer hiding, they are showing their face”, she says about the need to protest. “Francoism has never left. It is the reason why we still have a monarchy.”

Last Sunday, a group of mural artists again created artworks as a form of peaceful protest at the same location where Roc Blackblock was buffed. All permits had been requested and granted beforehand, and the legal mural painting event was completely in accordance with local ordinances. A few days afterwards however, all murals were haphazardly vandalized in the night by a fascist group calling themselves ‘The Union of Brigades.’ They proudly spread video of their destruction to openly raise funds for their cause, including an email address for their Paypal account.

Several rappers from Catalunya have also been very vocal in their opposition to Juan Carlos de Borbon and his son Felipe, the current king. In 2018 they all came together for a posse track called ‘Los Borbones son unos Ladrones’ (The Borbons Are Thieves) to loudly demand more freedom of speech. And each night, people hit the streets to further strengthen that demand. So why have rappers like Valtònyc and Pablo Hasél been sentenced then?

“They’re people who are being thrown in front of the bus in hopes others will shut up and no longer dare to let themselves be heard,” Fleerkate thinks. He was at the final concert Valtònyc gave in his own country, and witnessed the impact it had on the audience. Pablo Hasél on the other hand, orchestrated to have his arrest take place in the moist dramatic way possible, precisely to embarrass the state. “It’s no coincidence he went to the university,” Suari explains. The Lleida university was founded in 1300 as the first of its kind in Catalunya. “The university represents freedom of thought, speech and ideology. That they had to enter it to get Pablo out and transport him to jail for his songs is insane. That image was a good way to show to the world what is happening here.” 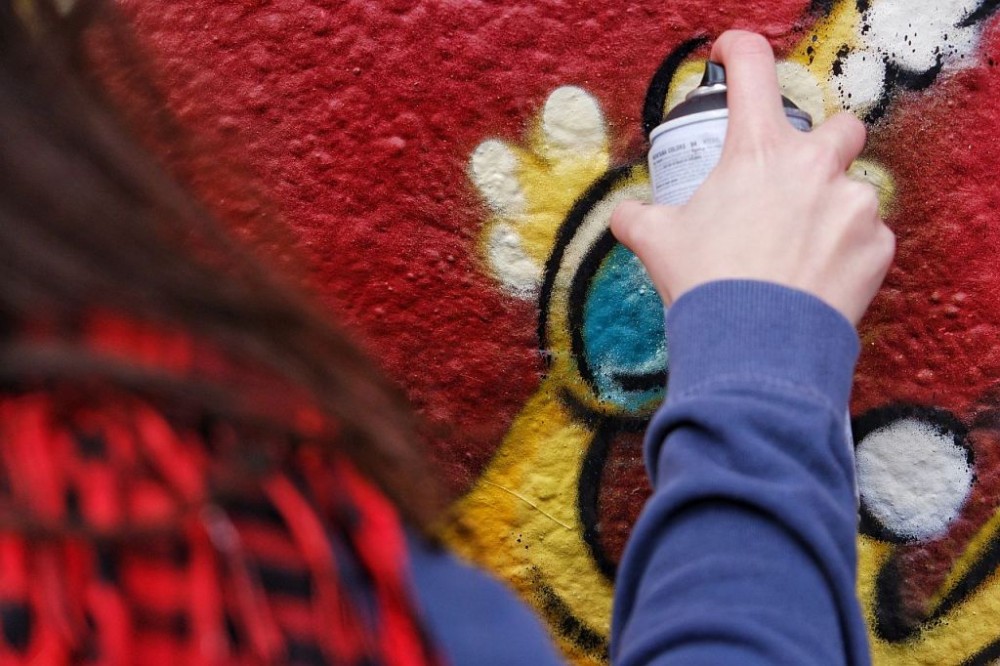 Hasél hasn’t just been imprisoned for his lyrics, his tweets also brought about the ire of the state. “And many of them were actually about police violence and a lack of accountability in that area,” Fleerkate explains. “One of those was used in the court case. He wrote that Joseba Arregi, a former commander of ETA, had been murdered by the police agents who tortured him. This is an historic fact, but him pointing it out was part of the evidence they used to claim he supported terrorism.”

Fleerkate notes that the militant lyrics of Pablo Hasél and Valtònyc leave little room for nuance. “It’s often quite rude. We don’t need to pretend these guys are two little angels.” But the punishment they’ve received for their crudeness is beyond measure, he believes. Human rights organization Amnesty agrees. “No one should face criminal prosecution only for expressing themselves on social media or for singing something that may be distasteful or shocking,” says Esteban Beltrán, head of Amnesty International in Spain.

Doubt has also risen about the impartiality of the judges in the cases against Pablo Hasél. One of them is Nicolás Poveda, an active member of the Falange, the political movement of general Franco. The people protesting against what they see as an unjust conviction, are often met with police violence. Last week, projectiles were fired at demonstrations. “A girl lost her eye, and people are worried about garbage cans burning.”

Pablo Hasél has been convicted for nine months. In Spain, prison sentences are not carried out when it is a first conviction and the sentence is under two years. But since Hasél has already been convicted for his lyrics, his earlier two year sentence will be added onto the current nine month conviction. There are political parties demanding his freedom and a restructuring of the law, but Suari has no confidence in the tempo with which they work.

“They are acting when a person is in jail, when hundreds of people have already been sentenced for offending the crown of the Catholic church. Support is arriving, but it is arriving very late. It is only because of ‘face washing’. When Valtònyc was exiled, they didn’t do anything. They could have presented propositions for revised laws then.” Suari believes it is mostly the embarrassment that spurs them into action now. “The news has spread about Pablo being the first rapper imprisoned for his songs. They are acting, because they are exposed.” 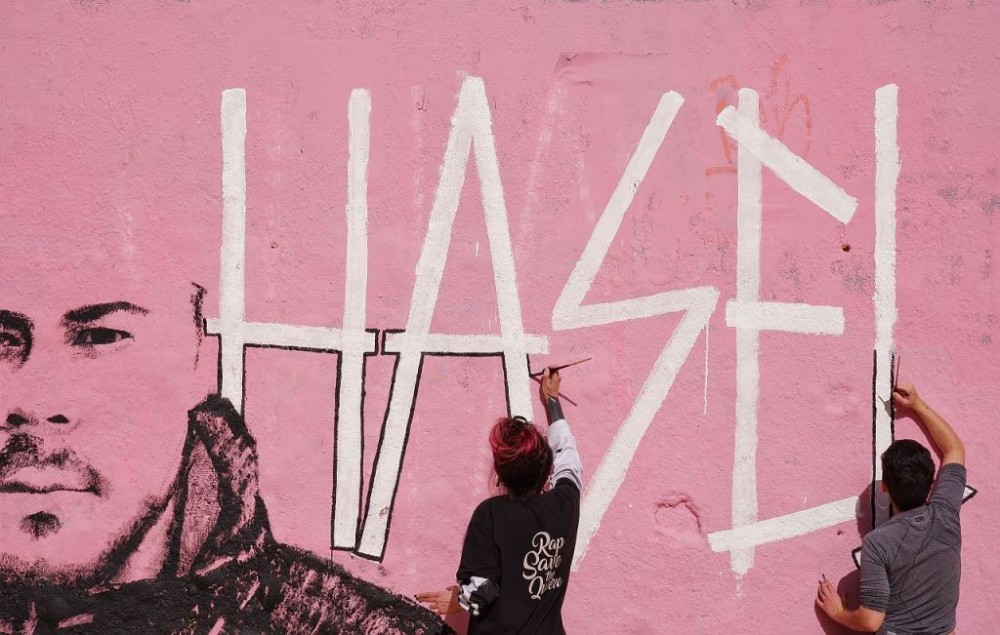 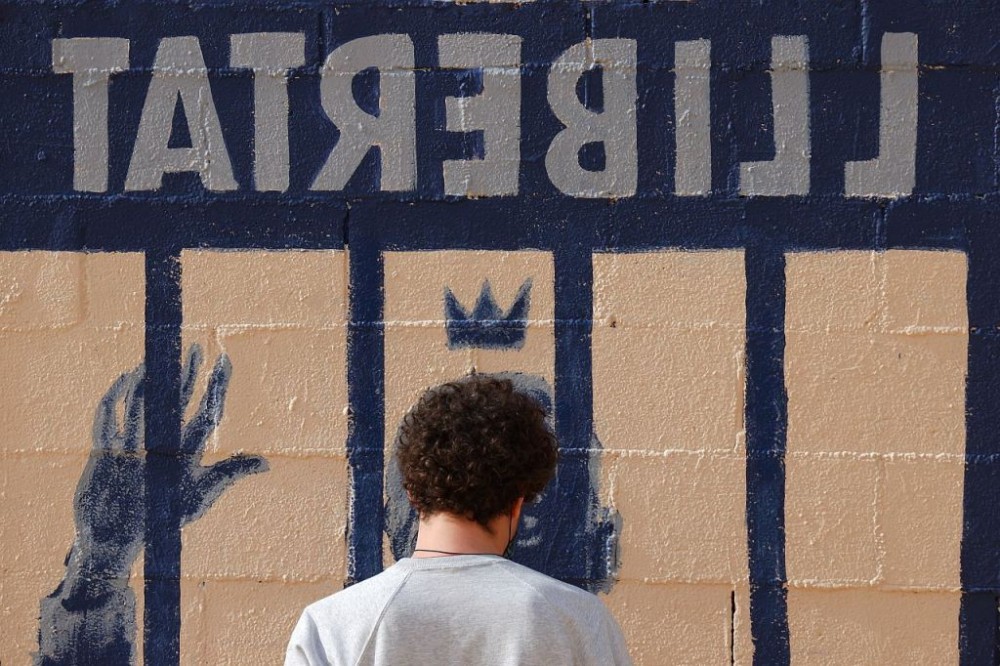 Lil Pump Refuses To Give Up Smoking Blunts At Gas Pumps

#DXCLUSIVE: Jordan Hollywood Finds Himself In A Warzone For "EXPLOSION" Video