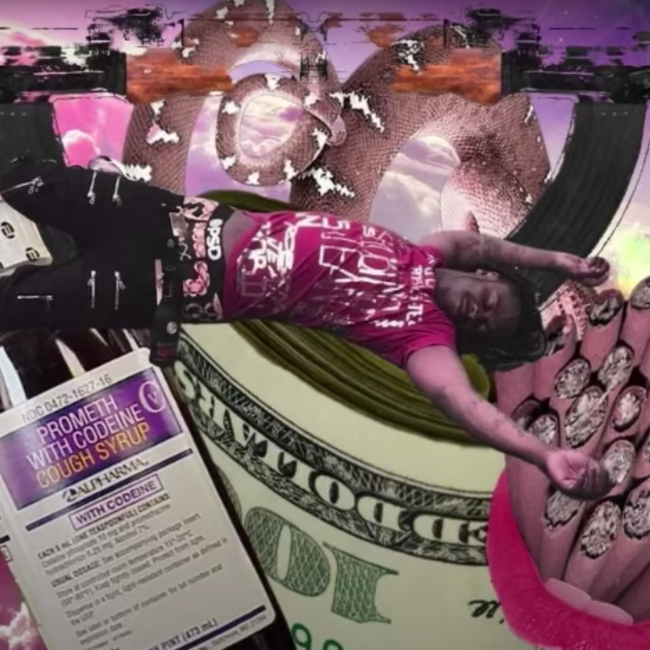 Harley Geffner got his COVID booster and immediately sunk 20 threes in a row.

“Nothing is off-limits” is a common refrain for writers talking about absurdist rappers and it’s often true, but there’s nobody who embodies that more than RX Nephew. He recently and very publicly (and I don’t approve of this) dissed his ex-girlfriend who passed away. And now… he’s dissing the beat. According to Neph, this beat sounds like a “Million Man March” beat, a Newport 200 type beat, a dirty-ass neck-braid Meek Mill beat, like Jay Z would have thought it was hot, like Rick Ross would have signed someone for lying on it, like a woman’s grandpa just died, like he shouldn’t have said anything on the beat except “yeah,” and it made him stop doing beat placements for the day. The minute or so snippet from the end of the song that’s been circulating on Twitter even inspired the maker of the beat to create a Twitter account just to respond to it. And one of the best parts? Nowhere in the song does he mention a “Blackberry touchscreen” If I ever have a really bad breakup, I’m paying Neph for a verse to diss my ex-girl and title it something like “Hanging Plant.”

Everyone loves a good callback, and Remble uses two elite ones in this song back to back – the first comes after saying that he’s happy with his girl but he wants Blacc Chyna, when 30 seconds later he makes sure we know “I hope you really don’t believe that I want Blacc Chyna.” Then he follows it up with a callback to the Nevermind Freestyle where he said “where the gun that you used? Bikini Bottom,” and raps “murder weapons in Bikini Bottom you not gon’ find ‘em.” This is one of the best Remble verses of the year, and Yachty does alright with the Remble flow, but followed by Remble himself gets straight embarrassed, and that’s to say nothing of the blowout.

Also, I am submitting a humble plea to please leave the Remble enunciation jokes alone. Here’s a sample of the YouTube comments on this song:

“Remble Doesn’t Shit On You, No Sir, He Simply Places His Metaphorical Feces On Your Face When He Rhymes About You.”
“Remble doesn’t spin the block, he simply maneuvers a motor vehicle while his accomplice expels copper alloy trajectory’s at Homo sapiens in which he dislikes, causing potentially fatal wounds.”
“Remble doesn’t spazz on the beat, he erratically composes superb audio recordings on an instrumental.”
“Remble dont rob people, he simply takes someone’s belongings without their permission.”

Leave them alone! They’re not funny anymore, especially when they’re flooded under all his posts.

I don’t know exactly how to explain it but this beat feels so full. It’s like every part of it is 100 percent maximized, yet it strikes a balance in still leaving enough room for the singing over it. The production has a lot of nostalgia in it too, kind of an old Yay area beat with some G-Unit era Dr. Dre fuzz. Something about it is so addictive, with Capolow’s voice sounding like the exact intersection between the smoothness of Banknote’s and the static displayed in Tapri Grams’.

A modern San Diego crew doing justice to an SD classic, with the O.G. re-hashing the hook! It’s easy to see why this was such an anthem back in the day – that “Take 94 West, we ain’t hard to find” hook is the type of lyric that’ll latch on to circles and have everyone yell it in unison. Although I must submit a complaint on behalf of Knicks fans that “bad jumper like Rose” is an outdated bar – he shot 49/41/88 splits on the Knicks last season.

Ketchy had such an electric presence, and really was the perfect foil to Drakeo. Ralphy is great, but occasionally can sound like diet Drakeo whereas Ketchy was really the high-octane Ferrari to match Drakeo’s quiet, electric Batmobile. Long Live The Greatest, and I’m glad they still have some videos in the chamber.

YeloHill – It Happened in LA – YeloHill quickly becoming one of the cleanest storytellers in LA
Baby Stone Gorillas – Military – A more introspective take from this newly formed group that hasn’t had a single bad song yet
EBK Young Joc – Many Men – You can guess which song is interpolated here
EST Gee x Lil Durk – In Town – This one line had me bending over laughing: “They only use their feet in shootouts, they got leg-arms”
RXKNephew – Sam Was Kinda Fire – The cover pic is Sam and iCarly…

Michelle (The Booyah! Kids) Links Up With Deem Spencer for the “Sunrise” Remix