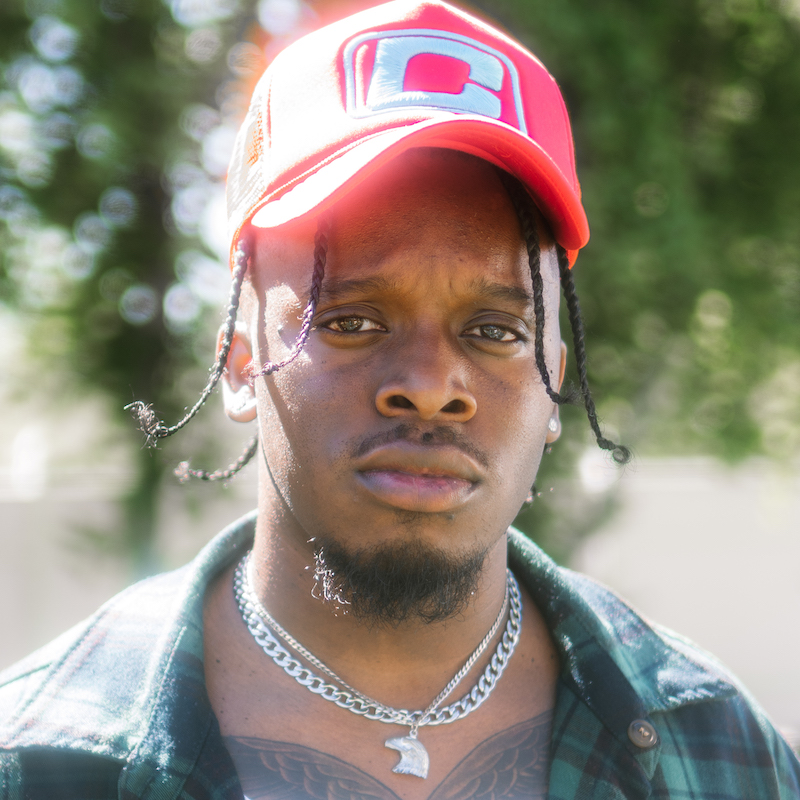 BLXST has a real gift for deeply searing melodies. Streaks of sunshine filtering through your window shades in the late morning; the type that will break up your day and get you to pause for a moment and appreciate the beauty of the present moment. Except instead of pausing, you’re up and stepping to it, imagining yourself soaking up the sunshine in his Givenchy slides and luxurious bathrobe on a 5-star hotel balcony overlooking the spa.

His new EP, Just for Clarity, is more of his trademark luxury comfort R&B. It’s tightly wound and at just two songs, doesn’t try to do too much. It’s a quick two-pack to set the mood right with bouncy hooks about bitter forgiveness and putting in the work to crack open a cold-hearted girl who’s been burned in the past. Drakeo sounds great on it too, bouncing off the scorned lover theme that BLXST introduces, putting in a verse about all the girls who want him now that he’s up, but not when he was battling the demons in the courtroom (as well as a bar about hoping someone chokes on soft-serve sherbet). And Russ sticks with BLXST on the bright guitar licks of the second song, singing about all the exes that fucked this girl up for everyone else. Just for Clarity is another step in the direction that BLXST set forth last year to be the hitmaker for everyone. It’s music to step to, relax to, introspect to and will hit the gangsters, party girls, and beachgoers all the same. There’s nobody else doing it like that right now.

Please rise for the National Anthem. This is the Magna Carta. This is the Declaration of Independence. This is John Locke’s social contract. This is the ten commandments handed down by God him or herself. “American TTerrorist / 9 minutes in hell” is the best song that’s ever been made and is the best song that ever will be made. There is nothing I can write to do it justice. The 9-minute lyrical onslaught aptly starts with Nephew explaining that he lacks patience with people because Jesus was killed for helping the people. He continues on to question every biblical story, saying he won’t eat a girl’s food because Eve made Adam eat the apple, how it’s fucked up that God just gave someone hundreds or horses, or maybe it was cows, how he’s beefing with his brother just as Kane and Abel beefed, and that yes, he will beat the shit out of Eve. And that’s all just the first minute of the song. He’s confused about how people are telling others they need Jesus because… where is Jesus? Does he need to get shot to meet Jesus? Sounds fucked up to me too.

Nephew raps about the invention of new religions every thousand years, how they made up some bullshit about worshipping the sun, when really, the only thing Nephew needs to pray to is his money rag. Social studies teachers made shit up, algebra doesn’t exist, and Christopher Columbus would get shot on Nephew’s block for claiming to have discovered shit. He cried when Will’s dog died during I Am Legend, he doesn’t like when girls use tarot cards, it’s hypocritical to pray before eating a dead animal, and he’s resistant to the industry because he’d probably do some shit like knock up Keke Palmer and ditch her. And oh yeah, Benjamin Franklin was bullshitting because if lightning comes from the sky, then it was really the T-Rex that discovered it. These are all hard truths, and I believe the Gospel of Nephew would change the world if it had the bible’s level of distribution, so I volunteer to stand on corners handing out copies. I will personally post it on Church doors all around my neighborhood like Martin Luther.

When two of the best crews of the past 5 years combine forces for an album like this, it’s bound to be an awesome listen. The 2oo4 crew, led by the insanely talented producer Subjxt 5, out of Elizabeth New Jersey, teams up with his crewmate Papo Johnson and DJ Lucas of Massachusetts-based Dark World records for an album that’s soothing, wacky, and dark in the same breaths. It’s DJ Lucas rapping cleverly about smoking spirits from the reservations, whipping his Prius, doing drugs that ruin dreams, and judging a woman’s freakiness by her bumper stickers, but he’ll turn around and reflect on the fact that some things are just fucked up and he’s not sure how to fix them.

Papo’s voice echoing behind Lucas from deep inside a cave as he booms out about copping sneakers he dreamt of as a kid and mowing the lawn in dirty designer. All of this is over the deep reserve of disco and R&B samples that Subjxt throws some crazy english on. Lucas and Papo sound great as complements to each other — Papo is 50 cent, he’s Pop Smoke, he’s Batman and Lucas is Penguin, the eccentric foil to trade bars with over the Wayne Enterprise Subjxt flips with the Kyrie lay-up package level sauce he puts on everything. It’s an incredibly cohesive and hypnotic mind-meld between all three parties, and the slice of life imagery with Lucas building snow forts in Western Mass while Papo rolls up a spliff watching the Mets down 3 in the 5th brings you right into their dailies. The culmination is something truly special.

These two tracks are brought to you straight from a parallel universe where Sacramento/Stockton is the center of the rap world. I can’t stop repeating EBK Jaaybo whispering “I’m in the shadows on this light I like to creep at night / he ain’t good in my hood don’t bring him past them lights … my young life been doin drills on stolen bikes.”

Na-kel Smith is coming into his own. A pro skater on the peripheries of the Odd Future movement, who starred in Jonah Hill’s 90s nostalgia movie, whose uncle was one of the best American jazz double bassists of the last century, who also is designing his own line of skate decks and also straddles the fashion world, released a full length tape this week. There are very high points on A Dream No Longer Deferred where he shines while rapping about sliding down different staple boulevards of LA, or when he gets into the black fire pit that depressed skaters minds will sink in to like on “Paris II LA,” but his influences are still strongly at the forefront of his music as he searches for a way to effectively graft them together in a more distinct way. None of this is a diss as much as it is to say there’s tremendous room for growth with Na-Kel, and he has the raw creative potential and energy to put out a very strong, across the board, project, and though the tape is a step in the right direction, it is not the one. But if Na’Kel is known for one thing, it’s bouncing back.

Whenever I’m questioned about any of my choices from here on out, I’m going to ask “Is you mad or naaah” in the Doggystyleeee voice.

OG Swaggerdick blurs the line between silly and hot, and this track is straight addictive.