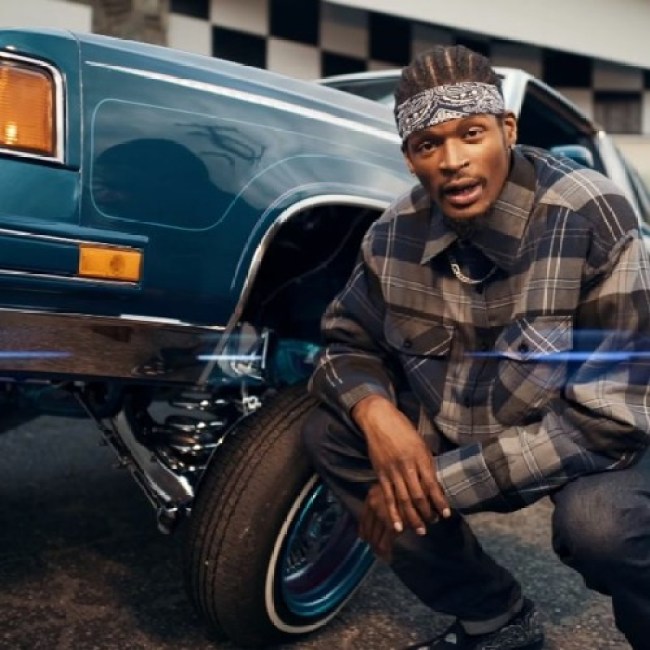 This is not a relic of a bygone era. G-Funk seems to be popularly known as something that left and has been on the rise in a new form over the past 5 years, but it’s really not. It’s been here all along, coded deep into the DNA of almost all West Coast music since time immortal. This is modern day San Bernadino, as influenced by the Warren Gs, Eastsidaz, and Dres of the world, but still in the now, with Doggystyleeee rapping about the day-to-day that’s persisted through time – blue shoelaces and corner liquor stores, flipping ankles between impalas with the tall shocks, and the struggles of picking communities up when there’s so much hatred that persists, rapping “We gotta fix ourselves instead of saying free us / hatin’ slows you down so muthafucka try to keep up / if we all stay broke then who the fuck is gonna feed us?”

Bino Rideaux and BLXST have the neo-LA R&B scene on lock right now. Every song either one drops is a sunset drive masterpiece, a slurry late afternoon two-step, or a pool party theme song. And “Movie” plays the role of all three, blending Bino’s rumbling melodies with BLXST’s clear-eyed approach. It’s all just warm up for my prediction of what will be the album of the summer, their joint tape dropping July 16th. Also love the 2-minute song turned 6-minute video with a funny little backstory that has absolutely nothing to do with the content of the song itself. We need more of these.

Shootergang Kony – Over They Heads

It all starts with the beat and that hollowed out steel pole bass pattern, but Kony straight straight up slides on Over They Heads. He’s spending your rent on Margielas, making monsters cry, and he’s the hardest level in the Kingdom Hearts game. And though paper effects have been over-used in music videos at this point, SuzyMadeIt continues to find creative ways to make them feel fresh.

The way rap beefs are excitedly covered can generally feel dehumanizing to those involved, with spectators treating them as fictional characters battling where we can choose sides and emerge victorious when people we don’t know end up dead. And yes its implications can be tragic and it’s always felt surreal to watch beef escalating in real time on wax, but disrespectful rap is still fun as hell to listen to, as seeing guys find new and creative ways to diss each other is an art form that dates to the early days of rap music.

Cmacc55 and Jap5 are known rivals, Jap from the Hoovers and Cmacc from the Neighborhoods (both LA), and Jap wrote the title of this song as featuring Cmacc, and even used Cmacc’s laugh all over the track. Activated doesn’t make the rap up because of the beef though, but really because Jap 5 is an incredibly talented rapper. He’s LA’s answer to DW Flame or ComptonAssTG, with a growl so vicious and presence so commanding, he’s impossible to ignore. Especially when he’s lifting big ass tires in the video like they’re 10 pound dumbbells, and ricocheting his raps with bars like “I said game time bitch, I was really on the Main Line, on FaceTime, ugg n****s 40 when they face time / high risk parole still got it on my waistline / my name ring bells from LA County down to Wayside.”

I wanted to find something new to say about Sheff G here, but every time I listen to him, Rap Up alum Mano Sundaresan’s words reverberate in my mind. His analysis of Sheff G’s 2020 album One And Only is one of the most poignant pieces of rap writing in the last few years and is a testament to the power of music writing – how it can tweak your ear and allow you to hear new things that amplify your enjoyment of the music. When I listen to Sheff G now, I focus in on the teetering anticipation Mano wrote about, I feel the compression and concavity of his raps, the skeletal drill of Great John, and the grey numbness of Sheff’s voice that holds on to, but builds upon what makes Brooklyn drill so special. And I am listening for how he’s growing in his own style, what he’s doing with the minimal drill foundations he laid over the past two years. For posterity’s sake, here is Mano’s write-up in full. Hopefully it can do for those who haven’t read it yet what it did for me when listening to and thinking about Sheff’s music:

“Like DJ Rashad’s footwork or Jessy Lanza’s silky synthpop, Sheff G’s drill lives in your chest and shoulders and headspace. It is quiet and compressed; you can almost meditate to it. On Friday, he dropped One and Only, the latest and best iteration of his sedated vision, and one of the finest Brooklyn drill projects to date.

Give Sheff credit, but also give producer Great John his flowers. What they had started doing on The Unluccy Luccy Kid that they fully lean into on the new tape is pare Brooklyn drill down to its skeleton, cutting out its fleshy low end in the process. The drums are now a quiet patter, the 808s sometimes nonexistent. On first listen, the guitars on “Tonight 2” demand to go somewhere. It is constantly teetering, all anticipation. When will the bass kick in?

It doesn’t. Very rarely does Great John’s production slam you in the face, and that’s by design. In the shrunk-down world of One and Only, the primary percussive element is Sheff’s voice. And he has an incredible voice, a storm cloud of a baritone that imbues even his most aspirational writing with a grey numbness.

He raps breathlessly and brilliantly across this record, demonstrating total mastery of textbook drill flows. The quintessential joys of drill come through: tracks that have speed lines trailing behind them, choruses that’ll hide in your brain then pop their heads out every so often, even jabs at other artists (22Gz was asking for it).

What’s especially striking about Sheff is that he turns all this velocity, energy and presence into a vehicle for his paranoia. Locked into drill flows, the lines sound like they’re running off the page, like Sheff can’t think straight. On “Once I’m Gone,” he asks if he’ll be remembered after he dies, then considers how he might die. He doesn’t want anybody near him, but also doesn’t think anybody hears him. He uses the “huh” ad lib across the mixtape as a caesura, a formal break, but here it wavers in the second chorus, like he had to stop to ground himself.

Sheff is still growing as a writer. He’s only 21, he has plenty more life to live. But there’s no mistaking the subtle strand of drill that he has cultivated with Great John.

There’s no denying his impact, either. The biggest surprise for the uninitiated will likely be that Sheff is like Jay to the kids in Brooklyn. When he roams his home turf, he’s constantly stopped for photos and daps and IG stories. He’s larger than life, Gen-Z royalty, but you wouldn’t immediately know it from listening to his music. Sheff G doesn’t make drill to dance to.”

Another Postseason Filled with the Clippers’ Karmic Retribution