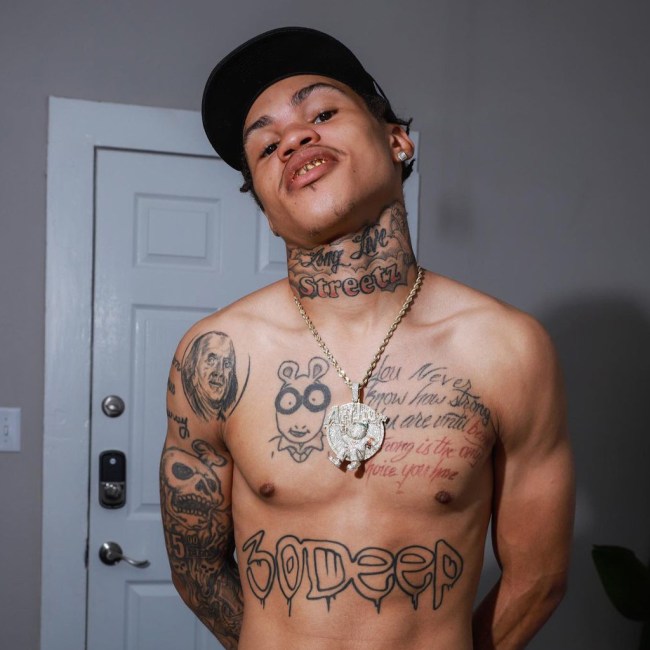 Brandon Callender doesn’t want to see Italian drill on his timeline, even after this weekend’s victory.

No region loves the sound of sinister piano loops and ominous melodies swirling together more than the DMV. Who can blame them? It’s the perfect accompaniment to their punched-in horrorcore raps. But over the course of a full tape, it starts to wear on you. It’s why I’ve mainly been listening to Lil Gray and Tae Dawg, who are some of the most omnivorous rappers working today. On U Hear Me?, Sparkheem’s second album, the always in-demand producer pushes everyone out of their comfort zone, even if it’s just a slight course correction.

U Hear Me?’s tracklist is filled with familiar faces like Goonew, Lil Dude, Tae Dawg, Lil Gray and A$AP Ant—even Slimesito makes an appearance all the way from Clayton County. On early standout “Dragonball,” Goonew, Lil Dude and Lil Gray toss the mic back and forth over a smoky Beyonce flip. Kayvo’s two-parter, “C4/Wraith,” is a quick return to the anxiety-inducing beats DMV rappers favor with its droning sirens and a hair-raising piano loop that drops in and out. Rising artists Joony and TFR Natu make welcome appearances as well with the two crooners rounding out the range of rapping styles represented on the tape. At times, it can seem as if Sparkheem’s creatively restrained by the people he works with, but on U Hear Me? he’s getting the chance to pop out for a little and show more of what he can do.

BabySantana, better known as Mr. Socially Anti, has been catapulted into fame over the last few months. At 14 years old, he leans heavily on his influences, but that hasn’t stopped the chaotic and intense “Antisocial” from taking off as quickly as it has. Two months after the original released came its aptly-titled sequel, “Antisocial 2,” which makes the former seem like an ambient field recording in comparison. The drumline-like snare hits are crisper, the laser synths beam like they’re ready to close out the final day of Rolling Loud. There aren’t many other songs from this year that will end up feeling as big as “Antisocial,” even if they try to stuff stadium-sized guitar riffs in them.

On “Prada,” Santana slips into the dreamy land of pluggnb, bringing Lil Tecca on for the remix. Tecca’s appearance here isn’t surprising—judging from the fact that he produced SoFaygo’s “Knock Knock”, which caught a second wind this year, threw Ka$hdami a beat or two, and hopped on a song with Autumn!, it’s safe to say he still has the SoundCloud app installed on his phone. “Talkin’ that money, they hit my line/Plain jane, know I can tell my time,” Santana flexes over the syrupy electronic whirring. As soon as you kick back to enjoy the hook coming back in, the song disappears in a puff of smoke. It’s tempting to keep running it back.

Los is always checking over his shoulder to make sure he isn’t being followed. When he takes the time to brag on songs like “It Get Deep,” it’s less chest-beating and more like him revealing just how little you know about his master plan to take over the world. Over Top$ide’s growling basslines, he raps about secret gun compartments in minivans and staking out houses in camo suits. When Daisy Lane Records opens its own film studio based on Los and Nutty’s crime saga raps, I’m gonna have to fly out to Detroit for every single premiere.

Babyxsosa doesn’t need anyone’s advice. “Running,” is feather-light as she sings about heartbreak and finding new love in the same breath. “I’m like fuck your old bitch, I’m the new one/I’ll be changing your life,” she coos. Her reverb-drenched vocals are suspended in mid-air. There are no drums to bring ground Babyxsosa’s love pangs—she’s left adrift in the sea of fuzzy synths and guitar of “Running.” In less than two minutes, she crushes your soul and comes back to help you piece it back together again.

30 Deep Grimeyy and Luh Kel find themselves in some soap opera-level love life issues on “Dogz Turned Snake.” The duo from St. Louis synchronize their cries of betrayal as they realize their now-former friends have been plotting on their exes this whole time. “We was riding, one direction, now we off the track/I shook your hand and pulled you in, you stabbed me in the back,” Luh Kel sings with his voice full of disappointment. Grimeyy fills in the other side of the story, rapping about how him and his mother would put money on his friends’ books. “My daddy told me, ‘Watch these niggas, I got snaked by my brother’/Pillowtalking to the other, boy your ass undercover,” Grimeyy snaps. There’s not a show on TV right now with as much melodrama as this.

Cardi B Calls For Racial Unity In Wake Of Coronavirus Pandemic