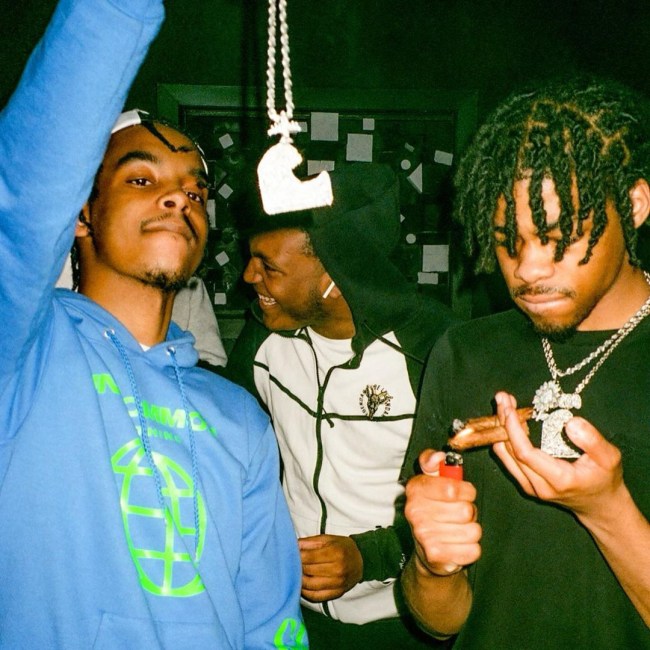 Brandon Callender can’t believe we live in a time when we have to go through IG Stories to find proper producer credits.

If things keep going how they’re going, The Rap-Up is going to become a capital-D Dance Music column. Bandmanrill’s been going crazy up in Newark with MCVertt and them for the last few months and here we are now taking a little detour to chop it up with the Philly Goats. “Shake That” has been repurposed for all kinds of memes on the endless scroll television/comedy sketch/questionable recipe generator app (“TikTok”) and the video dropped right as the year rolled over. Zahsosaa and Philly Goats Dyce, aka Dsturdy, rap over an orchestral and sinister beat cooked up by Philly Club DJ Crazy; warbling flutes and dramatic strings clash with rapid gun clicks and pulsating kicks. There’s nothing deep or revealing about the lyrics here—it’s all a slow build-up for Dsturdy to rap “C’mon, shake that shit, we doin’ the beam in a Beamer / I was just fuckin on a bitch named Selena” to make the song descend into pure joyful chaos. There probably won’t be another video this year that calls for an impromptu dance battle in its treatment. Crossing my fingers for Baltimore guys to start hopping on Bmore club next.

When World Tour Mafia or Die dropped last year, I didn’t know much about Milt apart from a few features, but he caught my ear on “John Wall,” boxing out Brooks and G.T. with the strongest verse on one of the tape’s best songs. The exotic weed and overpriced designer clothes he raps sound more like hazy fantasies than flexes when you hear his lethargic voice. “I ain’t even tryna brag, it’s too expensive when we drink / The real mob, it’s like all the families meeting when we link,” he says under his breath. Solid is more energized than Milt, but not by much; all of the World Tour Mafia guys sound like they’re kicked back while delivering their lines. In 2021, the WTM crew pushed up against the boundaries of Michigan rap with their sometimes out-there beat selection, but they always find ways to get back to the basics.

This week I’ve been listening to a lot of Skooly because I learned that Nobody Likes Me, his overlooked 2020 album, has a live version that no one made any noise about. There’s a lot to love about it, mainly how good he sounds live, but when you listen to it, it’s hard not to hear all of his descendants who are trying to take their own cracks at the style the former Rich Kid perfected in the mid-2010s. Maryland’s Black Fortune sometimes sounds like he was raised on a listening diet with sizable portions of Skooly and Shy Glizzy, the harsh punch-ins the DMV loves often take the backseat to a sweet and disarming singing voice that delivers reckless threats, lovesick paeans to women and drugs with equal consideration. “All I see is red,” he sings before plunging into a wordless, reverb-soaked croon like a blood-starved vampire. It’s not the most creative post-chorus ever, but I can’t lie—it’s the reason why I’ve kept coming back to this song.

Jugg Harden doesn’t want to be bothered by other people. On his latest mixtape Rookie of the Year, he dedicates an entire song to being a homebody that can still touch a bag (“Biggest Flex”) and I can’t even blame him. Leaving the crib can be a waste of time. The “Wanksta”-flipping “Tariq” makes me wonder if the Detroit rapper’s been binging one of the latest additions to 50 Cent’s TV Empire on Starz, Power Book II: Ghost. This flip doesn’t change the beat too much, though the added percussion gives the song a bounce more akin to the current-day Detroit sound. “Lil bro don’t scam, he all grams / I don’t get fronted, only nigga I owe is Uncle Sam,” he says in a droning monotone. When Jugg Harden flexes in his raps, it’s with a poker face that has no tells in either direction. It’s on you to call his bluff.

Babyxsosa blessed us with enough singles in 2021 to make what could’ve been one of the best EPs of the year. At the end of the year, she went back in time to drop videos for some of her older songs, including “Kobe” and “Cancer Baby.” Her light, sugary vocals drift over of Paris Aden’s sparkling production as she singing about a relationship with a scammer asking her about Venmo accounts. “What the fuck are you talking about I told you several times once before I am not the emotional one you fucking bitch,” she interjects in an aggressive burst that reminds me of Hook. It’s a brief moment that forces you out of the enchanting spell of the song before jumping right back to the hook as if nothing happened (”He say I’m so toxic, call me cancer baby”). It’s like she doesn’t want to give you the chance to process what happened. Is it cheating to include a song from 2020 in here because it got a video? Maybe. But Babyxsosa’s so good I don’t mind.