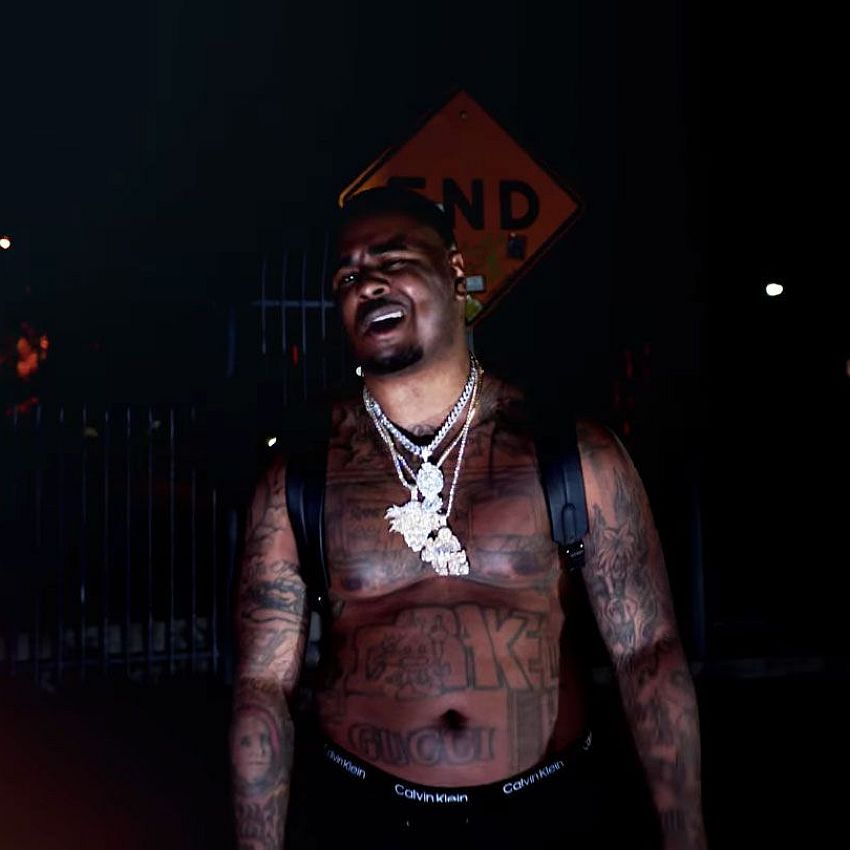 Please support independent rap journalism by subscribing to the entirely reader-supported Passion of the Weiss on Patreon.

Brandon Callender and Caleb Catlin are now ready to take on the Dudley Boyz.

Caleb Catlin: Sports references in rap can be annoyingly basic; there’s a Jordan or Kobe reference in every rapper’s songbook. But the BlueBucksClan’s love of football and basketball trivia, as well as the occasional wrestling bar, rivals Lil Wayne’s obsession with Sportscenter. They trade bars about current Seahawks receiver Tyler Lockett and retired role players like Udonis Haslem and Drew Gooden. Maybe one day we’ll get a song that name-drops Antoine Walker or Donyell Marshall. Sports bars aside, on “ForeignBucksKlan,” the trio excels in their springy flows, leaping from one bar to another. “Old bald head n*****s hatin,’ Joe Budden,” Jeeezy raps. It’s perfect speaker-thumping music for nights zooming through the highway.

Brandon Callender: In a different timeline, Jeeezy and DJ would probably be behind a commentary desk arguing about advanced stats only make sense to people whose favorite movie is Moneyball. Thankfully, they’ve instead decided to use their encyclopedic knowledge to help rap move past “30 on me like Curry” bars. “Always with another nigga bitch, yeah, she tooken / My bitch caught me cheating, damn, I can’t do nothin’,” DJ raps. They don’t waste a single second on this beat, every possible moment after the drop has someone talking shit on it. “This a thirty ball on my neck don’t touch it / Lemon squeeze, make him skip when I bust it,” KT Foreign scoffs. Two of LA’s best shit talkers have finally met their match.

BC: On “Across 110th Street,” Bobby Womack painfully sang about doing whatever he could to make a little money. Even though he knew what he was doing wasn’t right, there was no way he could stop. He was in survival mode; every single dollar made a difference to him. You can hear that same hunger in the voice of Memphis’ Lil Migo. “Standin’ in the trap, now I’m standin’ on stage, how I make it out? Coulda been standing in a cage,” he raps over Womack’s soulful howls. “Guess God had better plans anyway.” Memphis has an insanely deep bench right now. It feels like someone is getting launched into stardom just about every year from that city, and they’re not afraid to pull a few friends along with them for the journey. Pound for pound, I’m positive that Memphis could match up against any city in rap right now — they’d probably run off with a few surprising wins too.

CC: With Duke Deuce spearheading the revitalization of Crunk and Key Glock and Pooh Shiesty embracing trap, Lil Migo fits in seamlessly. The urgency of “Make It Out” is hard to ignore. On “Across 110th Street,” you could feel the tension cornering Bobby Womack, the frenetic pacing made you sweat bullets. All of that leads up to a climax that explodes right in your face. Lil Migo expands on this, by chronicling his come-up and flaunting his wealth in the process. “Walk a mile in my shoes, n***a couldn’t take a hike,” he brags. It’s incredibly bold to remix such a beloved classic, but Migo’s flip gives it an equally as intense modern twist.

Drakeo the Ruler – “Too Icey”

CC: Before Drakeo the Ruler was wrongfully imprisoned, it was clear that stardom was on the horizon. Since his release, he’s dropped the stellar We Know The Truth, a few loosies on YouTube, and has The Truth Hurts coming later this month. He’s got to be tired. Drakeo shrugs off the past with unshakable confidence on “Too Icey.” “I lift up my sleeve and almost went blind,” he sneers over the sweltering guitars. Drakeo isn’t worried about anyone hating from the comments section. All that’s irrelevant to him; he’s been through worse already. The only thing he cares about now is filling up the studio with bags from Neiman Marcus.

BC:  If someone told me that Drakeo was sleeping in the studio right now, I’d have a hard time not believing them. He’s been on a run since he got out of jail. Drakeo always sounds like he’s leaning into the microphone and somehow that’s way more intimidating than him rapping at a normal volume. “Imma sit outside his mama house to read a poem,” Drakeo taunts over the ominous chimes. He’s the only rapper on Earth that could make  “casket” rhyme with “backwards.” With Drakeo’s ready to start making up for lost time. There’s no one in his way now.

BC: While deluxe albums may have become a marketing strategy to farm streams and keep albums charting for some last year, I still appreciate the artists who are using them to nudge you to give an album they dropped a few months ago another listen. Fredo Bang’s In The Name of Gee (Still Most Hated), tacked on an extra 10 songs, including the Lil Durk-featuring remix of “Top. Even though it looks like Durk and Fredo are on top of the world, there’s an underlying paranoia that’s always present in their music. They’ve lost friends already — they don’t want to lose any more. “Standing over your body, I got my tears together / I just let you know I got your kids forever,” Durk sighs. “Taking all these drugs, wish I could live forever.” These gut punches pull you out of the mellowness of the track for just a moment. These kinds of songs are Durk’s bread and butter; he built his career off music like this. Over the last year, it’s been exciting watching Durk embrace becoming a true rap star and becoming one of the most sought-after features.

CC: Durk’s style has quietly become one of the most influential of the last decade too. While 2020 was his biggest year, people who listened close know how long he’s been fusing his pain-stricken melodies and adrenaline-rushing raps. He never stopped making quality music —  this is just an extension of the run he’s been on since 2013. Maybe it’s the fact he’s lived through so much trauma and it bleeds into his music, but now he’s more candid than ever. When he wipes away the tears and promises to take care of his friend’s kids, you’re left with such a bittersweet image. On “Top,” Durk and Fredo Bang stand tall, looking forward to brighter days in spite of how grim things have looked.

CC: There’s nothing more empowering than your community backing you. Even in the middle of a pandemic, Louisville came out to support EST Gee. COVID be damned. His fiery raps swirl over the heavy pianos like a tornado during Armageddon. There’s no space to breathe on the claustrophobic beat, let alone a margin for error. “I still think that I can make a million on Tubman,” Gee chants with his city right by him. “Get Money” makes you want to pound on your chest. With his city behind him, EST Gee’s ready to take it to the next level.

BC: Yo Gotti has an underrated ear as a talent scout. He struck gold when he signed 42 Dugg and Louisville’s EST Gee is coming right behind him. EST Gee’s been building a name for himself for a while, appearing on songs with fellow Louisville rapper Jack Harlow, another with rising Detroit star 42 Dugg and even one with Detroit mainstays Payroll Giovanni and Icewear Vezzo. Rappers from the midwest can’t help but talk cash shit when they get on a beat. “Standing over your lady letting it dangle doing the Cabbage Patch,” Gee raps over the bouncy dark keys. “Niggas know the city was gettin’ soft, I brought the static back.” His diss game is on par with Sada Baby’s, who once threatened to take shits on your toilet and play with your kids. It might finally be time to unretire the Louisville jerseys in your closet.

BC: Rx Papi just can’t catch a break. $20 for some drinks and a pack of Backwoods? He can’t believe it either. We all know how much our store runs are going to be before we even step foot inside. Papi’s used to paying $18.40, so he (unsuccessfully) attempts to barter with the cashier to get a better price. Like most of Rx Papi’s music, “Money Rag” is a loopy, smoke-filled dream. “Baby girl say she like my swag, outfit match my money rag,” Papi croons. “Baby say she like the way I talk, say I move around like a boss.” He’ll sweetly sing about shopping with the plug, speeding in his Audi, and how annoying it is that people want to mess with the radio in his car. When you’re Rx Papi, there must be no such thing as a boring day.

CC: That $1.60 difference in payment really means the world. One of life’s biggest betrayals is when your favorite stores start screwing with prices you’ve been accustomed to for ages. The idea that an Arizona could go from 99 cents to $1.19 is a Teejayx6 level scam. Watching a bag of $2 Chester’s Hot Fries tack on an extra quarter and some change is worse than any messy break-up. Moving to California has exposed me to such tragedies — the spicy McChickens I frequently scarf down almost doubled in price — so I get it. We all need to shout over an instrumental that should be in a guided meditation video from time to time. Whether it’s pulling up on Fred Durst look-alikes or recalling the decisions made to pay the bills, “Money Rag” is the perfect blend between Papi’s trademark absurdity and dreamlike production.

Tower Records is Relaunching as an Online Music Shop