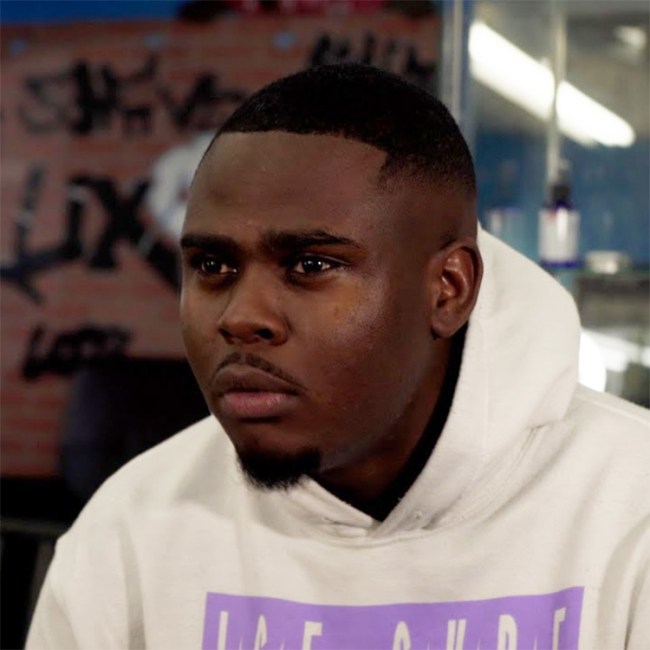 The hottest rapper out of L.A. right now enunciates every line like he’s explaining it to his engineer in the studio. It’s a style people are gravitating to for its novelty, but paired with the city’s foremost classicist G Perico, it sounds a little less futuristic and a little more like Mac Dre or E-40’s word salad. Over a plucky synth arpeggio that sounds like a concerto for lowriders, Perico and Remble send shots at snitches and hit assailants with sidesteps and “squabble” with everyone. The video looks like the cover of Tha Doggfather, Perico dons a befitting workwear suit, and just in case the message wasn’t made clear, he ends the track by naming random states and cities like it’s 1994. What separates this from pure revivalism is how traits of those old-school predecessors are blown up to fill the whole screen. Perico somehow wears a scowl deeper than Eazy-E; E-40’s cartoonishness becomes Remble’s “Silly rabbit, why would you go against my Tec?” Together, the duo is tracing futures for West Coast rap by reimagining its roots.

Maybe I’m past the point of no return, but eight months into 2021, I am still a sucker for these insane, 2000s R&B sampling drill beats. Especially when it doesn’t feel totally lazy. On his new EP Now Or Never, Bronx rapper 1600J approaches a Mario Winans sample with levity and grace, even cooing the original’s haunting melody through a waterfall of vocal filters. And on “Say My Name Intro,” the producer 15 laces that frantic drum break in the Destiny’s Child song with blaring bass thuds. A mainstay in my SoundCloud feed this year, 1600J connects the dots between the dreamy R&B melodies of the aughts and the sing-rap of PluggnB.

Three perfectly delivered words — “sorry bout dat” — and a blaring Whole Lotta Red-type beat have turned SoundCloud rapper Yeat into an online sensation this summer. On that song, he practically gnashes his teeth as he says, “A-T-E, she eat me up! / ATV, way she ridin’ on.” This week, he followed it up with, what else, “Mad bout that.” The beat is virtually identical, full of those brittle synths associated with the “rage” sound, and in this one, he growls, “I was sorry ’bout that, bitch, but now I’m mad ’bout that.” I’d normally be annoyed by a song that is so obviously playing into a viral moment, but this is kind of great. He sounds like the angry emoji! Yeat’s a colorful rapper who leaves bright streaks of ad libs as he powers through all kinds of production, but right now, he seems content with systematically going through every emotion over the same beat. If the buzz around the snippet to his unreleased song “Here’s A Bell” is any indication, he’s only getting started this year.

When Bay Area rap duo 1100 Himself and Mitchell aren’t brainstorming new directions to take their thrilling rap-series-slash-film-franchise, now at four parts, they’re living life and experiencing the feelings we all face. Well, possibly struck by inspiration, it seems 1100 has pivoted to breakup movies. He leaves Mitchell on the sidelines for “Let Me Down” so that he can vent about his broken heart alone: “You just punched me in my heart, you think you’re Holylfield?” He sighs through every bar like there’s a storm cloud following him home. An Oscar-winner in my heart.

It’s been fascinating to see Bktherula grow from her days making DMV-inflected songs like “Faygo” and Duwap Kaine-type records like “Tweakin’ Together.” She’s coming into her own sound, which still sits somewhere between regional rap cues and the internet, but transcends both by shimmering bright and shooting out color — see last year’s immaculate “Summer,” which some music supervisor needs to pounce on for their coming-of-age film. On “Not Wock,” she ditches the singing for hard, propulsive raps that pass by in the blink of an eye. You’ll want to run it back right after.

Compared to last year’s NEGRO, which sparked catharsis through the genre boundaries it pushed, Pink Siifu’s new album GUMBO’! finds that release inside comfort. Soulful samples often ooze out your speakers, and sometimes, like on “Bussin (Cold),” he delves into sedated trap that splits the difference between SoundCloud rap and L.A. beat music. He moves around this rubbery beat like a snake around prey, tightly navigating its pulse. On the surface, it feels like an exhale, but make no mistake: Siifu is always sharpening his sword.

Snoop Dogg Issues Public Apology To Gayle King: ‘Had A Talk With My Momma’

Blueface Makes It Rain In Skid Row For Christmas