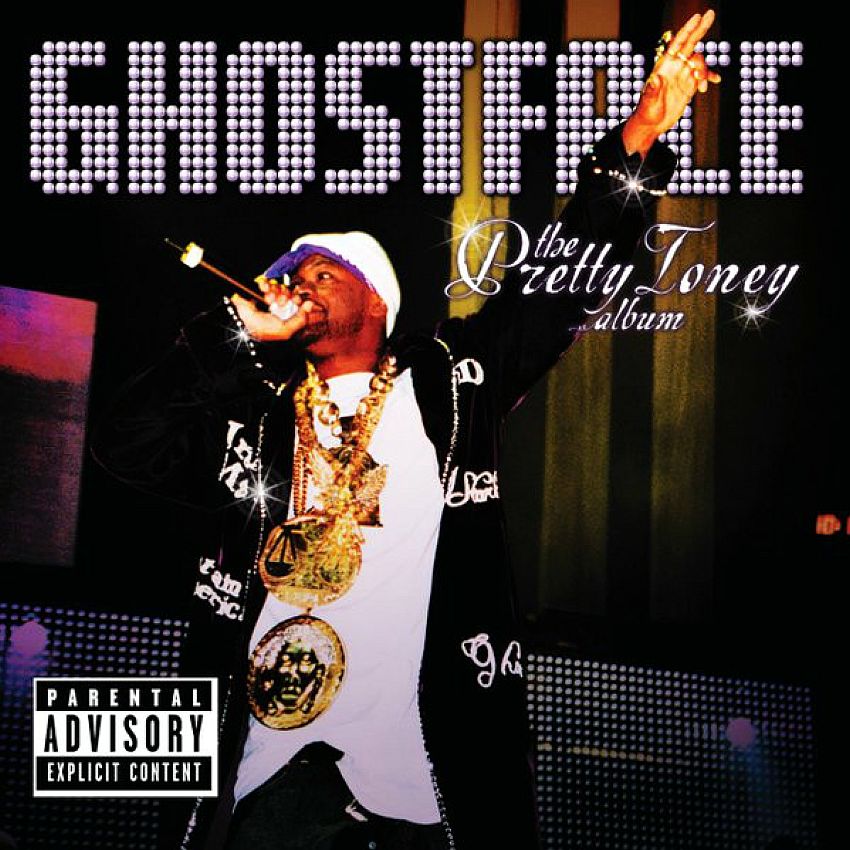 Please support truly indpendent rap journalism by subscribing to Passion of the Weiss on Patreon.

Pete Hunt will open you up like a pap smear.

And yet… if you want to be a contrarian, you can make a strong case for The Pretty Toney Album. Admittedly, it’s not a front-to-back classic like SC or a cohesive artistic statement like Ironman. But the album’s patchwork production provides a revealing look into Ghost’s creative process; you’re hearing an artist at the peak of his powers swinging hard at different sounds and styles while trying to find an elusive radio hit.

Pretty Toney is also the first Ghostface solo joint not to feature an executive producer credit from RZA or guest spots from other Clan members. In fact, the album sometimes seems to be answering the question “What would Dennis Coles have sounded like if he never joined the Wu-Tang?”

What’s also missing from this album is “Killah.” Def Jam persuaded Ghostface to drop his menacing surname, presumably in a bid for greater airplay. However misguided the marketing push, the new label did offer an artistic reboot after the underwhelming response to Bulletproof Wallets. The best thing about that album was its title, which did with two words what Hemingway tried to do with six. The songs, though, sounded like a selection of b-sides—a lesser Amnesiac, if you will, to Supreme Clientele‘s Kid A (the original version with the uncleared samples is a different story).

Pretty Toney represented a fresh playbook executed by a new supporting cast of performers and producers, many of whom would continue to collaborate together or otherwise find success.

So, without further ado, let’s stretch a football analogy well past its breaking point with a look back at the Pretty Toney coaching tree: those largely unsung characters who made it a minor classic.

Emile Haynie is one of those fashionably bearded producer-slash-songwriters that anyone who flips through streaming music stations has heard, but whose name you might not know (unless you were once in the cult of Cudi.) He was behind the boards for Lana Del Rey’s Born to Die album, Fun’s Some Nights, and radio staples from Adele, Bruno Mars, and Lady Antebellum. He also produced or co-produced countless hip hop songs, including hits from Kanye West (“Runaway”), Eminem (“River”), and ASAP Rocky (“Everyday”).

Real heads know him from the opening track to Pretty Toney. Yes, the mock press conference one where Ghostface insults nosey reporters—and somehow ends up in an exchange about the Aflac duck—while a sample from Tommy Youngblood’s “Tobacco Road” plays in the background. “Intro” is one of Emile’s earliest credited productions and he explained the track’s origin in an interview with Complex:

“I made this fucking beat and the beat was incredible. I remember thinking, ‘This is so perfect for Ghost.’ Like, he’s gonna make this amazing album song over it.

Ghost called me and he’s like, ‘Yeah, I did it, but it’s the intro.’ I was like, ‘Can I hear it?’ So he sent it back to me, and it’s my beat that I thought was a masterpiece, ran through like some fucked-up filter, with Ghost just like talking on it for like forty seconds.

I was like, ‘Dude, can you just do sixteen bars on it and we’ll put it on a mixtape or something? I just want to hear you rap on this beat.’ And he was like, ‘Nah G. This is starting off the album.’”

Emile got another shot with two tracks on the Theodore Unit album that dropped later that year—meaning there’s only one degree of separation between Shawn Wigs and Jack Antonoff. He also produced AZ’s “New York” (featuring Ghost and Rae) and “Pimpin’ Chipp,” a Ghost solo cut from the Wu-Massacre album.

Superb (RIP) was being set up as Ghost’s understudy on Supreme Clientele and Bulletproof Wallets, but then he went and accused Ghost of somehow biting *his* style—which, you know, seemed like an ill-advised move at the time. (Somehow, Tony Yayo was also involved in this dust-up, which just makes it all the more insubstantial.)

Trife was waiting in the wings, though, having thrown out some great ad-libs on “One” and dropped solid verses all over Bulletproof Wallets (most notably on “Theodore”). And he absolutely blazes like Bonzi Wells on the True Master-produced “Biscuits,” which is built around a filtered horn sample from Sam & Dave’s version of “I Can’t Stand Up for Falling Down.” Trife’s grimy lyrics aren’t as cerebral or free-associative as Ghost’s (or Superb’s), but his delivery is frantic and propulsive and every bar demands your attention.

The subsequent Theodore Unit album was filled with cuts from the Pretty Toney sessions but ultimately felt a little undercooked, as not every member of that roster was ready for primetime. Much better is “Put It On the Line,” the mixtape-style Trife and Ghostface release. (“Fire” is a total banger.) Trife was also all over Fishscale and More Fish and appeared on one cut on Apollo Kids.

Since then, his recording output has been inconsistent, but if you dig around Spotify you’ll find some recent work (including collaborations with Method Man and Inspectah Deck) that’s all pretty solid.

Ghostface famously accused Biggie of “biting” Nas’s Illmatic cover art concept for Ready 2 Die, so it certainly seemed… unexpected that the one-time Bad Boy stalwarts would be so prominently featured on Pretty Toney. But this is the album where the robust Wu-Lox relationship really begins.

Sheek Louch and Styles P join Ghost to issue impassioned odes to ammunition on the No I.D.-produced “Metal Lungies.” (Buckwild flipped the exact same “Nobody Knows” sample a year later for 50 Cent’s “I Don’t Need ‘Em” in a move that certainly felt like trolling.) The collaboration feels completely natural, with Sheek even dropping a Wu-friendly Iron Monkey reference.

The album’s most memorable moment, though, comes when an especially raspy Jadakiss blesses the RZA-produced “Run” with some absolute career-best bars. In fact, if you’re a Pretty Toney partisan, “Run” is the song you point to as a testament to the album’s greatness. It’s a perfect blend of Wu-Tang cinematic sensibility, Ghostface’s frantic storytelling, and Jada’s opulent insouciance.

These tracks ended up being the first of many collaborations between crews, from “Broken Safety” (on Only Built 4 Cuban Linx… Pt. II) to “Youngstown Heist” (on Wu-Massacre) to the entire Wu Block album, which is slightly better than you remember and probably deserves a reappraisal.

Minnesota is a producer familiar to liner-note obsessives but otherwise best described as “under the radar.” He got his start during the boom-bap era with South Bronx’s Money Boss Players and soon laced tracks for Naughty By Nature, Lil Kim, and Grand Puba. His biggest hit during this stretch was probably the original (Joe-less) version of Big Pun’s “I’m Not A Player.” He’s also produced numerous tracks for Mos Def, including “Beef.”

Not a household name, then, but a crafty veteran who reliably got work. So if we’re sticking with the coaching tree analogy (and after 1,100+ words, why not), Minnesota’s role on Pretty Toney is something akin to… Bill Parcells during his last coaching stint with the Cowboys, maybe? But that’s probably underselling it, because his contribution to this record is absolutely masterful.

Earlier I referred to “Run” as the album’s most notable track, which is true, but to me “Beat the Clock” is not only the best thing on the record, it may be the greatest thing Tony Starks ever recorded. Rock music has a pantheon of great coke jams (“Can’t You Hear Me Knocking,” “Sister Christian,” “Kickstart My Heart,” “Don’t Stop Believing,” etc.), but this song takes the teeth-grinding highs from those classics and synthesizes them into (just over) two minutes and thirty-seven seconds of acute delirium. I mean, the song begins *immediately* with a sample of soaring strings (from Laura Lee’s “Since I Fell For You”) that practically slaps you in the face. THEN you hear the police sirens, and Ghostface begins a frantic argument with himself. It’s like somebody recreated the Alfred Molina scene from Boogie Nights as a one-man monologue performed during a high-speed chase.

Unkut put together a “Salute to Minnesota Productions” mix a few years back, though the download link has unfortunately gone dead. There’s a comment underneath the article that references an earlier version of “Beat the Clock” featuring a rapper named “Tre Bag.” Reader, rest assured I sunk several hours scouring the deep web for any trace of this song, all to no avail. But if you’re out there, Tre Bag, please DM me a Megaupload link ASAP.

Miami rapper Jacki-O had a regional club hit called “Pussy (Real Good)” in 2003 and soon landed a record deal with TVT. A year later she was on “Tooken Back” and the rest is history. And by “the rest,” of course, I mean a series of mixtapes, countless comparisons to Trina, a faux-beef with Foxy Brown, a debut album featuring the Ying Yang Twins and Trick Daddy, shots fired at DJ Khaled, a Chapter 7 bankruptcy filing, the dissolution of her record label, an independently released follow-up album, a novel called Grown & Gangsta released by C-Murder’s publishing house (naturally), wrestling entrance music for Stephanie McMahon, a retirement from rap, a transition to Apostolic ministry, and a repudiation of her own musical career.

But back to “Tooken Back”—so many of Ghost’s previous relationship songs were one-sided accounts of seduction (“Wisdom Body,” “Camay”) and inevitable betrayal (“Never Be the Same Again”). And here he’s once again the wronged lover, refusing to take the girl back after she called the cops on him. But Jacki isn’t afraid to push back, noting she stuck with him through hard times, introduced him to criminal connections, and even put up with sex that “wasn’t wild.”  Her lyrics and delivery are perfectly matched to the song’s soulful vibe (and Nottz’s pitch-shifted “Take Me Back” sample), and somehow she has Ghost begging her to come back by the end.

Tracks like this epitomize Pretty Toney’s appeal as an album that evokes the spirit, not just the sound, of 70s soul. It’s a vibe Ghost tried to capture again with Ghostdeini and intermittently on other albums, but this remains the high watermark.