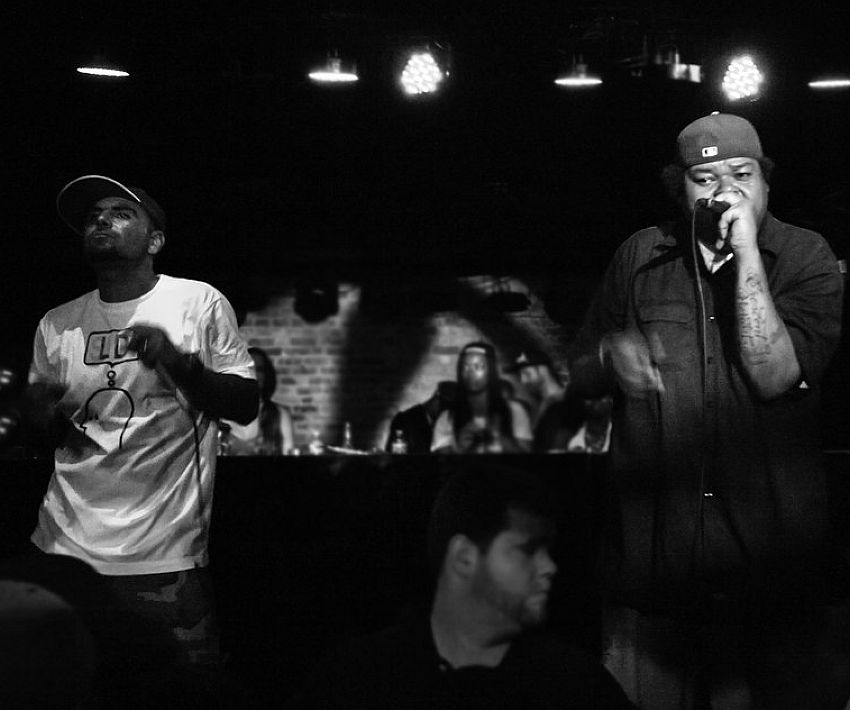 We’re where the backpackers and the gangstas converge for rap journalism. Please support the entirely reader-supported Passion of the Weiss by subscribing to our Patreon.

Too often, we’re dismissive of rap contemporaries. Ghost is Ironman from Shaolin but your homies down the street “just rap.” There’s a lesson here, that otherworldliness can lead to false idolatry and that with constant self-belief pupils can outpace even the wisest of senseis. This exemplifies PUTS, who over two decades made a dozen glowing projects, most of which celebrated everyday West Coast living, mere mortals with bills to pay and tacos to eat. In some ways, they had more consistent album runs than their heroes ever did.

It wasn’t celebrated as such, but PUTS were masters of their craft by 2019 when they announced their retirement. Sincerely The P was a final heat check, a slightly more solemn effort dealing with sons and climate change as much as prior efforts dealt with beer and blunts. After 22 years, they remained every bit the everyman but somehow more personable. PUTS made music for BBQs but there was a chance they’d show up to yours.

I can’t think of a more endearing ethos than what they once said in an interview, something like: “If we don’t get burritos together, we don’t do music together.” It’s a testament to their approach, relatable truths told through the unending benefit of laughter and weed. It’s reductive to say their songs were rear-gazing nostalgia traps. Referencing French dip sandwiches and red eye flights over adept sample sourcing led to songs about raising families in Mid City. It’s like we saw their growth, in real time, aligned with ours. Dispersed between quips about weed quality and Pico Boulevard were moments of real reflection.

Lyrics on “Acid Rain Drops” memorably go: “I struggled all my life to evade the misconceptions; to find a place to live between the negatives and positives.” Deeply, aren’t we all?

A decade or so back, I spoke with Thes One over a couple phone calls and emails around the release of their 7th album, Carried Away. It marked a return to their original imprint, OM Records, where they remained grounded in what made them click to begin with: the ability to be themselves. We touched on classics (“San Francisco Knights” and “Acid Rain Drops”) in an interview that speaks to the importance of managing humility and humor through years of partnership. Double K recently transitioned and is another painful reminder that flowers can and should be given now. What K stood for, and the music he gave us, will be profoundly missed. Condolences to his family and Thes.

Talk about what Double K brings to PUTS as a whole.

Thes One: It’s a very special thing what he brings. No one else can do what he can do. Double has the casual control, and I’m just a ball of energy and nerves. When we get together, it’s the combination of the two that makes it happen. I don’t really try to do hip-hop by myself. When I’m doing hip-hop, I’m thinking about PUTS and I call Double K.

Tell us about making the new album and what you guys were thinking at the time.

Thes One: Making this new album was crazy—crazy in a good way. We dropped Fun DMC at about the same time last year, and right after that we started prepping for our 10- year anniversary show at the El Rey Theatre here in L.A. I don’t think anyone in the industry expected the show to sell out, let alone packed to capacity. It kind of sealed the deal for me and Mike [Double K] and made us think: “Okay, we’re really doing this!” A month later we left to tour China and that was sold out every night. We were working practically every day 9-5 on it, drinking a lot of beer and wine along the way. We locked the studio door and laid down what we were feeling. It’s awesome that people other than us like the record! We were grabbing anything we could to get ideas and moods down on tape. Everything from Mexican psychedelia to folky beard shit.

As a producer and collector, you’re always looking for vinyl I’m sure. What’s the last record you scored?

Thes One: 1619 Bad Ass Band. It’s been on my want list for a decade and Cool Chris at Groove Merchant in San Francisco recently hooked me up with an original pressing for $800. I couldn’t complain at all! That’s what we’re in this for. Buy records, sample records, make money, buy more records.

Has your outlook towards collecting changed now that you’re older?

Thes One: I used to have a blast dragging Cut Chemist to this record spot even though I knew we wouldn’t find any records. It was it was a good opportunity to talk a bunch of shit in the car and get a turkey burger at Tom’s Farms outside of Lake Elsinore. So I go in with that mindset. I don’t expect to find anything but I know if I just sit back and enjoy the ride, I’ll have an experience to remember my whole life. It’s all about the process of searching.

Let’s talk about a couple classic PUTS tracks. Tell us what you and Double K experienced in San Francisco that made you write “San Francisco Knights.”

Thes One: We just had a blast! I think at best Mike and I are fun, party type guys. We’re the dudes constantly joking around at the airport bar drinking a beer waiting for our next flight. You know, we had to keep doing us. I’ll let the bandana rappers do the bandana rap, that’s not us. We were just kids, you know, drinking and smoking and acting stupid in a new city. We made that song in 1996 so we were just feeling the vibe of that whole time, our age, and all that. A lot of exactly what happened is documented in that song.

Compare your first record versus your later work. What goes through your mind?

Thes One: Well, man, we were just kids when we made the first album. We didn’t’ really even make it to be an album. We were just rap fans who were recording songs because we loved hip-hop so much and had always been a part of it. By 1997 we were thinking, maybe we should pull these together and release it as an album. But even then, I was thinking nobody aside from me, Mike, and our homies would like it. I even had a homie named Ben who worked for Sony at the time. And he basically said, “Dude, I don’t think you guys are good enough to put this music out.”

Thes One: We released it in 1998 and were completely shocked by the overseas response we got. It just took off from there and we never looked back. I guess the biggest technical difference is that the first record was made on an 8-track tape. And we were mad shaky on the mic back then [laughs] but our heart was in the right place.

You guys always give nods to the past hip-hop you grew up on, like on “Check The Vibe” where you pay homage to Tribe. How has that era affected your own stuff?

Thes One: Tribe has been a huge influence; all of Native Tongues, D.I.T.C., Flavor Unit, etc. There are so many people to cite when talking about influences, you know? But tribe just had such a distinct style to them, a creative direction and vision, and I like to think we kind of have our own as well. They were never trying to be lyrical miracle mathematical MCs, but they still made some of the most classic archetypal rap albums.

We need to touch on “Acid Raindrops.” It resonates so much. What do you remember about it?

Thes One: Well, it started with the beat. It was a pretty good beat but what made it really memorable for everyone was the chorus, which was penned by an emcee named Camel, who is the first one who raps on that track. Shout out to Camel! As far as the particulars of the beat, I know one of the things that gave it traction was this drone tone that’s running through the low end. It makes it knock. The way the whole song is structured, it kind of chills and then reveals itself at the chorus. So that’s why I think with that right chorus it made it really popular for everyone.