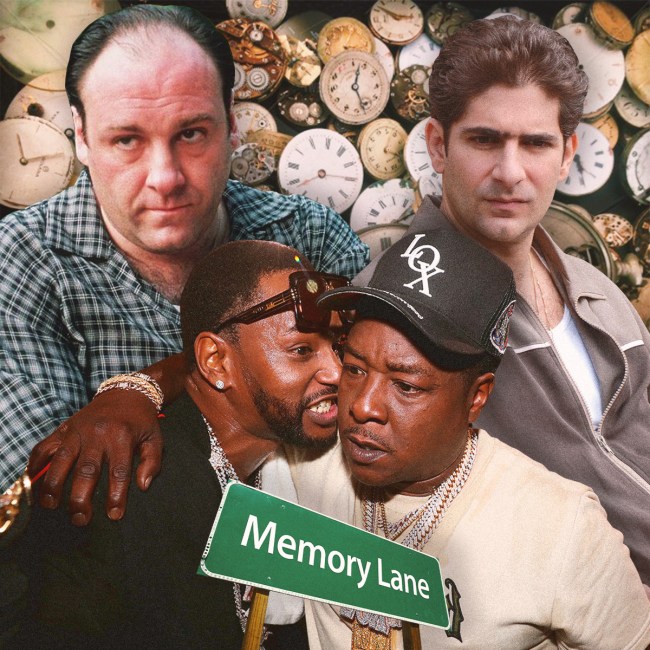 Protect this thing of ours: support truly independent journalism by subscribing to Passion of the Weiss on Patreon.

The only real gift of middle age is memory. As someone who is officially closer to 50 than to 20, I remember when The Sopranos belonged to a different generation: parents stored the DVDs alongside VHS copies of Broadcast News and Platoon in the family credenza. I remember a different era of rap narratives too: The Lox’s departure from Bad Boy for Ruff Ryders merited a street team campaign and single once upon a time. As the concert t-shirt of life reads: I WAS THERE. Rap and mob stories: did anything mean more to me as a young man?

A month ago, The Lox’s disposal of Dipset during the most consequential edition of Verzuz represented a victory for unfussy professionalism. Styles loomed, Sheek flexed, and Jadakiss wielded his Mephistophelian exhales and serrated, 100-pure-Yonkers accent to string together slant rhymes and images (“lace your Nikes: if you see Narcs jet / I’ll meet you in the morning in the park doing sets”) fit for a Chester Himes novel. Dipset had a thousand people onstage and little else. Juelz Santana ended his literal on-stage nap to accuse The Lox of not having any songs for women and Jadakiss had their DJ trot out their exceptionally good work with Eve and with Mariah Carey. The competition was not close.

Their onstage failure feels funny for a rap fan of my age because Dipset was a big deal a decade ago: they were a drove of Harlem peacocks with an effective charm that was a blend of insouciance and branding. They were influencers before we had the term. Cam’ron embarrassed Bill O’Reilly on his own show years before any comedian tried. Juelz and Cam’ron have funny lines. Jim Jones excels at shouting imperatives. Dipset drove pink cars, worse pink furs, and released half-mesmerizing half-dire free association verses to a loyal fan base and—let’s be real here—benefited from a deeply online white cognoscenti who clung to Dipset the way they would have clung to a stylish, muddled post-punk band had those white kids been born in Newcastle instead of in West Islip.

But my memory plays tricks on me. I’ve been a Jadakiss zealot since the “Honey” remix and my resistance to all things Dipset was a point of pride in my college days. I liked being the white kid who wrote about rap and who did not care for Cam’ron. In truth, The Lox have no five-star album and Cam’ron wasn’t quite lying when he called them the “best peas and gravy of all time” onstage. Had The Lox peaked a few years later and benefited from the storm surge of Internet rap content from Okayplayer to Datpiff to Stylus, would their fate be any different? Could I have tried to gin up a conversation about We Are the Streets in six hundred words in 2006? Do Jadakiss’s exquisite guest verses and remixes even need essays to champion them?

My happiness about witnessing Jadakiss receive his long-overdue laurels dovetails with another “remember when” tonic: I’ve spent the pandemic re-watching The Sopranos alone and then witnessing the show connect with Generation Z online. I feel delighted that the youngsters on my feed fire off screencaps of Tony slouching in Dr. Melfi’s office or reply to a tech executive’s banality with Meadow quoting Madame de Staël. The Twitter account “Tony Soprano Crying To Songs” puts Japanese Breakfast over Tony weeping in his car and I love it. Some unknown genius photoshopped the show’s four male leads onto the cover of Slint’s “Spiderland” and I doubt I will ever feel more seen.

Tony Soprano crying to “Kokomo, IN” by Japanese Breakfast pic.twitter.com/kzYMztM13e

There’s an organic connection between The Sopranos and zoomers. The show’s jet black humor and existential depths — going about in pity for yourself, searching for your arc, feeling like you’ve come in at the end, beautiful innocent creatures — make perfect sense to young people who rightly see college as either a luxury lounge or a racket, who witness the permafrost burning, who see their neighbors go nationalist and their uncles and aunts clog Sun Belt ICU’s to show epidemiologists what freedom really means. To take it to the level of pure metaphor: Livia Soprano represents the maudlin, resentful boomers who want us dead; the perpetual threat of the New York mob (Johnny Sack, et al…) represents both the encroaching tech oligarchy and inevitable climate apocalypse; AJ Soprano represents either Logan or Jake Paul.

For me, the geriatric millennial, my Sopranos obsession has deepened thanks to a podcast. Talking Sopranos, a podcast about The Sopranos from Michael Imperioli (Christopher Moltisanti) and Steve Schirripa (Bobby ‘Bacala’ Baccalieri) has become essential to my daily existence. In an 18 month span in which I’ve socialized with almost no one beyond my household, a time in which I—like you—have missed funerals, weddings, celebrations for new babies, chances to sit in a bar and listen to an old friend vent about the emotional crevasse that is divorce, Talking Sopranos has become the best substitute for camaraderie I know.

I know of no other podcast in which a discussion can move from one man asking another whether Chinese-American style ribs “count” as ribs to whether—after a lovely long pause—murder is ever acceptable. I have learned more about Tony Sirico’s (Paulie Walnuts) olfactory sensitivities than I thought possible, and I have heard two men talking about fear, ambition, and the “bullshit” of everything outside friends and family. There’s earned wisdom when Schirripa talks about his decision to leave a successful career booking comedy acts in Vegas after being an extra in Casino to become a struggling actor and then a day player on The Sopranos before becoming a beloved supporting character with a monumental performance in final season premiere — the magisterial “Soprano Home Movies”—that rivals the work of anyone on the show not named Gandolfini or Falco.

There’s a posthumous feel to the podcast too. Imperioli sounds like the spiritual photo negative of Christopher Moltisanti, or maybe Christopher in a particularly benevolent afterlife: where the character of Christopher was all churn and pathos and self-sabotage, Imperioli is a practicing Buddhist, a musician committed to preserving the New York rock scene. His Instagram presence speaks to the man in full. There’s no tragedy on the podcast when he talks about how late he and the rest of the cast would stay out, how much wine and tequila and bresaola have flowed through his body; it’s a part of his past in the best sense.

Schirripa, whose performance as Bobby evinced a decency and calm that felt almost bovine, is the firebrand of the podcast. Schirripa remembers restaurants that served him bad fish a decade ago and he remembers everyone who ever did him wrong in his previous career as casino booker—an early episode rant about Ellen DeGeneres’s snubbing of him at the Emmy’s should become a motivational poster. Schirripa issues life lessons as one should: loudly, repeatedly, and with the urgent sense that you will indeed be a ungrateful motherfucker with snot left in your room service club sandwich if you don’t tip generously at every stage of a hotel stay.

It’s a potent and elegiac thing to know when you’ve had a peak experience. That dull, dull word “success” in American English usually means money in the way that that prick Thomas Jefferson used the saccharine “pursuit of happiness” where John Locke at least had the stones to say “property.” But when people are interviewed on Talking Sopranos, they talk about “success” in terms of something bigger: resonance. Their brief scene in the back of the Bada Bing that hits with the menace and humor of Pinter. Their careful work making Carmela’s accessories reflect her perpetual willful ignorance of her family’s blood money.

In the episode recaps that occupy the second half of each episode, Imperioli and Schrippia mention each guest actor by name. Imperioli has an encyclopedic recall of New York actors, from people he overlapped with at SUNY Purchase, to people from downtown experimental theater, to that one elderly character actor who stole a scene in a second-tier Sidney Lumet movie and did the same thing three decades later in a Sopranos episode.

So maybe The Lox’s shared moment of acclaim and Talking Sopranos speak to the most democratic and existential ideas of art: you make it for a while, you try to cultivate an individual energy through your work, maybe someone notices, maybe a few people notice and you earn an audience. And then the moment passes and you return to life and prepare to make more art.

I don’t know. Maybe it’s just my age. Maybe it’s my own attachments and favorites—Jadakiss and Carmela Soprano and Steve Schirripa’s unwillingness to let grudges die—that makes this confluence of late ‘90s nostalgia sing right now. A winter of hellish breathing issues as an infant left my now-healthy 5 year old son with a raspy voice and a two-step “ha HA!” laugh-growl that sounds remarkably like Jadakiss’s scattergun cackle. For my family I cook Sunday pasta dishes from recipes found in ultimate Sopranos villain and Goodfellas scene stealer Frank Vincent’s memoir A Guy’s Guide To Being A Man’s Man. I found a few grey hairs along my temple the other day and thought about dyeing the sides of my hair silver, giving myself the wings that would match my inborn Paulie Walnuts-levels of grumpiness. I have never seen the “Aston Vanquish the color of dandruff” that Jadakiss described once, but I will look for it until the day I die. There are worse impulses than ‘remember when,’ and, as a man once said to his family over dinner as a storm raged outside, “if you’re lucky, you’ll remember the little moments like this, that were good.”

Jaden Smith Brings Out His Dad At Coachella

Cyrilia Finally Delivers New EP This Is Me