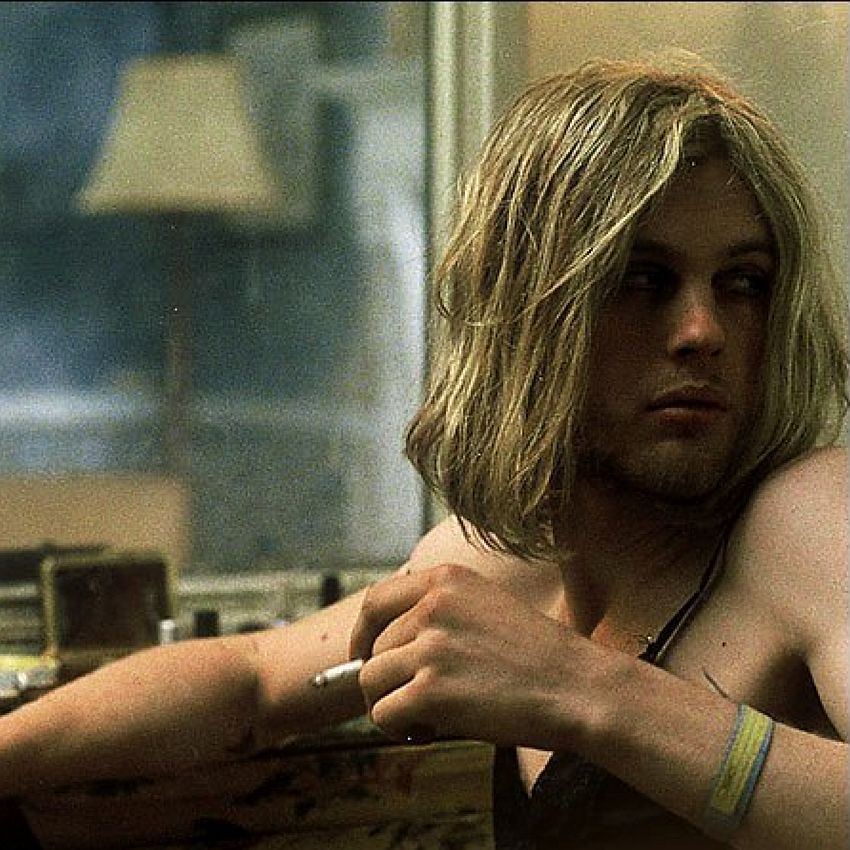 Taken from the movie ‘Last Days’

Please support our collective of pop culture savants by subscribing to Passion of the Weiss on Patreon.

Teenage angst has paid off well. Now Thomas Hobbs is bored and old.

Music biopics are often weighed down by sentimentality, terrified of the demons they might uncover if they probe too much around the flawed human beings being eulogized. The highest grossing music biopic of 2005, Walk The Line, is a fine example of this. As a film it cares more about fulfilling mainstream audience expectations for an energetic love story than exploring the darkness that sat at the heart of Johnny Cash’s music. It’s a sanitized slice of the great country artist’s complex life story.

This backdrop makes the existence of Gus Van Sant’s morose, Last Days, feel more like an anomaly. A film that shows Michael Pitt’s rock star Blake (based on Kurt Cobain) wandering around a rotting mansion in a catatonic depression in the days leading up to his suicide, it was released just a few months before Walk The Line, and barely made a splash at the box office (it earned $2.4 million compared to Walk The Line’s $187)

It confused critics due to the fact very little happens beyond the viewer following a rock star making cereal while looking like he’s had all the life sucked out of him. There’s no conventional storyline besides shadowing Blake as he slowly withers away, and it feels like the film’s intention is to offer a very different cinematic interpretation of fame to films like Walk The Line.

Blake is portrayed by Pitt as a ghost in his own house. The only thing that brings him a morsel of pleasure is digging up a box of heroin he’s buried in the garden while successfully avoiding conversations with the pretentious hanger-ons who leech off his fame. At one point, he jumps into a freezing cold lake naked— it isn’t to relax, but just so the empty rockstar can feel something.

In an interview promoting the film with Filmworker magazine, Van Sant suggested it was important to avoid the sugary mythology that so often surrounds our rock heroes. “What really happened to Cobain [just before he died]?” he said. “Probably not that much. He probably just wandered around the house.”

Life barely flickers around Blake and the camera stalks him like the spectre of death itself, the hazy colors reflecting how he feels out of tune with the world. “The camera just sits there,” Van Sant explained further. “It’s always placed at the same heights and in the same place in every room.” The cinematography makes it feel like you’re at eye level with the character, exchanging paranoid glares. As a result, this claustrophobic film is difficult to look away from; a train wreck you feel oddly compelled to keep on staring at.

Throughout its 95 minutes, various people come to visit Blake, including two Mormon teenagers and an exploitative print advertising salesman. This is alongside the groupies who visit the mansion in the hope of mining Blake for career advice and the tour manager who calls to try to convince him to re-engage with audience demand. He’s barely able to form whole sentences, mumbling his anxieties under his breath. These people all try to force Blake into selling something of himself despite the fact he’s clearly in need of help and in no fit state to engage with the world.

It’s perhaps a metaphor for where Cobain found himself with his label and bandmates during his last few months on earth; seen more as a commodity than a human being in pain.

By all accounts, Kurt Cobain reached a level of fame that left his ego feeling completely shattered by 1994. In the last few weeks of his life, he wasn’t at all comfortable with Nirvana becoming a buzz word on t-shirts or the word Kurt becoming synonymous with the sex symbol tag (things hinted at in his suicide note). He missed the days of playing small sweaty clubs and being able to walk down the street unrecognised.

He started Nirvana as something that was anti-yuppie, but now yuppies were buying Nevermind for their kids in hordes. Kurt dived deeper and deeper into heroin in order to zone out from this unbearable noise, as well as to get some relief from destabilising stress-related stomach cramps. By choosing to tap into these isolating emotions, Last Days avoids the usual underdog-makes-it-big cliches music biopics force down our throat. 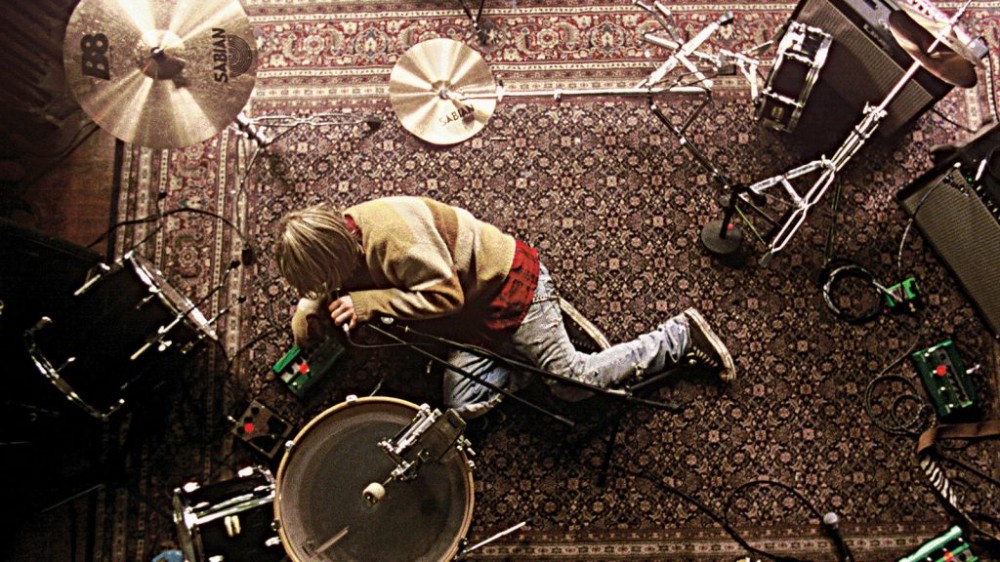 From the movie ‘Last Days’

Hollywood biopics tend to suggest our favourite rock stars were creatively inspired right up until taking their last breaths. Crucially, in Last Days, Blake doesn’t record the next great grunge song in an energetic break from being depressed – he is only capable of letting out painful sounding howls while prodding out uneven guttural licks on his guitar. The two darkly lit scenes that show him actually creating music feel more like primal scream therapy than an artist living out their dream. So many legendary musicians died after falling out of love with the one thing that truly gave them pleasure, and Last Days is the rare film that doesn’t shy away from exploring this.

Unlicensed music biopics, which lack a co-sign from the estate and can’t use any of their late subject’s real music, often fall flat, but the lack of support from the Cobain Estate actually works to Van Sant’s advantage. By turning Kurt into Blake, the director is free from the hagiography the Estates of artists often force into licensed music biopics; he doesn’t have to dress anything up.

Whether it’s director Oliver Stone turning Jim Morrison into a dreamy-eyed poser (“I feel the universe functioning perfectly, but I’m still perfectly locked inside myself. Instead of oneness, I feel isolation!” half-whispers Val Kilmer’s Morrison like a trust fund kid who just smoked their first joint) or Dennis Quaid’s cringeworthy, lip-synched karaoke as Jerry Lee Lewis, cinema has its fair share of atrocious music biopics that serve the opposite purpose from Last Days’ unflinching honesty. But even by Hollywood’s low standards, there seems to have been an acceleration in bad films about beloved rock stars over recent years, as a conveyor belt line of lifeless music biopics continues to surge forward.

Mawkish YouTube impressions by lead actors fuelled truly terrible releases such as Notorious (2009), I Saw The Light (2015), Nina (2016) and All Eyez On Me (2017). Each of these films avoided controversy at all costs, barely scratching the surface of their respective subject’s demons. And the fact that Rami Malek won an Oscar for wearing some fake teeth and camping it up as Freddie Mercury in 2018’s syrupy box office smash Bohemian Rhapsody, means that we can expect even more of these films in the future. There are now planned studio films about Aretha Franklin, Bob Dylan, Amy Winehouse, Madonna, and trap god Gucci Mane.

This trend of bad, surface-level music biopics was personified in 2020 by Stardust, an unlicensed film that reduced David Bowie’s complexity to the kind of sentimentality found in one of those manipulative pre-performance clips when an American Idol contestant reveals their grandmother recently died. By turning the Ziggy Stardust-era into a soppy road trip adventure and Bowie himself into an opportunistic art student who wears kooky masks while getting laughed at by music critics, Stardust (and its sedated lead performance by posh boy Jonny Flynn, who has none of Bowie’s bite or wit) takes away all of the nuances and contradictions which made the Thin White Duke so compelling in the first place. Stardust can’t be bothered to probe at the flawed human being (Bowie had highly problematic relationships with race, women and drugs), preoccupied more with tapping into the tried and tested formula of the Hollywood fairy tale.

Last Days remains the antithesis to these syrupy kind of music biopics. The film doesn’t frame Blake as someone who has committed suicide, but someone who is a casualty of fame. It has no interest in playing a children’s choir version of “Smells Like Teen Spirit” over a montage of Kurt Cobain looking moody and reflective, or pretending Nirvana’s MTV Unplugged had all the euphoria of a World Cup final, as he gets closer to pulling the trigger (FYI: I’m sure that film will exist in the future, and an unbearable pop star with no acting experience will be given the lead role). By the time Blake finally pulls the trigger, he is so consumed by the black hole in his head that he can barely feed himself, let alone feel empathy for his daughter. It feels as if Van Sant’s ultimate intention is to explore what the music industry reduces artists to.

In the film’s most important scene, Sonic Youth’s Kim Gordon has a cameo. When Gordon suddenly appears to give Blake a pep talk, which may or may not be a hallucination, it shows us how tortured artists can rarely be reasoned with. Hollywood so often tells us that legendary artists in their final moments had crystal clear, Wikipedia-style reflections of all the good things they did in their lives. Yet Gordon, who was a mentor to Cobain in real life, barely gets a reply from Blake beyond an inaudible mumble. She asks Blake if he ever apologises to his daughter for being a “rock and roll cliché,” hoping to wake him out of his drug-addled slumber. It doesn’t work. Given how formulaic music biopics tend to be, this feels like a radical moment, as Van Sant avoids sentimentality at all costs.

Every single year a bad music biopic is released that problematically skirts over an artist’s demons or frames their death as a soppy triumph, Last Days deserves to gain more power and relevance. Fifteen years on from its release, it feels more necessary than ever before. It proved that when music biopics tap into emotion rather than sentimentality, they end up providing us with a lot more truth about how our favourite artists lived their lives.