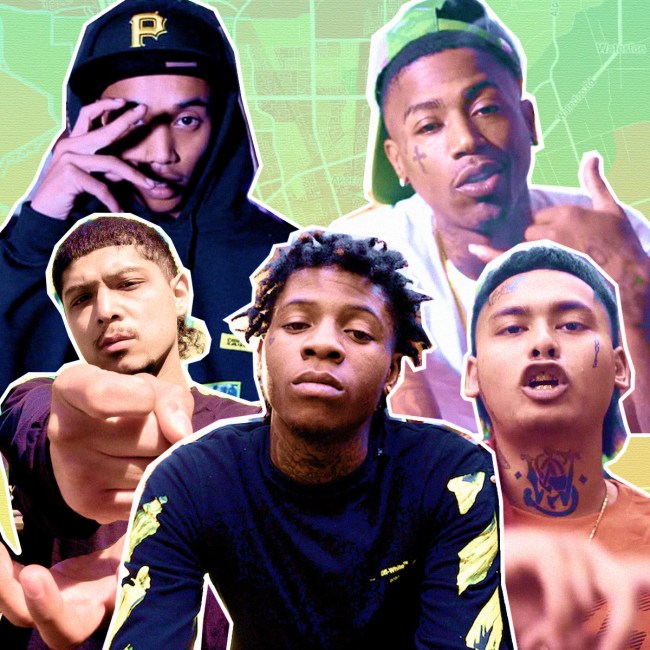 Playlists on playlists, exclusive stories on stories. From discovering and detailing Stockton, California’s finest to solving hip-hop’s murder mysteries, we do it all for the love of the game. Show your support for our talented writers by subscribing to the Passion of the Weiss Patreon.

Harold Bingo‘s inner monologue speaks to him in the cadence of Detroit flow.

Even the most casual fans have pegged San Francisco and the Oakland/Vallejo area as the most essential and historic regional cradles of Bay Area rap. While Sacramento has become a musical kindred spirit about an hour and a half away, producing torch-bearing artists like C-Bo, Marvaless, Brotha Lynch Hung, X-Raided and Luni Corleone,. In recent years, the Bay Area’s first cousin has truly come into its own with the respective rises of Mozzy and the late Bris. Now, at long last, Stockton is elbowing their way into a seat at the table.

One of the first signs that the city was onto something special came when one of MBNel’s songs caught the attention of the San Francisco 49ers. “Born To Win” was used in a 2019 team hype video and he was even the subject of a glowing report from the local ABC affiliate. At the time, the idea of a local artist with Spotify play counts in the millions was novel. As a Filipino Crip, he set the tone for the city and paved the way for more street rappers of Asian descent.

2019 was also a big year for Haiti Babii, who went viral for a freestyle that felt like someone violently shoving Thug’s “Drippin” flow into the most insane extreme possible. 2018’s “Change Ya Life” is another common entry point, thanks to TikTok (what else?). These momentary glimpses belie the level of talent he’s displayed over the course of five mixtapes and a wide range of loosies (this joyride over the “Still a G Thang” instrumental remains a delight. Both are still very much an integral part of the scene, but a changing of the guard is clearly taking place.

The city is now commonly associated with a whispery flow, popularized (but not necessarily patented) by Sacramento’s Bris. There’s no denying the late Fruitridge rapper’s influence, but artists like Young Slo-Be and EBK Young Joc have created their own unique take that isn’t necessarily indebted to him. Unfortunately, he is no longer here to crank out incredible collaborations with Stockton artists on a startlingly regular basis. While his spirit continues to loom large, Stockton continues to forge its own path. Here are five of my current favorites from the Central Valley city.

Like Haiti Babii and MBNel, Slo-Be also came to prominence in 2019, dropping two solid tapes and some great collaborations. “2100 Shell Kases” served as something of a springboard for Slo-Be and the EBK crew (we’ll get to them in a minute). 2020 was when he began developing a strong connection with Bris, dropping 2 more impressive tapes. As one of the aforementioned Stockton artists who collaborated extensively with Bris, it’s tempting to lump them into the same box. He may deliver his lyrics in a similar register but collaborations like “2142” lay the difference in their approaches bare.

Slo-Be may not be as playful but as a more straightforward writer, he still finds flows and cadences that sound deceptively simple. He has a way of hesitating periodically that gives his verses a more conversational feel. He favors darker production and has a knack for memorable lines (“K get to jerking like a New Boy”, “pop an opp on the first trip, that’s a hole in one”. Slo-Be is also quietly building a formidable catalog of solo tapes, March’s Red Mamba is a standout. His other tapes have felt somewhat slight, more glimpses at his full level of potential. Whereas Red Mamba shows the breadth of his talents, with no skippable songs and countless rewind worthy moments.

The whole EBK clique is talented. JaayBo’s sense of humor stands out and he’s been on a tear of standout guest appearances. Trey B is funny too, but he’s more understated, with a hesitation-heavy flow. He’s also got one of the best takes on “Wack Jumper.” But EBK Young Joc has emerged as my early favorite.

He’s got great beat selection, with good taste in the expected local flavors and a willingness to tap into the Michigan-California pipeline (Enrgy is always an inspired choice (see here and here). Like Trey B and JaayBo, he loves cracking jokes but his whisper has more sharp edges. It’s less a menacing hiss and more of an annoyed mutter, which ironically enough only makes him sound more menacing. Something as off putting as “Demons in my ear, have you ever talked to Satan?” exists as a casual aside from the typical shit talk.

Far from a Bris disciple, he attributes his flow to his deceased brother and doesn’t have much interest in hooks. No matter. He can accomplish more in a minute and change than some can with three verses and the melodic chorus. Last year’s The Fresh Prince of Belair tape is a good place to start. 2019’s 21 Jump Street is no slouch but Fresh Prince is a clear step forward from a songcraft standpoint.

Acito raps with a gravitational pull, as if everything he’s telling you is the most important thing in the world and you need to know about it right now. He can be incisive like on “Deep End” (“finally took a trip, now he feel different” https://www.youtube.com/watch?v=Zx-14TUVjhs) or paranoid (“risk taker, I take chances almost every night”) depending on the bar.

He’s prone to reminiscing, understandably so — like on “38 Shooterz” (“almost died too many times, I gotta keep it on me”). Every stoplight is a potential death trap, things can go left at any moment, there’s always a reason to remain wary. He specializes in “you don’t want to live this life” lyrics in a way that reminds me of Mozzy. I could easily envision him sounding right at home on a posse cut with E-Mozzy and Celly Ru.

There’s also something very endearing about any artist who starts their first tape off with a tribute to The Jacka. Acito’s also no stranger to songs without hooks, like on “72 Barz.” Last November’s Candle Lights and Calicos is strong and he’s got loosies galore. “Still Jumpin” is a highlight and take on Louie Ray/YN Jay-Triple S and “Detroit Flow” uses the sort of jittery chase scene instrumental favored by Icewear Vezzo or Peezy, with a less tongue in cheek twist (“I just mind my business while I’m getting to the bag”). That’s not to say his lyrics are humorless, he’s simply not in the mood to crack jokes — unless it’s at an adversary’s expense.

Meek doesn’t have a full tape yet at the moment, but that hasn’t stopped him from rapidly becoming a Stockton staple. “Pinocchio” sums up his appeal in two minutes flat. A song where your face scrunches before the bass line lands and the hook (which may or may not have been partially cribbed from Bris on “Adios”) is sure to tattoo itself onto your brain . “Ugh” is more of the same, another earworm custom made for infinity car plays.

He picks great beats, ranging from tasteful traditionalism to off-kilter samples on “Strips.” Take “Popeyes” — “We sent location, you got no whip so you can’t go” or “still thuggin’ on the block, ain’t shit changed” don’t leap off the page but with Meek’s delivery they become anthemic. Some may know him because of his beef with $tupid Young, but that tempest shouldn’t detract from his obvious talent. Long story short, Meek had recorded to the aforementioned “Ugh” beat last August but didn’t pay for exclusive rights to the track, under the belief that no one would steal it. Young decided to poke at Meek by purchasing the beat outright and reimagining “Ugh” as “Huh”, declaring that he would “do more numbers” with his blatant theft. Ultimately, both songs topped out at around 500,000 on YouTube, rendering the whole thing a wash.

While Javn2900 has much less music out than the rest of this list (save Meek). “Island Baby” is the type of song that is far more than the sum of its parts. If I told you it was a display of athletic rapping with a melodic refrain, you’d probably start rolling your eyes before you finish reading the sentence. You might be imagining the played out two bar guitar loop right now. There’s something more understated about “Island Baby” though. It feels less like something designed to fit into melodi-trap Spotify playlists and more like a song that easily could have existed 10 or even 20 years ago.

The insistent piano and familiar synth whines that drive “Island Baby” are also present on “Thru Da Bity” but “Lay Down” is more of a showcase for his rapping abilities, as he cedes hook duties to BounceBackMeek. The fact that “Koold In Da Summer” doesn’t have a visual is a shame, it’s the proto “Island Baby.” He favors a summertime bounce but there’s an uneasy edge to it. It’s music for when it’s still 80 degrees at midnight.