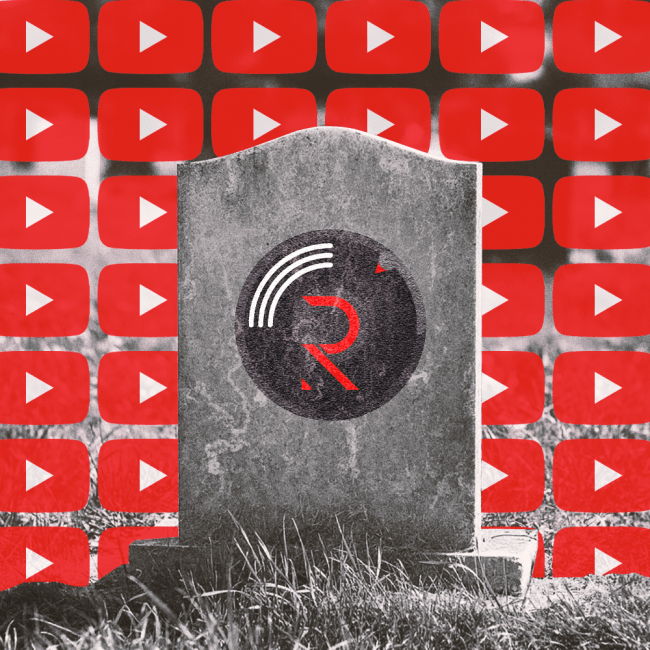 Support our tireless team of writers championing one of the last great sources of independent music journalism by subscribing to Passion of the Weiss on Patreon.

Will Hagle wants you to know that today is also capitalism’s fault.

It’s all fun and games until the cease and desist hits. Since the dawn of the video platform that Google acquired for $1.65 billion in 2006, YouTube has been a cesspool of blatant copyright infringement. A search for your favorite LP plus the keywords “FULL ALBUM” will find you what you’re looking for, even if the tracks are broken up into playlists featuring uploads from different users — or the entire ABBA’s Greatest Hits plays back in Swedishly demonic half-speed to duck the algorithm. Despite the content ID power plays of recording industry giants (good luck finding an unofficial Kanye song) and the advent of subscription service YouTube Music, the company either can’t or has chosen not to crack down on the expansive library of streamable music.

Because YouTube offers free access to a theoretically limitless collection of songs that lack a video component, it provided an ideal database for innovative A.I. companies to build upon. At the forefront was Rythm, a 5-year-old startup whose Patreon claims is “creating the future of music listening.” Along with a few other upstarts, Rythm built a bot that could be integrated into Discord servers. Friends or strangers could hang out in voice channels together, requesting songs for the bot to pull from YouTube in real time, like a virtual venue with an accessible jukebox. Because the bots pulled from YouTube, the library wasn’t as vast or polished as Spotify or Apple Music.

But because YouTube is selective about its copyright crackdowns, you could almost always listen to what you wanted to hear. Type “_play abba greatest hits full album” and the Swedish half-time demons would come growling: “I DO I DO I DO I DO I DO.” Type _voteskip and the channel could spam thumbs-up emojis to overrun the Abba request, moving on to some trash EDM banger a random dude you haven’t seen since the pandemic had to hear. Mute the bot, play whatever computer game is slowly sucking your soul away and come back when your 15th request for “RIP Young” comes back on.

It was a fun, harmless way to enjoy music together. It evaporated the lonely feeling that comes from streaming music in isolation, and made sharing and discovery collaborative again. The bots had names: Rythm, Groovy, and Octave. By the end of the month, due to the slow and erratic swing of the digital guillotine in Google’s legal department, all three will be dead.

After 5 years of service and over 20 million users. Rythm will be shutting down on September 15th

This is not the end! We have been working tirelessly on a new project that we can’t share yet! If you would like updates on this, check out our site here: https://t.co/iw2K1yWv5T ❤️

These bots are by no means niche. Rythm reportedly had 560 million users. They’re an integral part of more than a quarter of all servers on Discord, a social app which has experienced an insane swell of usage and monetary interest in recent years. Discord is now valued at $7 billion. It has 140M monthly active users, and generated $130M in revenue in 2020. Created as a platform for gamers to talk to each other while playing, Discord has and will continue to have value outside of its music bots. But their collective death is a reminder that any enjoyable new way that music lovers find to consume and share art together can be swiftly ended in order to appease corporate interests.

Google can’t accurately be depicted as the objective antagonist. The recording industry, of course, has historically been at odds with the tech behemoth’s relatively lackadaisical approach at honoring intellectual property on YouTube. Music piracy is, also, technically illegal. The recently-issued cease and desists mention a breach of YouTube’s terms of service, which prohibit the use of the platform for commercial purposes and any service modifications. As a YouTube spokesperson told The Verge about one case, “We notified Groovy about violations of our Terms of Service, including modifying the service and using it for commercial purposes.” Big Tech vs. music purists is the easy narrative, but Rythm and the others were making money off people streaming songs that had been uploaded by people who didn’t own the rights in the first place. It’s a complicated mess, and it’s sad that it’s ending this way.

Except it isn’t the definitive end. Rythm’s homepage says “we started working on something big at the start of this year that we’ll be sharing with everyone in the next few months!”  If savvy, YouTube could launch its own music bot and run ads on it. Other developers will inevitably invent something new and unexpected, until this whole legal debacle repeats itself again. But Google’s sudden crackdown is another reminder that companies continuously look to mind-bogglingly end services that enhance the social aspect of the music listening experience.

The main reason it hurts is because it feels so arbitrary. Shutting down popular music bots doesn’t change the fact that YouTube remains one of the easiest places to stream songs for free. In 2021, as a washed millennial whose formative musical years were spent amassing a collection of illicit mp3s, YouTube has become the last remaining place where I know I can reliably rip videos into downloadable audio files. The recording industry and the government both know this too, and that particular intellectual property battle is being fought on a different front of the never-ending piracy wars.

As I’ve written about before, digital music has an uncanny habit of suddenly disappearing at the whims of corporate interest. The best recourse in these moments is to remember that everything is temporary, no one really owns music anyways, and the important aspect of it all is how you felt when you were participating in that fleeting moment of music history. Now that it’s happened again, to a tool that transformed my listening habits, brought me closer to friends and helped me discover new songs and artists, I can’t help but ignore my own advice and fall into a seething rage against the unfairness of life as a music fan in dystopian corporate America. But this is just the Anger phase. I’ll be at Acceptance soon. In the meantime, if you need me, I’ll be in a Discord server somewhere talking to an A.I. system that knows it’s nearing its fateful end like HAL 9000, spamming tilted 40 emojis, requesting one last Abba hit: “So long, see you honey.”

A$AP Rocky Opens Up About His Sex Addiction

Lil Peep Was Considered For Movie Role Prior To Death