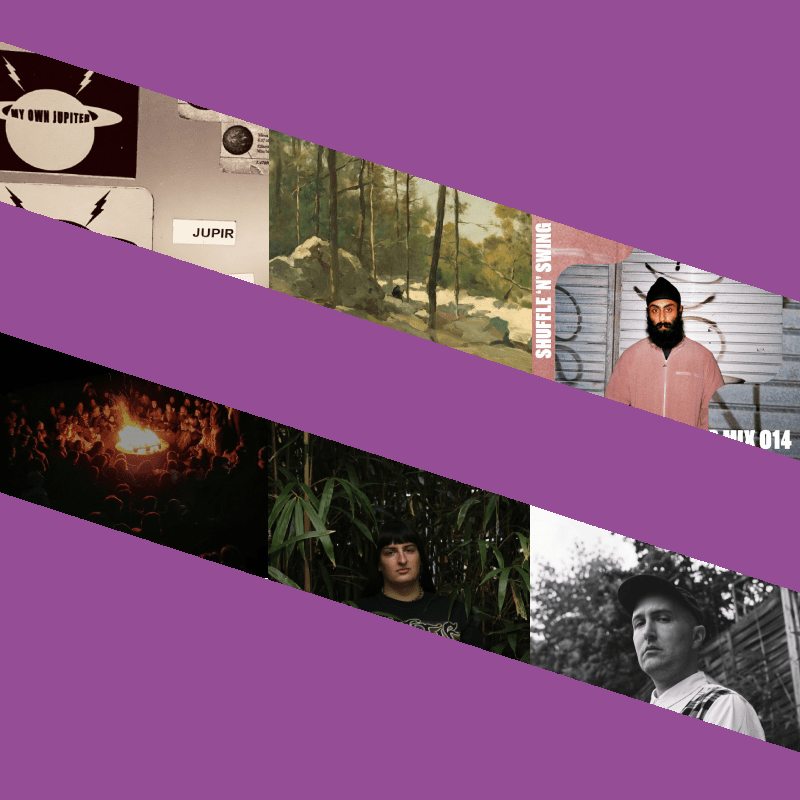 Please support independent music journalism by subscribing to Passion of the Weiss on Patreon.

Michael McKinney is about to sample this little ditty for his next house track.

There’s something to be said for specificity. Last month, plenty of DJs dug deep into sounds they know well and showed off new gems along the way. Big Scraps took a documentarian’s lens to UK drill; elsewhere, East Man showed off his bracing and minimal take on grime. Estoc, The Large and Lauren Flax offered up hyper-focused hardcore sets, diving into the frenetic sounds of gabber, ragga garage, and jungle.

Nicolas Lutz went long, throwing down six hours of firestarting house and techno white-labels; Chryslsm did the same thing, but with minimal techno and ambient music. Yung Singh offered a love letter to Punjabi garage, the dance music he grew up on. Lastly, Philip Sherburne and the folks behind NTS’s Time Is Away both conjured lush clouds of ambiance.

Here are some of the best DJ mixes October had to offer.

The sonic footprint of UK drill is hardly a secret at this point: icy basslines, skittering hi-hats laid just so, air-raid sirens, and gritty MCs. Just as palpable, though, are the narratives around the genre. According to innumerable public officials across London, the style is responsible for surging knife crimes; depending on who you listen to, its basslines are funereal, the gun-talk a long line of all-too-real threats, the lyrics a pretense for life sentences.

On Now That’s Wot I Call Drill, Big Scraps holds those stories against the sound, darkening each in the process. They move from primetime knife talk to pitch-black raps, lacing each with police sirens and baroque horns. The effect is both haunting and propulsive; this is bracing music that balances back-alley threats, racist fearmongering, and incisive lyricism. UK drill has long thrived in the liminal space between autobiography and fiction; here, that line is blurred ever further.

Minimal techno lends itself to patience; the style is built on exacting construction and the eddy-like draw of a stretched-out groove. On the hundredth edition of Silent Season’s Campfire Stories series, Chryslsm focuses on slowly growing magnetism. Split into five chapters, each approximately an hour in length, Campfire Series 100 is a quiet and slowly evolving monument to the abyssal power of well-worn rhythms and dimly lit ambience. It is also strikingly beautiful; while much of the set is filled with a pitch-black churn of kicks and hi-hats, sun-kissed synthesizers peek through even the most turgid of currents. Each new selection deepens the mix’s trance; bit by bit, the swirl grows in both depth and power.

As East Man, Anthoney Hart makes serrated and sputtering grime; it’s an acidic and stripped-back take suited for icy and precise emcee work. His mix for Ransom Note, which runs through twenty-odd originals and edits in under an hour, is woven with the same sonic threads but is even sharper. The percussion is punchy and strikingly minimal; even the busiest drum workouts are just a kick, a few toms, and a synthesizer or two. The raps come from a veritable murderer’s row of vocalists, and each deliver the gusto and unflappable calm needed for beats this uncompromising. The combination—unflinching vocal performances, skittering percussive minimalism—lends The Ransom Note Mix an icy and hypnotic precision.

Estoc’s DISCWOMAN entry starts with a scorched earth and proceeds to tunnel deep underground. After opening with scraped-metal synthesizers and scurried breaks, the set mutates into darker and darker forms; each slammed kick drum seems to hit a bit harder than the last. She takes the steamrolling kicks and wall-of-sound synthesizers of gabber and builds them into an ever-growing mass of growling bass and screaming top-end. It’s to her credit that it all works; too much weight can get numbing eventually, but she tosses in enough left turns—roughneck breakbeat, microscopic bits of breathing room, an eleventh-hour Beach House edit—to keep things thrilling throughout. On DISCWOMAN 98, Estoc shows just how exciting brick-to-the-face hardcore can be.

In her October broadcast on NTS Radio, The Large—New York’s finest ear for firestarting dancehall and globetrotting dance music—goes deep, showing off the complimentary flavors of UK garage and ragga. Top Cat, a veteran ragga and dancehall MC, hosts. The resultant mix is packed with shuffle-and-slide drum kits and hair-raising vocal performances, whether the latter come from Top Cat or the tracks themselves. Classics from the scene, like Double 99’s bass-blasted “RIP Groove,” share space with test pressings and white-labels that hit just as hard, like Umbra Productions’s slick-stepping “Every Day Its a Gunshot.” The specifics of the selections don’t matter as much as the set’s off-the-rails energy and white-hot MCing, though. For an exhilarating hour, The Large and Top Cat lean hard into the raucous energy of soundsystem culture and come up with something that demands rewinds.

The title fits: Lauren Flax’s first broadcast on Bassdrive has all the subtlety of a bricked window. That’s a good thing. Jungle is often invigorating and complex, full of slippery drum programming and mile-a-minute polyrhythms, but that same hyperfast precision can also create rough-and-tumble thrills at an unbeatable pace. Here, Flax digs into the fast and playful sides of jungle and drum-and-bass, piling screaming blends on top of out-of-nowhere firestarters to winning effect. She keeps it up for two hours, in large part thanks to the sheer range of her selections: white-hot Amen flips, industrial-strength basslines, blistering drum and bass, and plenty of breathless emcees keep the energy up while keeping the mix crisp and varied. As far as radio debuts go, this one’s tough to beat.

Over the years, Nicolas Lutz has built a reputation as something of a DJ’s DJ, largely thanks to a veteran’s touch and seemingly bottomless crates packed with white-labels and test pressings. A recently published live recording from Phonotheque, a small club in Lutz’s home country of Uruguay, shows him making good on his mythos. For six hours, he works with long and hypnotic rhythms, blending house, techno, acid, and breaks into something elliptical and effortlessly propulsive. The groove rarely lets up, but its tambres change so frequently that the time flies by anyways. At times, it’s far-flung and alien techno; flip forward a few, and you may find acid-flecked breaks or slinking house records. Phonotheque 23/11/2019 serves as further proof of how deep and wide Lutz’s crates go.

On Harvest Moon, Philip Sherburne taps into the autumnal chill, crafting a mix with the colors and patience of leaves floating towards the ground. He slowly blends bewitching and elliptical ambiance here, featuring crystalline guitars and monastic drones in equal measure. Over the course of two hours, he folds in a generous range of sounds, moving from hushed folk to mountains of organs and noise before eroding them into foggy ambient techno. But the overall tone remains throughout: Harvest Moon is music for leaning in and slowing down, for crisp air and slow sunsets. The blur Sherburne crafts only deepens here; given time, it reveals an intangible and indelible power all its own.

Time Is Away – Autumn Mix

Autumn Mix opens with a series of hushed marimba arpeggi, moving between two chords and stretching into infinity. This is a deliberate and stilling way to open a radio set, which is fitting. Even at its most unsettled, Autumn Mix is quiet, intimate, and spare. That sense of preternatural calm acts as a throughline for the hour’s selections, which range from spindly folk and slow-motion jazz to baroque pop and spooked chamber music. The mix is, by and large, warm and inviting, working a balancing act between spare intimacy and lushly developed harmonies; even the busiest tracks offer the listener plenty of space. Autumn Mix walks an impressive series of tightropes: spectral but not ephemeral; warm but not cloying; wide-ranging but thoroughly cohesive. Over time, the subdued and richly textured selections reveal a kind of quiet beauty.

As the newest wave of UK garage continues to grow in both popularity and scope, one of the most consistent thrills is seeing what ideas DJs fold into the genre. Yung Singh’s latest mix—recorded for Shuffle ’n Swing, a relatively new label pushing the sound—shows just how chameleonic garage can be. Over the course of an hour, he blends three decades of Punjabi garage and two-step; tumbi and group vocals, it turns out, pair impeccably with shuffling drum kits. This is UK garage at its most ebullient and playful: all bubbling drums, sun-kissed synthesizers, and eye-catching vocal performances. Most of all, though, SnS Members Mix 014 is a one-of-a-kind love letter to the dance music that Singh fell in love with years ago.

Eric B. Reportedly Facing Up To 5 Years In Prison Over 17-Year-Old Case