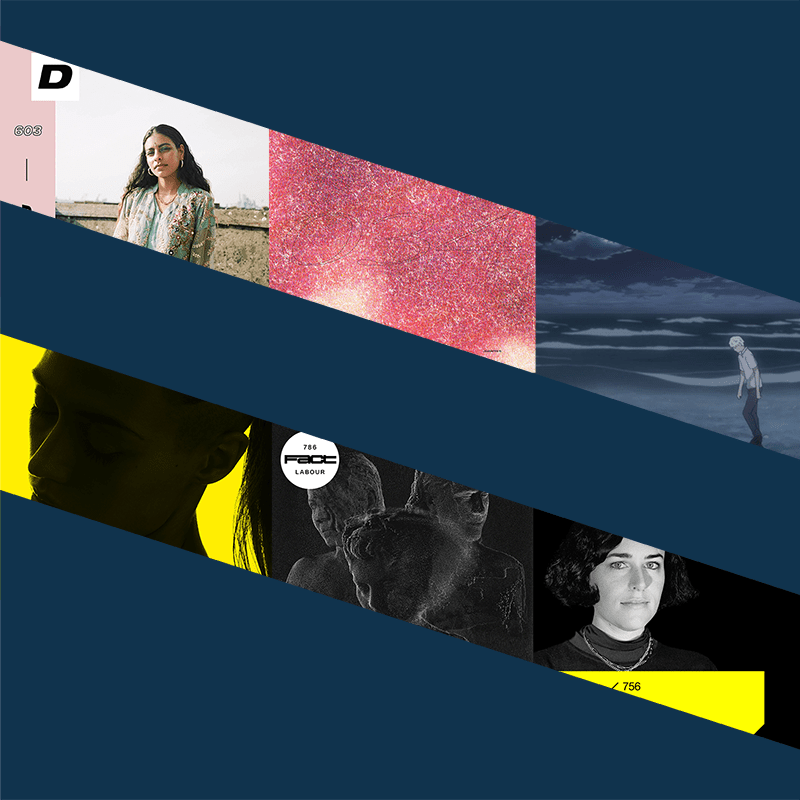 We’re still running because of our love of the game. Please support Passion of the Weiss by subscribing to our Patreon.

Michael McKinney is considering releasing a collection of Chopped and Screwed podcasts.

Escapism is one of the club’s most enduring promises: a great DJ, so the idea goes, can take their listeners to an entirely different place for an hour or two or four. Clubs may still be shut down, but mythos is a powerful thing. Some of November’s best sets play directly into club music’s transportive possibilities. Octo Octa and Eris Drew offered a technicolor rave-up, while Roza Terenzi’s Resident Advisor set is an endless stream of trance bombs. Sherelle’s Essential Mix is a smoldering pile of footwork, breaks, and anything that would rip a dancefloor in half; Zora Jones channeled a long line of club-music deconstructors into a mind-bending post-everything mix for Crack.

Other DJs took a different tack. Several sets from this month forgo the pleasantries entirely, offering up wholly formed worlds from the moment they start. anu, mixing for Dummy, put together a joyous and nostalgic mix of Indian pop, Bollywood records, and hip-hop; Krust showed off his dark and gnarled vision of drum-and-bass. LABOUR conjured a black hole out of Persian folk music and serrated noise; and Claire Rousay offered a close-miked mix of field recordings, interviews, and queasy strings.

Here are some of the best DJ mixes November had to offer.

Speaking about her mix for Dummy, anu—one of London’s most exciting and unpredictable selectors—said that she hopes it “feels like a warm hug for anyone who can’t be with their family this Diwali.” The holiday has come and gone at this point, but the effect lingers. This is an hour of joyous and effervescent records pulled from Bollywood flicks, yesteryear’s Indian pop radio, and deep-dive hip-hop crates. As the jubilant horn section of Kanchan’s “Nanny Wine” melt into Asian Dub Foundation’s energetic emcee work and the sprightly dub of Haroumi Hosono & Tadanori Yokoo’s “Hum Ghar Sajan,” the throughlines—love, play, nostalgia—grow more taut and start to accrue a familiar beauty.

Speaking about their mix for Juanita’s, CCL outlined the stage they envisioned listening to it at: “slinky, shimmery & freaky in the glow of sunrise.” The description fits the soundtrack, too. It’s a wonderfully zonked-out hour that spiders into all sorts of unexpected directions. To take one particularly memorable early-set section: busted drum-line club music gives way to

YEИDRY’s “Nena,” a crisp neoperreo-dancehall cut; a few minutes later, her vocals have melted away to reveal a turgid bed of synths and reverb-soaked drums. Pretty much every transition in the set goes like this, with CCL knocking the floor out and transforming the environment each time. On Juanita’s Mix 034, they erect a hall of mirrors that’s as comfortable as it beguiling.

One of the joys of footwork, one of Chicago’s great whirlwinds, is how many sounds it can incorporate without diluting the power of its hyperactive drums. For his Dekmantel podcast, DJ Earl puts together a rubbernecking hour of the stuff, blending low-oxygen synthesizers, hyper-precise percussion, and all sorts of emcees—Jay Electronica! Lil Uzi Vert! Boosie Badazz!—into a disorienting sonic collage that never feels stitched together. At times, he’s downright manic, like when he throws Slim Jxmmi on top of buzzsaw synthesizers, but jump forward just a few minutes and it’s all serene keyboards, spare drum programming, and old-guard New-York rapping. Dekmantel Podcast 308 is full of these kinds of change-ups, and it’s all the more thrilling for it.

As co-head of 140+, Washington DC’s gabberbitch69 is responsible for curating plenty of rabid, gut-busting, and blazingly fast dance music. It’s only fitting that her set for Boiler Room’s Hard Dance series works along the same lines. As her name implies, Hard Dance 081 is a straight shot of full-throttle gabber and the occasional playful wink. Storming kicks are the order of the hour here, and they go in all sorts of directions: take-no-prisoners industrial and hardcore, “Pump Up the Jam,” amp-busting peak-time rave cuts. It’s a dynamic and surprising set, packed with sideways blends and steamrolling beats. Her deftness behind the decks never gets lost in the din, but it also never distracts from the main point: this is music designed to hit like a bag of sledgehammers. On those grounds, Hard Dance 081 succeeds wildly.

On her mix for Crack, Zora Jones channels the anarchistic energy found in a long line of club-music deconstructors: Total Freedom’s uneasy futurism, Amnesia Scanner’s mecha-oligarchy, the GHE20G0TH1K crew’s bone-crunching intensity. She packs nearly forty tracks into an hour here, blending fast and rough but never messily. That would be impressive on a more straightforward mix, but it’s doubly so given the range Jones hits. There’s southern rap from upstarts and cult heroes followed by garbled techno and clouds of pointillistic synthesizers; there’s icy R&B and grime; sun-kissed pop melts into footwork and juke. Crack Mix 391 serves as a breakneck survey of hypermodern dance music, taking innumerable styles and blending them into a whirlwinding hour.

After fourteen years of focusing on film, Krust is back to releasing music. The drum-and-bass pioneer’s interest in storytelling shines through in his two most recent releases, namely The Edge of Everything—his comeback record—and his In Session mix for MixMag. This is hardcore at its most foreboding and dimly lit; every bass tone hits like a tectonic plate. It moves in curious ways, and often several simultaneously. The set’s omnipresent and abyssal low-end looms underneath while he whips drum kits into ever more frantic circles; the contrast is enough to bring on vertigo. Even when the earth starts to catch up, though, something’s always slightly off: a drum kit crunches a bit too messily, distressed vocal samples float past, synthesizers grow teeth and break in half. It’s a masterclass in wordless worldbuilding and cinematic sound design from one of the scene’s veterans.

As LABOUR, Farahnaz Hatam and Colin Hacklander mine a very specific pair of veins: Persian musical traditions and corrosive, avant-garde electronic music. Their mix for Fact is remarkable for its aesthetic commitment alone, juxtaposing pitch-black sheets of noise and screaming walls of synthesizers against lush folk music recordings in increasingly hypnotic ways. The pairing works: the darker tones, whether their own compositions, Sunn O)))’s black-hole metal, or the metallic scramble of Iannis Xenakis’s “La Legende d’Er,” collide in bewildering and beautiful ways with folk music that’s lush, opulent, and funereal. The resultant blur is charged with an otherworldly energy; it is an eerie and wholly engrossing fusion of seemingly disparate worlds.

Promises of dancefloor exaltation abound in dance-music mythology, but few deliver the sensation as often as Octo Octa and Eris Drew. Theirs is a deeply felt and relentlessly optimistic brand of dance music, with pumping house beats, skittering breaks, and soaring, heart-on-sleeve vocals. Their all-vinyl fabric presents entry, recorded in their New Hampshire cabin, only heightens their typical elation. The foundation, as usual, is made up of rollicking house and breakbeat, but they mix in a striking range of sounds. Nu-school bassline belters, a healthy dose of trance, bump-and-sizzle acid house, and plenty of old-school keyboards keep things fresh without distracting from the core groove. As the set progresses, it’s tough not to get swept up in its sheer joy. fabric presents shows Octo Octa and Eris Drew at the top of the world.

For her debut on Radio 1’s decks, Or:la shows off the style that she’s spent years refining: a chameleonic blend of breaks, electro, and dubstep filled with rug-pulling blends. The result is predictably head-spinning. Here, chugging tech rollers, storming breakbeats, and white-hot Baltimore club edits seem like natural bedfellows. The grooves move from a quiet simmer to a maelstrom which hardly lets up; even at their deepest and most settled, the roof is halfway gone. Thanks to sly selections, laser-sharp mixing, and plenty of genre acrobatics, Or:la’s Essential Mix is a wild-eyed rave-up that’s always moving a bit left of center.

Physical Therapy, née Daniel Fisher, doesn’t seem to slow down. New mixes pop up on his SoundCloud page like clockwork; Allergy Season, his label, has been delightfully busy this year. His two latest sets came out within two weeks of each other, but they couldn’t sound any less alike. The first, Big Softie UK Megamix!!, is all pumping UKG edits, with plenty of the turn-of-the-century R&B and pop numbers he’s so fond of. It’s playful and packed with killer blends, all stuttering drums and wobbling basslines and bubbly synthesizers. Low Tide, on the other hand, is slow-motion soul, downcast disco, and lush yacht rock. There’s a pensive beauty to many of his selections; it’s a quiet and reflective affair suited for sundowns. Taken as a pair, the sets cover a phenomenal range, work both on and off the dancefloor, and illustrate just how deep Fisher’s crates go.

Claire Rousay – The Ribbon on Your Throat

It’s a fitting title. The Ribbon on Your Throat is unnervingly intimate, all hushed voices and tones that tighten around the body only to dissolve at a moment’s notice. Rousay achieves this through closely miked field recordings, held in sharp contrast with queasy strings; both the facade and foundation are unstable, but the resultant sway houses its own wonder. Ribbon opens with what seems to be a series of interviews about the subjects’ emotional ties to music, and it closes with a swirling eddy of piano and strings. Somewhere in between, its core—flickering, churning, elusive—grows larger and more insistent, revealing a strange sort of beauty that demands to be deeply felt.

Nearly two years after blowing up on the back of a much-discussed Boiler Room set, Sherelle shows no signs of slowing down. Her trademark style, which blends rave-music classics with juke and footwork of all stripes, is on full display for her Essential Mix. Traxman’s “Chicago AQ Edit” blows the doors off, and then it’s one barnstormer after another for two hours straight: Yazzus’ nu-school rave-up edit of Nara’s “Daddy I Want a Pony,” INVT’s full-throttle junglist ode in “Apogee,” and plenty of ‘90s hardcore throwbacks in between. That’s just the first half hour, and the momentum only grows from there. Sherelle may be relatively new to the decks, but she mixes with a veteran’s touch and seemingly bottomless crates. Her selections come fast and hit hard, blended with a devil-may-care attitude that belies how seamlessly she does it. By the time the set wraps up, it sounds like she’s just getting started.

On her mix for Resident Advisor, Roza Terenzi—a force of nature behind the decks, no matter the style—blends decades of techno and trance firestarters into a peak-time screamer. Highlights abound: Voices of Kwahn’s voices-from-the-ether “Ya Yae Ya Yo Yo Yo,” an extended run of skittering almost-garage, the jacking space-tech of Terenzi’s own “Stylish Tantrum.” She moves between these styles with surgical precision, and the ever-present four-on-the-floor ties everything together even as the drums, synthesizers, and voices take on innumerable forms. Just as importantly, though, the whole thing’s shot through with a contagious joy; these grooves are just as futuristic as they are sun-blasted. For just under two hours, pretty much anywhere works as a dancefloor.