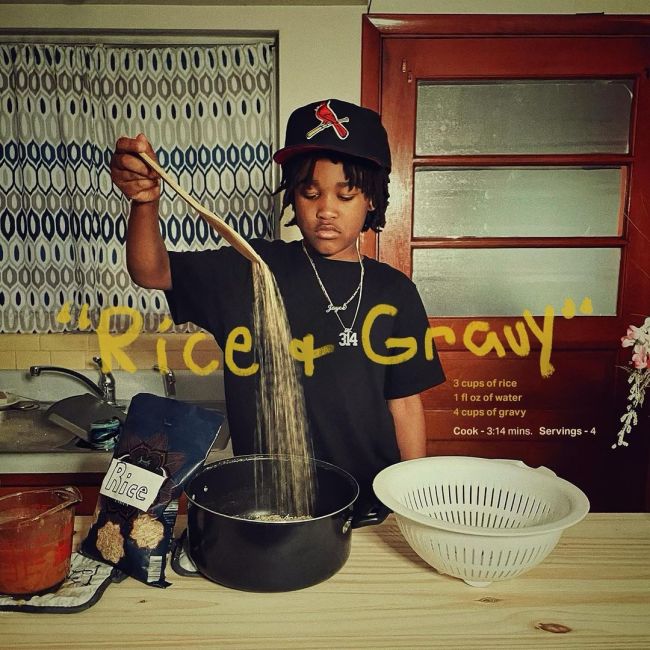 Support the last bastion of a free and fair music press by donating to our Patreon.

Josh Svetz grew up with mashed potatoes & gravy on his plate.

Smino’s career could have gone in a completely different direction. It’s not far-fetched to imagine a world where he’s plastered across trendy genre-less Spotify playlist covers and cashing in on the recent uptick of melding multi-faceted artists into creative enigmas, pigeonholing anyone who can’t be categorized into traditional genre as “genre-bending” or “anti-pop.”

This doesn’t mean he hasn’t benefited from the rise in popularity of this musical archetype – 4.5 million monthly Spotify listeners don’t come to just anybody without playing into some industry politics – but he seems to have kept his music uncompromised for the most part and represents the best version of the style.

The St. Louis-bred rapper’s skill set certainly fits the bill: A mix of contemporary R&B, Chicago art rap, and a southern rap influence. There’s inspiration courtesy of a healthy dose of Nelly, Lil Wayne, Andre 3000, Kanye West and Tye Tribbett. But instead of leaning into the marketing machine to make the most synthesized and palatable music designed for background listening and “vibes,” he’s decided to embrace his inner Andre and become an inspired weirdo – the answer towhat if Chance The Rapper continued to experiment and push his oddball nature rather than browbeating his listeners for living like heathens.

Even when done right, the anti-pop style can sound plastic. I like Rex Orange County and Dominic Fike, but sometimes they make music for vintage t-shirt shopping at Urban Outfitters or background jingles fit for Subaru commercials that people try to Shazam during the ad break before Dave comes on. Smino’s music doesn’t feel calculated; it sounds like he went for a walk, heard a song during his travels and became inspired to put his own spin on it when he got back to the recording studio. His vocal range shifts between shrieking falsetto, soothing harmony, and stop and stark staccato, all in seconds. Both his albums, blkswn and NØIR, showcase his knack for genre-hopping, but it was his mixtape in 2020 She Already Decided, where he flaunts his versatility by jumping on the beats of some of the biggest rap songs at the time and making them his own.

He freestyles about white people saying the n-word at rap shows to the tune of Roddy Ricch’s “The Box” and transforms Baby Keem’s “Orange Soda” into a funny but dead serious critique of people who don’t get high on their own supply. It harkens back to Dedication/No Ceilings era Lil Wayne and DatPiff era Wiz Khalifa, remixing the popular landscape to their singular visions: Wayne spitting inventive freestyles that regularly outdid the original track and Wiz morphing the topic of any song to be about weed. The tape reminds me of downloading shady seeded audio files on Bearshare and Frostwire when labels couldn’t come after everyone, and didn’t have a stranglehold on the internet’s music supply; a time when artists could use the supposed rules of fair use to their advantage, not worried about if they’d get enough Spotify streams to hit Billboard.

She Already Decided isn’t available on streaming, nor can you find the original Soundcloud version (but here’s a re-upload with 15 of the original 16 tracks). He probably didn’t make much money off it either. But in lieu of monetary advancement, the tape proved one crucial sentiment about Smino – money and clout don’t dictate his moves.

He hasn’t lost himself despite going from being a Columbia College dropout living in a recording booth at the Music Factory studio in Chicago to becoming one of Dreamville’s go-to features, along with plenty of critical acclaim and cult following for his solo work. His move to Chicago also sparked a new way of thinking, telling GOAT about learning the importance of building a team and trusting the people who see your vision rather than trying to do everything yourself like he was in St. Louis.

Loyalty and artistic kinship are important to Smino. He told Complex about his philosophy for providing features and joint collaborations, opting to only work with people who share his sensibilities, rather than who can offer the biggest check. In an age where artists slap together 20 track albums for streaming manipulation and pump out deluxe albums days after the original drops in a race to chart higher on Billboard, Smino’s resistance of succumbing to the machine is appreciated. He may not be the only musical auteur—and he has plenty of business pursuits—but the desire to make art just because he thinks it’s fun and cool is refreshing. Maybe I’m being naïve, but Smino still comes off as the guy who told this very site: “Not no fame shit, none of that.”

But sometimes, when you don’t fall in line with the industry, it attempts to disrupt your progress. Smino has admitted in the past he’s struggled to put out music, though not going into specifics over why. Whatever the case may be, he calls his latest single “Rice & Gravy” a “new journey” in a tweet teasing the song’s release. The song explores Smino’s formative years, documenting his strong roots in the North County soil. With support from his longtime producer Monte Booker, Smino weaves tales of getting kicked off cordless phones, receiving game from his four older sisters and always being blamed by his mom whenever trouble happened at home.

dawg I went thru so much bullsht tryna release music over da past couple years I’m jus happy af to begin my new journey tonite… I feel like a brand new artist rn.. 🏆

Booker crafts instrumentals of controlled chaos that retain a sense of warmth, like a dysfunctional family who always have each others’ backs despite their unhinged nature. It serves as a fitting backdrop for Smino, hoarsely crooning as if his voice is about to give out, only to switch it up with brisk flow like he’s a kid trying to finish telling his friend a story before his mom needs the landline.

The lessons passed down to Smino reinforce self-confidence, whether he raps about staying unfazed in the presence of people’s negative auras or swerving a woman trying to play him. His family filled his upbringing with affirmations of having high self-worth, led by his single mother—who he calls a superhero—setting an example of tireless work ethic and overcoming the odds.

The song feels like it could be a precursor for him to take the next step as an artist. Because to move forward and change the course of your career requires meditation over your origins. Paired with the producer who helped “make him,” Smino goes back to the past to hopefully plot out a more satisfying future on his terms.

Wale Takes Full Advantage Of His Name Trending On Twitter