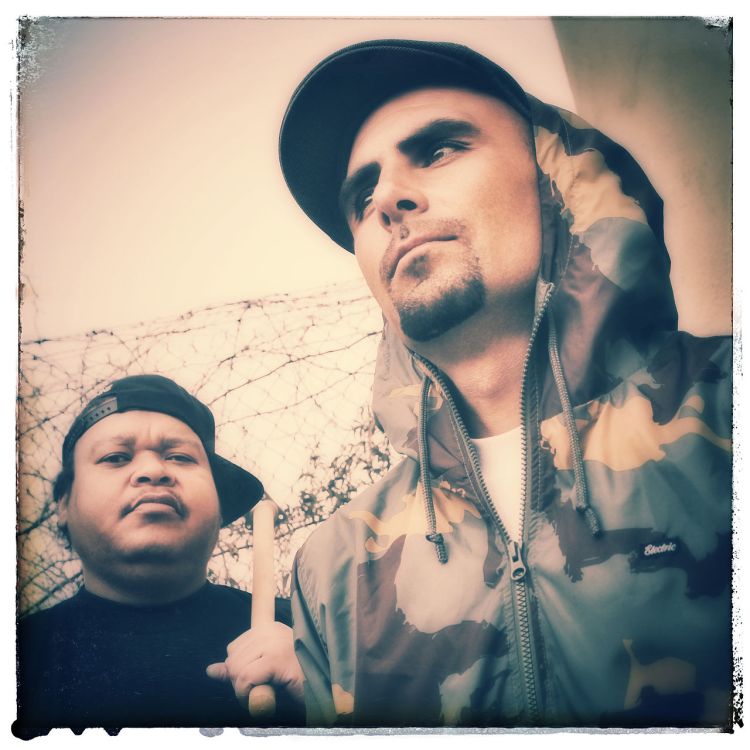 Written by Jeff Weiss. Originally published in January 2009 at a local alt-weekly now owned by crypto-fascists.

Other than the all-you-can-eat avoirdupois of the Fat Boys, it’s difficult to imagine a rap group with a more appropriate name than People Under the Stairs. After all, while local peers Dilated Peoples, Jurassic 5 and Ugly Duckling inked major-label deals to capitalize on the ephemeral underground rap rush of the late ’90s/early ’00s, the duo of Thes One and Double K spent the majority of their 10-year career so subterranean that only the most dedicated heads were aware of their existence.

“We do well in L.A. now, but it has been a slow, slow build,” the Peruvian-born, L.A.-raised Thes One says. “We realized early on that to survive, we needed to be on the road. We’d been around the world 10 times and done Glastonbury, Reading and Leeds before people had even thought about leaving L.A. And we’ve never been heralded by any local media.”

Few things are more trite than underground rappers bemoaning perceived slights, but Thes One has a point. Just recently, I wrote a piece listing the most notable local rappers of the past 15 years, and egregiously overlooked People Under the Stairs. My bad. But that’s been the general rule, despite a discography that ranks as the deepest and most consistent of any of their indie-boom brethren. Indeed, save for the occasional offhand pejorative uttered by haters condescendingly labeling them “backpackers” or “boom-bap revivalists,” the critical cognoscenti have mostly ignored People Under the Stairs.

“We knew from the first time we went to Europe that we’d eventually catch on here,” Thes’ partner, Double K, says sanguinely. “Urb put us in their Next 100 once, but that was it. It didn’t help our stature that we were selective in who we associated with. We didn’t just jump on every show bill; we wanted to keep our brand a mystery.”

Opacity has been a chief characteristic of the pair since they first hooked up in the mid-’90s at now-shuttered Martin’s Records on Pico. It’s there that Thes, an up-and-coming producer at Loyola High, bumped into K, who’d already earned modest local renown for his beats and work in Log Cabin, a loose collective that featured several future Living Legends, including fellow Hamilton High classmate Murs. There was tension between the future People, though, because mutual friends had stoked animosity.

“We were either going to fight or sort it out peacefully,” Thes One waxes nostalgically. “K had a cassette on him and we opted to go beat for beat. We connected immediately; we were two guys who cared about music, surrounded by a million dudes with backpacks who wrote rhymes. No one else around us was listening to Freestyle Fellowship, Led Zeppelin and the Beatnuts.”

Opting to join forces (and thus keep their beats for themselves), the pair left their other groups and became People Under the Stairs, after the 1991 Wes Craven horror flick and a shared penchant for secrecy. Keeping their plans discreet, the newly formed duo rode through the glory years of L.A. independent hip-hop, with the Project Blowed scene and fabled Unity shows providing a fertile womb for the next generation.

Finally emerging with the self-released The Next Step in 1998, an auspicious, left-field gem studded with esoteric psych, soul and jazz samples and B-boy boasts, P.U.T.S. were met with a lukewarm local reception. While their peers drew major-label suitors, they were forced to beg Fat Beats to sell their debut on consignment. According to Thes, part of this stemmed from their more eclectic aesthetic, a hodgepodge of the jazzy flirtations of Tribe Called Quest, the goofy, laid-back attitude of the Pharcyde and the stoner insouciance of the Beatnuts. By contrast, Dilated enlisted producers like DJ Premier and Alchemist to create an ominous mid-’90s New York sound, while Jurassic 5 mined the old-style harmonies of the Cold Crush Brothers and Furious 5.

“People Under the Stairs never had the right promotion,” suggests Mark Luv, the longtime L.A. radio personality/DJ legend and one of the group’s first supporters. “Take a group like Dilated. They had a lucrative deal to have albums released on both Capitol and ABB, so they got double promo. It didn’t help that Thes and K wouldn’t come into a Fat Beats and hang out all day. Plus, Dilated had Babu, J5 had Cut Chemist and Nu-Mark; DJs run record stores and look out for their own.”

Settled into the role of the quiet cult favorite, P.U.T.S. churned out a pair of subterranean classics in 2000’s Question in the Form of an Answer and 2002’s O.S.T. (Original Soundtrack) — two records that set them apart from their friendly rivals but also shared a thorough, atavistic reverence for hip-hop history and culture. While such academia often breeds orthodoxy, Thes and Double K stayed proudly irreverent, lambasting narrow-minded academics trying to oversimplify hip-hop into the four basic elements — as well as the “superlyrical” MC types so pervasive in the underground.

Despite the weak embrace they initially received, few native artists have so diligently paid homage to their hometown. The team drops at least one L.A. track on each record, name-drops everything from Crescent Heights to San Pedro, the 310 area code, late UNITY mastermind Bigga B, Tommy’s Burgers and El Cholo. The local love culminated with September’s Gold Dust–released Fun DMC, where the group rigged mics in a friend’s backyard at 42nd and Vermont to capture the sundry sounds of the city.

“To us, L.A. is the BBQs, the dominos, the stories. The BBQ is this city’s campfire, the place where everyone comes together to catch up,” Thes One says.

Still unsung a decade into their deep careers, the group have finally managed to accumulate a respectable and fiercely loyal local fan base, which recently proved its allegiance by besieging Amoeba Records with calls when the store initially refused to let P.U.T.S do an in-store. Perhaps equally meaningful to the group have been co-signs from the likes of Chuck D, DJ Jazzy Jeff and Biz Markie, the latter of whom surprised Thes with a phone call on April Fool’s Day to tell him how much he enjoyed the group.

With solo albums on the docket and no plans to give up anytime soon, People Under the Stairs’ main goal remains unchanged since their humble beginnings.

“We’re still working hard to break through the glass ceiling,” Thes One says. “One of these days, maybe you’ll see us on MTV or the radio, but if we do, it won’t be because we’ve changed who we are. At the end of the day, it’s about being original and making good music. It’s been a crazy trip.”

IDK Releases “Is He Real?” Album

Joey Bada$$ Slams Long Albums: ‘Nobody Wants To Fucking Listen To That’