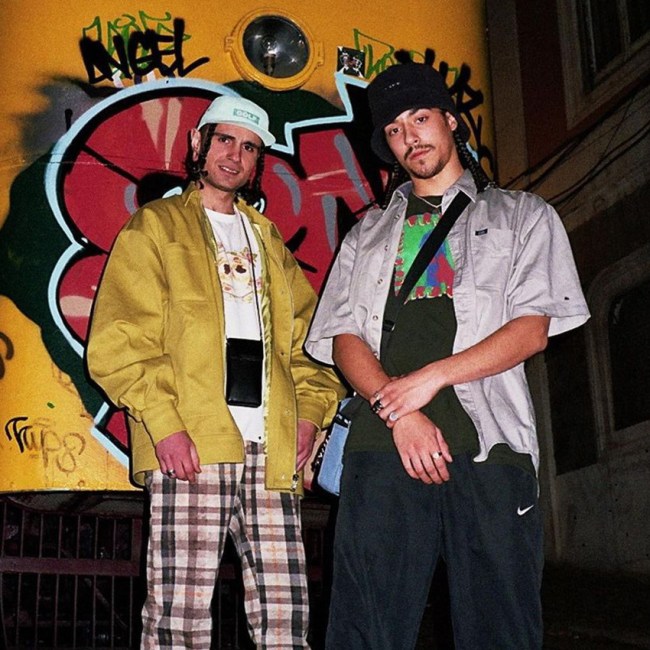 Please support the last-standing paywall and ad-free website out there giving you quality music journalism by subscribing to the Passion of the Weiss Patreon.

Pranav Trewn wants you to know of the impact of the Kid Cudi hum.

“Soul music is what you feel, right?” That hypothesis is posed at the top of Who Sold My Soul?, the recent joint album between Brighton rapper dereck d.a.c. and producer KIANVSLIFE. The minute-long intro works simultaneously as a literal definition of soul, as well as a demonstration of it in practice, chopping a particularly vibrant horn loop and overlaying it with a thesis on both the namesake genre and the related musical quality that enlivens all others.

For the young twenty-somethings who met at university, the question of soul was not simply semantics, but a matter of survival – of understanding how the world actively tries to rob you of your own, and learning how best to resist. If soul is the feeling, then how do you find it?

Spending 60 hours a week washing dishes after being burned in the music industry by former friends, Dereck’s spirit was not yet crushed, but being ground down by what seemed to be a looming realization of an unavoidable “reality”. His one respite during gruelling shifts at the restaurant was taking midday breaks at Kian’s place nearby, where he’d unload those anxieties while reminiscing about making their last tape, a refreshingly brisk collection of sparkling art-rap they dubbed Um.. Random Shit. Despite beginning as an informal school project, in retrospect the collaboration came to feel more and more like a mission statement. So they schemed to escape and recreate the magic, getting the cheapest AirBnB they could find outside the country and knocking out an album within their short overlapping span of time off.

The pair wound up in Lisbon, converting cramped quarters in a section of the city often ignored by tourists, into a makeshift home studio. Between evenings buzzing off dollar pint beers and afternoons out sightseeing, they recorded nine tracks plus some accompanying skits that serve as an album-length inquiry into what contemporary adulthood has gotten all wrong. Their process involved Kian staying up all night to pitch shift old soul records into bluesy grooves, with Dereck taking over in the morning to drop free-associative rhymes over the loops. In the period of the day where they’d be both awake, the two dug through record store crates for raw material, drew up the album’s beautiful accompanying art and vinyl packaging, and pushed one another to try new ideas beyond what either had previously explored.

What began as a retreat culminated in the strongest and most focused work of both their careers so far. The result is reminiscent of the lo-fi splendorous haze of The Alchemist’s recent tapes, or the homespun and softly celebratory work of Navy Blue, MAVI, and Ovrkast. The album sits within the lineage that runs from Marcberg to Some Rap Songs, but is grounded by its own regional identity. “I grew up on the boom-bap sound, and I mainly listen to music from the US,” Dereck told me over Zoom, with Kian nodding in agreement in the adjacent panel. “But I’m not from the US, so inherently I can’t do the same thing. So I’m making my own take on what I’m listening to, just trying to do that in our own way.”

Dereck’s unique style, a combo of neat elocution with a hazy but electric sense of rhythm – something that strikes me as Riz Ahmed by way of Pink Siifu – comes from nearly a decade living within the freestyle world. He first learned how to rap over Xbox Live during binge sessions of Call of Duty while his mom was away at work. He casually amassed hours of practice a day rhyming into his headset over J Dilla mixes, invoking awe rather than ire from his fellow players, once including a Twitch streamer who accidentally broadcast Dereck’s voice to some 10,000 viewers. Dereck was dumbstruck: “I didn’t realize I was rapping to loads of people, and I started getting messages being like, ‘Yo you’re cold, do you have music?’” Those affirmations gave Dereck his first sense that his voice might have the potential to reach an audience outside of his living room.

The experience translated into what Dereck calls a period of “cringy, 17-year-old rap shit” that he has since taken down from SoundCloud. Still, his talents caught the attention of some older peers, who adopted him within the local freestyle scene. “Suddenly it’s like, shit I’m not just in my room, I’m amongst other people who are doper than me,” Dereck recalled, his worldview opening wider as a result. “I was just rapping in the streets, like anywhere someone is freestyling I was coming in, learning by doing.” There were no aspirations for a career or fame, simply a community seeking a channel to express themselves. As he noted, “I’ve heard people rap about shit they wouldn’t even tell you, except for in a freestyle.”

Participating in those circles developed Dereck’s knack for sharp, concise storytelling, and furthered his confidence for telling those stories through songwriting. Yet when Dereck and Kian first linked up, the latter was pursuing tracks more in line with the analog era of 70s’ rock, coming in with something of an indifferent attitude towards hip-hop. Being exposed to Dereck’s love for sample heroes like De La Soul and Madlib stretched his perspective of what rap was, giving the producer an appreciation for how the genre twisted old songs into blank canvases. But rather than replicate those influences, he blended them with his former interests. The result is that Kian is as conversational about the production of Jay Versace as he is that of Quincy Jones, reflected in the dusty warmth of both his rap productions with Dereck and his more genre-bending solo work.

For Who Sold My Soul?, Kian limited his palette to the ‘69-’72 period of American soul music, what he refers to as “the genre’s era of pain.” “Soul music was crying out back then. That music was for emancipation; it wasn’t for boogie, it wasn’t for dancing,” he explained. His goal was to isolate those moments in the music that ventured towards something darker and flip them for
Dereck to tell a new story of redemption. Like those records they used as source material, the album’s focus is on breaking free, reclaiming a sense of control over the artists’ own fates.

Dereck’s verses throughout the album tell an origin story, of the rapper losing his way, rediscovering his spark, and setting his sights against those outside forces that led him astray. On “Happy”, he narrows in on the stigma society has come to associate with being “unproductive”, a generational sense of shame that serves only to push people away from their passions. He casts those outside voices aside on “Ghetto AirBnB”, no longer letting them judge the speed of his journey or the worth of his intentions. As he comes to demand on “dereckVSLIFE, a righteous blitz with a charming new visual we’re sharing below: “Forget my plea, I ain’t beggin no more/ Rest assured…I’m past trying to count my woes/ I’m past trying to sit back and still self-loath.”

As with much of their generation, Dereck and Kian recognize that big statements don’t need lengthy packaging. At a streamlined 25 minutes, Who Sold Your Soul? is the type of album that lets its ideas sink in through repeat listening. “Who Sold You?” is made up of a string of readymade mantras (“I don’t need to flex, I just need to rest”), and the unhurried pace of “Moon Shoes” and “Gat” feel like moments of earned self-assurance. The leftover samples that didn’t turn into proper songs were repurposed to further set the scene, with Dereck overlaying relevant found sound from the farthest reaches of the Internet. “That intro skit is some random guy sitting in his car talking about soul music with 20 views on YouTube,” Dereck laughed. “Like homie recorded himself in 2007 in a Taco Bell parking lot, and now he’s on vinyl.”

What stands out about the LP beyond the sticky hooks and thematic grandeur interwoven in slice of life lyricism, is how it portrays the joy of creation in its ease and animated delivery that bleeds through every note and syllable. You can practically see Dereck smile as his voice stretches to fill the pockets within Kian’s stitching, riffing through an unpredictable assortment of words and melodies like he’s solving crossword puzzles. Those moments were captured in real time for a soon-to-be-released behind-the-scenes documentary filmed by their friend HXRLXY, something Dereck knew he wanted to create the moment they conceived of the album.

“We put artists on pedestals so much, but in my experience they’re just normal people,” he said. Or at least the normal people, “who have the balls to do what they want to do.” Taking inspiration from studio footage of the making of early Tribe Called Quest albums, Dereck saw preserving the process as a means in which to “keep the culture alive,” demonstrating for others how to direct the lighting towards the bottle, and do so on their own terms.

That approach is starting to garner the two the kind of groundswell support that often finally catches the ears of the establishment. Still, making the album together has only affirmed that they don’t need the machine to move forward. In fact, Dereck described the hustle as intrinsic to their art: “I’ve become something of a jack of all trades. I’m a photographer, a videographer, I’m good with Photoshop because I have to do the artwork myself. I create all the Instagram posts, so I’m my own social media marketing department. As an independent artist, I’m the whole label.”

They see DIY as not a means to an end, but the motivation to keep moving – the best means of preserving the purity of their goals. The joy of assembling Who Sold My Soul? proved so infectious that Dereck and Kian plan to replicate the formula again later this summer. This time around, they’re envisioning a trip to either Japan or New York, likely wherever is cheaper or even allows international visitors within the next few months. “When you get this momentum, you ride the wave. Especially now, we’re not stoppin’,” Dereck said. “We want to continue to amplify and refine this raw idea: Get away somewhere, make some music based on our surroundings, and document the process.”

Drake Now Has The Most Billboard Awards Ever

Mike Tyson & Wack 100 Have Trolled Us All