Quavo and Saweetie have been dating for roughly two years and judging by their recent GQ interview, that’s just the beginning. The pair became a trending Twitter topic on Thursday (July 16) soon after the story was published as people finally got a sneak peek into their relationship.

As Saweetie explained during the conversation, she’d already had a crush on the Migos rapper, but Instagram played an integral role in getting them together.

“He’s always been fine to me,” she said. “In a group chat [with friends], I would screenshot his picture and be like, ‘Damn, this nigga is fine.’”

After exchanging a couple of carefully selected emojis, Quavo mustered up the courage to ask her out and invited her to a backyard get-together, which she said “looked like [the video to Tupac’s] ‘I Get Around.’”

Anyone familiar with the video will recall lots of scantily-clad women fawning over the late Hip Hop legend. Needless to say, it wasn’t exactly a prime spot for two people to get to know each other.

“That wasn’t my environment,” he said and then admitted she “ghosted” him because of it, although she insisted she was simply “trying to play hard to get.”

In an effort to make it up to her, Quavo then proposed a real first date that ended up like an episode of Donald Glover’s popular FX series Atlanta.

After convincing her to come to Atlanta, Quavo wined and dined her at his favorite steak house Stoney River, where he nearly choked to death on a crab cake. Escaping with his life, he then took her to Quality Control Music headquarters for a tour of the studio before ending up at the legendary strip club Magic City. As $100 bills were flying, a fight broke out and they lost each other in the melee (sort of). 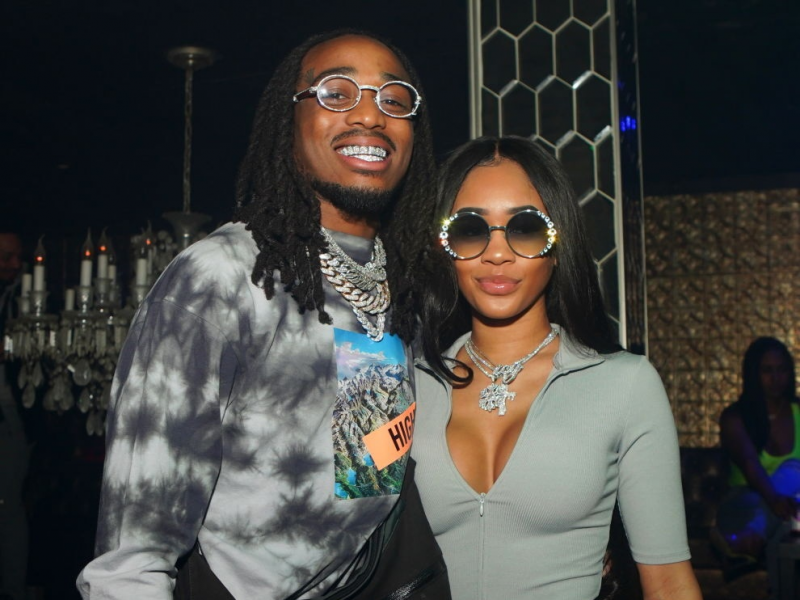 “I didn’t know if it was on some gang shit, so it was like, ‘Let’s get to the car!’ ” he recalled. “All this time, I forget I’m having a date! She catches up and cussed me out in front of Magic City.” He then revealed the night ended on an intimate high note much to Saweetie’s embarrassment.

“Whaaaaat! Brooooooo! Whaaaaat! I could fight you right now,” she said, to which Quavo replied, “And we ain’t look back since.”

Twitter has exploded with reactions to the story. Check some of them out below.

Quavo and saweetie 🤍😩 Im not into celebrity relationships but Awh man he looks great. And so does she. pic.twitter.com/n1huIpgBdS

I want that Quavo and Saweetie love pic.twitter.com/bMo48rJzxX

Aww this was so sweet 😩

Slide in her DMs fellas Quavo and Saweetie a living example‼️ pic.twitter.com/yD8CmLZth4

QUAVO AND SAWEETIE I LOVE YOU GUYS pic.twitter.com/mYJr5PbUse

I must admit Quavo and Saweetie are so cute. I just like seeing a black man making a black woman happy.

the way Quavo and Saweetie spoke about each other in this GQ story has me in my bag this morning😭😭😭 pic.twitter.com/PSyOrkPIVi

Seeing all these cute quavo and saweetie videos and pics pic.twitter.com/oFc0W5UiU9

Jada And Will? Nahhh let me find that Quavo and Saweetie love 🥴😅😂 https://t.co/lSIsA6TmnI

Yung Bans Reflects On Akademiks ‘Beef’ Over ‘MISUNDERSTOOD’ Sales: ‘He’s A Nobody’