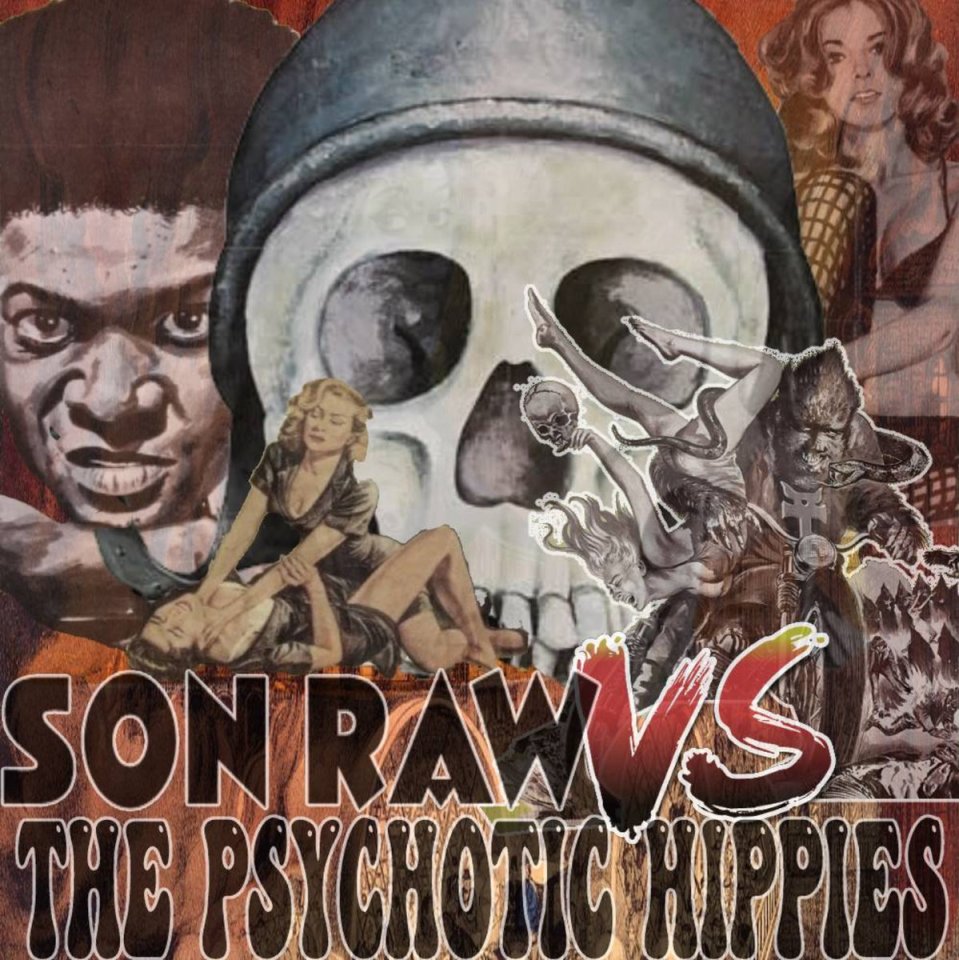 This period of quarantine may be coming to a close, but that doesn’t change the fact that our writers will still be typing thousands of words, isolated in dimly lit rooms just to give you the real. Please support our journey by subscribing to Passion of the Weiss on Patreon.

For some, the late 60s/early 70s are imagined to be an idyllic romp through gentler times, complete with long-hairs, all the weed you could inhale and free love as far as the red-rimmed eye could see. And while that vision is not altogether wrong, it’s certainly not a complete one, either. Just ask attendees of the Altamont Rock Festival or anyone even remotely affiliated with the Manson family. Son Raw taps into this latter vein on his latest beat masterpiece, Son Raw Vs. The Psychotic Hippies. Utilizing contemporary news clips, TV and movie dialogue and an arguably unhealthy dose of straight acid rock, no chaser, SR takes a stroll down the darker side of Haight-Ashbury.

That Son Raw is the producer of this endeavor might perplex some. Considered by most to be a master of all things hip-hop, grime, dancehall and beat related, a turn towards rock from decades ago might seem odd. Instead, he posed the following question to himself: “what if a beatmaker/critic who routinely mocks the past 40 years of rock music made a rock album?” With his trusty SP-404 sampler sequencer in tow, Raw keeps to his namesake, taking listeners on “an acid fueled romp through the hairiest, gnarliest, headbanging-est proto-metal obscurities of the early 70s. Muscular drums collide with roaring guitars… to create a psychedelic love letter to Rock’s anti-social side and exploitation cinema’s cheapest thrills. I wrote the album from the perspective of an imaginary band–one filled with big, thuggish-looking goons who’d break a pool cue over your head while downing a pitcher of Molson Ex.”

Educated listeners will note hidden gems throughout the affair, including clips from Cheech & Chong (tail end of “Head!”/beginning of “Black Power Leader in Communist China”) or a recurring Wu-Tang sample of U-God growling “Raw” from “Da Mystery of Chess Boxing” (“An Infestation of Hippies,” “Lycanthropic Heshers,” “Gate 17”). And unless you were there, there’s plenty to learn here, too. I, for one, though an avid connoisseur of shrubbery for the past few decades, was unaware that potheads were at one time known as “grasshoppers” (“Eddie Rodriguez Goes Uptown”). Thanks, Professor Raw!

If you’re into screeching guitars, burbling bass lines and flamboyant drums, there’s very little not to enjoy here. From “Angel Dusted” and it’s “Warlord Leather”/Adult Swim vibe to the freakout fun of “Iron Curtains for Steel Vaginas,” Raw seldom takes his foot off the gas over the course of the 13 tracks here. Following one of the stoniest trips you’ve taken in a locked down minute, SR concludes the album on a Spaghetti Western note. Closers “The Yakuza Massacre” and “For a Few Bitcoins More” would not sound out of place alongside anything coming from Ennio Morricone’s camp during the Sergio Leone/”Man with No Name” days. The end result might end up giving you flashbacks down the road, but I guarantee you the trip is worth the ride. Now go get a haircut, you damn, dirty hippie.