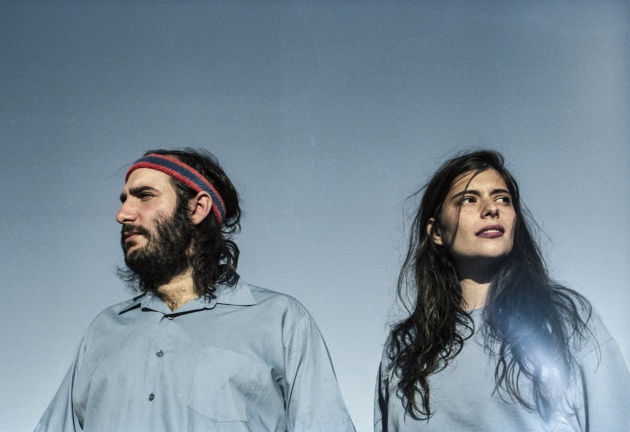 Will Schube lives in a digital chamber.

I told y’all lounge pop was back. We’re making this goddamn movement into a national pastime while the “critics” and “pundits” are busy scratching out each others’ eyes about the new Drake album. That shit doesn’t matter! LA by way of Florida French-American psych-lounge-pop duo Pearl & the Oysters is what matters, baby! The group―which consists of Juliette Pearl Davis and Joachim Polack―and their new LP, Flowerland, just came out via Feeltrip Records and is chock full o’ groovy, sardonic jams that are brimming with ironic distance cut by enough sincerity to make the record float towards paradise.

There has been some precedent for this new generation of disco adjacent stars: Glass Candy, Nite Jewel, etc.; but there’s something new and wholesome about the quixotic compositions of the duo. It’s almost like listening to Tiny Tim while the world burns, or making a sandwich during an earthquake. The lyrics do, for what it’s worth, engage with the traumas and delusions of our day, but the music carries the emotional weight of these songs.

This is blissful music in a uniquely non-blissful time, but balms exist for a reason, and this record is an absolute balm. “Treasure Island” replaces Tim Curry-era Muppet Treasure Island with a reformed siren, while “Crocodile” is buoyed by a raggedy drum machine and a bassline that walks the mf’ing dog around the block. The lyrics move from idealistic to disgusted, as if Davis and Polack wrote these songs while hiking in secluded mountains, occasionally interrupted by a couple noisily taking selfies then complaining about the WiFi needed and not had to put the pic on IG.

Another tip for any aspiring Noise Pollutioners…Include “motorik” in your description of your music and I’ll probably fall in love if you’re not a stupid liar. Motorists play with post-punk, a little bit of krautrock, bratty 90s alternative stuff, and the occasional guitar line that reminds me of Preoccupations.

The group is based out of Toronto, which has been the most exciting North American rock scene for some time, by the way, and I discovered them through the always excellent Bobo Integral Records, who put out jangly pop punk from bands across the world. The Toronto-bred trio deal mostly with the existential questions that plague us all, like how to live an honest, good life in modernity, how to get our heads to shut up occasionally, and things seeming to end before they even begin.

I guess we’re going full on Canadian this week because batting third for the Noise Pollution squad this week is d’Eon, who put out his latest LP, Rhododendron, back on August 13. The project was released via the excellent experimental Chicago label Hausu Mountain, and while some of their stuff is a littleeeee bit too weird and scary for me, this d’Eon project hits the absolute sweet spot.

Though I am a regretful novice when it comes to d’Eon’s music, plenty of cooler, hipper people have been digging his songs for quite some time. Back in the early 2010s, the excellent and defunct LA-based label Hippos In Tanks released six of d’Eon’s albums, including a bunch from his ongoing Music For Keyboards series, and his split LP with Grimes called Darkbloom in 2011.

This new project, Rhododendron, mostly relies on plucked string instruments and clearly synthetic woodwinds. It’s one of the most original projects I’ve heard this year, with songs like “Cobra” beginning like novice synthesizer exercises before launching into undeniably hypnotic melodic exercises. The label calls this digital chamber music, and I’m hard pressed to find a better descriptor. If they’re so brilliant maybe they should write this column. Sheesh.