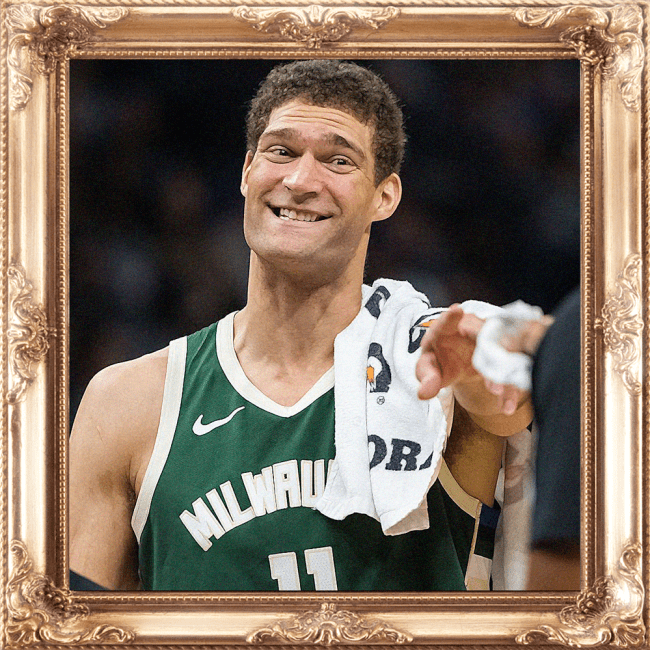 Abe Beame is trying to purchase a proper bot to get those Billie Eilish Jordan’s.

There’s an old maxim concerning Brad Pitt that inevitably comes up when we discuss his career in its totality. They’ll say, “He’s a character actor in a leading man’s body”. It’s been said so many times that at this point, we no longer even think about what that really means, but for fun, let’s do it now. Even in the lead, Pitt is at his best as a complimentary player. He’s not a personality that demands attention, even though he can command a screen, and our eyes are inevitably drawn to him when he’s on one. But his best utilizations are typically slightly off kilter, bizarre, funny or dickish figures who you’d have a hard time building an entire film around.

The NBA is full of leading men and character actors. We spend most of our time and energy focused on the former. The gravitational talents who suck all the air out of the courts they play on. As well we should. History has shown us definitively, to win a championship, you need an elite leading man. With very few exceptions, this means most of the teams with rings in league history have a top 10 player on it.

There was a time, in the 2010s, when Milwaukee Bucks center Brook Lopez was a mid-tier leading man. A Miles Teller level talent. He was drafted towards the back of the lottery in 2008 by the New Jersey Nets, and spent the first few years of his career toiling in my beloved Continental Airlines Arena in East Rutherford. The player the Nets drafted out of Stanford was worthy of his lofty spot. Lopez is a mountain. He looks every bit the conventional NBA center. He’s seven feet tall and nearly three hundred pounds. But what separates him is an uncommon lightness, both of foot and touch. He was a traditional post up nightmare, rooting himself 8-15 feet out and unleashing a broad vocabulary of steps to unsettle his defender, followed by creative and devastatingly effective shots he could unleash at Kareemian angles.

In another era, Lopez would’ve been a number one pick, chosen by a team with visions of an evolved, beefy Olajuwon wreaking havoc on the league. How uncommon is Lopez’s talent? He has an identical twin brother, Robin. They are the same height and weight. And yet one is an arms and elbows inarticulate roll man (whose style I prefer, for the record). The other was a wizard around the nail who could clean up the glass as well as his brother, but lashing him to a stanchion on offense in the same manner would be a waste of his innate gifts.

And so, for nine entire seasons, Brook languished, first in New Jersey, then in Brooklyn, often serving as the sole reason the Nets didn’t go 0-82 as the rudderless franchise existed to harvest lottery draft picks for the Celtics. He’s the Nets all-time franchise leader in seasons played, points and blocks. He even made an All Star team. But in his final season with the Nets, Kenny Atkinson, the coach who saved the cursed franchise, told Brook to focus on extending his range by about six feet, and as a result, may have extended his career an additional decade.

Lopez was a casualty of the Nets rebuild, shipped to the Lakers with Kyle Kuzma for reclamation project D Lo and, uh, Timofey Mozgov. Lopez played 74 games for the Lakers in the 2017-2018 season but for the first time, his scoring dipped below 20, to 13. The Lakers let him walk after one season to take a flier on Michael Beasley.

Had the Lakers been paying attention, they’d have noticed that while Lopez only averaged 13 ppg, his most important stat was three point attempts. After spending his entire career on the Nets averaging zero, his final season in Brooklyn his attempts shot up to five, good for a 34% average. He brought it with him to the Lakers, but they seemed more concerned with his counting stats, and Milwaukee ended up with him for a song.

For most of Brook’s time on the Nets, I recall him as a kind of dour, joyless, boring, stoic team leader. This may have something to do with his team always either being bad and/or disappointing. It may have something to do with the traditional, numbing style of old school five he played. He was an iron jawed lug, heaping on empty calorie stats for a shitty team. Much like the Lakers, I was ready for his career to end.

But then he got to Milwaukee, where he was indoctrinated into Coach Bud’s vicious regular season pace and space win machine. Here’s some footage from his first game on the Bucks in 2018, a win in Charlotte:

From the moment the Warriors won a championship with Draymond Green at the 5, the league began searching for a “real” version of what he accomplished at center: a player who could provide size, rim protection, and defense while stretching the floor on offense. There’s been glimpses, oversized sweet shooting wings who can perform for stretches at center, centers who can sit in a corner as a distraction and even hit occasionally to the tune of 30% given the look, but no one had really threaded the needle until Brook arrived in Wisconsin.

Giannis gets the headlines, Khris takes the big shots, and Jrue sets the table, but without Brook the five out system wouldn’t work. Brook stirs the drink, and this goes for defense as well. Once again, Giannis is the attraction, but much like Jordan to Pippen, one wins the accolades while the other does the hard work. In Coach Bud’s system, you need elite rim protection and quick twitch help defense to dissuade the opponent’s offense from coming inside for otherwise high percentage shots. Brook is the physical manifestation of that dissuasion. Here’s Brook pinning a Durant shot at the end of Game 7:

But it isn’t just his play, with his teammates hoarding the lion’s share of the attention, Lopez has become the veteran locker room presence who ensures the Bucks never take their lot too seriously. The zenith of this was a reunion season with his brother Robin in 2019-2020, when the Lopezes would play WWE heels, taking turns getting their asses kicked as a pre game ritual. On the court, he’s an enforcer. He plays with a snarl that was missing from much of his career. It’s an energy and attitude that has been essential to his team’s rise.

The journey from star to role player is rocky for some. Who can forget a bloated Allen Iverson pouting in Detroit, or a bloated Chris Webber pouting in Detroit, or a hobbled Blake Griffin pouting, in Detroit? But for Brook it almost seems to have come as a relief. And now, for his selflessness, he’s been rewarded for all those 30 win seasons as a Net with a ring, and what looks like several more seasons as the Bucks glue guy.

Historically, at the end of every season, the champs go to Disney World. Brook and Robin, two giant children, are Disney fanatics and openly appeal to Bob Iger in interviews for post career jobs in the parks, so as I write this finale, chances are they are there. But even if they’re not, Brook appears to have finally found the happiest place on Earth.

Desiigner Falls Off Stage Onto James Harden While Performing ‘Panda’