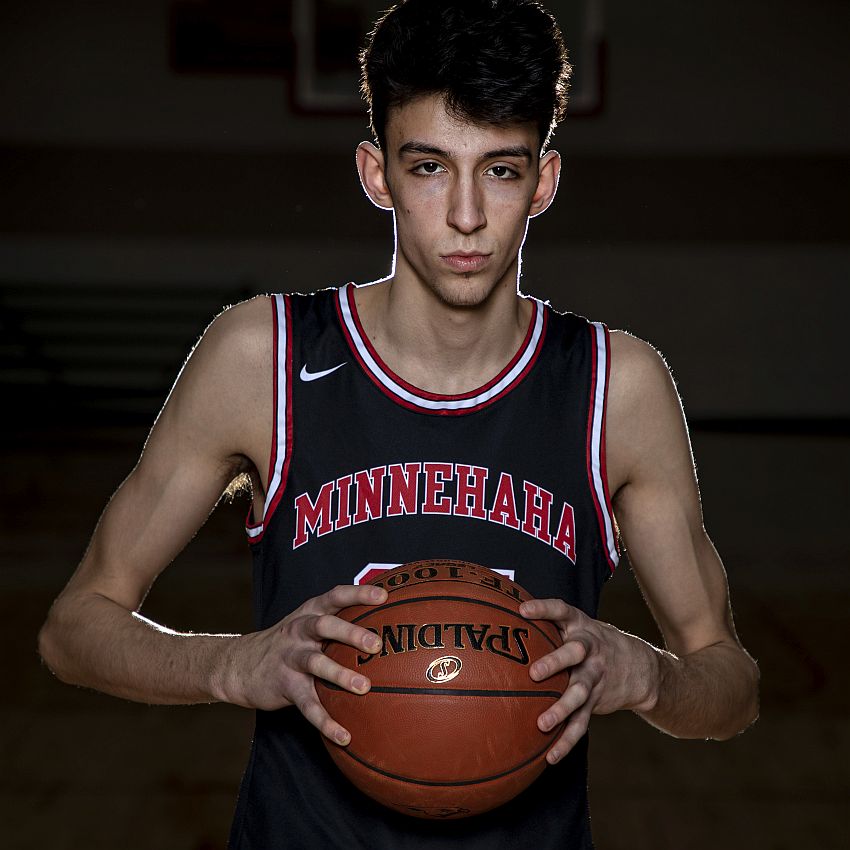 We’re deadly with the rock. Please support Passion of the Weiss by subscribing to our Patreon.

Caleb Sowle was banned from the McDonald’s All-American Game.

Soccer moms become Spielbergs in the artistic pursuit of compelling highlight reels for their athletic children. And just because it’s not something you’d catch at Sundance–make no mistake–the highlight reel is still a short film. For its subjects, it’s a ticket to a better life and a symbol of opportunity. The best reels lead to full rides at esteemed universities and all-star NBA careers. The worst ones sit on Youtube and Facebook as a happy reminder of how fun high school was. Almost all of them are creatively directed by supportive but borderline overbearing moms and dads.

This unfortunate detail means that a presumably washed adult has final say over the music that accompanies the reel. Perhaps this is what has led to the unjust dominance of Fort Minor’s “Remember the Name,” and Eminem’s “Cinderella Man”. And sure, these “Call of Duty” type beats are safe bets in the same way that Alec Baldwin plays a pretty good Donald Trump, but it’s become overplayed in 2021. Recruiters have seen it before and it’s just not the type of thing that catches John Calipari’s eye anymore.

What follows is a list of region-specific, reel-appropriate songs for the top 10 basketball recruits in the country. I do not expect Chet Holmgren’s mother to read this and take my advice, instead I intend to showcase a handful of good songs from some relatively random North American cities and expand our understanding of what the high school basketball highlight reel could be.

Kennedy Chandler is from Memphis which automatically puts him at an advantage over the other recruits on this list. In fact, some of Memphis’ worst basketball players are landing meetings with assistant coaches based solely on the strength of the local music they’re using for their highlight reels.

Although this artform is only meant to showcase one player at a time, basketball is still a team sport, and therefore tracks with three or more rappers make perfect highlight reel accompaniments. This one is brought to us by South Memphis’ 1017/Atlantic signee Big Scarr, and elusive up-and-comers Bhopo Da P, 23 Jay, and Shon P.

Nate Bittle from Central Point, Oregon committed to play college ball for the Ducks so it’d be easy to pick Amine –Portland’s proudest export that isn’t a craft beer — but it turns out Central Point is nearly equidistant to both Portland and Sacramento, which opens up a world of opportunity.

Sacramento has been an underrated beacon of hip-hop from the early 80’s with Triple Threat Three to modern pioneers like the late Bris. With the success of the new wave in Mozzy, Kony, and the Thizzler on the Roof youtube channel, young Sacramento rappers are finally getting their shine, and for good reason.

For this particular project, we call upon Shootergang affiliate Jojo and his track “Fresh Out,” which is appropriately dense with basketball references. It’s the oldest song on the list, at almost three years, and was one of Jojo’s last music videos before he was booked for robbery and sentenced to 13 years in prison.

If we dilute the University of Michigan’s college basketball legacy down to one period, it’d be the early 90’s and the arrival of the all-time great Fab Five recruiting class, of which Juwan Howard, their recent hire at Head Coach, is a member. With this 2021 class, it looks like Howard is trying to build a Fab Five of his own, with four commits in the top 50 and more expected.

The first UofM commit on this list is Moussa Diabate who was born and raised in Paris but went to high school in Bradenton, Florida. Bradenton, just north of Sarasota, is not a place that rappers are from but instead a place where old Northeasterners go to retire, so for Diabate’s highlight reel we’ll look at where he’s going instead of where he came from.

Less than an hour north of the boring college town of Ann Arbor, is Flint, Michigan- the most interesting hip-hop scene in the midwest right now. A casual rap fan might recognize the drawl of Flint’s own 42 Dugg from his breakout appearances on Lil Baby’s double platinum My Turn, or maybe they’d recognize YN Jay’s wheezing ad libs from his far-reaching “coochie” series, or perhaps they can’t shake the absurd imagery from the USPS’s very own Bfb Da Packman. Whatever it is, there was undoubtedly a Flint-shaped stamp on 2020 and it’s no fluke because the talent runs deep.

Again, basketball is a team sport and Flint’s “Starting 4” — which consists of Rio Da Yung OG, YN Jay, RMC Mike, and Louie Ray — complement each other perfectly and possess chemistry that puts every NBA team to shame.

Caleb Houstan is another Michigan commit that went to high school in Florida, so it’d be a good excuse to shine a light on another well-deserving Flint rapper but out of fear of redundancy, here’s something else.

While Houstan did go to high school in Montverde near Orlando, he was brought up in Mississauga, Ontario, which is a place that one might associate with R&B music, as it’s biggest exports are PARTYNEXTDOOR and Ramriddlz, but there’s actually some upbeat rap songs fit for a basketball reel making the rounds like “Backdoor” from the underrated AR Paisley.

Michael Foster, like many of the hoopers on this list, is attending high school far from where he was raised (Milwaukee), in hopes of setting up a long and fruitful career as a professional basketball player. He’s 6-foot-9 with a jumper, and if I was a local coach, my scouting report would say: “17-year-old buff Kevin Durant. Consider forfeiture.”

Another Phoenix transplant is CashSquad Chris, who got his start in Fresno with the Northern California/Bay Area support system upheld by the aforementioned Thizzler on the Roof, only to relocate to the booming desert metropolis of Phoenix, perhaps in an attempt to get in early on the “Silicon Desert.”

Rappers that moonlight as tech bros is a different conversation, and we can’t be sure that Cashsquad Chris isn’t talking about flakey investors and botched IPO’s when he opens this verse with “it’s a cold motherfuckin’ game” but one thing is for sure: put it under some of Michael Foster’s best plays and you have a certified scholarship magnet.

Jabari Smith Jr., from the southwest Atlanta suburbs, is the son of a professional basketball player and distant cousin of 2001’s first overall NBA draft pick, Kwame Brown. At 6-foot-10, and as a top 5 recruit, he is fulfilling his familial destiny of basketball dominance. His playstyle is cut from the same cloth as KD and Brandon Ingram- the cloth that makes defenses curl up and pass away.

In October of last year, he committed to play college at Auburn University, which is just across the Alabama/Georgia border and only about an hour and a half from his hometown.

In the same way that Jabari Smith Jr. is a distant cousin of Kwame Brown, the area where I-85 connects Georgia to Alabama is a distant cousin from the all-too-familiar elite rap talent of Atlanta. On “Straighten Up,” Columbus, Georgia’s F.S. Rudy connects with Mobile, Alabama’s Honeykomb Brazy who recently signed to J. Prince’s Rap-A-Lot records.

Patrick Baldwin Jr., currently sidelined with torn ligaments and bruising in his ankle, has not committed to any one school yet, but some people are speculating that he’ll stay home at UW-Milwaukee where his father is the head coach. It’d be the first ever 5-star snag for the Horizon League school, and every UW-Milwaukee fan would owe a debt to nepotism.

Northside Milwaukee’s ultra-creative Zed Kenzo makes most of her own beats, and is carving a space out in the industrial, noise-forward rap sound that feels at-home in the cold, often overlooked Milwaukee.

Her abrasive delivery is a contrast to Patrick Baldwin Jr.’s smooth playstyle, and it’s sure to grab the attention of the basketball gods even if he does turn down offers from Duke, Kentucky, and Michigan and decide to stay loyal to his hometown and father.

Duke commit and dual citizen Paolo Banchero does not play basketball like an 18-year-old. His full frame and ability to bounce make it look like he’s in the wrong gym or he’s playing a cruel trick on his little cousins, protecting the rim like Horton did Whoville. He commands the court with the same elephantine presence, which is why Coach K scooped him up.

And an artist self-proclaimed as Seattle’s Jay Z, 2oopaid TK, has one of the most unique voices in hip-hop right now. Rod Wave-ian if Rod Wave had a history of cigarette addiction or a taste for gravel.

My pick for Paolo Banchero’s highlight reel supplement is “Jungle,” featuring Tanaa Money and Maika Million. The music video acts as a tribute to Tanaa Money, who passed away tragically in late 2019. It’s a perfect ode to a side of Seattle not often heard from, a place that Banchero might miss when he departs for Durham, North Carolina.

Jaden Hardy of Henderson, Nevada is the best scorer in the class. He can make shots from anywhere on the court and can take the ball to the rim at will. The scary part is that he’s a playmaker too. Last season, on top of his 9+ rebounds per game, he averaged over 8 assists as well.

Hardy has not committed to any one college yet, and I am not very familiar with the greater Las Vegas rap scene (beyond Baby Keem, I guess) so picking a song for his reel took a little bit of research.

And thanks to the catalogue of MisterReeseFilmz, I found “Quicc Trip” by Jaay Sixx. The uptempo instrumental and all of its Middle Eastern affectations sound like any popular rap song, but when Sixx starts rapping, his hollow-tipped bars and firm pronunciations remind us that Vegas is still the West Coast.

The best basketball player in the class of 2021 is the 7-foot tall Chet Holmgren. He attends the elite Minnehaha Academy in Minneapolis, where he played with Jalen Suggs, last year’s 6th ranked recruit, and now currently plays with Hercy and Mercy Miller– Master P’s children.

At Holmgren’s height, he’s not only a world-class defensive force, but he also has “crossed Steph Curry” on his resume, putting him in a league of his own as both a rim protector and shot creator.

At only about 190 pounds, he lacks a bit on the block and resembles CinnaMon from the old Apple Jacks commercials, but his jumper is unguardable and weight can be gained. Whichever team he ends up with next year will become essential viewing as the world waits to see what he can accomplish.

For his highlight reel, I chose “Joe Dumars” by ShittyBoyz BabyTron not for any region related reason, but just simply because I think Chet Holmgren and ShittyBoyz BabyTron look a little bit alike. I have no doubts that BabyTron has a solid jumper, and I’m even more certain that if he too was 7 feet tall, he’d probably, like Chet, be built like Waluigi and sink shots from 30 feet out. The song itself is good too, and teeming with basketball bars like “we’ll bring the field to your house, Joe Dumars,” which is a reference to the Joe Dumars Fieldhouse in Detroit, and “34 shots, fuck around and Paul Pierce you,” which is a reference to Paul Pierce’s jersey number and, well, gun violence.