Most popular art about addiction tends to fall into two categories: wistful remembrances that elucidate the shocking ease of slipping into an unwanted habit, and the ghoulish rides into the terrifying logistics of feeding a hunger whose bottomlessness upends the addict’s life. Works in the latter category often feel like slow-motion car crashes. To weather Alex Cox’s Sid and Nancy biopic or watch Nicolas Cage drink his way through Leaving Las Vegas or crack the garish Mötley Crüe bio The Dirt is to spectate passionate, doomed characters’ methodical undoing. Works in the other category tend, however noble the auteur’s intentions are, to send up the anesthetizing allure of the “bad drugs,” if only to set up how bad the comedowns and withdrawals on the other end of a high can be. When I was in high school, director Danny Boyle’s lively 1996 adaptation of Irvine Welsh’s Trainspotting created a firestorm for glorifying heroin use. “Take the best orgasm you’ve ever had,” Welsh’s protagonist Mark Renton famously remarks, “multiply it by a thousand, and you’re still nowhere near it.” The New York Times noted that for a film wracked by substance abuse and self-medication, “it never does condemn heroin abuse.” Renton picks the habit up when he gets bored of walking the straight and narrow, and conveniently kicks it whenever addiction becomes an organizing force of its own.

I thought of Trainspotting when I saw the artwork to J. Cole’s new album, KOD. It’s a striking illustration of the rapper as a hollow-eyed king in a woolly cape concealing children smoking weed, popping pills, sniffing coke, and sipping lean. The cover is both profoundly haunted and entirely too heavy-handed, like an ace piece of D.A.R.E. or M.A.D.D. advertising. You can imagine Nancy Reagan hanging it on a White House wall in the mid-’80s and solemnly gesturing to it in a televised public-service announcement advising kids to “Just Say No” to drugs. Above the rapper’s head is a disclaimer: “This album is in no way intended to glorify addiction.” What strange times these are, that someone who has just created a painstakingly considerate album about the pitfalls of half a dozen different kinds of addictive and compulsive behaviors should feel the urge to inform you on the front cover that he thinks drugs are bad! Trainspotting didn’t give a shit whether you thought it was a criticism or a celebration of IV drug use. But Trainspotting didn’t live in a world practically defined by mixed messaging and deliberate subterfuge. 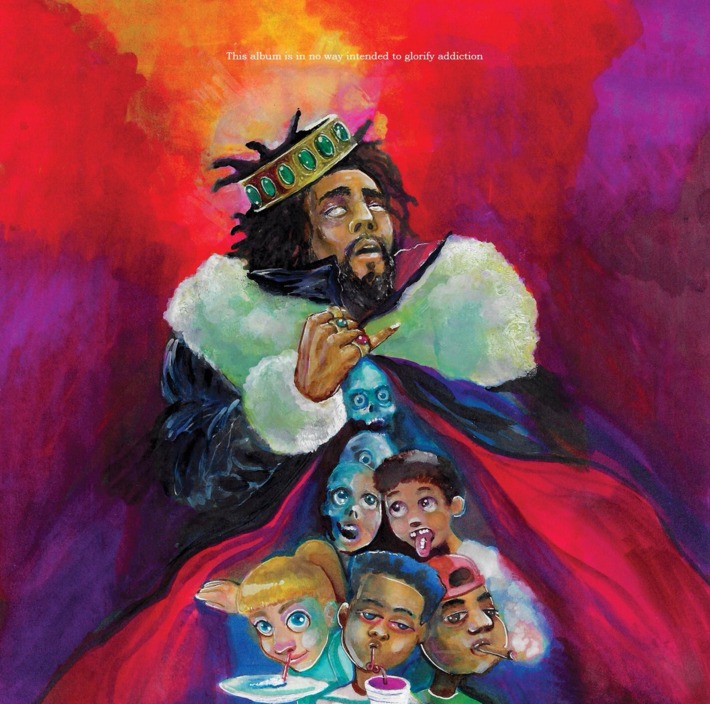 The disclaimer is KOD’s only real pulled punch, and it’s likely just a necessary step to get physical copies of the thing into stores with the pic of the girl blasting rails off a plate intact. Ten of KOD’s 12 tracks visit a handful of characters at various stages of dependency to sex, drugs, money, and the internet. “Photograph” watches a lonely young man fall in love with a beautiful woman through her social-media profile, but missing from the rush of infatuation is the sense that they’ve ever met or even spoken. He’s in love with a feeling he gets when he creeps her page; he can never figure out how to say so. “ATM” warns of pursuing money too adroitly over a beat that ticks and whirs like a cash machine. The video is a winding expanse of loose dollars and casino Texas Hold’em tables, a druggy, surreal cross between Hype Williams’s old Busta Rhymes videos, French director Gaspar Noé’s vibrant astral-projection nightmare Enter the Void, and ancient Greece’s myth of Icarus. “Kevin’s Heart” appears to dramatize comedian Kevin Hart’s admission of marital infidelity as it ponders secret sex addiction; “Once an Addict (Interlude)” and “The Cut Off” illustrate the harm a single person’s using can inflict on everyone else around them.

It’s easy to get lost in the bombast of an undertaking this big, where an artist attempts to weave several divergent sociopolitical vectors into a single statement about some flaw in the human condition. Director Darren Aronofsky’s 2000 drug film Requiem for a Dream offset its story of grifters hooked on heroin with the story of one’s mother slipping into amphetamine dependency to try and squeeze back into a dress she’d outgrown, while his girlfriend destroys a promising career as a designer trading increasingly risky sex for drugs. Aronofsky’s work loses its soul as its tenderness gives way to lurid ultraviolence. Its subjects start to feel like devices, ill-fated characters in an overbearing weedsploitation flick like Reefer Madness, or the cautionary vehicular carnage people are shown sometimes when they’re caught driving drunk.

KOD largely, smartly eschews this kind of melodrama. A more overtly sanctimonious artist would probably go for the juicier angle in “Kevin’s Heart,” voicing the wife’s outrage at her spouse’s betrayal instead of detailing the husband’s suffocating internal world of secrecy, carelessness, and shame. “Heart”’s concern with the guilty party’s path makes it feel like a prequel to the hard reckoning and family therapy of Jay-Z’s 4:44, a broken man trying to summon the courage to bring his own deceitfulness to light. That’s a level of consideration not even the great rap songs about destroyed lives are willing to commit to; Suzy Skrew and Sasha Thumper, the bad girls from Outkast’s “Da Art of Storytellin’, Pt. 1,” are really only there to make Big Boi and Andre 3000 look sharp and reflective. No one lifts a finger to save Nas’s “Black Girl Lost.” As KOD draws to a close, it makes a few strong plays at changing lives. “FRIENDS” implores several of Cole’s acquaintances to stop making excuses for their shortcomings and work hard at realizing their dreams. “1985 (Intro to ‘The Fall Off’)” responds to static with another rapper by explaining in great detail how he can lose his livelihood in five years flat if he’s not careful.

“FRIENDS” and “1985” are spots where J. Cole will likely be called to the carpet as your run-of-the-mill, self-righteous conscious rapper talking down from his high horse about pharmaceutical drugs and mumble rap. “FRIENDS” gets caught in that trap in a verse where Cole calls out neighborhood kids fighting anxiety with weed and pills: “You running from yourself, and you buying product again / I know you say it helps, and no I’m not trying to offend / But I know depression and drug addiction don’t blend / Reality distorts, and then you get lost in the wind.” Depression, anxiety, and PTSD flourish in disadvantaged communities in part because of the very insinuation that all of our human problems can be solved by prudent soul-searching. The song’s closing refrain of “Meditate, don’t medicate” is cloying junk science. Floating the suggestion that prescriptions are an on-ramp to addiction to people using them to find peace is a dangerous gambit; we don’t tell people with angina to tough out the chest pains.

“1985” attempts a backhanded peace-making gesture after the scathing attack on young artists Cole called “fake drug dealers turned tour bus rappers” served in 2016’s “Everybody Dies.” “I must say, by your songs, I’m unimpressed, hey,” Cole says in the new verse, “but I love to see a black man get paid.” The tone is caring but snooty, like a church pastor crudely speaking your business in a sermon he thinks you need to hear. The too-neat conclusion of the tax song “BRACKETS” — where Cole breaks a rant about what the government does with his money to tell a story about a murdered kid that comes full circle with the mother fretting about filing taxes on the way to her son’s funeral — is a textbook preacher’s tall tale.

Cole thinks the generation of rappers behind him should know that there are white listeners who use their music to approach and even effect blackness. This isn’t news. The story’s been the same since Public Enemy blew suburban teenagers’ minds on the Beastie Boys’ tour in 1988, and since rural listeners started calling 50 Cent “Fiddy” because that’s how they thought the hood pronounced it. Cole’s playing into the suffocating schism that suggests trap is a lesser, disposable art when he says, “One day, them kids that’s listening gon’ grow up / And get too old for that shit that made you blow up / Now your show’s lookin’ light cause they don’t show up / Which unfortunately means the money slow up.” (A recent argument between T.I. and Gucci Mane about who invented trap music suggests the subgenre is at least 15 years old. How long does a sound have to live before we stop calling it a flash in the pan?)

KOD’s music suggests J. Cole isn’t coming from as rude of a place as the shots in “1985” hint at. His lines are full of flows that show he’s actually been listening to a lot of the new rap he is assumed to hate. The spitfire, start-stop lines in the verses of “Photograph” invoke XXXTentacion’s “Look at Me.” “The Cut Off” and “ATM” kick triplets like the Migos. If Cole hates “SoundCloud rap” and “mumble rap,” perching a whole album on their issues and their cadences is a peculiar way to show it. It’s possible to celebrate hip-hop’s growth and worry about it stagnating and plead with its stars to be better stewards without malice. However bullish or idealistic his manner can be, Cole is trying to use his stardom to push his peers to greater heights. We should commend him when he does this well and challenge him when he doesn’t. As an exercise in nudging J. Cole’s insular, conservative brand of feature-free retro-rap further out into the changing world around it, KOD mostly floats. (Cole should maybe call on some session singers to sweeten up his idea for melodies, and if he’s as interested in the success of other rappers as “1985” suggests, he should open himself up to collaboration instead of handling everyone’s flows himself.) As a counterpoint and a word of caution to the architects of songs celebrating controlled substances with hefty body counts, we could all stand to take some time to sit with it and reflect.

The Unerring Power of ‘This Woman’s Work’