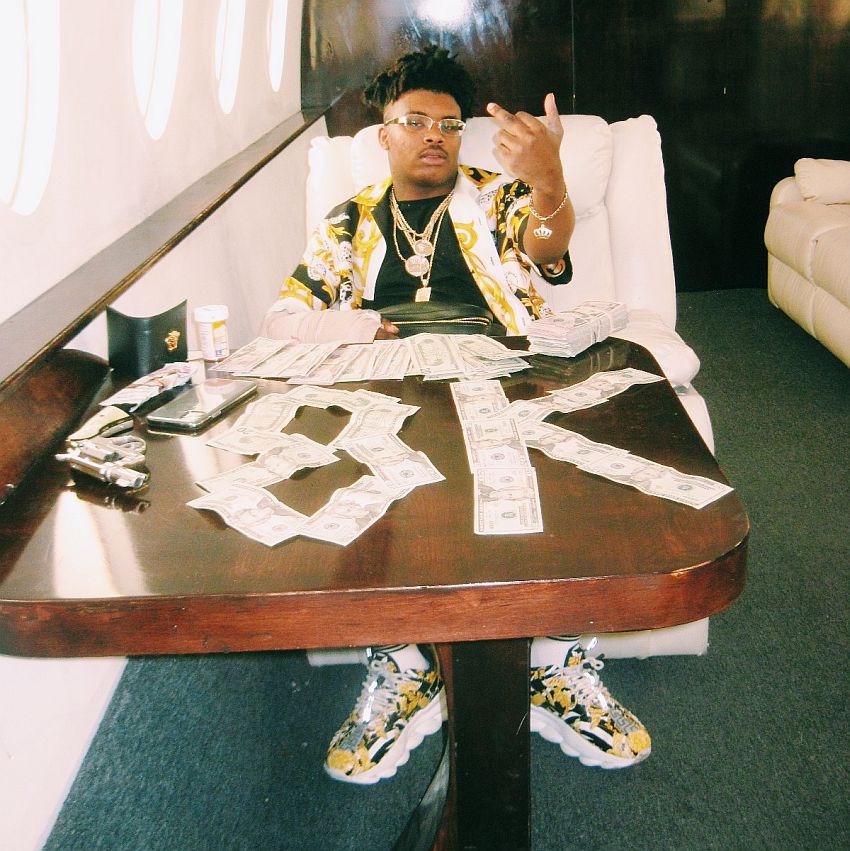 KINGMOSTWANTED blew up on TikTok and has managed to continue making good music. In what you can only call a minor miracle, the inland empire youngin’ has had songs like “Different Varieties” co-opted by Connecticut teenagers (we see you, Charli), and hasn’t let the thrill of virality taint his vision. KING explains it easily enough. They like his shit, so every song he does he posts on the app. If they dig it? More money. if not? Who cares. It’s just a piece of the puzzle.

KING first broke through on “In My City” with MCM Raymond, the sort of post-Greedo single that bumps with “Grindin’” era percussion, a bittersweet melody, and piano stabs that are equal parts ominous and inviting. KING’s found sustained success in the past year mostly because the broken criminal justice system has finally backed the fuck off. KING was trapped in the juvie system up until he was 18, and much to his surprise, was mostly left alone when he “graduated.”

This isn’t a system of rehabilitation and maturation, rather, KING is the exception, the rare case who has turned that experience into a “never again” moment. He’s not moving differently, mostly because he knows the cops never had anything on him in the first place. For many, that simple fact doesn’t make a difference, but KING is taking advantage of his freedom. Alongside Raymond and some other friends, KING has started a collective, 8PETOWN, a group of young adults and 20-somethings who spend all day recording rap songs together and making merch. It’s like the TikTok houses, but not absolutely horrifying.

KING has a wildly entertaining POV, he’s bad because he sags his pants low, and he equates the feeling of love to the heart racing feeling that comes with popping Molly. KINGMOSTWANTED’s Freshman Year from last year is an exciting next chapter for the MC. He re-creates the controversial XXL list with deserving stars like Quin NFN and AzChike. KING’s beat selection and delivery is clearly indebted to the L.A. MC’s that came before him, signaling that the influence of crews like Stinc Team and rappers like 03 Greedo are already resonating amongst the next crop of superstars. — Will Schube

You’ve got some good guests on Freshman Year. You have Quin NFN and AzChike on there, too. How did you decide to get all of these people featured on the album?

You’re always recording, so how do you decide when things are ready to go versus when to hold onto some songs?

KINGMOSTWANTED: Oh yeah. I just be with my team, I go over it with my manager and he be telling me what he be thinking and shit, and I just be going with him off of that.

Can you talk to me about 8PETOWN and the idea behind having this collective?

KINGMOSTWANTED: We just got the merch and everything, we’re trying to get that out there, and we’re just constantly trying to keep switching the merch constantly to where we can have a new shoe drop every week. We want music out all the time, too. We’re just a solid team – that’s what we is right now.

What do you like about MCM Raymond and his style that makes you guys good collaborators?

KINGMOSTWANTED: It’s a whole different vibe. For my voice, sometimes I am coming in with smooth talk or I come in hard, but no matter what, with Raymond, I can always count on him to deliver. I like the way his voice follows up after my voice too.

What’s it like living in a house with your whole crew? Does it get pretty crazy in there, or are you guys just mostly focused on music right now?

How do you manage to balance that though, because I know the cops have been harassing you for a long time? How do you balance having fun with trying not to slip up, because they’ll try to do anything to get you back in trouble?

KINGMOSTWANTED: Like I used to say before, it’s a whole different vibe from being a probationer and just being an 18-year-old kid. I could post blowers right now, a 50-round drum, and they can’t do shit because I’m not on probation; but if I was on probation, I could go to jail right now for that shit. The “In My City” video, they took me to jail for being around probationers, and just being in a street gang and being around a street gang and shit like that, but if I was a regular teen [not on probation], they can’t do nothing with those pictures – they can’t act off of pictures; they have to have some type of evidence. They would really have to catch me to really get me. They can’t catch me right now; they can’t do nothing to me.

Why do you think they’re targeting you?

KINGMOSTWANTED: Because we’ve shown we don’t give a fuck about none of that shit. We ain’t scared of no police officers, nobody, we’re just doing what we do. If anyone’s in the way, they’re going to get knocked over, but other than that, we just on our own path. Everybody can go up, that’s how I feel, everybody can go up at the same time, or we could all be enemies, it doesn’t matter.

With your crew, is there some healthy competition too? Do y’all try to out-rhyme each other?

KINGMOSTWANTED: I wouldn’t say out-rhyme each other, but we be pushing ourselves hard on each other’s songs, because we want to make the best out of our sounds. Especially with Raymond, if I’m in the stu, I’m going to make sure cuzzo puts his full ability in his verse or whatever when we collab and shit.

How did you like growing up in San Bernardino?

KINGMOSTWANTED: It’s a different vibe, but I moved out when I was pretty young. I moved to Victorville, to the high desert.

How’d you learn how to rap? Were there older kids you were around that were showing you the ropes, or did you teach yourself?

KINGMOSTWANTED: I always had the ability to rap and rhyme and shit. I would always be in juvenile hall or whatever and I’d be shooting on the homies, but I’d be rapping, just gassin’ them, talking nonsense, but really getting in their head, just putting shit together. The police officer, she took me to the side and was like, “You really know how to put shit together, like, you should put together a song or something like that.”

That’s an interesting vote of confidence. What was it like being stuck and trapped in that cycle of juvie? It must have been emotionally taxing on you.

If you could give advice to your younger self, what would you say to avoid that?

KINGMOSTWANTED: I feel like that’s part of the reason why I rap the way I rap, and why I’m able to deliver the way I deliver, because of shit that I’ve already been through and shit. I wouldn’t say anything; I like where I’m positioned at right now.

Do you view yourself as a mentor to young kids in your community, trying to help show them a way so that they can escape what you fell into?

How did you get popping off on TikTok? Is that something that you were trying to exploit from the beginning, or did that just happen kind of randomly?

KINGMOSTWANTED: That shit happened randomly. I checked “Different Varieties” and that motherfucker — when I first got on TikTok, it was already at 100 thousand videos. I didn’t even know what a TikTok was, n****s was just sending me that shit on Instagram. I was always intact, and I always had a strong social media base, so somehow, I’d just be booming. Before that, I wasn’t really booming, I was just okay, but it was in my hands watching myself go-up at the same time. I dropped “In My City” and people were just going towards it naturally. Everybody’s saying, “Who is this?” and I’m looking at the comments seeing what everybody thinks, and I’m like, “Okay, they hear me, but they don’t know ‘KINGMOSTWANTED.’”

Did you start ever catering your music to TikTok to keep that going?

KINGMOSTWANTED: I have distribution, so all of my music goes on Tik Tok. When it starts trending, it’s just natural.

It’s crazy how that can happen naturally. Have you been able to take a step back yet and think about how insane that blow up was?

KINGMOSTWANTED: Yeah, I be focusing sometimes, I be like, “Man, I came a long way pretty fast and sprung.”

What do you hope someone listening to your music takes away about you and what you’re doing?

KINGMOSTWANTED: When they listen to my shit, they should really listen and really hear me talking. I’ve got something to say.

Bandcamp’s Waived Fees Result In $7.1M In Sales For Artists