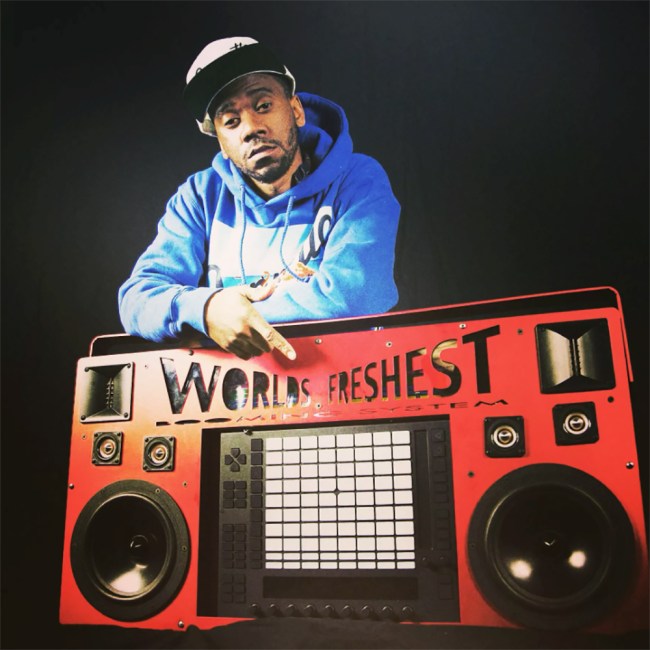 Straight killer, no filler. We put in the work without the ads so you can get straight to the best music journalism in the game. Support us by subscribing to Passion of the Weiss on Patreon.

Evan Nabavian got scammed by Teejayx6 for the culture.

Many producers offer stadium-sized beats, but DJ Fresh’s music is gigantic in a way that sounds alien. The Bay Area producer’s music is distinguished by reverb from colossal kickdrums and echoing claps that sound like Manute Bol high-fiving Zeus — sounds that transcend trunk subwoofers and the Staples Center and instead bring to mind the bump and grind of celestial bodies. When you hear DJ Fresh’s signature tag — a computerized “DJ Fresh, DJ Fresh, DJ Fresh” — the music is going to knock very hard.

An exemplar of this sound is “Hella Guap” with Planet Asia from 2015 where a pervasive echo makes it sound like it was recorded in an aircraft hangar. Another is the 2008 local classic “No Hoe” by D-Lo (or its superior posse cut remix) which also has DJ Fresh’s fingerprints on it and achieves the platonic ideal of house party music with an opening blast of crack-the-cement drums. It’s sparse in the extreme, as if Fresh (or perhaps Fresh and D-Lo) made it with two index fingers and a keyboard. Minimalism with an austere, brutal palette gives Fresh’s bangers a unique texture.

A congeries of influences likely gave DJ Fresh his keyboard legerdemain. Per an interview with Thizzler on the Roof, Fresh was born in Baltimore and he moved to San Jose with his mother to avoid Baltimore’s pervasive crime. Much of his family remained in Baltimore, so he shuttled between the cities until he was 17 when his mother’s failing health forced him to assume the responsibilities of an adult. He grew up breakdancing and DJing, the latter of which opened doors for him. In 1999, he came in third place in the International Turntablist Federation DJ competition and caught the attention of Nas who brought the teenager on as the DJ for the Stillmatic tour. DJing is a family trade; Fresh’s brothers are DJ Dummy and DJ LS-1.

Back in the Bay, DJ Fresh shifted his focus to production and parlayed an encounter with Mistah F.A.B. into a 2007 album called The Tonite Show which Fresh developed into a series of full-length collaborations with local rappers. Soon, having your own edition of The Tonite Show became a rite of passage in the Bay and beyond. DJ Fresh cut albums with street rappers like The Jacka, Ezale, and Laroo but he also made inroads with the backpack crowd, working The Grouch and Zion I. Bigger names from beyond the Bay took note: Raekwon, Freddie Gibbs, Jay Worthy, and Curren$y each have a Tonite Show to their name.

DJ Fresh is prolific to the point where his discography is unwieldy. It’s easy to miss entire albums from the past decade that he produced front to back. Outside of his Tonite Show series, he has instrumental pet projects that he drops on SoundCloud, like the multi-volume Late Night Freeway Vibez series. Speaking to Thizzler, he cited an Andre Nickatina axiom about persistence: “Just keep the store open.”

His model is unusual — album length commercial projects that he fully produces (“street album” and “commercial mixtape” get thrown around). Early in the series, Fresh would encounter resistance from rappers and their labels who thought people would confuse an iteration of The Tonite Show with the rapper’s “main” album. Rappers would respond to this by treating their Tonite Show albums less seriously than their proper albums, but he regarded this as an advantage because artists would come to him to have fun and make better music as a result. You don’t find many overwrought concepts and labored narratives on DJ Fresh’s albums. The Tonite Show with Freddie Gibbs came out within three months of Gibbs’ Pinata album with Madlib. The latter has catalog highlights and legendary guests. The former features cheap artwork and a shamelessly horny sex anthem over one of Fresh’s most luxurious beats (“I Wanna Do It”).

There’s another kind of DJ Fresh beat. When he’s not making futuristic Bay Area slappers, he’s reaching for 80s grooves. “Bitches Ain’t Shit” with Celly Ru is straight barbecue funk while “Strange” with HD borrows everything except the jheri curls from Cameo. DJ Fresh told The Fader that street rappers never balk at cheeseball 80s beats. “They love that shit. It’s tight because these dudes are talking about some of the most hard shit ever over these smooth beats. Plus, most of them grew up on this shit just like I did,” he said. Throughout his work, there’s a facility with melody that sets him apart from other producers from his generation.

On the opening of “Less Broke,” Cousin Fik explains DJ Fresh’s appeal without the aid of writerly euphemisms. He asks his producer, “Can I get something simple, but still slapping extra hard? You know how you do that shit, bro.” A Whodini-era drum machine kicks in. Fik affirms, “Yeah, that’s it.”

As is our wont at POW, we culled the very best of DJ Fresh from his formidable discography into an essential playlist. You’ll want to listen with a proper sound system.

Interview: Chamillionaire On Navigating Through The Tech World & Alleged Retirement