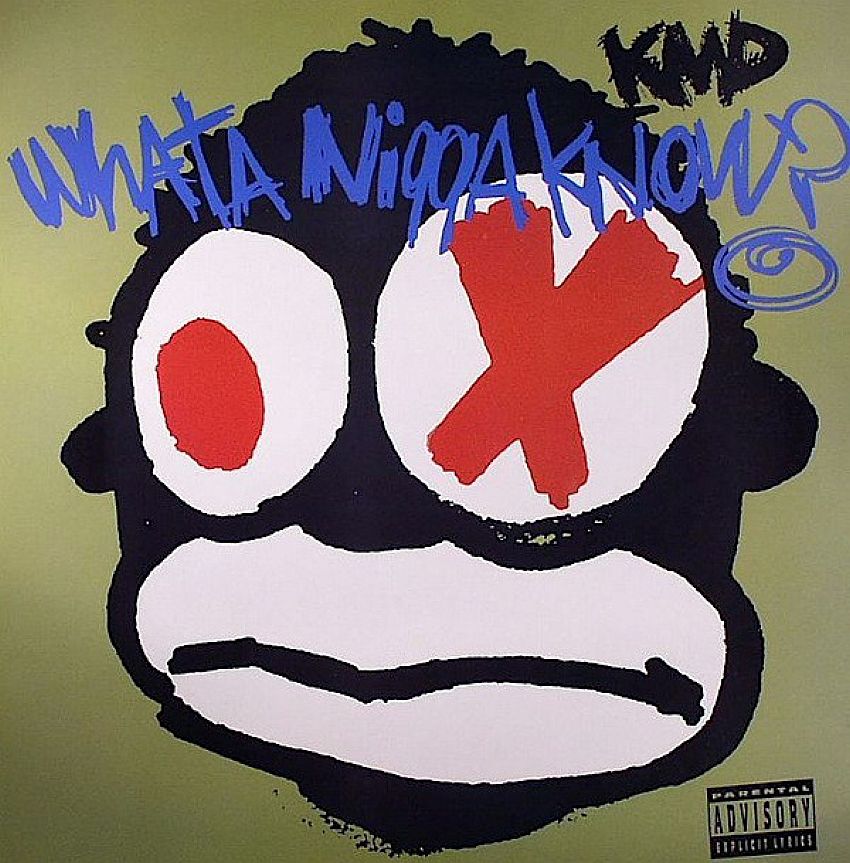 Suckas is froze like mannequins while we continue to relentlessly document hip-hop culture. Please support Passion of the Weiss by subscribing to our Patreon.

Who got a style that comes close to Oliver Wang? (None!)

In April of 1994, Elektra Records released what was meant to be the lead single from KMD’s sophomore album, Black Bastards. It went by two slightly different titles. On the label itself, KMD entitled the song “What a Niggy Know,” a razor-thin fig leaf designed to appease radio programmers, but on the 12” cover, it was entitled “What a N____ Know,” and in a further act of provocation, the cover art depicted a full-size version of the Sambo caricature that MF Doom (Daniel Dumile) — back then still known as Zev Love X — had created for the group’s Mr. Hood debut in ’91.

Black Bastards was intended to be more confrontational in its attitude. Much like how De La Soul used their own sophomore album, De La Soul Is Dead, to kill off the “hip-hop hippies” label that had plagued them for years, Black Bastards was KMD’s own reclamation project to assert they weren’t just adolescents rhyming over Sesame Street loops. Black Bastards was headier in its lyricism, more sophisticated in its production, and had it come out as intended in that spring/summer of 1994, it likely would have taken its place alongside other celebrated sophomore LPs of the golden era, including A Tribe Called Quest’s Low End Theory and Digable Planets’ Blowout Comb. Of course, that’s not what happened.

It’s impossible to talk about anything connected to Black Bastards without acknowledging the string of tragedies around it. Most obviously was the death of Doom’s brother, Subroc (Dingilizwe Dumile), killed in a traffic accident in the spring of ’93, just as the album was being finished. As detailed by DOOM and Pete Nice in Brian Coleman’s Check the Technique Volume 2, what followed would be an annus horriblis.

Instead of Black Bastards serving as an elegy to the talents of the fallen Subroc, the album’s cover art, which showed the Sambo character being lynched, drew the ire of Terri Ross and Havelock Nelson, both Black music writers at Billboard Magazine, who complained about the imagery in their respective columns just as “What a Niggy Know” was gaining airplay. Ice T/Body Count’s “Cop Killer” controversy from ’92 was still fresh on the minds of executives at Elektra and rather than work out a compromise, their solution was to drop KMD and return the album to DOOM. As he told Coleman, Black Bastards was now radioactive as far as the rest of the music industry was concerned: “we shopped it and everybody shot it down… It just seemed that, all of a sudden, motherfuckers didn’t want to fuck with me anymore.”

Various parts of the album would find its way to the public over the next six years, including on poorly mastered bootlegs plus an EP on Bobbito’s Fondle ‘Em label. In 2000, DOOM finally began releasing versions of Black Bastards through partnerships with Readyrock, Sub Verse, and his own Metal Face Records. “What a Niggy Know” remains the only single from the album released on its original time frame but at least it offered a modest bounty of riches, with three songs off the LP — the title track, “Constipated Monkey” and “Q3 119” — a couple of instruments but most notably, the 12”-only remix of “What a Niggy Know.”

The remix opens with the quavering, unmistakable tenor of Gil Scott-Heron mournfully singing “I saw the thunder and heard the lightning…and felt the burden of his shame.” Taken from the title track of Scott-Heron’s 1971 album, Pieces of a Man, the snippet feels like a deliberate nod back to the LP version of “What a Niggy Knows” which also visits the Black poetry movement by sampling the voice of Last Poets’ member, Gylan Kain, from his 1970 The Blue Guerrilla album.

However, while the LP version becomes more upbeat, thanks to the primary loop boosted from Jody Whatley’s “Looking For a New Love,” DOOM’s remix stays in the darker mood that Scott-Heron’s voice invokes. It’s an enigmatic way to open the song; I remember thinking at the time “wait, what lightning, what thunder? Is this literal or metaphoric? And whose shame and why?” But before one can dwell that deeply on those questions, you’re swayed back into the DOOM’s track as he layers Little Richard’s lively “The Rill Thing” drums over a filtered bassline presumably made from elsewhere on Scott-Heron’s song.

DOOM then comes in with some of the fiercest lyrics he penned during his Zev Love X phase, comparing himself to the likes of “Dr. Death” Jack Kevorkian and subway shooter Colin Ferguson, and boasting, “I never O.D. on my diet of codeine and O.E.” as well as “ n____ never lived to hear me diss him on no record.” In the three years between albums, Doom’s voice had slightly dropped into a lower pitch, a sneak peek of the gravitas he’d bring once he formally introduced the MF DOOM persona in the late ‘90s. However, even he would be “out-doomed” by the remix’s featured guest: MF Grimm.

In ’94, Grimm was still a relative unknown, having only released the 1992 single, “So Whatcha Want N____,” under his old alias, The Grimm Reaper. His verse on the “What a Niggy Know” remix was a powerful introduction to a wider audience, sparking things off by aggressively intoning “Who will survive in World War 3? (None!) Who got a style that come close to me? (None!)” From there, Grimm lets loose over 30 pugilistic bars of violent imagery, few better than his off-kilter closer:

Sad songs to your savior to sacrifice your soul to prayers failed
‘Cause God moved like a snail/so death prevails
You’re deader than a doornail
Lips blue, skin pale, all hail…
Grimm!

In a dark, tragic irony, the day after Grimm laid down the verse, he’d be shot and paralyzed from the waist down. Despite that, he’d go on a prolific recording career, including key collaborations with DOOM, most notably their “MF” EP in 2002.

All songs mark moments in time and the “What a Niggy Know” single was a snapshot of one such, somber “what if?” instant: what if Subroc had lived or Grimm hadn’t been paralyzed or Black Bastards hadn’t been blacklisted? Coming a year after Subroc’s death, it was always a release shrouded in bittersweet sorrow. But despite that, when I listen to it today, I feel mostly the same way as when I first heard it back then: exhilaration for a release brimming with potential pumped into every bar, every beat. As Daniel Dumile demonstrated in all phases of his mercurial career, he was an incomparable and unpredictable auteur of the highest order. Even in a life that ended too soon, he still allowed us to see the lightning, hear the thunder and feel the mastery of his game.

Are Ghostface Killah and Raekwon The Next ‘Verzuz’ Matchup?