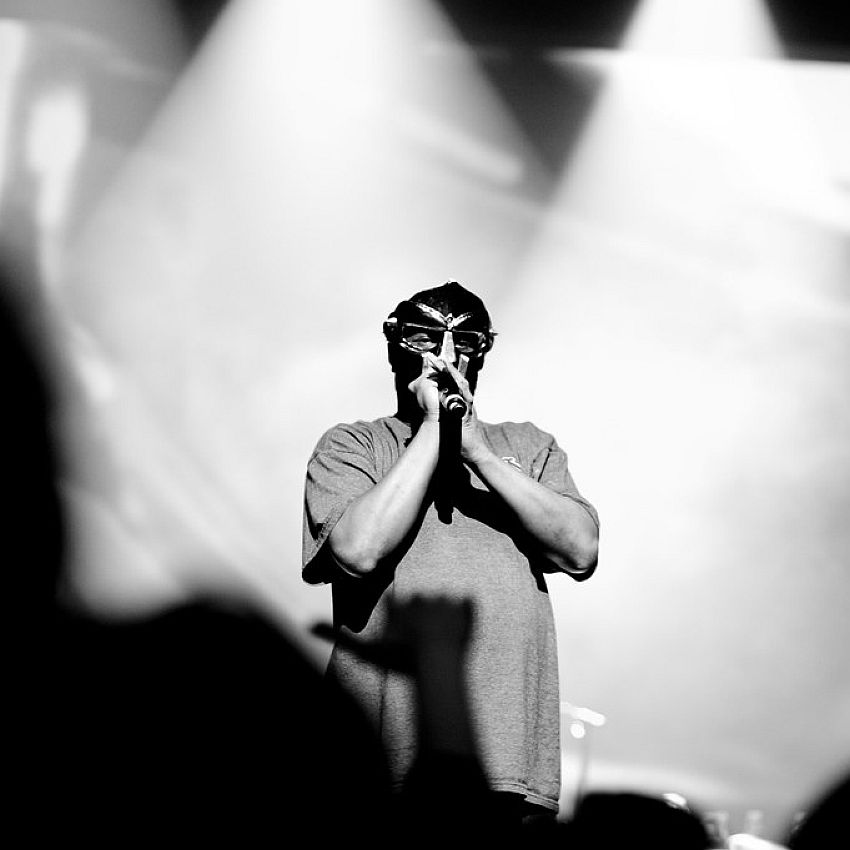 We came to wake you up out the deep sleeper. Please support the ring generals at Passion of the Weiss by subscribing to our Patreon.

Rhys Langston been rhyming longer than Sigmund the sea creature.

Do not resist the urge to bemoan the easiness of pre-fab sound packs, YouTube-search sample rips, and DAW magic tricks bordering laziness— at least not while we’re fresh in the wake of Daniel Dumile’s passing. MF DOOM, Viktor Vaughn, King Geedorah, Zev Love X, Metal Fingers, the Metal Face Terrorist, you know, one of the all-time greats in his amalgamated selves. As one of the most uncaged and inspiring rappers and writers to use this mongrel language of English and appropriate its global cultural footprint, you’d be a fool to not also take the supervillain as a master of his particular school of digging and sampling.

DOOM siphoned and commandeered comic book and cartoon ephemera, sci-fi and pulp fiction fragments as an expert collagist. He is up there with the early pioneers who lassoed jazz and funk into a pillar of its own; those who draped their self-mythologizing in kung fu movie cutouts; or the artists who reworked rock riffs to semi-intentionally play with the color line of an increasingly corporate outlook on hip-hop; among many other virtuosos, schools and disciplines. It’s the accepted tale that DOOM’s compulsive ambling together of nostalgia and pop culture through decades and scores of releases was his retro-fitted reconstruction of the self as many selves— the many heads and egos we are all tripping over as we try to commemorate his life and times.

As has been explained and theorized in many a biography and obituary, the death of his brother Subroc and the shelving of their group’s sophomore record were the seeming catalytic events for his break from the limelight, then masked return to the mic and deeper dive to the nerdy and whacky ends of the CRT receiver and record (and tape) bins. He channeled that pain and left us with a blueprint of self-mythologizing to rival Sun Ra himself, with a plush collection of gems and nuggets to sort through.

I dedicate this tribute to Mr. Dumile in his King Geedorah incarnation, and center in on his track “Fazers,” the classic intro that begins his 2003 Take Me to Your Leader. Its muddily-sampled grandeur, unmistakably DOOM-like, broadcasts the earthly arrival of a 3-headed reptile from outer space, probably materializing through a duct-taped transporter deck, with three ashed blunts for each mouth on the center console. Yet I’d be remiss to not acknowledge the irony of my preamble, in that the metal fingers apparently didn’t source or chop this song’s main loop themselves. In DOOM’s own words, apparently Geedorah’s co-producer E. Mason looped some strings in a vintage porn scene that would come to comprise the beat’s melody. Dumile-as-Geedorah then simply hit the drum pads and placed an Invasion of the Astro-Monster soundbite to herald his touchdown.

But that purist detail doesn’t change the fact that “Fazers” is my favorite song in the DOOM universe, canon, consortium, what have you. In astrobiological terms, as Geedorah might frame it, this track exists in the circumstellar habitable zone, also known as the Goldilocks zone, the perfect orbit range around a star where liquid water can exist on the surface of a planet to support life. Rather, in this rap shit, where the beat is unshakably hot and the rhymes are continuously cold.

Like for real, every single bar on “Fazers” is quotable. As well, it is one of the infrequent tracks where Mr. Dumile’s rhyme scheme is more understated than some of the wilder, expressionist styles anyone can hear through Operation: Doomsday to Czarface Meets Metalface. His signature assonance and internal rhymes are sprinkled here to perfection, with the structure of continuously daisy-chained couplets of hard end rhymes. The more steady rhyme patterns and slower BPM of the instrumental shows all us underlings Geedorah’s landing is majestic and smooth through the seamless verse. He bears extraplanetary street wisdom, spits the chillest space monster bravado, and entices us to relate to his intergalactic parenting concerns. Ask anyone who knows this number if they listen intently, anticipating the track’s crystallization at the ending 8 bars:

King Geedorah, crush on the seed’s teacher
They need to pay ’em better, she had nothing on the reefer
Heffer, and I had to offer her a stick of gum
She was as thick as they come, but taught a strict curriculum
Which is only good for my son
When I’m in the hood, razor’s on tongue
Nowadays it’s amazing raising young
Rule number one: Keep your fazers on stun

These days the song’s name checks like Sling Blade, Sigmund the Sea [Monster], ZZ Top, and even the forgotten, animated BET host Cita, can seem like a foregone conclusion for a left-field rapper to brandish in a performance of esotericism. But Daniel Dumile as Geedorah as DOOM as whichever of his egos, really lived in the crates, crouched between cable channels, scooped handfuls of detritus culture like glucosamine tablets to create and strengthen the joints that connected the limbs of his commentaries, musings, and prattlings on any and all things. He extracted the otherwise corny in movies, records, archival strangeness and transmuted it into distinctive mythos and dopeness. “Fazers,” for me, is the clearest distillation of that.

If A Tribe Called Quest gave us Beats, Rhymes, and Life, DOOM gave us Beats, Rhymes, and Mischief. And in that mischief there was an unceasing imagination that allowed whole universes to form. We live in the shadow of the breadth of possibilities he opened. I sure as hell feel it, as a rhymer, producer, and artist in the general sense. He sustained a level of artistic license that gave every hip-hop artist after him a new degree of freedom to be themselves in their own bespoke magic.

And now we are left without his physical presence, no matter how rarely we were privileged to encounter it in person, or even in video, during the two and a half decades of the supervillain’s career.

Quirky, otherworldly, and incongruous with undeniable head nods is what we can all imagine plays on loop wherever DOOM is passing, rhyming, sequencing through, in whatever afterlife there may be.

And even if it is solely audio, we can bet it will reverberate out as if the sound waves were spelled in ALL CAPS.