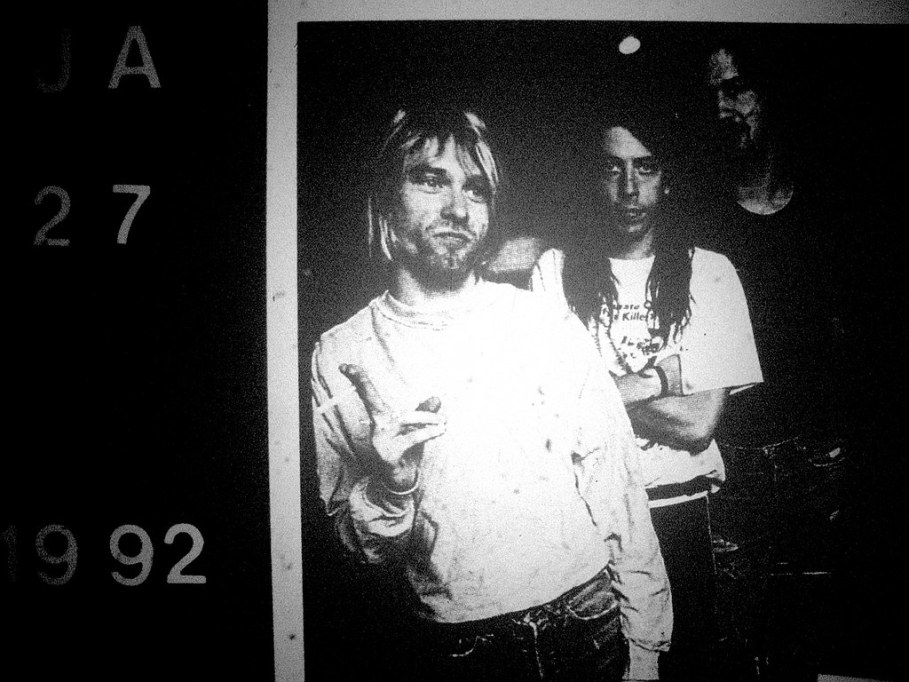 Donate to our Patreon to receive exclusive playlists and save us from a fate of having to file shady lawsuits like the now-fully grown baby from the Nevermind cover.

Exactly one decade and several lifetimes ago, the NME sent me into the sweltering intestines of the West Valley to sit down with the surviving members of Nirvana and their producer Butch Vig. Grohl perfectly matched his reputation: the platonic chill bro who off-handedly doubled as one of the greatest drummers in history. The kind of guy who would invite you surfing afterwards and casually recite the history of every bulldozed venue from here to the county line. Novoselic was dour and intimidating, a grim straightforwardness that perhaps foreshadowed the rightward turn that he’d take in the ensuing years. Vig served as an amiable bridge between the diametrically opposed rhythm section.

I only got about half an hour, predictably concentrated on the absence of Kurt Cobain. The other guys aren’t the ones selling all those t-shirts. The article never ran online, merely printed in a copy of a magazine that now exists in a form scarcely more living than the Nirvana lead singer. In honor of the 30 year anniversary, I’m re-printing the Q&A here in full. —Jeff Weiss

With the settled dust of 20 Septembers, drummer Dave Grohl, bassist Krist Novoselic, and producer Butch Vig reminisce inside Studio 606, deep in Los Angeles’ San Fernando Valley. This is Grohl’s Foo Fighter hangar—a sprawling cinder block compound swathed in old science fiction posters and enough rock memorabilia for a small Hall of Fame. But our topic is Nirvana’s Nevermind, the alternative rock atom splitter that redefined the meaning of revolution so long ago.

The youngest of Nirvana and last to join, the all-black clad Grohl remains sprightly and animated at 42 years old. He finishes Novoselic’s sentences and chills almost supine in his chair, his Virginia hardcore punk roots having long mellowed into Southern California cool. At 6’7, Novoselic speaks with the towering and clipped precision of a law student. On matters of Kurt Cobain, the trio defer to him—understandably, considering the two were best friends prior to Nirvana. The only one with a crystalline remembrance of the Nevermind sessions, the legendary Vig (Sonic Youth, Garbage) fills in the gaps with the technical sophistication that once seemed almost alien during the slacker era. Thus, nostalgia is scarce, except when the subject turns to Cobain, the Elijah absent from the reunion—the group’s first in “X” years.

After all, Nevermind was a myth that taught a generation to no longer believe in myths. It denied the diseased Satori of “Turn on, tune in, drop out.” It’s polished production spit in the Catholic nihilism of punk rock. Kurt Cobain sustained the underground continuum while cataloguing the angst of MTV America. He inadvertently sold several million flannels through song craft. See the band’s first Geffen salvo, “Smells like Teen Spirit,” with its subversive smirk, alternative irony, and the finest melodies since The Beatles.

“Smells Like Teen Spirit” turned “grunge” into a verb. It made Sunset Strip metal seem haunted by haggard poofy-haired ghosts. The postcards from the latest lost generation were stamped from Seattle; Pearl Jam, Soundgarden, and Alice in Chains all followed Nirvana’s lead, but none could match their magnetism. For left of center souls, Nevermind offered an archetype of slashing alienation and eye-rolling cool.

Naturally, Cobain’s name isn’t far from everyone lips. The man did write Nevermind, you know.

Looking back 20 years later, what memories strike you the most about the recording process of Nevermind?

Dave Grohl: : Krist and I don’t remember much about the making of Nevermind.

Krist Novoselic: I don’t remember anything.

Grohl: Butch remembers everything. To me, it’s more of a personal landmark. My life was split in two by Nevermind. I don’t remember the making of it, nor the day that it came out. But it caused a profound change in my life.

Novoselic: At the time, it didn’t seem like that much was changing. We were just inside the rental van that we had on tour. More people started coming to gigs, and slowly the band’s name took on a whole new meaning. But in our own little world, things stayed the same for a while.

What do you make of the 20th anniversary celebrations surrounding the re-release?

Novoselic: It’s nice. Nirvana came from a lot of places. There were other bands that broke ground for us. Jane’s Addiction and Faith No More had alternative rock hits on the radio. The Sunset Strip sound and hair rock thing had played its course out. We helped bring in a new wave of rock, a new wave of punk rock, or at least that sensibility.

Nevermind is an accessible record. Those are pop songs with a lot of melody. The production was top notch and people were ready for it.

Krist, you’ve previously called it a rite of passage record. Would you agree, Dave?

Grohl:I think so. I was so young when we did it. 22. A fucking kid. Honestly, the one joy in my life was playing in the band. I had no stability or security. I just had Nirvana. So when we came down to Sound City to make the record, I didn’t know what to expect or what was going to happen. I just wanted it to be good.

At the time, we just wanted to be one of those bands that played the Palladium and could eat food without pawning our gear.

Novoselic: You can’t forget what an artist Kurt Cobain was. He would draw, he would do sculpture, and he would write songs. He was really gifted. On Twitter, or in the street, or from fan mail, I receive notes from people for whom Nirvana changed their life. For me, Flipper and Black Flag had done that. So when someone tells me that, I chalk one up for Kurt.

You guys came from the punk rock tradition and there were accusations about selling about at the time. How did that make you feel?

Grohl: I never got it.

Novoselic: I got it a little bit, but you have to remember how doctrinaire punk rock was. When I got into punk, there were people burning Led Zeppelin and Black Sabbath records because those were false idols and the new god was punk. And even then, I was like, ‘no, this is good music.’

Whenever we did interviews, we would promote a lot of underground bands like Dinosaur Jr. We did because we loved them, but also to inoculate ourselves from criticism. ‘Yeah, we’re on major label and we’re in the media, but we’re…

Grohl:…”Shouting out the Melvins.”…I never thought that anyone could accuse the band of selling out creatively.

Novoselic: Sub Pop commissions. Professional fees, and then we spent it on the record. We were broke.

Grohl:The first thing that happened when I joined Nirvana was that I got sued by a punk rock guy.

What were you sued for?

Grohl: I can’t talk about it publicly, or I’ll get sued again. Some famous old punk rocker dude sued me right out the gate. It was my introduction to the music industry. I was like if the punk rock guy is suing me, then everyone’s fucked.

Novoselic: That’s what happened. There were a string of lawsuits, even after Kurt had died and Nirvana had ended. All kinds of bullshit.

Do you feel like the notion of selling out still exists?

Grohl: I don’t believe in guilty pleasures. If you want to make music, you should make music. You can’t judge someone else’s practice or music, if you’re there to do your own thing.

I didn’t start playing music to make millions of dollars or sign autographs. I did it because I loved listening to the Beatles and had a fucking guitar in the house. It’s still the foundation of what I do. The Foo Fighters is basically me making music with my friends and hoping people get off on it. People should be free to do whatever they want to do musically, without fear of selling out.

Novoselic: Pavement made great records and they were staunchly independent. Those philosophical arguments about independent or not, never come into my head. It’s like, ‘do they rock?’

Grohl: It’s fun to have this conversation with Pat Smear because he was in one of the first gnarly punk rock bands in Los Angeles. They were just crazy people who worshipped Alice Cooper, Bowie and Iggy Popp and were taking as many drugs as they could the whole entire time. You think it mattered what record label they were putting it out on? Fuck no, they wanted money for coke. Ask the old punks what they think about that bullshit.

Do you remember what the mood was like when you were out here recording the album? Were you guys holed up in the studio all hours of the night?

Butch Vig: You were in the studio nine to ten hours a day. You’d come in early afternoon, record, take a dinner break, record at night and then split around 9 or 10. I’d stay around and tinker with stuff for a couple hours.

The band was super focused. When we went into rehearsals in North Hollywood, there was no slacker ethic. I was amazed at how tight they sounded. I didn’t have re-arrange the songs. Some things we’d tighten up or shorten for a couple bars, but that was it.

Were there fights in the studio?

Vig: There was no drama.

Vig: Some are first takes. There were only two songs that we struggled to get right: “Lithium” and “Something in the Way.” “Smells like Teen Spirit” was done on the second take. It went fast. Kurt didn’t have a lot of patience. He wanted to get things done in a couple takes or he’d quickly lose interest.

Vig: That was the hardest thing. You had to deal with Kurt’s mood swings. He could be totally engaged, funny, witty, and focused. But sometimes, a switch would go off, and he’d want to be alone in the corner, not really communicating. After an hour or two, he’d just snap out of it. We just learned to give him his space when he went into a black hole, but we had no idea when that was going to be.

Do you ever think what direction Nirvana would have gone if Kurt hadn’t died?

Novoselic: Novoselic: You can’t downplay what happened at the end, so that’s a really hard question to answer. It’s just too monumental.