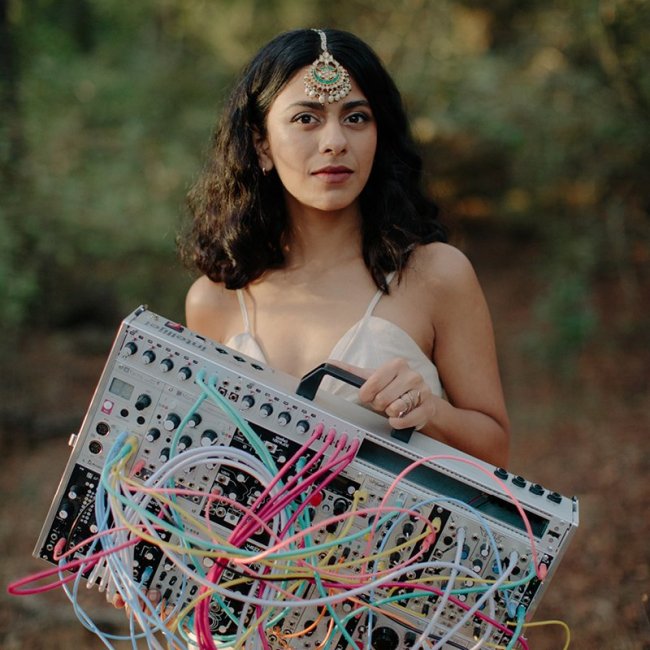 Please support our efforts to give you the best writing about the world’s best music by subscribing to Passion of the Weiss on Patreon.

With sweeping electronic swooshes and drones, Indian-American composer Arushi Jain makes Indian classical music with modular synths. From an upcoming album on the always essential label Leaving Records, “My People Have Deep Roots,” sees Jain beautifully harmonizing and forming melodies with her voice with and around an enveloping, always slightly morphing, deep drone from a modular synth. Like the slow, evolving, meditative, quiet synth compositions of people like Eliane Radigue, the best parts of Jain’s music, the parts when it really starts to hit, are when you get lost in the immersiveness, and the smallest change of the sonic scenery feels like a huge revelation. Towards the end of this track, Jain hits a pretty high note, and the reverb on her voice and the drone from the modular synth make it sound like birds are singing in the background in accompaniment.

What the world needs now is bubblegum pop Jersey club tracks, and Cookie Kawaii has delivered that gift to us. As seen here and on her viral hit last year, “Vibe (If I Back it Up),” Kawaii specializes in two minute, perfectly encapsulated, short, and sweet infectious pop grooves. Soothing ambient synths warm the background while Kawaii glides above the beat, singing simple, but effective and memorable earworm lyrics. It’s music that’s as suitable for dancing your ass off as it is for just relaxing.

Detroit minimal techno master Terrence Dixon, whether under his own name, or as his alias, Population One, has a fascination with shimmering bells. From 2017’s “The Test of Time,” to 1995’s “Minimalism,” whether at the center of the track or off to the periphery of it, Dixon returns to sounds that recall a shimmering, celestial bell, ringing through muck and grime. On “Star Garden,” it returns, front and center. Propelled forward with a pulsating bass line buried under a filter, and a subliminal, foreboding, wave of bass synths. The shimmering bell sounds like fluorescent lights eerily flickering off and on in an otherwise pitch black room – or like minimal techno trying to break free into acid house, the drums swapped with gamelan bells. Doesn’t that sound nice?

Chicago native Hieroglyphic Being practices truth in advertising, and you gotta respect him for it. Beat Non Stop Vol.1 is  eight tracks of non-stop metallic techno and acid house beats, and that’s about it. Hieroglyphic Being is hyper prolific, putting out as many as five projects per month on Bandcamp, most of which fall somewhere between acid house and techno, with some ambient, industrial, and noise experimentation and maybe even a little jazzy breakbeat type stuff thrown in. But something about the tracks on here, and Hieroglyphic Being’s commitment to the concept of the project, to just being mostly straight drum machine beats, with some acid-ey bassy synths and some sound effects added in every so often, is really cool. Like watching that one Clara Rockmore video where she’s letting her soul out on a theremin, or that one Jeff Mills video where he’s just hunched down, rocking the shit out of a drum machine, this record is just listening to someone who’s mastered their instrument of choice, and you just have to wonder, how the hell do they get so much soul out of a machine?

There comes a time in every music nerd’s life when they have to look inside themselves and ask themselves if it is indeed time for jazz? If their ears have been trained, and their heart and soul is true, the answer will come to them from on high, yes, yes, it is time for jazz. I’m glad North Carolina’s Dirty Bird heard that voice and not only decided to listen to more jazz, but to make this album as well. Much more jazz from the U.K. broken beat and Detroit house traditions than Blue Note Records, Dirty Bird makes mellow, vibey, jazz-electronica with rolling smooth drum grooves, understated minor and seventh chords, and sexy whispering vocals, occasionally bringing in elements of funk and afrobeat to tighten things up. If you are currently struggling with whether or not it’s time for you to start listening to more jazz, this is your sign. Yes, yes it is time for you to listen to more jazz.

At the beginning of last year L.A. based composer Green-House put out Six Songs for Invisible Gardens, a very wholesome and sweet ambient mood record meant to soothe the souls of plants and the humans that take care of them, but for me, the album became a nice, comforting sonic space to go to once March came. Now Green-House is back with a full length debut. The mellowness, space, and blissed out nature loving ambient synth soundscapes inspired by Mort Garson and Hiroshi Yoshimura are here, like on Six Songs, but Music for Living Spaces takes those moods and modes, adds a little sprinkle of jazz structure and composition, and molds them into complete pieces. Listen closely and you might hear a little Bill Evans-like phrasing with the keys, a little sparkle of boogie-jazz era Herbie Hancock and George Duke in the synths, and a little of Alice Coltrane’s spirituality in the voices and background accompaniment to go along with the mellow wholesomeness of the ambient-jazziness of this record.