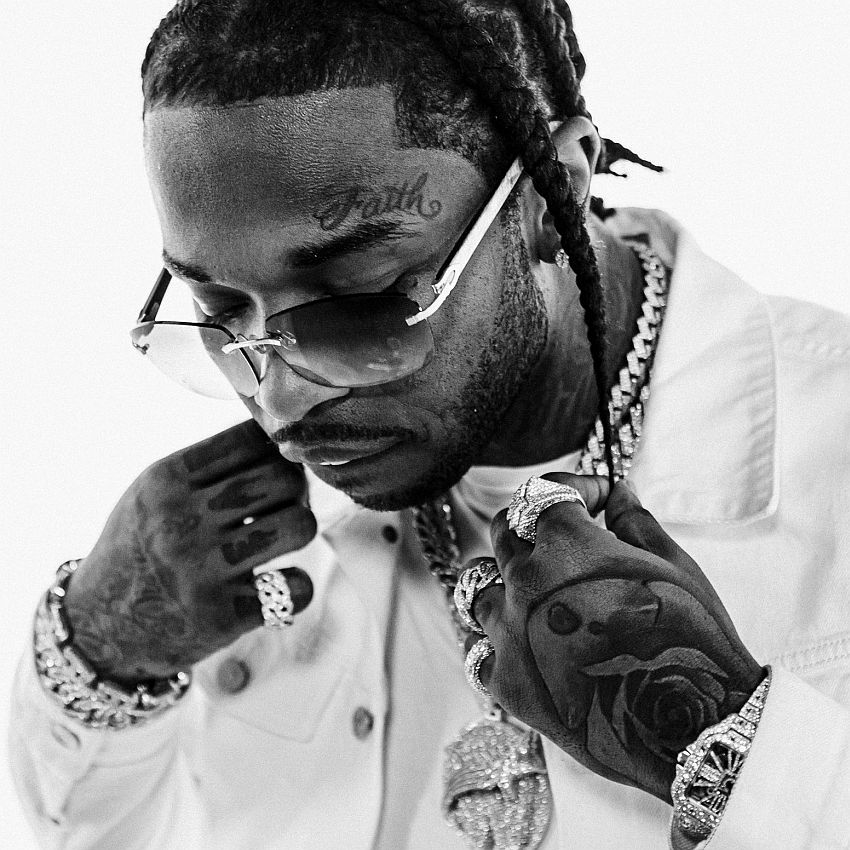 No one knew Pop Smoke could sing. He even jokes about it on “Mood Swings,” but there wasn’t much about his earlier music that suggested a singer. His posthumous album, July’s Shoot for the Stars Aim for the Moon, mostly found him trying new things. But what particularly stood out from the rest of his tragically abbreviated body of work was a five-track late album run from “Enjoy Yourself” to “Diana,” where he crooned a handful of love songs with influences cribbed straight from late 90s and early 00s R&B slow jams. It marked an unexpected turn from a rapper whose music lived and thrived within specific confines. Pop laced drill’s nihilistic roots with an irrepressible joy, making party music in the face of violence that would become the broader outlook of Brooklyn drill. On Shoot for the Stars, he strays from the lane, leaving questions about where his music could’ve gone next.

With posthumous albums, it can be hard to tell where they fall between earnest creative tribute and cash grab. New directions take on strange optics when you aren’t sure if they are true to what the artist wanted to do. His earlier Meet the Woo mixtapes were crystal clear in their vision to capture the sound of his block. His music was inspired by the swerving 808s and super-charged snares of UK drill, itself a refraction of Chicago’s original, but what you heard most was that voice. He had a baritone in the vein of 50 Cent or DMX and the unmistakable confidence of someone telling you that they were from New York. It was like listening to gravitational pull, with Brooklyn at his world’s center.

There was such a strong sense of identity in Pop Smoke’s earlier music that anything new almost feels like a betrayal of what came before. Love songs, though, were something that Pop Smoke wanted to do, and it feels assertive when he rips off five straight on Shoot for the Stars. There’s a lineage of artists that have attempted this tough guy-to-sweetheart crossover, from drill’s Chicago founding fathers in Chicago to 50 Cent. You don’t have to look further than 50’s discography to see that the pivot to tough-guy love balladry can be fraught with pitfalls, but of all the directions that Shoot for the Stars hints at for Pop Smoke, it’s profoundly devastating that we won’t get to hear his fully realized version of a “21 Questions,” or at least his full-length Thot Breaker.

For someone doing this for the first time, Pop Smoke navigated the R&B lane with ease. He leaned towards Bush-era slow jams with pop-infused slickness, singing over samples of Ginuwine’s “Differences” and Playa’s “Cheers 2 U.” In this sense, he’s something like a modern-day Fabolous, crossing radio-friendly R&B hooks with his own blunt street rap. This is music that sounds just as easy coming from the AirPods of someone who never ventures east of Williamsburg as it does from a phone speaker on a stoop in Brownsville.

His collaboration with Bronx native Lil Tjay, “Mood Swings” seems to be the one that people embraced most from Shoot for the Stars. That one finds him crooning over softer production than we’re used to, although the lyrics are more lascivious than your usual love song fare. It’s the track immediately after, “Something Special,” that really does the best job of intertwining his romantic side with his street sensibilities. Pop offers his own take on Tamia’s “So Into You,” a song famously sampled by Fab himself, and you never would’ve guessed that someone with a rapping voice in the cobwebbed cellar of the vocal register could also sound this smooth. Pop Smoke could be tender, even a little romantic, and it still authentically felt like him.

That stretch was one of the few moments on Shoot for the Stars where authenticity didn’t come into question. For the most part, the album’s production feels algorithmic and designed for mass appeal. British drill producer 808Melo, who was the primary beatmaker on the Meet the Woo tapes, only appears on a half-dozen of Shoot for the Stars’ tracks. Before his death, Pop Smoke was making a case that regionalism and mass appeal didn’t have to be mutually exclusive categories, but there’s a big-budget gloss on this album that separates it from his roots. Industry heavyweights like Lil Baby and DaBaby never felt like a part of the world that he lived in.

There isn’t anyone else that sounds like Pop Smoke today, but with a dozen-plus features and a clear polish for radio, this album doesn’t always sound like Pop Smoke, either. Every song on Shoot for the Stars’ tracklist charted on the Billboard Hot 100, but in the context of his legacy, they feel like B-sides to his myth. The tragedy is that he wasn’t able to do the myth-making himself.

Listening to rap music means becoming too familiar with tragedy. Brooklyn rapper Rowdy Rebel contributed his verse to Shoot for the Stars over a jail phone — he remains incarcerated along with his GS9 labelmate Bobby Shmurda — and it’s haunting that one of the best collaborations on the album features a dead rapper and a jailed one. Pop Smoke was killed in a home invasion in February, and we were still processing the grief when 24-year-old Sacramento rapper Bris was shot dead in June. This year has already seen the posthumous release of Bankroll Fresh’s In Bank We Trust and Juice WRLD’s Legends Never Die as well as Drakeo the Ruler’s landmark prison album, Thank You for Using GTL. There’s so much talent that will never get to have its moment, and so much we’ll never get to find out about what their music could’ve become over time.

Shoot for the Stars falls somewhere between Pop Smoke’s interest in organic growth and the direction that outside influences nudged him towards. We’re left to wonder what his version of the album would’ve looked like, or where future incarnations of his music would’ve gone. It’s probably asking too much of a posthumous album to be everything that we wanted; the whole point is that we still want more.