Record Store Day is almost here. To mark its approach, Fourculture is spotlighting the unique culture at three remarkable independent record stores, the plans each has for Record Store Day on April 19, 2014, and the music that brought us all together.

This Saturday is the seventh annual Record Store Day (RSD) – a day dedicated to celebrating the unique culture of independent record stores and the music they work so tirelessly to bring us.  From an idea hatched during a 2007 record-store owners’ meeting, RSD has become a worldwide celebration featuring exclusive, special edition vinyl and CD releases, in-store appearances, and more. As befits a day created to fête the spirit of individualism, each participating retailer throws its own RSD celebration complete with events, entertainment and those special edition offerings that are reflective of its store culture and community.

Record Store Day has been enthusiastically embraced by the recording industry, along with independent record stores and their customers. Many artists create special edition vinyl and CD releases for RSD, as well as make special-appearances at participating stores for meet-and-greets, in-store performances, autograph sessions, and guest DJ spots. This support helped RSD grow into an international event in just seven years. During the first Record Store Day in 2008, there were 10 special edition releases available at the 300 stores that participated in the US and Great Britain.  This Saturday there will be more than 500 exclusive RSD releases available worldwide; with official participating stores on every continent, but Antarctica.

When discussing the unique culture that surrounds independent record stores, Houston’s own Cactus Music is the brick and mortar embodiment of the indie record store ideals.  Cactus Music has been an integral part of the Houston indie music and arts community for over 30 years; an arts scene considered so dynamic it was cited among the reasons Forbes named Houston “America’s Coolest City” and the “Best City in America.” And as the oldest and largest independent music store in Houston, Cactus is considered by many to be the flagship of the city’s local music scene. Not only does Cactus have the deepest vinyl and CD inventory of any independent music store in the city, but it has an overflowing in-store performance calendar that regularly features local, regional and national acts – including CHVRCHES, Cage the Elephant, Monte Pittman, The Tontons, Los Lonely Boys, Girl in a Coma and Wild Moccasins, to name just a few. And to top it all off, Cactus serves ice-cold, complementary beer at all in-store performances, with proper ID of course.

Quinn Bishop, an owner of Cactus Music, is an invaluable and knowledgeable source about all things music in Houston. Recently, I spoke with Quinn about the origin and purpose of RSD; what Cactus has scheduled for this year’s RSD celebration; and his thoughts about the exclusive vinyl releases for RSD 2014.

When did Cactus Music start participating in Record Store Day?

We participated from the very onset. Record stores can be a real den of cynicism and general suspicious types. And where we were an early adopter of RSD, during the first couple years some other Houston store owners were ambivalent about it. But my thought was always, “This is really cool.  Someone is trying to put together a day that celebrates record store culture and bring people to my store. Why wouldn’t I participate in that?”

I remember the first RSD was odd because there were just a handful of releases.  I was pleasantly surprised when we opened the doors that morning to see around 20 people lined up outside the store waiting to buy these items.  Then the next year, there were 40 or so people waiting outside when we opened.  And the past 3 years we have had 500 people lined up outside when we open in the morning.  We don’t open early and it is first come first served for the limited items because that seems like the only fair way to do it. 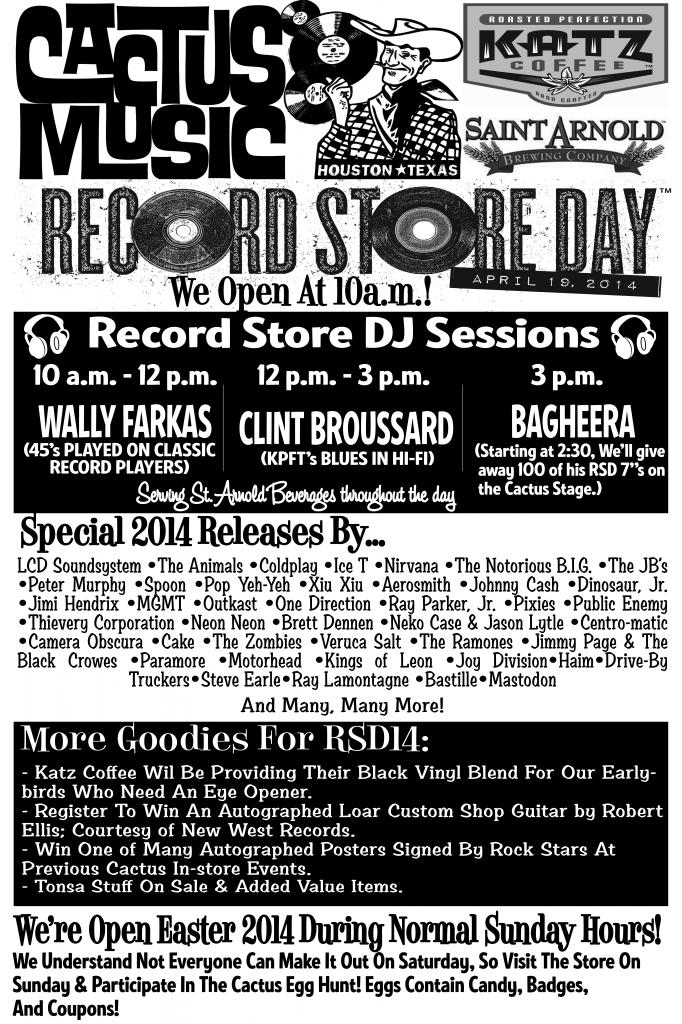 When you first participated in RSD, did you see it growing so big, so fast?

No. It was such a curiosity in the beginning; it seemed like a quaint, interesting, kind of kooky idea. But by the third year it was like, “Whoa, this is for real.” RSD at Cactus grew by 30-40% for the first four or five years.  In fact, last year was the first time we started to hit the ceiling in terms of growth because, when doing a business volume equal to 10 Saturdays rolled into one, you just hit critical mass.  RSD is already our highest volume day of the year, by double.  I mean, how much larger can you grow it?  The store is pretty much at capacity all day.

How do you decide what exclusive RSD releases to order and how are the available pieces allocated?

There are three types of releases on RSD:  Limited edition items that are produced just for RSD and are truly limited in nature. You get it on that day or you don’t get it.  Then there are “windowed” releases available first to RSD participating stores, but that will eventually be made available to everybody in the future.  This type of release gives indie record stores a chance to sell these items first.  Then there are limited run/regionally focused releases.  For instance, if a big name band is doing an in-store on RSD and also has an exclusive release vinyl limited to 1,000 pieces, then pretty much all of that release is going to go to the in-store event.

Quantities of RSD releases are limited. Stores do not receive every item they order and Gulf Coast music fans know that if their favorite band has a limited edition piece, their best odds of getting that piece are here at Cactus Music regardless of genre.  So even when I don’t really know what a release is, I will still be sure to order at least one.  We always order as much as we think we can sell – although orders are subject to allocation.  Every year, after I place the order with a couple of the big vendors like Warner, Atlantic or Universal, it seems like my next call is to the credit manager asking for special consideration because our order blew through the top of our credit ceiling. [laughs]

What release do you think will be the hottest seller this year?

I think one of the home run pieces this year is Tame Impala’s “Live” LP.  A band known for radically reengineering how they perform their material live – is putting out a live, special edition vinyl, limited to 5,000 pieces. [laughs]  Also there is a One Direction 7” vinyl, limited edition release of “Midnight Memories.”  While some record store owners or employees might not think that is cool, to me whenever an artist that has 20 million Twitter followers tells them to go to record stores, I think it’s a good thing. I am all for that.

What are the RSD releases you are personally most excited about?

I just think it’s really exciting when bands put out new music.  So this year I’m excited about the Tame Impala LP, as I’m a huge fan.  I’m also real excited about the Dave & Phil 10” vinyl; the Devo, “Live At Max’s Kansas City” 12″ vinyl; and the 12” vinyl from The Pogues with Joe Strummer.

As a record store owner, do you find there is tension between putting the focus of RSD on independent record store culture vs. putting it on the artists and their exclusive RSD releases?

I really feel that if big artists are releasing records on RSD, and that brings their fans out to record stores, then that is obviously part of the story.  But the story is kind of that the record store is a destination.  Every year we have people come into the store for the first time on RSD.  Some drove in from Beaumont or Nederland and others from one of Houston’s bedroom communities; but in every case, Record Store Day is what brought them in.  So really, the two things are very closely linked and working towards the same goal.

How will Cactus Music celebrate RSD?

This year, we have three DJ sessions that will provide an exciting soundtrack for our celebration of record store culture. All three DJ’s are Houstonians: Wally Farkas is a musician and independent record label owner who will spin 45’s on his collection of classic 7″ record players; Clint Broussard is a local on-air personality and host of KPFT’s ‘Blues in Hi-Fi’ radio show; and Bagheera, the brilliant DJ/musician with his own exclusive RSD release.

In addition, our customers can register to win a Loar Custom Shop Guitar autographed by Robert Ellis; can win one of Bagheera’s RSD release or one of many autographed posters signed by some of the artists from previous Cactus in-store events; and Katz Coffee will be providing their Black Vinyl Blend to our early-bird customers.

Drake Has Begun Working On His Next Album

Buddie Of Dem Franchize Boyz Passes Away After Cancer Battle