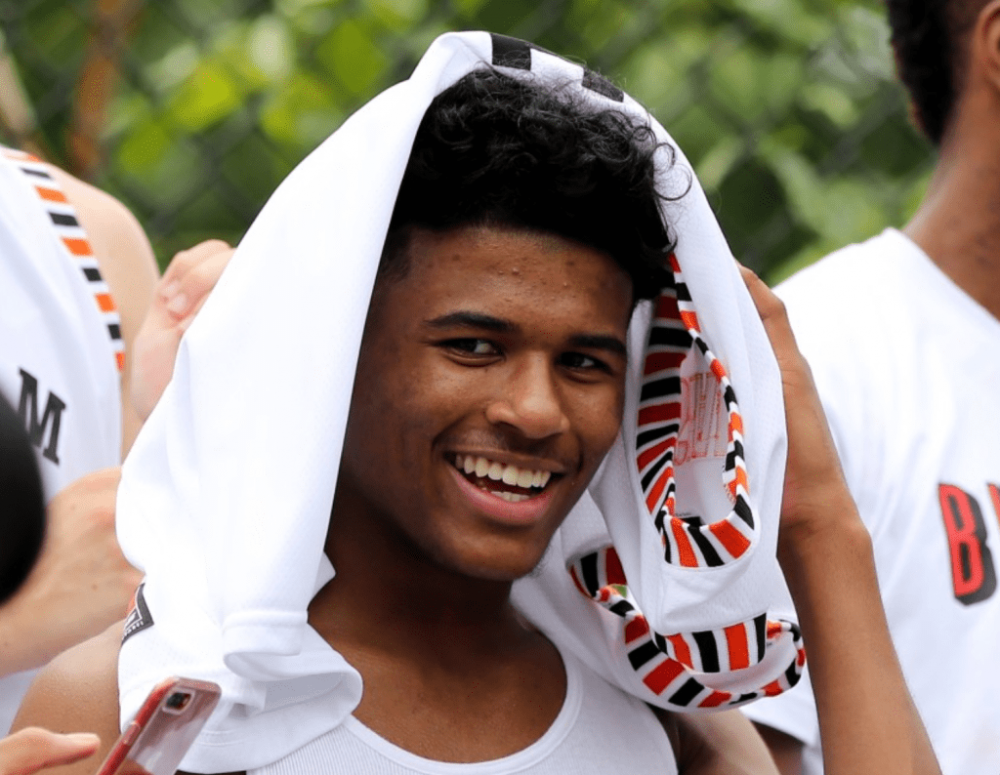 Please support completely independent journalism by subscribing to Passion of the Weiss on Patreon.

Gerald Fitzgerald shoots better than Gonzaga in the backcourt.

If you’re as fanatical about the game of basketball as myself, you’ve probably spent far too much time pondering the development of former college ball stars like Admiral Scholfield, Tre Jones, and James Young than you’d like to admit. Will they ever present enough value to crack a real NBA rotation, or will they languish away in relative obscurity playing in a league run by Manny Pacquiao? Well now may be many of those players’ make-or-break moments, as the NBA G-League bubble season just tipped off Wednesday at ESPN’s Wide World of Sports Complex just outside of Orlando, Florida.

18 teams are slated to participate, including 17 G-League teams and the league’s inaugural G-league Ignite team, filled with players who chose to bypass the NCAA’s ponzi scheme. While the G-League Ignite team is without a doubt the most enticing team with respect to prospects, there are still a number of interesting players spread around the other rosters in the bubble. Between the ones with former hype and current hype, some of these games should draw interest from the typical League Pass viewers. And the bubble environment itself may even lead to some storylines worth following, like when Danuel House’s wife found out he was cheating on her because of COVID protocols. Here are the 5 bubble teams I’m most excited to watch:

Buzz is already swarming the Charlotte Hornets, with hype amassing around their young core headlined by the prodigal son, LaMelo Ball, who is about to earn the best rapper in the NBA a much bigger contract than he deserves.

Yet, another cast of plausible recipients for Melo’s miraculousing passes will be auditioning for next season’s roster through their G-league affiliate. Did you know the NBA G league holds a draft for some of its top unsigned prospects? And in their most recent draft, the Greensboro Swarm selected Admiral Scholfied with the #1 overall pick. Many college basketball fans may remember him from his days at Tennessee playing alongside the Boston Celtics’ resident Adebayo-stopper, Grant Williams. The Admiral was originally drafted in 2019 in the second round by the Washington Wizards and was most recently waived by the Oklahoma City Thunder following preseason. He will likely be joined on the wing by a McDaniel, either Jalen or Jaden KJ (not brothers).

Another interesting prospect-to-watch will be Grant Riller, the high IQ mid-major star that shot up the mock draft boards of many NBA Draft Twitter nerds. He will be either playing the two-guard or alternating initiating the offense with University of Detroit standout and former Sacramento King Ray McCallum. Their pick and roll actions could be particularly fun because the team will also have some chemistry built into their frontcourt through the pairing of Duke teammates Vernon Carey and Javin DeLaurier.

Perhaps it will be calming to Knicks fans to hear, on top of potentially having a playoff team this season, the Knicks still have some other talented, young prospects developing their skill set in the G-League. Most notably, Ignas “Iggy” Brazdikies remains the team’s most fascinating G-League prospect coming off of an outstanding 4-game showing at the last Vegas Summer League. He should have ample volume given Dennis Smith Jr. is no longer with the team. Oregon’s Louis King is another interesting prospect who went undrafted despite putting up solid numbers in college as a freshman. Seton Hall’s Myles Powell was also known for being a high volume scorer in college, and will be looking to represent his tri-state roots through New York’s G League team.

Players like Theo Pinson, Skal Labissiere, and James Young will also be intriguing to watch. Their level of involvement with the team could ultimately determine their success as these once highly regarded NBA prospects will be looking to take advantage of this unique opportunity to present their value to NBA scouts.

If you’re a Knicks fan wondering why in the world would your FO give up any young player and draft assets for the dubious patellas of Derrick Rose, I don’t have an answer for you. But perhaps you will get to take comfort in watching these (somewhat) young players demonstrate their potential, unfettered and unadulterated.

Like a typical Spurs rosters, most players on their G-League team may not necessarily pop out at first glance. However, this roster is built like a team prepared to move the ball around on offense, hit open shots, and play cohesive team defense.

The Spurs backcourt will be led by a pair of floor generals who were known winners at the collegiate level in Tre Jones and London Perrentas. At the two-guard, Quindarry Weatherspoon (one of the most elite names in the bubble) and Khyri Thomas are both mature players with some NBA experience whose scoring ability should keep defenses honest.

Along with Tre, the Spurs coaching staff will be deeply evaluating the talents of Luka Samanic, who they drafted 19th overall in 2019. Another strong prospect joining the team will be Sacramento Kings 2nd round pick Robert Woodard, who was drafted by the Grizzlies before he was traded for Jaren Jackson’s college teammate, Xavier Tillman.

Yet the player on this team I’m most interested in watching will be David Kramer, whose name makes it sound like he should be wearing khakis at a car rental desk. Kramer has nearly spent his entire career playing overseas, so it is only reasonable to be completely unfamiliar with his game. To help everyone get familiar, let me start by pointing you here, where you as well can fall in love with Kramer’s irrational confidence and bright orange gym shoes:

He does more than hold his own against solid NBA pros here. At times, he is fully in his bag, cooking hibachi like a street food vendor serving up marinated thin meats on a flat grill. And judging by a few of the early comments on this video, there are clearly several others who would share my excitement about his fit on this G-League roster.

If you clicked on this article, you’re undoubtedly familiar with ‘The Process,’ and you remember every casualty and asset gathered and dumped to create the Sixers current roster. So you have probably wondered at times, where in the world is Zhaire Smith, the athletic Texas Tech wing the Sixers traded for the sweet shooting, long-armed bandit and Philly native, Mikal Bridges. Your answer lies here. Zhaire Smith will be competing for playing time on a fairly stacked Memphis Hustle roster, featuring  Milwaukee Bucks 2nd round draft pick Sam Merrill, Dallas Mavericks 2nd round pick Tyrell Terry, and Freddie Gillespie, 2nd overall pick in the aforementioned fabled G-League draft. This team also features Jontay Porter, a 6’10 forward-center and the 21 year old brother of Denver Nuggets rising star, Michael Porter Jr.

Two former Gonzaga standouts round out the players I’m excited to see on this team. Killian Tillie, whom many believed was a first round draft pick before his injury, and David Stockton, son of John Stockton, who bounced around NBA rosters for 4 seasons and has represented the US at a handful of FIBA Qualifying tournaments. In many ways, this roster looks like a team the US would field in a FIBA U20 tournament in 2016. Having been coached by Mark Few and Jeff Van Gundy, I’m not so much interested in Stockton as a prospect at the age of 29. Rather, I see Stockton as a grounding veteran presence that could unlock Tillie’s upside, as well as the other young guys on the roster.

I don’t know where to begin, so I’ll just go down the roster by age. The youngest players on the team are inherently the most interesting, and perhaps the stars of the entire bubble. Between Daishen Nix (think: even thicker Talen Horton-Tucker), Kai Sotto and Jonathan Kuminga, clocking in at 18 years old, and Jalen Green and Isaiah Todd, both 19 years of age, league talent evaluators will be incessantly ruminating over how their performance will impact their draft stock. The coaches for the Ignite should have a ball working these talented teens into lineups with more seasoned pros, and almost certainly will be expected to play all five together for significant stretches.

Of those seasoned professionals enlisted to provide an honest experience of NBA veteran presence, 13 year NBA vet and the man who still haunts Knicks-fans nightmares, Jarrett Jack, 14 year NBA vet Amir Johnson, and overseas professional, TBT superstar and Drew League OG, Bobby “Blue Bucks” Brown are by far the most intriguing and important to this roster. The three will be able to coach the young players on the floor, while also being selfless distributors since they should all be past seeking further NBA contracts. This should undoubtedly put the focus on the young talent and provide a boost to their statistical averages.

This team is built like the current Oklahoma City Thunder. And if these players meet the hype that Cade Cunningham, Jalen Suggs, and Evan Mobley have amasseded with their college play, I would be genuinely interested in watching them play a game against OKC young rotation players. But since we know that won’t happen, I’ll have to settle for them playing the OKC Blue on the 12th.

This team will inextricably link these 5 players together throughout their careers. If any two or three of them go on to become superstars and say join forces a la DWade/LeBron/Bosh, the media will inevitably point to this team as the reason.

Stalley Shares "Reflection Of Self: The Head Trip" Project