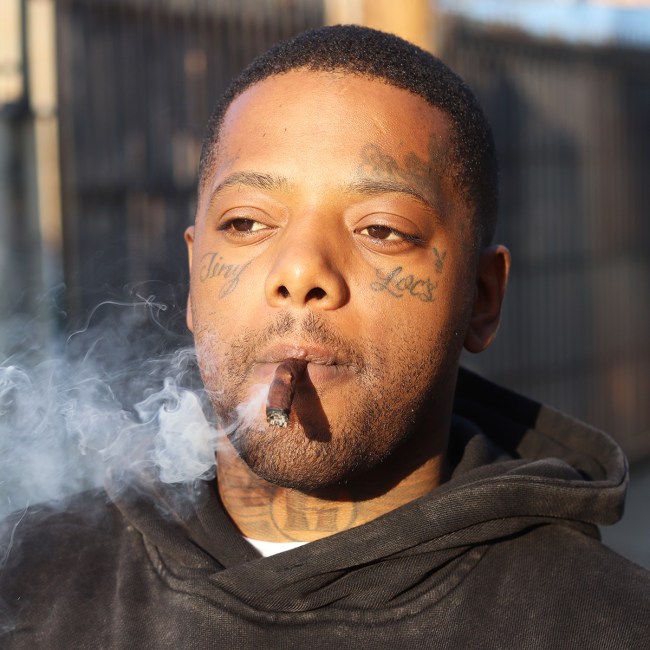 There’s a tattoo of Bugs Bunny smoking a blunt above Big Sad 1900’s left eye. It’s faded to the point of being almost unrecognizable and you can really only see the outline of the mischievous Warner Bros character, propped up on one elbow and resting on Big Sad’s brow. You see, there’s two types of tattoos on Big Sad’s body: the ones he got in jail and the ones he got outside of jail. The Bugs Bunny tattoo was given to him via pen ink and a contraband needle while he was incarcerated as a teenager, serving time for assaulting a peace officer at the youthful age of 12.

If you thought the Bugs Bunny tattoo was this young man merely paying homage to his favorite cartoon character, you’d be wrong. Big Sad 1900 is a member of the Playboy Gangster Crips, a Los Angeles County gang that originated on the Westside in the 1980s. He grew up in La Cienega Heights, the home turf of the Playboy Gangster Crips and the geographical inspiration behind Big Sad’s latest project, Gang Ties with LA producer Cypress Moreno. The 26-minute-album simulates what I imagine it would be like to get dropped off in enemy territory, forced to either hustle or shoot your way out under lean-colored skies. It’s an exercise in cool paranoia, a soundtrack to the alluring danger of always being in the mix.

Big Sad shies away from the stripped-down club anthems currently flooding the LA scene and doesn’t compare well with the mumbled, off-beat form of his other SoCal contemporaries. His golden-era fascination with gang culture is more in line with the G-Funk revival being pushed by the city’s up and coming traditionalists like Doggystyleeee or the Nate Dogg-channeling NHale.

The Playboy Gangster Crips earned the unlucky distinction of becoming the target of L.A. County’s first widespread gang injunction back in 1987. It was basically a court order that allowed the city attorney and the LAPD permission to instate special rules for areas they deemed as having gang activity, like banning certain colors of clothing and restricting who known gang members could hang out with. The boundaries of the injunction were at first broadly defined as anywhere within LA city limits, before the American Civil Liberties Union challenged the order, eventually leading a judge to reduce its scope to a few blocks and striking the so-called “no association provision.”

The injunction was also the first that put restrictions on gang members that didn’t even exist yet, listed in the court order as John or Jane Does, to be added later if deemed necessary by police. One of those John Does was the yet-to-be-born Big Sad 1900, who came of age in the late nineties and early 2000s. He was raised by both his grandparents and the state, having spent a large portion of his teenage years behind bars at Boy’s Republic in Chino Hills. He earned a high school diploma a year early at age 16 while there for attempted murder and aggravated mayhem.

These days, there’s currently more than 40 permanent injunctions on at least 70 different gangs or factions across the city of L.A. Critics of the court orders say there’s no proof it works and that it’s sole purpose is to justify racist policing tactics in black and brown areas. Big Sad 1900 hasn’t been to jail in well over a year and he hopes his music career will create some distance between himself and the police who have effectively criminalized the act of living in his own neighborhood. His mission is to do for La Cienega Heights what Nipsey Hussle did for Crenshaw, and he knows it will take time.

“I was just so interested in gangbanging that I would go onto the computer and type in different hoods,” Big Sad says. “I typed in Rollin 60’s one time and nothing but Nipsey popped up. I started listening to his music and it took me by storm. He was really talking about gang member shit that I relate too. I’d never heard anything like it. I watched Nipsey from 08’ all the way to the Grammy’s and I thought ‘if he can do it, I can do it.’”

You can hear the Nipsey influence in Big Sad 1900’s parsed, staccato flow. Each line stands on its own as if he were rattling off a list of aphorisms, only loosely connected via theme and motif. Yet, the best Nipsey songs retain this quality while painting a more complete picture when taken together. It’s the reason why Nipsey’s quotables sounded prophetic even before his death in 2019. Big Sad has his eyes on the larger picture as well. He knows this rap shit doesn’t always pop off overnight and he’s settling in for the long con, building up his record label, 1900 Records, and slowly growing a catalog that’s foundational for something greater. 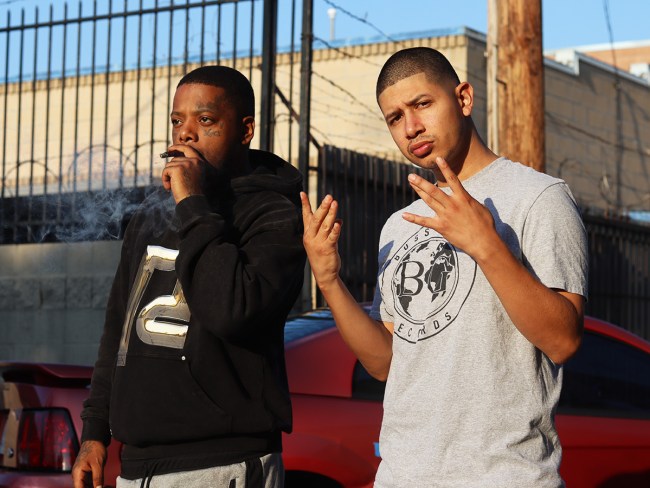 Big Sad 1900 has gained a large and sturdy following in a short amount of time. He released his first video, “No Hooks,” with frequent collaborator and close friend West LA Stevo, in January 2019. At the time he was on the run from three felony warrants and he eventually went back to jail. The time inside wasn’t enough to completely stifle his buzz, though, and since being released he’s dropped 6 projects, with features from a who’s who of New LA alumni, such as Drakeo the Ruler, Rucci, AzChike, RJmrLA and G Perico, among others.

“I have a lot of songs. I always tell people if there’s one song of mine you should listen to, it’s “Therapy,” Big Sad says. “Because then they’ll know what to expect from me.”

His two most viewed Youtube videos, “La Cienega Heights,” and the aforementioned “Therapy,” are easily his most personal tracks to date and he’s at his best when he gets into specifics. The “Therapy” video shows Big Sad and his gang hanging out in front of Joe’s Market in La Cienega Heights, sipping lean and smoking weed. He shouts out specific homies and brings us into his family dynamic. We learn his grandmother died recently and that he still can’t stomach the thought of losing his grandfather. The last 30 seconds are dedicated to a jailed friend by the name of Tiny Skull who recorded a video from jail of himself singing along to a song being played off a phone.

“We ain’t have a heater, used to warm up by the stove. Shared a room with brothers, so you know we shared clothes. I was showing up to Mt. Vernon with the pole,” says Big Sad 1900 on “Therapy.”

Big Sad has always preferred locking in full projects with a single producer as opposed to shopping for beats. He released two collab albums in 2020 with LA producers 420tiesto and Uce Lee, respectively. His third project in nearly a year dropped in August with Cypress Moreno, an LA staple who’s production credits include G Perico, Freddie Gibbs, Shoreline Mafia and 03 Greedo.

“This one is special,” Cypress Moreno said. “I think everyone can relate to Gang Ties, even the nonaffiliates. Big Sad had a list of producers he wanted to work with and my name was on there. He studied the game and I’ve never done a whole album with an artist like this.””

His work on Gang Ties is dark and menacing. The first track they recorded was “700 In My Cup,” a song-of-the-summer contender that effectively bridges the gap between New LA and the gangbanging, G-Funk era of the 90’s. Cypress Moreno has the difficult job of creating the soundscape to Big Sad’s tales of gangbanging. These are stories that Big Sad acknowledges have been told before by artists like Nipsey Hussle and Mozzy. He’s not trying to reinvent the wheel and Cypress does a good job of creating beats that sound both fresh and familiar.

“I wanted to bring people into the gang culture in LA,” Big Sad says. “Every gang member out here is sipping some lean, even though the culture really comes from Texas, a lot of people out here are sipping lean and doing perc’s, I’m just talking about everything. I don’t break into houses but that’s what people are doing out here to survive.”

Big Sad 1900 performed his first headlining show in Los Angeles at The Roxy on August 26. Cypress Moreno was there, as were special guests AzChike, Capalow and Rucci. The event felt like a long overdue celebration, with jail stints and pandemic closures having prevented Big Sad from taking the stage these past two years. The Baby Stone Guerillas, architects of LA’s dopest posse cuts since BlueBucksClan, opened the show with their first performance ever. Big Sad collaborated with members P4K, Top5ive and 5Much this month on the Pitchfork-featured track “Mainline.” It’s one of the group’s best songs to date and Big Sad figures easily into the fold with bars about his comfortability in general population and being sent to solitary confinement for attacking an enemy.

Artists outside of LA have similarly caught Big Sad’s attention. He hopes to further build his buzz in the coming months by working with rappers from all over the U.S. He currently has a girlfriend in Washington State and spends part of his time in Seattle when he’s not hunkered down in Southern California.

The La Cienega Heights area that Big Sad 1900 knew growing up has slowly transformed into something he can hardly recognize. His grandfather recently moved into an old folks home and the house that he lived at, the one Big Sad grew up in, will be leased or sold before the end of the year. While gang injunctions still exist elsewhere in the city, the one that loomed over La Cienega Heights is officially gone and gentrification has arrived. Today, Big Sad lives in Downtown LA, when he isn’t in Seattle visiting his girlfriend. Yet, he never strays too far from the neighborhood that raised him.

“A lot of people are moving out. It’s a lot different over here compared to when I was a kid,” Big Sad says. “But I’m one of the first artists that’s from La Cienega Heights that’s really talking about what I’m talking about. I’m keeping it alive.” 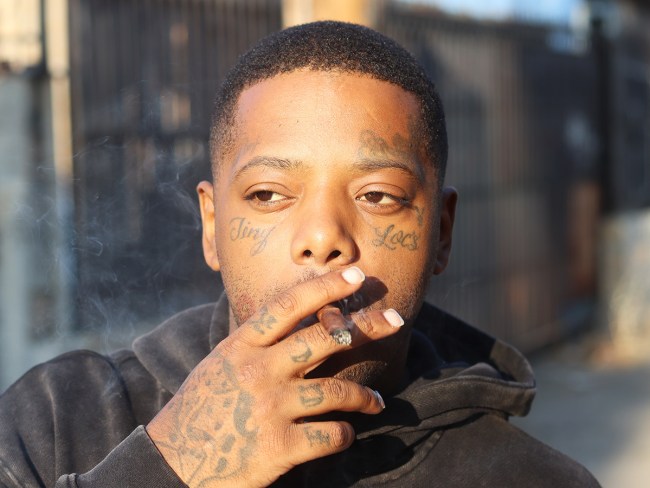 Eminem Crowns 2Pac As The Greatest Songwriter Of All Time

Ludacris Hits The Studio With Timbaland For 10th Album