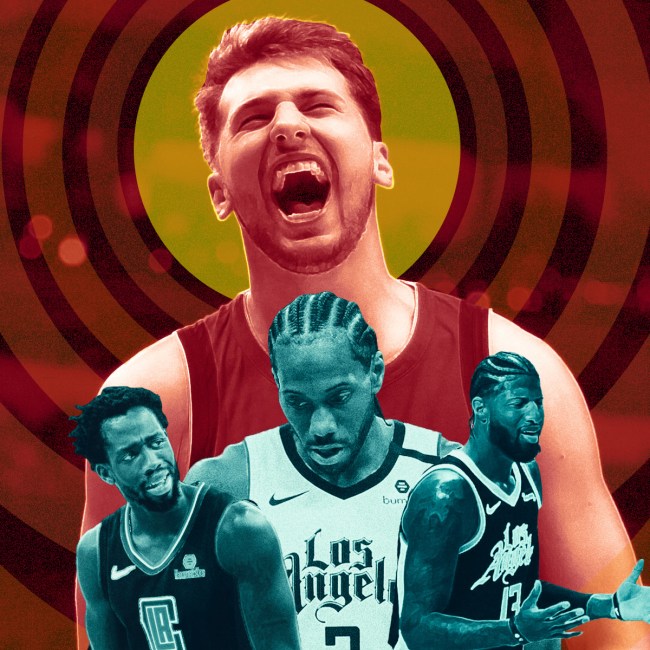 Patrick Johnson is patiently waiting for a new Ghostface song where he references Knicks fans spitting on Trae Young.

Back in October of 2012, Oscar season was gearing up and Hollywood was telling the world, “Hey, Ben Affleck — he’s that dude again,” to varying degrees of receptiveness. The NBA season was about to start and I was sitting through the trailers before Argo started screening casually talking about fantasy basketball rosters with a friend. The normal subjects emerged — teams on the come-up paired with whatever dumb, half-assed statistical Basketball-Reference analysis we were both doing before picking our fake teams in a fake draft for very little real money. This was peak metta-film school years for me, so I had to sit through my friend’s Al Pacino-in-Donnie Brasco impression as he explained:

“Ben Affleck — forgot about it. The Lakers — you’re a smart kid. You already know this. They had their time. The Clippers, see, they got the appeal, the balls of a Casey Affleck. No fugazi. The grind of a Casey Affleck. Mark my words. You get Del Negro outta there and…”

Argo would go on to win seven Academy Awards that year. The Lakers got swept in the first round. Casey Affleck was in Paranorman. The Clippers lost in the first round. Ben and the Lakers have bounced back a decade later filled with all of the relationship drama, ups-and-downs and limelight of a TMZ frontpage. Casey and the Clippers keep maneuvering in the background, occasionally getting some shine — whether it’s for evoking the tried and true Affleck family skill of afflicted and depressed man somewhere in and around the Boston area or for pushing all of the Microsoft-backed chips into the pot for a free agency haul. From Lob City to Kawhi and Paul George, nothing has really changed all that much. Little brother continues to live in the shadow of big brother and all of his accomplishments (and drama), even if big bro was sad Batman or rolled out this starting five.

For all of the money poured into a shitty rebrand filled with Old English font and San Andreas GTA maps on the baseline, for their “hey look, our new owner isn’t racist!” co-opting a Brooklyn Nets-West aesthetic and edgy “Kings of LA” billboards, the Clippers still pay rent in the Lakers’ house, literally. Watching Los Angeles’ basketball bastard children fail continues to spark the serotonin receptors in a wave of undeniable schadenfreude. This year’s Clippers hate feels particularly special though.

After giving up a 3-1 lead in the bubble’s strange and asterisk-filled playoffs, Steve Balmer sent Doc Rivers packing then essentially said, “run it back” with Ty Lue, the ultimate players’ coach and former LeBron clipboard-holder. They paid Luke Kennard $41 million to join the NBA’s most unlikeable roster and clap anytime Paul George does anything noteworthy. The Clippers flaunt the confidence of the “Not 5, not 6, not 7” Heatles with the personality of the four Hinge dates you’ve been on since the quarantine mandates started to lift. Look at Marcus Morris thinking he’s a member of the Bad Boys Pistons:

It isn’t a secret as to why the Clippers tanked the last two games of their regular season: they didn’t want to see the Lakers in the first or second round of the 2021 playoffs. The geniuses that they are, they won’t see them at all this year thanks to a chubby 22-year-old Slovenian who’s staging a Ten-Day War of his own — an efficient, targeted attack with minimal casualties focused mainly on embarrassing Patrick Beverley.

While the main focus here is on the karmic retribution of the Clippers’ dodging their city rivals for a more favorable matchup, there’s one man who has made the schadenfreude all possible: Luka Dončić. Lest we forget how close he was to sending the Clippers’ packing in his first postseason appearance, when the number two seed made it a point to target him for being what they thought was a soft, “bitch ass white boy”:

The ongoing LeBron-comps that follow Luka around every time he gets a triple-double are clearly not because of athleticism or shooting, but because of how he has controlled the pace in a LeBron-esque way for each of the Mavs’ two victories this series, meandering through screens as if in near slow motion, isolating a desperate Patrick Beverley on an island and even hitting late shot clock tear-drops over Kawhi. While it’s unlikely that the Mavericks shoot over 50% from beyond the arc for the remainder of the series, their offensive output is still replicable with Luka’s brilliant playmaking and taste for revenge. When he’s doing ridiculous shit like this, there really isn’t an answer:

I have no gripes with Kawhi Leonard outside of showcasing that he’s not the stoic leader that he and Uncle Dennis built his reputation upon. He’s just a superstar on a basketball court who doesn’t talk — not even through this series’ most basic top-of-the-key pick and rolls. At 29 years old, his injuries are degenerative enough that he’s shown he can’t be the all-world defender he once was. His 30-point first half was foiled by a team that couldn’t defend Luka or the three and was broadcast on NBA TV. Most fans couldn’t even watch Los Angeles’ other team fail in real time.

As for Paul George, there was the chance that his narrative had come full-circle — all of the hating on Playoff P hitting the side of the backboard and his and his team’s complete folding in Game 7 against the Nuggets last year could have made him a stronger, more self-aware basketball player. Nope. See, losing two straight home games to an opponent you thought would give you a better chance to advance and shooting 3-15 from three has Paul and the rest of the Clippers feeling… unconcerned.

From ESPN: “There is none,” George said when asked what the team’s level of concern is after losing the first two games at home. “It’s a competition. We got to rise to the occasion. The fact of the matter is if we don’t, we’re done for. There is no level of concern.”

More of that very unconcern from ESPN: “I’m not concerned,” Coach Ty Lue said. “We gotta win four games, and you come in on an opposing team’s floor and play, there’s no pressure on you to make shots. You just try to come in and steal a game, steal two games. But now they gotta go home and keep up the same shooting. It’s easy to go on the road and do that with no pressure. We’ll see in Game 3.”

Pressure: “You keep using that word…”

Of course, this entire article could be woefully null and void should the Clippers show some perseverance and win the next four out of five games. In the modern NBA, we’ve seen crazier comebacks in the last handful of years alone. But from the Clippers? Like a Kobe and LeBron Finals, it will truly be a tragedy if we never see the Clippers-Lakers playoff matchup we were promised featuring a sea of purple and gold for the Clippers’ “home” games. So raise your glasses to the Clippers, for being strategically sluggish, lazy, stupid and unconcerned.