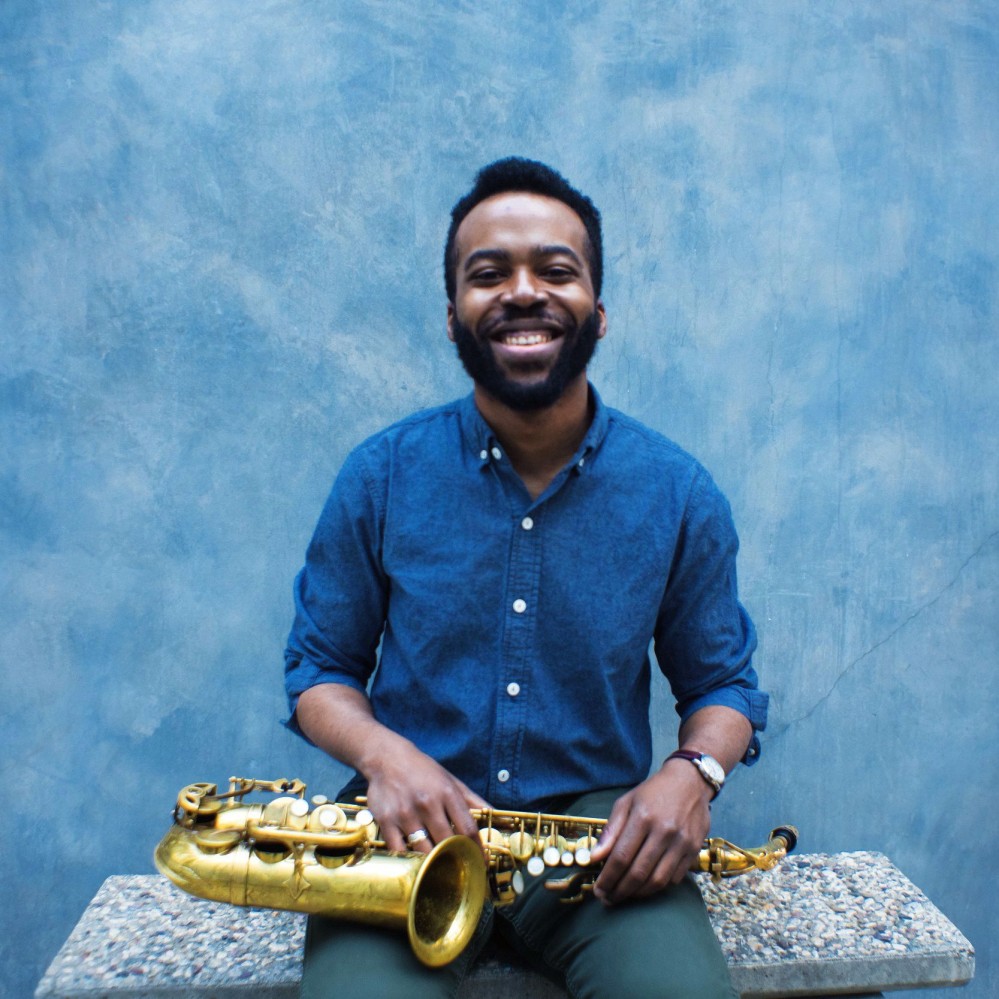 Please support the site which knows better than most that more jazz is the solution to most problems. Please subscribe to Passion of the Weiss on Patreon.

Josh Johnson’s universe is interconnected. Whether adventuring out on his own as a solo artist, like he’s done on the stellar Freedom Exercise, or playing with any number of bands and artists that call his number, Johnson is a malleable force. His resume is too long to list in full, but Johnson is a saxophonist by trade, though he plays keyboards and composes as well. He plays with L.A. luminaries like Jeff Parker, Kiefer, Makaya McCraven and Miguel Atwood-Ferguson, and is a go-to player for Leon Bridges and Dawes. He’s a bridge between L.A. and Chicago’s already connected jazz scenes thanks to players like Parker and McCraven, and like those artists, his solo music blurs, erases, and redraws the lines of jazz into something new and entirely thrilling.

Freedom Exercise is out now on the excellent Northern Spy Records, and Johnson’s compositions play with jazz fusion and psychedelic funk, never quite landing on one side, always leaving room for interpretation. He approaches the album’s players in a similar way. The band consists of Johnson, Gregory Uhlmann, Anna Butterss, and Aaron Steele, and was created throughout a number of sessions. The album is a highlight of those recordings, with Johnson and producer Paul Bryan sharpening the edges of these studio dates into a wholly unique take on jazz.

“Nerf Day” moves along with a loosely shuffled drum groove before sagging back into a half-time break, giving the song an unpredictable energy. “Eclipsing” begins with a beautiful looped horn section, which sounds indebted to minimalist composers like Steve Reich, before moving into a calming lounge jazz number accented by razor-edge guitars. “False Choice” takes post-punk as its template before moving into Pharoah Sanders-style horn runs with a bit of TV on the Radio thrown in for fun.

Throughout the LP, Johnson showcases what so many artists see in him, which is an unwillingness to compromise and a creative vision equally parts fresh and familiar. Johnson’s music is home-y without ever being comfortable, cavernous in sound but the band’s cohesion is airtight. It’s never quite at home in any world, and as such, Johnson treats a vast musical universe as his canvas. Freedom Exercise is unlike anything Josh Johnson’s ever worked on, but it’s in conversation with every album he’s graced, in spirit, intensity, and passion. — Will Schube

Can you walk me through when you began plotting this, and when you realized you had a full-length solo record on your hands?

Josh Johnson: It’s been a long time coming, but the first recordings for this record happened in March of 2018, actually. At that time, I didn’t know I was making a record yet. I had a couple new things that I was uncertain about, some of which were versions of those ideas. I played live with the other musicians that were on the record. Anyways, I had this collection of songs, I was kind of like, “I don’t really know what these are or if they work, or if this is lame,” and I got talking to Paul Bryan, who recorded the majority of the record, mixed it, and also produced it with me. He was like, “Look man, why don’t you just come in? Let’s document a few of these and let’s see what the music is.” I did that in March of 2018, just did two days at Hall Studio, and basically right after that, I got really busy with a bunch of other stuff. Right after the session, maybe a day or two later, I went to South Africa with Miguel Atwood-Ferguson. It began a string of traveling, and I didn’t touch it for a while. I revisited some of the recording later, and I was like, “I think there’s some stuff here that I’d like to work with and record around.” Then, I was touring a bit more, so I was sneaking in stuff between tours. From there, it was not quite a linear path, but over the next year, I spent time writing more music, recording more stuff, recording around what we had done all together, and I think as that happened the direction became clearer. It’s hard to say what exactly opened it up, but at a certain point I was like, “Oh, this is a vibe. This is what it’s supposed to be.”

Was it difficult coming back to it and keeping the vision of it in your head?

Josh Johnson: I think it was actually the opposite. It’s not that I was lacking vision, but a big part of the process was letting stuff develop in its own time. There’s something to be said for just knocking something out, but the space between it was helpful; it provided some clarity and some time to imagine what it was going to be like. I would sit with wherever I left it last, and I would just be listening to that, trying to hear where it was going. When I would come back to it, I would come back to it with some new ideas.

Josh Johnson: There’s a lot of room for them, and all of my collaborators are people that are very dear to me; some of my best friends and people who I have worked a lot with. I wanted there to be space for them; I wanted all of those people involved specifically because of what they do and the way that they hear and the way that they make music. Some of the things, some portion of the music might be written out or I might have played something for them, some sort of reference, and then there’s a lot where I had an idea and I trusted them to realize it in their own voice. There’s sort of a mixture – there are some tracks that have the basis of a full band, and there’s some stuff, a few things, that’s just me, and there’s one that’s me and Aaron Steele. For that one, I brought something that I had made in my home studio to Aaron’s place. I was like, “Hey man, this is kind of fucked up, but can you play drums on this? I know it doesn’t really make a lot of sense, but I really just want you to play against this, rather than play alongside me.” There are a couple tunes on the record, the one that’s called, “Bowed,” and “Punk,” which both of those I had a framework for. I set up an improvisational scenario with a few parameters and we just hit record, and part of what’s on the record is highlighting moments that happened organically in that process.

Because you play with so many people, is there a preferred mode of collaboration that you like to be incorporated into when you’re working with and for someone else?

Josh Johnson: I think it depends on the project and artist. One of the things I like about collaborating with people is it gives you insight into how somebody else hears music, or puts it together, or how they learn music, or how they develop their own ideas, and that’s always really interesting to me because there’s always something to learn from that. There’s always something. Working with other people and seeing their process, it makes me ask questions and be like, “Oh, I wonder if I would ever approach it this way?” I enjoy a lot of the different versions of collaboration that happen. Sometimes it’s starting with a completely blank slate, sometimes it involves somebody having an idea or vision of it and they’re also hoping that somebody else can help fill in the details. I enjoy it all.

I imagine working with Leon Bridges or Dawes is dramatically different than getting in the studio with Carlos Niño.

Josh Johnson: Yeah, very different. Something that I’ve realized about this record, and the process of making it, is that it has me getting back in touch with when I first got into music, when I got serious about it. I didn’t think much of it at the time but I was just involved in a bunch of different stuff. I was trying to be a jazz saxophonist, but I was also playing in a weird suburban art-rock band. Also, I was playing piano in a church and making music on my parents’ computer, so I think at some point, it was necessary and good for me to focus on one thing for a while. Despite that, I find that I feel best and most balanced when I’m involved in a bunch of different things, and that involves a bunch of different types of collaboration. I get enjoyment from both, working in a situation with Leon, working with Carlos, even though they’re completely different people, completely different approaches, but they both give me something and hopefully I can contribute something back.

When did you first start getting serious about music as a profession? Was that high school, college?

Josh Johnson: It was high school, or at least as an interest; I definitely wasn’t playing a lot in a professional setting, but I was making a lot of music with friends and things like that. That’s when I got serious, and I started piano when I was young and I loved the piano but hated lessons, which is a familiar story. I would investigate things and learn things by ear. It was high school when it just became clear to me, this is where I should be, and this is my expression.

You are in between the Chicago jazz scene and the L.A. jazz scene. I know there’s a lot of overlap, but do you see any distinctions between what the International Anthem folks are doing and what some of the L.A. folks are doing? Are there any differences, or are their worlds pretty melded at this point?

Josh Johnson: It’s hard to say; it’s hard to generalize. I’ve been in L.A. for eight years, but a lot of my musical roots are in Chicago. That’s tough to answer because I think they’re really different, but I think that there are overlapping interests or curiosities. Both places have people that are looking to make music that resonates with people, that’s seeking to connect with people through different means.

Do you view everything you work on in conversation with each other, or do you view it all as independent entities that you approach independently?

Josh Johnson: Increasingly, I feel like they’re all connected; they’re all coming from, or at least me being involved in different music, it’s all coming from the same place. There are different colors, there are different priorities in different settings, or sometimes different languages or different sonic palettes, but I think they all inform each other. I describe it as someone’s personality or something like that; there are different parts of you that come to the floor when you’re with different people. The place that someone’s music comes from doesn’t change, but the specifics of the situation change, whether that’s what instrument you’re playing or how much improvisation there is. I feel like it’s increasingly the case that the place where I’m playing music from is always the same.

Woodstock Accuses Investors Of Skating Off With $17.8M

Kevin Durant Gets A Crash Course In Mainstream Vs. Underground Radio After Requesting Freddie Gibbs

Vilde releases Flash in the Pan