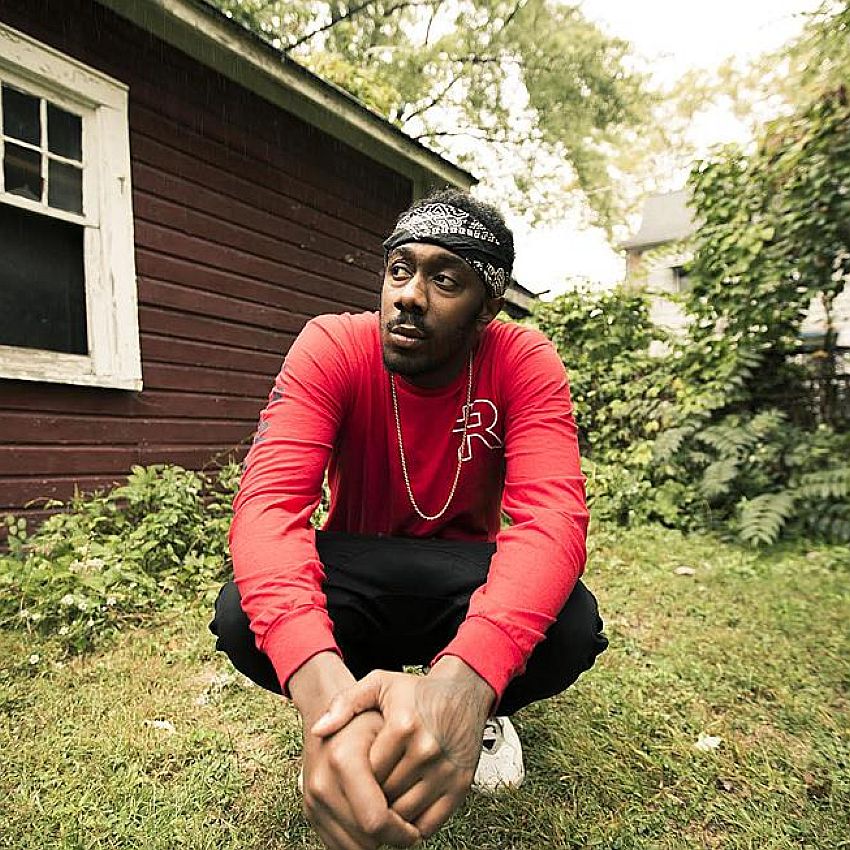 No ads, no corporate sponsorships, no capitalistic fuckery. Just the best rap music coverage. Please subscribe to Passion of the Weiss on Patreon.

There are a few things that can forever be guaranteed about Cleveland. People are gonna joke about the river catching fire, the sports teams are never gonna be good, and if they are, it won’t last long, and Kipp Stone will make excellent rap music that not enough people listen to. Granted, Stone is getting more popular than ever, but the East Cleveland native has been on the come up for a half-decade or so and is overdue for a delivery of flowers. Part of Stone’s charm is that he’s aware of how overlooked he is, but uses it to prove his skill rather than complain about his place in rap’s echelon. One of his best songs is the aptly titled “Cult Classic.” Stone plays his part, even if he should be grabbing the starring role.

His new album, HOMMÈ, might just change that. The entire record is tinged in a laugh-to-keep-from-crying desperation, but Stone always allows himself to have the last laugh, so a song like “Cheap Sangria,” an anthem dedicated to those stuck between empty wallets and good taste, comes across as aspirational while still projecting the weight of anxiety, depression, debt, loans, day jobs, and the like. Stone’s style moves from laconic sing-song flows (“Pedestal”) to a militaristic yelp that interpolates some of the playful adlibs used in Atlanta rap (“Rags 2 Riches”). Throughout the album, Stone proves his meddle in a variety of styles, never tethered to the world inhabited by Cleveland heroes like Chip tha Ripper and Kid Cudi, but always hinting towards the deep, stylish flow both MCs default to. He touches on drill, trap, and classic boom-bap, immersing himself so thoroughly that you want an album dedicated to each.

The album is out now on the excellent Closed Sessions out of Chicago, which it should be said, is one one helluva run. Stone reps his East Cleveland hood with vigor and pride, and the community he’s helped foster in the area gives hope that homegrown scenes aren’t dead yet. HOMMÈ is a rallying cry for the disaffected and disenchanted, for the ones that can’t quit because their glow up may just be around the corner. — Will Schube

Where are you working these days?

I imagine, now more than ever, it’s got to be a pretty insane place to be, huh?

Kipp Stone: Bruh, I’m telling you … I started a month before all of this stuff started happening.

How do you go about balancing a rap career that’s doing well with a day job?

Kipp Stone: It’s exhausting but it comes with the territory. I can’t really complain. I’m trying to get to the point where We ain’t have to do this shit no more.

Exactly. Do you feel like you’re getting closer now than you’ve ever been before?

How have you liked the response to the first singles – “Cheap Sangria,” and you’ve got the one with Mick Jenkins [“Sprague Street”].

Kipp Stone: That shit was dope. This has never happened to me before. This is probably one of my more successful rollouts, because most of my rollouts get messed up, but this one has been flawless.

Messed up in what ways?

Can you talk a little bit about what it was like growing up like in East Cleveland?

Kipp Stone: Growing up in East Cleveland — when you’re from somewhere, you don’t really see it too bad, for real. It didn’t really seem like the neighborhood was messed up; you don’t realize that until you get older, for real. I just always kept to myself, and when I started writing, that was my little — I don’t want to say escape, but I just realized I had to do something. You’ve got to find something that you’re good at, or you’re just going to be stuck, for real.

But not everybody finds that. How quickly into you rapping did you realize that, “Oh shit, this is something that I’m really good at?”

Kipp Stone: It took a while, man. Years, years and years and years, probably about five years before I was like, “Oh damn. I am actually good at this shit. I haven’t been wasting my time.” That would’ve been a whole other thing.

Were there people you grew up with who were also rapping?

Kipp Stone: All the people – my cousin used to rap, my cousin A-Rod. There was people like Fat Al, Chip tha Ripper or King Chip, whichever you’d choose to call him, people like Pooh Gutta, Cleveland legends. There was always somebody to look up to.

What kind of stuff did you grow up listening to?

Kipp Stone: I was listening to a lot of stuff. I think the first time I loved loved loved music was probably after I heard “Feel Good Inc.” by the Gorillaz. The Gorillaz was one of the first musical acts that I was just like, “Yo. This shit…,” it gave me an appreciation for music. Rap-wise, the first rap album that I listened to front-to-back was Reflection Eternal by Talib Kweli; that’s still one of my favorite albums.

Did you get mostly into conscious rap early on?

Kipp Stone: When families split up and stuff like that, you’ve got the custody thing. I’m with my dad every other weekend, and I’m with my mom most of the time. They had problems, but they was never too bad; they never used to really get into it too much, except for the one time that I highlighted on the album. For the most part, it was just weird. When you grow up like that, you just think that’s how it is. You feel like everybody’s going through that shit, or like, everybody got some type of understanding of that shit, until you start meeting people who their parents were both around. They had their mom and their dad around and they love up on each other and all that kind of shit. You don’t really realize that shit is not normal until you start doing other shit, like talking to other people and meeting other people.

It’s like, going back to the way you viewed East Cleveland, it wasn’t until you got older and able to remove yourself from it, that you realized what it was like.

Kipp Stone: Yeah, when you start getting older and you start realizing stuff and start growing up and it’s like, “No, this shit ain’t normal. This shit is actually pretty fucked up.”

Do you have a desire to rep for East Cleveland and stay there? Is that something that you think about?

What do you feel like you need to do to take that next step in your career, in a way that maybe hasn’t stuck yet?

Kipp Stone: You know, I ponder that all the time. If I knew, I would have done it by now, so I’m just trying to figure it out. I think we’re on the right track right now, but it’s a lot of stuff. Back in the day, I wouldn’t really listen to nobody; I was stuck in my ways and standoffish and stuff like that, so that’s a really big thing. I’m working on coming out of that, and in my time away, when I was tucked away for a little while, I just realized, you can’t do everything by yourself. There are people you need to work with, and you need to listen to the people around you. That was just a whole thing, for real.

How did you begin the process for making this new record? Did you know that you wanted to make a whole album?

Kipp Stone: I knew what I wanted to talk about, but I didn’t know how to go about it because, up until now, I always felt stifled in my creativity. There was always someone telling me like, “Oh, you should make a song like this,” or, “You should talk about this,” or, “You should go in this direction,” and most of the time, I would do it, but I wouldn’t really feel it. I can do that all day, but this ain’t the kind of music I want to make. This was the beginning of the process of me making the kind of music that I want to make. That’s why, with the album, I did mostly everything by myself.

You produced a lot of the record, too.

Kipp Stone: I think I made 11 things on this record – I made everything except the interlude, the second half to the Jackboys song, “The World Be Trash,” and I think “Caravan.” Everything but those four.

Do you produce for anyone else, or do you mostly like keeping beats for yourself?

Kipp Stone: Oh no, I produce for everybody. We’ve got a little collective of people that we rocking with in Cleveland and stuff like that. It’s me, three other producers, two videographers and four rappers. I produce for the homie Nuke Franklin, I produce for my homie Shawn K, Torre Lott, and of course myself.

So there’s a community you’re fostering there?

Kipp Stone: Yeah, it’s like a hub. We all just got together and we got to rock out together.

Does that push you? I know there has to be a little bit of friendly competition within the scene.

Back to the drawing board.

Kipp Stone: Yeah, and just don’t stop. We’ll tell you if it’s not it.

Kipp Stone: It’s like I said, I’m now making the stuff that I wanted to make. I never was confined to just rap, I didn’t listen to a lot of rap. Of course I love rap, but I listen to a lot more genres. At the time, I was listening to King Krule and Yellow Days and River Tiber, obviously the Gorillaz all the time, Arctic Monkeys, I could go on forever, but I just wanted to incorporate all that stuff in there, and a lot of R&B. I was listening to a lot of R&B. A lot of the time when I made that, that was one of the best times for R&B – like every R&B album that came out was just crazy.

What do you hope someone that listens to this album understands about you and what you’re trying to do with music?

Kipp Stone: It’s been a dream of mine to hear people arguing about what I meant when I said this or what I meant when I said that, real conversation starters. Do you ever have a song you listen to on an album and you just stop it after the song and be like, “Dang, remember when he said this? This song right here, I think this is my favorite.” I don’t know, just an appreciation for the music and the lyricism and the message, for real.

Blueface Makes It Rain In Skid Row For Christmas

Rapsody Dissects A-1 Lyricism On #RateTheBars