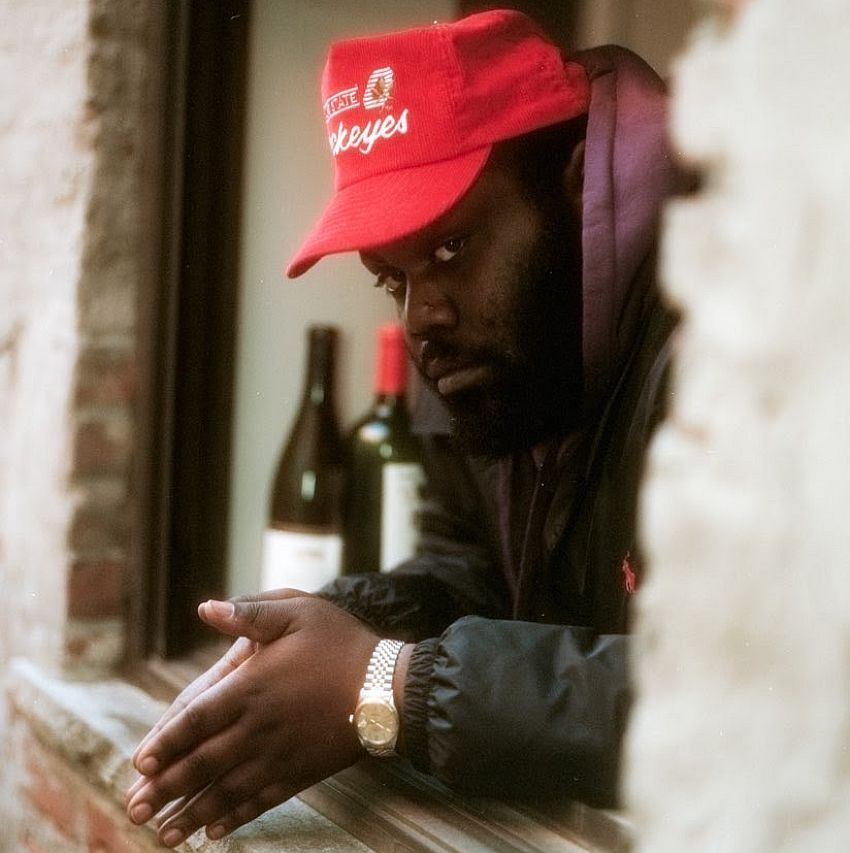 Please support our collective of rap scholars by subscribing to Passion of the Weiss on Patreon.

When Chuck Strangers returned to New York this year after living in LA for a while, the city had changed in drastic ways. His old hood in Brooklyn was nearly unrecognizable, and Bed-Stuy, which he used to avoid as a kid because it was too dangerous, was now overrun with $15 salad joints and Whole Foods stores the size of city blocks. Artistically, too, the city was at an impasse. The Golden Age renaissance pushed forward by his Pro Era partner Joey Bada$$ was slowly losing steam, as a new generation of lo-fi leaning, stream-of-consciousness aficionados were taking over.

Of course, the OGs still remained to bridge the gap. Strangers fits in alongside the latter camp, and as such, it makes sense that he got Ka to spit a verse on his new EP, in addition to features from Caleb Giles and Navy Blue. Strangers exists somewhere between these two worlds, and as an in-house producer for Pro Era, he’s finally stepping out and showcasing his bars.

This wasn’t an easy place to land, though. “When I first started rapping, people used to say that I sucked,” he says with a laugh. “Like, ‘FromdaTomb$,’ people hated that verse with the beer pong reference. Even I cringe at it now, but I was like 18 or 19 when I wrote that, and now I’m 28 years old.” Chuck is quick to laugh at himself but he also demands to be taken seriously. His production credits would make any up-and-comer jealous, and there’s a reason why he gets co-signs from such a wide-ranging group of artists: not many musicians are occupying the lane Chuck Strangers is cruising down. We sat down with the MC to discuss his new EP, Too Afraid to Dance, stepping out of the Pro Era shadow, and his desire to make relatable rap music. — Will Schube

When did you first start working on the new EP and figured out that you had a full record?

Chuck Strangers: Not that long ago. I probably started working on it in the summer.

Damn, so it came together pretty quickly for you?

Chuck Strangers: It came together pretty quickly because we were already in the groove. Without getting into too much detail, I’ve already finished a bunch of stuff, so this EP was like, I don’t know, almost an extra-credit. It came out so good that we were like, “Yo, we need to put this out now.”

Because it’s been a few years since your last record, were you eager to get something out?

You’ve got a few really distinct guest artists on here – Ka’s a legend, Caleb Giles is great – what made you reach out to them and why did you feel like they were good fits for the sound of this record?

Chuck Strangers: Well, Ka is like a big homie to me. I’ve known him for a while now; I’ve known him for probably 3 or 4 years now, him and Animoss. I was there when they made Orpheus vs. the Sirens, for most of it. I hung out when they were making that, and it was funny because no one else was there; it was top-secret, “Nobody come to the crib.” It was a blessing just to see how that came together. Through that, we just grew a friendship, and he doesn’t do songs with many people, at all. I showed him the song and asked him if he wanted to be on it, and he said, “Yeah,” and he did it — really fast too, so I was like, “Oh shit, let’s go!” Him and I also have other songs that will probably never see the light of day; songs we made as just friends, not for no project or not to make no money off of, just like, “Oh dope,” because why not? “Let’s do a joint that we’ll just keep for the archives.” He killed me on those joints too, so that’s part of it. He helped me get way better as a rapper. Not even with telling me, “This is how you do this;” just talking to him and having conversations with him, him putting me up on all kinds of music, like 80s rap. I learned so much from him. Caleb, I met through some other mutual friends, and I thought his music was mad dope; I thought his music was cool. I really like Standing on the Corner, so I was like, “Yo, let’s do something.” He came to Brooklyn and we laid a joint. That’s one of my favorite joints on there too. Navy Blue, Sage, killed his joint too.

What’s it like having all this fresh blood in New York rap? Is it inspiring for you?

Chuck Strangers: It’s inspiring, for sure. It makes me want to show that I’m just as good, or better, than everybody. Especially because when I first started rapping, people used to say that I sucked. Like, on “FromdaTomb$,” people hated on that verse with the beer pong. Even I cringe at it now, but I was like 18 or 19 when I wrote that, and now I’m 28 years old. My raps now aren’t about playing beer pong or having fun; I just lived so much more life since then.

That’s the problem with the internet: if you put something on there, people are going to be able to find it.

Chuck Strangers: And hey, that’s cool. I’m not tripping over that; we all got to grow from somewhere. That’s my Juvenile Hell. But this, this is The Infamous though.

Speaking of Juvenile Hell, what sort of stuff did you grow up listening to?

Chuck Strangers: I grew up listening to a lot of different stuff because my parents are from Grenada so they weren’t necessarily into rap. I grew up listening to a lot of reggae; it’s so good. I have an older brother, so by the time I got to 5th grade and stuff, I started finding out who Nas is, started getting into Stillmatic, The Blueprint, started getting into all of that stuff. I made it my job to go back and buy a bunch of other CDs because, I don’t know if you remember those times, you couldn’t just walk into Sam Goody and buy 36 Chambers, they wouldn’t have that shit in there, or it just wouldn’t be in-stock like that. You had to always find these hip-hop stores, or stores that catered to shit like that, where I could go buy Only Built 4 Cuban Linx…, or I could buy It Was Written. I used to go to this place called Beat Street off Boynton in Brooklyn where they had everything, but they closed down. They closed down years and years ago.

What’s it like being back in Brooklyn? It must be a whole different world from when you were growing up there.

Chuck Strangers: It’s pretty crazy. It’s surreal because a lot of places that I grew up being petrified of, are just not like that anymore. Even parts of Bed-Stuy, I’ll be walking around, and I’d remember being terrified — not terrified, because I’m from Flatbush so I don’t know people from Bed-Stuy like that. I’ve got a couple homies out there, but not enough to get me out of the jams or anything like that. I remember just walking around out here, always being on my P’s and Q’s, and now you see it and it’s like, shit is a lot different. I feel good and bad about it because I feel bad for the people who couldn’t afford to keep up with this upswing of soul shit, who got this place, but it is also good for the kids who are able to hang on and remain and really take advantage of this new vibration that’s going on.

When you were in high school did you know that you wanted to be in the rap game, or what were you getting into at that point?

Chuck Strangers: Yeah, I always knew. I started making beats in about 10th grade. I didn’t know I would be a rapper, because I’m not going to lie to you, even in high school, I was worse than my friends at rapping. But you know what though, they would lie in their raps though, and I never used to lie in my raps; that’s something that I pride myself on. They would rap about having guns and shooting people up and doing all this shit they weren’t doing, and I would rap about, I don’t know, being robbed. Real shit, I would rap about, “Yo, maybe she ain’t call me back or something,” and people thought that shit was corny. Maybe it was, I didn’t find a way to articulate myself in the best ways yet, so I started making beats. I still wanted to be down – I always wanted to be special as a kid. I didn’t want to be regular as a kid. I was like, “I don’t want to get up and go to work every day; I want to be special.” As corny as that sounds or whatever, I just always wanted to be special. I always really loved music, and I loved the fact that rap music took old music and reinvented it and made it new, so I fell in love with that whole concept. I got an MPC 2000 when I was 13, when I was in 7th grade.

What was your relationship with your older brother like? Did you look up to him?

Chuck Strangers: Yeah, of course. When I was young, I looked up to him a lot. Then we went through the phase of, when I was 14 and he was like 19, “Alright, we’re different.” When I got older, like 18 or 19, we realized that we’re the same, and he’s been my best friend ever since.

What do you hope people listening to this new EP take away about you and what you’re trying to do in the rap game?

Chuck Strangers: I hope they take away that I got way better at rapping. I hope they take away the transparency. I feel like, on this project, I tried to be as honest as I could, so I hope someone listening to my shit – like I rap about having to sleep on floors and all this kind of stuff. I hope that someone who’s going through that situation now and is aspiring to do something too, I hope they can hear that and that’ll be music for them like, “Let me just keep going because I feel it in my heart; I can’t quit no matter what.” That’s what I would hope people take away from that – just to keep going, and that I rap nice now.

Chuck Strangers: To be honest, I don’t know what that means. I don’t want to sound mad arrogant or nothing like that, but I see myself with all these guys, man. There’s a Kanye West song that I love where he says, “Man, these n****s that much better than me?” That’s how I feel right now. I want the opportunity to prove that these n****s don’t rap better than me. Let me get that opportunity; I can do it too. I’m just in a good space, so I see myself right where they are. Not to be on some competitive shit or like, “I’m going to be further than them,” because it’s all love. That’s why it’s a hard question for me to answer, because I don’t want to put myself ahead of nobody because I don’t think that’s cool, but man, like I said, I see myself taking this creativity and this energy that I’m feeling right now, and taking it to the highest level that God got in store for me.

Up Too Early: An Interview with Leeor Brown and Somni