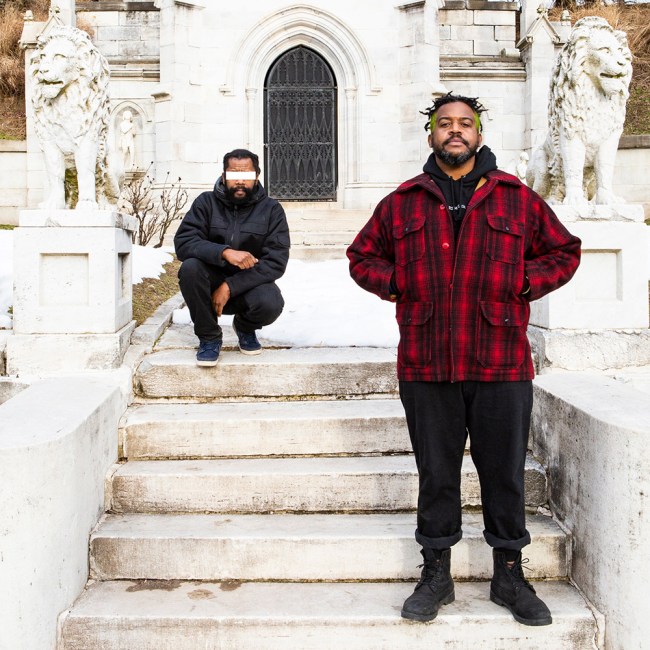 Straight killer, no filler. Show your support to the last great collection of ad-free music journalism not hiding behind a paywall by subscribing to the Passion of the Weiss Patreon.

Joel Biswas‘s only fear of death is reincarnation.

In Arabic, “haram,” means “forbidden,” but “foreboding” might be a more accurate description of the collaborative album between LA’s veteran producer Alchemist and Brooklyn underground rap duo Armand Hammer. Brooklyn MC’s billy woods and Elucid have always been hyper-attuned to karma, most of it bad, but here with the help of Alchemist at his most symphonic, they dissolve layer upon layer of experience until they approach a state of grace.

Over the course of four LP’s and two EP’s since 2013, Armand Hammer have woven strands of memory, history and novelistic fiction into probing art-rap capable of staring down ironies both cosmic and personal. In an era where much of rap is taking poolside selfies as the world burns, they present hip hop as musical shadow work, dread incantations from the collective unconscious that bounce in appealingly eccentric ways. They belatedly find themselves at the heart of a quiet renaissance of lyrical, ideas-driven New York rap, an overnight sensation fifteen years in the making. And while they bristle at Def Jux and Rhymesayers comparisons, the lineage is undeniable; billy woods, who founded their label Backwoodz Studioz in 2003, started rapping in earnest after being personally encouraged by close friend Vordul Mega of Cannibal Ox.

With indie peers like Quelle Chris and Mach Hommy gaining plaudits far beyond the five boroughs, forbidden things can only be resisted for so long. The arrival of Alchemist, one of rap’s premier musical stylists into their multiverse is less counter-intuitive than it might seem. For one thing, he’s just as experimental in collaboration and equally as prolific as woods and Elucid. For another, he’s also got formative roots in 90’s New York, recording “The Man, the Icon” with Big Daddy Kane at DJ Premier’s D&D Studios and shopping other early singles to legendary label and record store Fat Beats nearly two decades ago. And since he first demonstrated a gift for revealing new facets in familiar tropes on Prodigy’s blaxploitation-drenched classic Return of the Mac in 2007, he has been making reliably blunted underground albums with rappers he likes just because he can.

Behind the potent yacht-rock and film-noir sounds of Grammy-nominated Alfredo, Alchemist is quietly pushing against stylistic confines. Contemporaneous albums like Boldy James’ The Price of Tea in China or Fett with Freddie Gibbs and Curren$y are neo-noir rap albums in the truest sense, deconstructing the genre even as they add the canon. He got turned on to the music of Armand Hammer by mutual collaborator Earl Sweatshirt – the world-weary West Coast existentialist who makes a fitting appearance here. The arrival of Haram may not have been foretold, but it was inevitable.

As Paul Thompson’s interview with woods, Elucid and Alchemist in GQ reveals, the making of this album was peripatetic, repeatedly interrupted by competing projects, tours and ultimately Covid-19 – concluding as a lockdown project made in the most extenuating of circumstances. But to hear it is to traverse an organic dreamscape where neither dark mood nor epiphany lingers too long, less a series of songs than a series of fugues.

Opener “Sir Benni Miles” is a tone poem of unpredictable currents with a plummeting synth arpeggio and two-step drums that hit like a depth charge. woods weighs up defiance and desperation in bravura fashion – ‘Aint no saving us/ Ain’t no slaving us/ You gon’ need a bigger boat, you gon’ need a smaller ocean but here’s some more rope,’ while Elucid is stoic and poised, knowing that ‘There’s no mystery god/ the deepest look inside.’ On “Bring the Stars Out”, they trade prose rather than flows; woods is high in church musing on tactics for whatever game all of this is while Elucid surrenders ‘to where path pulls.’ “Indian Summer” sees them ride an unbearably tense flute loop with a whisper of woodblock and cymbals; woods intones oaths of retribution but Elucid thinks vengeance is more than you deserve.

“Chicharrones” is the aural equivalent of tea leaves dipped in embalming fluid and most oblique anti-police track you’ll ever hear as woods raps “Negroes say they hate the cops but the minute something’s off they wanna use force,” while guest Quelle Chris takes the cops-as pigs metaphor to surreal extremes. In a move reminiscent of musical heroes Company Flow, each rapper gets a solo joint but here “God’s Feet and “Peppertree” are companion pieces possessed by post-colonial reckonings and voodoo hexes.

Elucid consistently raps like he’s wired to explode. On “Aubergine,” his staccato cadence and gift for fracturing language embody the song’s tension and release: ‘This is radical ascension… this is breath for the winded/ clarity, if conflicted.’ billy woods is more operatic. On “Falling Out of the Sky”, he locates the nostalgia residing in a faded dub groove, recollecting an idyllic summer spent in California as the past and present collapse into one. He’s almost joyous and when fate inevitably intervenes with a sting in the tail, it only makes the recollection sweeter.

Alchemist matches them in virtuosity throughout, throwing off the imprimatur of “thug mood music” with quiet abandon. He unifies the baroque turns of Armand Hammer’s writing with reverb-drenched transitions and punctuates their biggest ideas with the most experimental beats of his career. It is hard to imagine any other Alchemist collaborator tackling the stuttering polyrhythms of “Aubergine” or the sub-basement fug of “Wishing Bad.” He most explicitly expands on ideas found in Fetti, an album where the interstitial moments were often as interesting as the songs. The wailing beat coda on “Peppertree” sounds like restless dead who woods and Elucid have just invoked. He adds grandiosity and added ripples of tension to their delivery throughout with echoey flourishes that accentuate individual lines or syllables. When he inserts a plaintive voice at the outset of “Robert Moses” asking, ‘Can God forgive us for what we’ve done to this world?’, he locates the essence of Armand Hammer’s artistic purview.

Beyond denoting the immoral, Haram may also describe rarefied things that can only be accessed from a place of purity or with sacred knowledge. For all of its attendant darkness, the music on Haram can’t disguise its yearning for both. The result is an album that lands squarely between the steely paranoia of their 2018 masterpiece Paraffin and the looser, more buoyant Shrines, a twilight forest of ideas that’s worth getting lost in.

For fans of Armand Hammer’s whip-smart brand of art rap, their union with Alchemist is that rare case of the mountain coming to Mohammed. For billy woods and Elucid themselves, finding their music at the center of the subterranean zeitgeist is one twist of fate that will probably feel like justice, even if it brings light and heat they could do without. (PETA have already complained about the pigs’ heads in the album cover.) Haram is the documentary sound of right now not because of its unflinching gaze into our collective darkness but because of its ability to do so with a total lack of cynicism.