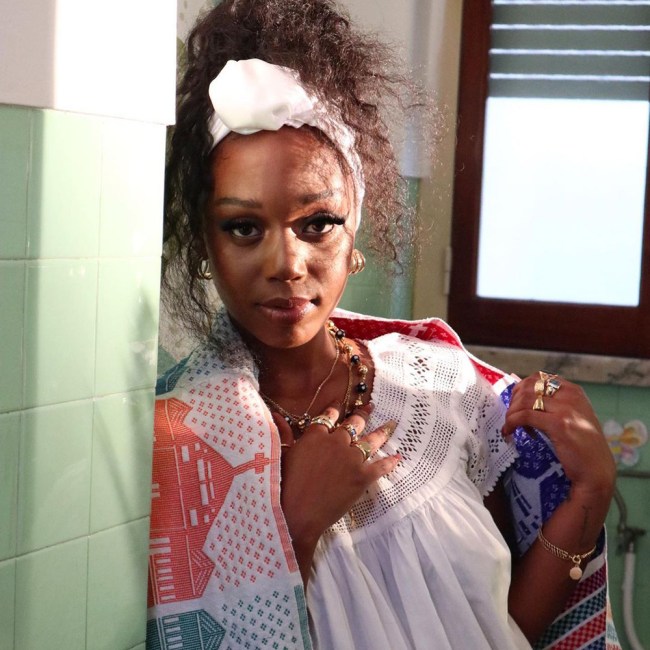 This track is as close as we can get to the complete fulfillment of kizomba’s emotional and sonic potential. Bissau-Guinean-born, Portugal-based star Yasmine’s “Pega nha mon” is one of those once-in-a-year tracks where everything aligns, everything just fits perfectly, from the main acoustic guitar riff to the flute flourishes, and even the organic percussions underlined by the tresillo claves are mixed at just the right levels, especially in the choruses, never feeling invasive or cluttered.

But of course, this show is all about the stellar vocals and melodies of Yasmine. The singer’s reputation as one of kizomba’s most romantic melodists is perfectly justified by the song’s themes of love and marriage — wonderfully illustrated by the Guinean Leba Cabaz wedding ritual in the video —, but most importantly, by the sheer sense of wonder evoked by the pre-chorus refrains, and when she reaches the end of that two-part hook with the titular phrase, it just leaves you gasping for air. Her silky, zouk-influenced tone has worked to great effect before but when it’s combined with the acoustic instruments, especially that flute in the second chorus-bridge transition, it covers you with its warmth. It feels like a tender embrace.

One of the main reasons it’s so fun to cover the African music scenes is the abundance of infectious dance numbers everywhere in the continent, especially in East Africa, where styles like Bongo Flava and Gengeton specifically mirror reggaeton and other styles in Latin America, in a way reflecting the African origins of these rhythms. I’m also a sucker for crew tracks, like this dancefloor heater over here; “Chini Chini” brings the talent of six distinct voices, as Kenyan group Matata teams up with Mejja (previously covered here) for a perfect weekend tune. You can pick which one’s your favorite verse, but the true star is the beat, especially that pervasive synth riff looped throughout the track. That minor Phrygian inadvertently connects it with a similar middle-eastern vibe trend going on in manele and even reggaeton right now.

Oh yeah, he’s back. Talented kuduro upstart Cleyton M is quickly revealing himself as one of the most promising performers in Angolan music; he’s a natural entertainer with a big presence and some dazzling dance moves, which really matters in the batida-based genres of Lusafrica. For “Slow Motion” he extends the Michael Jackson gimmick of his last single and adds a new reference, the Godfather of Soul himself, James Brown, aping the hook of “Sex Machine”, which somehow works wonders with kuduro beats. It’s a stroke of genius on his part, to be honest, as the move feels so obvious I still wonder why no one thought of doing it before.

Another idea that seemed obvious the moment I started listening was to mix drill music and coupé décalé. Both styles are raw, aggressive, and confrontational, they both speak about the urban underworld, and they’re both constantly associated with street violence, but the Ivorian genre is beginning to reach beyond that, turning into a protest genre, a militant cry from the nation’s proletariat. Safarel Obiang combines the styles in a balanced way, using drill fills and manipulated, auto-tuned voices in the verses, but always keeping the fast pace. The instrumental is pretty complex, with a double guitar attack, a descending piano loop, and spooky synths, but it all works to express the fusion of styles.

Sensual, r&b-inflected afrobeat is everywhere these days, but what happens if we add a tumpa tumpa beat, a guitar that’s playing a Cuban cadence, an intro with a cumbia güiro, and a singer that sounds like a less cringy Jason Derulo? We get “Ye Ye”, a sensual, summery track that’s interesting in both concept and execution. Even the blaring synth-horns in the chorus are so well produced they don’t drown out the “ye ye” chants and the percussions.

Ok, what the hell is going on in Tanzania that the Bongo Flava scene is getting so adventurous? They’re really taking advantage of their opening up as a tourist destination — really, check that out, looks really beautiful over there —, because they’re using elements from everywhere in the world to create tracks with equal global potential. Zuchu’s “Yalaaaa” is a bass-heavy, sonically ambitious example; taking melodies akin to Middle-Eastern trends (or rather Somalia’s synthesis of Africa-meets-Arabia sounds), classical guitars, and flutes to achieve maximum club banger quality. Also, Moccu Genius’ production perfectly honors his name, and Lizer’s mixing, especially on how the bass-heavy sections of the track are spaced, is on a league of its own. And yes, they completely flip the script with that traditionally East African coda; every percussion sounds on point.

From the opening scenes of the 70’s-style video, I know this was gonna be right up my alley. Poptain’s “Sota” seems pretty simple at first; an I-IV-V-IV chord progression, a bouncy beat, and some cluttery percussion, but on a deeper listen, you can check the intricate interplay between the ever-moving guitar figures and the rollicking synths all throughout the track, an element that feels the most powerful in the chorus, as Poptain sings that titular line for bouncy effect. If anything, this is how you do three-chord songs.

LeBron James Turns Up With 2 Chainz For 35th Birthday

Megan Thee Stallion’s Label Celebrates Her No. 1 With Beyoncé — Despite Ongoing Legal Drama