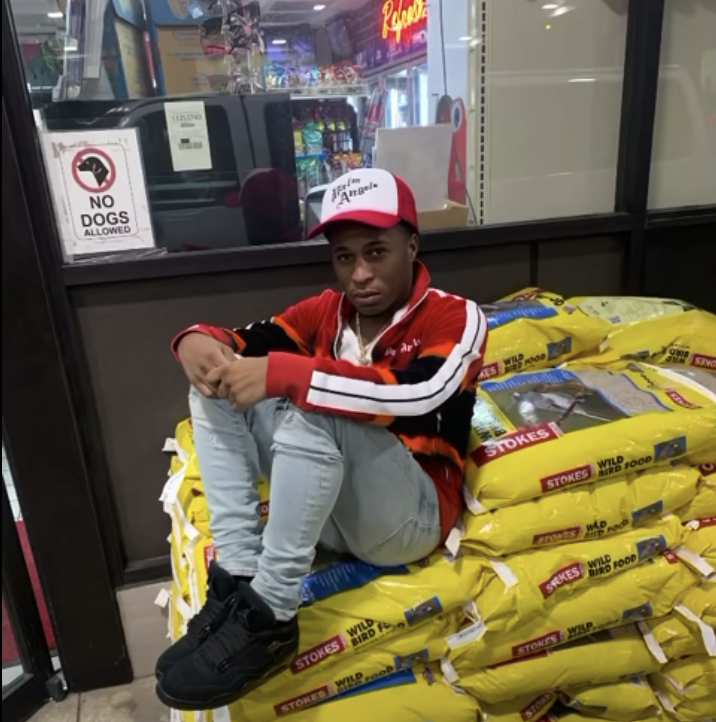 Please support truly independent rap journalism so we don’t have to hack your CashApp password. Please subscribe to Passion of the Weiss on Patreon.

Harley Geffner‘s next pitch is to Oprah about scamming the Royal Family.

What would you do if you could wipe the year 2020 from your consciousness? Kobe, Pop Smoke, and many loved ones were lost, as well as a year of good hair and (maybe) hotness, but on the other hand, Kasher Quon dropped more than 80 loosies on scattered youtube accounts, and every single one was hot. It’d be a tough choice.

It was 2019 when I really fell in love with Kasher Quon’s rapping, as he rose to national prominence out of Detroit alongside Teejayx6 for the absurdity in their raps. Kasher had been rapping for many years before that, but Teejay, who was still a teeanger, gave the style that extra wow factor with the added shock value on his bars. Kasher said in one interview that he’s not really scamming his family members or people on the dark web, or at least no more than a local scammer collecting gift cards and doing some light stuff to get ahead and pay for studio time. But Teejay would really bring reference points to the higher scamming terminology, rapping about watching girls kill themselves in red rooms while Kasher was rapping about more petty shit like doing Cash Back at the self-scanner machines. Teejay has more of those bars that’ll knock you back, but Kasher has been more consistent across the board and his chemistry with some of the best producers out of Detroit is off the charts.

Kasher sounds great with high-octane Enrgy beats, but really shines when he gets to rip some jazzy piano or saxophone courtesy of Undefined. He’s got some Wayne-ian instincts in the way he rhymes things that have absolutely no business rhyming, but he also is just as content rhyming a word with itself 4 times in a row.

Kasher thrives in absurdism to the point it feels like you’re listening to a rap version of “Waiting for Godot’ at times. Like a boxer, he’ll lull you to sleep with two or three boring jabs about smoking runtz or London pound, then he’ll throw a crazy 6 line combo, punching in to telling a complex story about why he wasn’t able to make the bitcoin machine in West Philly work. Some of it makes little to no sense at all and some of it shows an incredibly wise, mature, and self-aware perspective, like when he rapped, “Why would I be mad teejay blew past me, it ain’t even shit man cuz we all family.” But mostly it’s just hysterical.

The main challenge with creating a list like this is ranking the songs, so consider these rankings incredibly loose. Kasher is so consistent that his best song and his 50th best songs are not all that different in terms of quality. A lot of it depends on how beautiful the piano sounds and what types of pockets he falls into with his flurries. I mean, in a lower tier on this list, there’s a song where Kasher makes up an alias for someone who asks him his name in an airport, then realizes he’s not a threat because he’s wearing Adidas shell toes and is so fucked up that he can’t even buy a bag of Ruffles.

He has recurring characters in his raps, like a crackhead named Ezel who makes a few appearances, he has recurring themes like beating people’s asses with an assortment of objects such as a Disco ball or can opener, and most famously, he calls people poor by saying they’re fucked up in the crib or elsewhere doing poor people shit. Here’s an abbreviated list, divided by location:

Fucked up in the crib:

Fucked up, in other places:

Unfortunately, artists like Kasher who drop at such a torrid place have their stuff scattered between many different YouTube accounts and some of those songs get pulled down pretty frequently. I started a Kasher playlist near the start of 2020 and added to it as I went through the year and it had gotten up to 80 songs including all the features by the end of the year, but many were removed and the playlist now sits at a mere 57 songs. Some bars from the lost ones still pop into my head, and others I don’t remember and will be lost to time. Or maybe they’re just on another account. Actually, they’re probably at a Wells Fargo in Chattanooga.

“Just bought a new crib this bitch warm and comfy / Yo mama kicked you out the crib cuz she old, she grumpy”

“Do you wanna fuck, yes or no, you confusin’ me / Can hear the lean talkin’ to me right now sayin’ you abusin me (stop)”

Kasher told a story on TheHipHopLab’s podcast about how this song taught him he’s got to be legit careful about what he says. He apparently got pressed in Florida because of this bar:

“Got into it with some n***** from Florida in Opa Locka, I’m finna bring the whole Detroit and shoot up Opa Locka”

Just over a minute of dark energy, and Teejay is hungry on this one.

“I’m eatin’ off EDD shout out to the government / Why the prices on the lean so high, that shit don’t make no sense / Don’t bring your hoe around me ‘cuz I’ll take your bitch / How you say you gon’ rob me and you ain’t go no stick”

Here’s a good example of how his patterns keep you off-balance.

“With all this coronavirus goin’ on I won dap you / You just got a dirty bitch pregnant, she trapped you / And I cheated on my bitch, she slapped me … but it was my fault, ran off with his BOA and said ‘my fault’ (my bad) / Like my fault bro, I ain’t mean to run off with your card / I’m sipping on green right now and I popped a bar”

“I heard that you just got evicted ducking your landlord / he couldn’t pay the rent, it cost a dollar to get a Game leaf, he got 50 cent”

“I don’t even wanna smoke, my mans keep rolling up”

“Stole 20 out your grandma purse, you a bum for that / ran into my opp and bumped him he better not bump me back”

“I heard you got zero dollars on your birthday”

This one’s groovy and high-energy.

“I’m in Walmart doing some Cash Back at the self-scan (bing) / I can’t see myself leeching off another man (nope) / that’s impossible, I’m finna pour up some Hi-Tec in a tropical”

“I scammed a bitch last year on April Fools, She thought she was finna get a package I told her April fools”

“Bought a fake ID now my name James Bond, I love fuckin around with your bitch we got a good bond”

“Caught one of my opps at the store and I punched him in the tooth / and I heard his cousin wanna buy lean, Imma play with his juice”

“I’m sick this bitch got on K Swiss”

I love it when Kasher goes bar for bar with someone who can hang, and they’re able to play off each other’s words. RSLG actually has the more impactful bars on this one:

“You only got 1500 why you need a rubber band / boy you can’t hustle for shit, you need a helping hand”

“I had to break up with my last bitch, she got on my nerves / got all her clothes and I put ‘em on the curb / she can’t find me now ‘cuz I stay deep in the suburbs”

“I’m tired of this court shit when the fuck is my next appeal? / I’d still scam you even if I got a hunnid mill / Cuz there was time I didn’t even have a hundred dollar bill”

This beat is pretty magical.

“I’m chillin’ with some hoes right now on Miami beach, we bought to have a good time / why a n**** try to match me with a good time”

This one is mad funky.

“Drinking all that green you gon’ turn into Piccolo”

Calling someone “pointless” because they don’t have payment apps is hilarious.

“This bitch pointless she ain’t got Cashapp or Chime / Seen this n**** at the airport just said is you Kasher Quon / I told that n**** I’m Kasher Juan, scammin online that’s white collar crime / So what I’m tellin’ you I ain’t finna do no jail time / how you finna hold me and you still wearing shell toes??”

“I treat that bitch like a liquor store, I’m in and out”

Another one where they go single line for line.

“Just popped this n**** in the face with a football”

This is very much a Rio beat from Enrgy, but Kasher still stands out.

“I was tryna fuck that little hoe ain’t have no condom / these shoes i got on my feet you can not find ‘em (nope) / these bitches sold out, I just got booked for a show and it’s sold out”

“I just wasted two thousand dollars on a reptile”

This is again, very much a Rio song with those different types of church bells. I’d like to hear Rio and Kasher together on a more Kasher beat.

“This bitch just got her braces done in the basement / I just killed a n**** and threw his body in a dumpster / that n**** trash, he just paid for a feature but he was ass”

5 grams in the backwood, fuck a pre-roll / I got my own damn YouTube, fuck a Vevo / I’m finna be on probation, fuck my P.O. / like, fuck him / this bitch always got Kasher in his mouth, you wanna fuck him?”

“Yo bum ass gonna go to jail, you drivin stolies / how you gon’ slide on me and you ain’t Moby”

“Unemployment got me rich I’ll never run out of money / I got a white bitch hoein’, sellin’ pussy for me / I got a lil n**** in the spot sellin’ cookie for me / the real question is who had it before unemployment”

“I’ll have a crackhead come kill you for two dollars”

“I was finna fuck that lil hoe, she smell like a raccoon (what the fuck) / so that lil bitch turned me off, I didn’t wanna listen to your songs so I turnt it off”

Kasher is rapping here with the kid (Lil Esco 28) who has 4.5 million YouTube views from him saying “man I’m finna whip this hoe” about a nice-looking car. That kid in this song is worried about going to hell because he killed a toad.  After a line from his friend RobThePlayboy about someone shopping at Sears, Kasher chimes in:

“I heard you caught a 14 hour flight to skip lag”

Minus points for too many recycled bars, but a real nice beat and it still sounds good.

“Just because we went to high school we cannot hang”

“Woke up in the morning birds chirpin’ that’s all a n**** hear / she said she wanna get drunk, come over here (pull up)”

“I chose scammin’ instead of the honor roll”

Not sure Kasher thought this one through, but hey it sounds hard.

“I’m the first n**** with an American flag pistol”