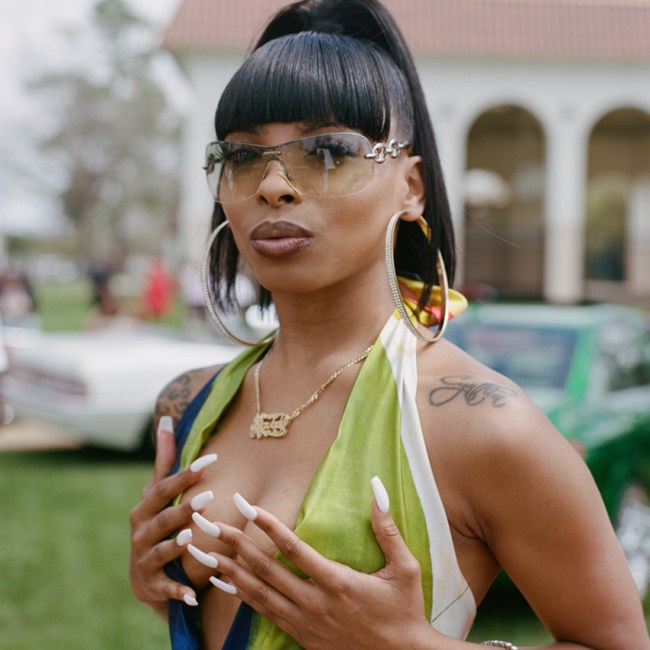 Dean Van Nguyen thinks what the industry did to T-Pain was fucked up.

Big Jade raps like a person who doesn’t want to waste a single second. Growing up on the northside of Beaumont, Texas, she has memories of her home being riddled with bullets as she and her siblings took cover inside—damage inflicted by a rival drug dealer who sought to send a message to her mother. The now-27-year-old’s fledgling career in rap has been stunted by seven months in James Bradshaw State Jail for parole violations (on an original charge of, Jade says, “scamming.”) Her first full-length, Bsbbj, was even assembled by producer BeatKing and dropped while Jade was still locked up. She didn’t even get to pick the song titles.

An uncontaminated vision of Jade’s style arrived last year with the 1-minute YouTube loosie “RPM.” Packaged with a simple video depicting her job as a part-time hairdresser, Jade’s words fly like they’re being fired by a minigun, the drums sometimes dropping out as if they can’t keep up her pace. Now we have Pressure, out on Alamo Records, the most fully rounded depiction of Big Jade yet. It’s battering, chaotic, obsessed with velocity, terrified of leaving any empty space. Take opener and single “No Hook”: Jade’s raps are rapid and breathless. When the beat switches half way through, it just intensifies the sense of bedlam.

“Jade Wins” opens with audio snatched from Mortal Kombat declaring the warrior of the same name to be victorious. It’s the kind of thing a rapper can build a theme tune on. “Jade Wins” features piercing strings, record scratches, a general sense of menace. “Bitch I’m a boss to ya muthafuckin’ boss,” she declares, indicative that this is a tape filled with writing that rarely extends beyond Jade’s rapping supremacy, the futility of her haters, and her libido.

The title of “All Gas No Breaks” seems to encapsulate her ethos, but Jade is not one-dimensional. The track sees her structure her bars in a way that double taps the rhyming syllable. (Sample: “All money in how you wanna do it/Run it up and don’t play-play/Boys dying every day, I don’t know what happened/Watch what you say-say.”) It’s a neat piece of well-thought out invention from a rapper that always seems to exist in the moment.

A lot of the album references 2000s hip-hop. “Pressed,” featuring an assist from OMB Bloodbath, is the most obvious song in Texan rap tradition—the kind of deep Southern funk instrumental that sounds like it’s been swirled around at the bottom of a Styrofoam cup a couple of times before being poured out of your speaker. Some signposts are more obvious: “Dem Girls” hijacks huge sections of David Banner and Lil Flip’s “Like a Pimp,” while “I Tell You Want” resurrects The Game’s “Dreams.”

Produced by BeatKing, “I Tell You Want” also features the kind of turned wayyyyy up bass that Jade favours. It’s as if she’s trying to prove her voice could overwhelm even the most expensive subwoofer. Victory exists in one direction—straight ahead. Anything that gets in the way, whether flesh and bone or brick and mortar, is likely to be steamrolled.

Outkast & The Neptunes Nominated For 2020 Songwriters Hall Of Fame