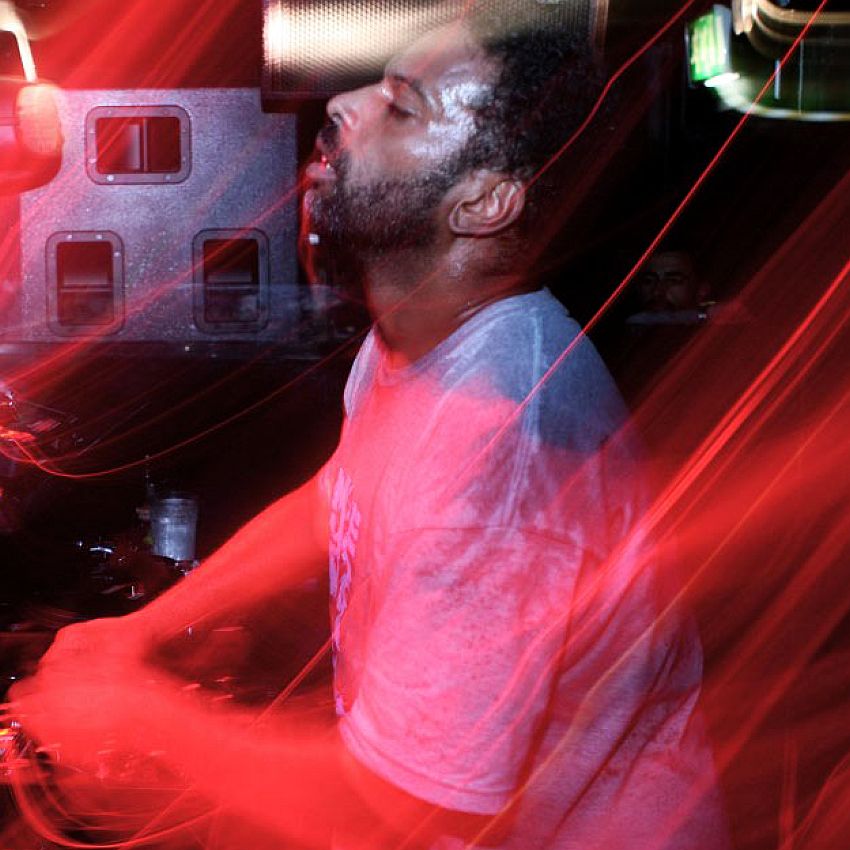 We just let the rhythm hit ’em. Please support Passion of the Weiss by subscribing to our Patreon.

Of all the albums I’m reviewing in this series, Theo Parrish’s Parallel Dimensions is the one you were least likely to own upon its first release. Initially dropped on Parrish’s own Detroit-based Sound Signature label in June of 2000, Parallel Dimensions is the archetypical underground dance music release: local, tracky and completely uninterested in reaching an audience beyond a core following of DJs and heads. In a year where a Murdoch-financed Rawkus was taking underground rap to mainstream ears, and European rave’s global takeover hadn’t yet peaked, it just wasn’t much of a concern, nor would it be for another few years. Yet over two re-releases in 2004 and 2017, Parallel Dimensions’ stature as a Detroit classic has grown and taken root, while its sound has proven incredibly resilient. Your average Y2K dance track – from trance to techno to D&B – usually sounds hopelessly dated to modern sensibilities. Parallel Dimensions sounds timeless and as vital as ever.

Of course, this is an easy claim to make with the benefit of hindsight. In 2000, even the few people who managed to get a hold of the record would have had a hard time knowing what to make of it. Detroit, after all, was the home of Techno, and Parallel Dimensions is defiantly not Detroit Techno, a sound that had propelled a generation of talent towards global careers, but that had also progressively been co-opted and reformatted by European DJs. To call 1988’s Techno! The New Dance Sound of Detroit a game changer would be massively underestimating its impact: from the UK to France to Germany and Japan, this collection of cutting edge dance music inspired multiple generations of bedroom musicians through its combination of funk and futurism.

Some remained steadfast and loyal to the sound, booking Detroit originators and zeroing in on purist’s expression of what made the original records work. Many more however, adapted Techno to their own needs, making it harder, faster and more industrial, or alternately more melodic, synthetic and devoid of Black signifiers. If Detroit techno was the sound of Kraftwerk jamming in an elevator with George Clinton, the dawn of the millennium’s European variants felt suspiciously devoid of Clintonian influence, something that didn’t go unnoticed in the genre’s hometown.

Unsurprisingly, producers and DJs in Detroit were at best ambivalent when it came to these developments –originators appreciated the European gigs and sales, but no one wants to see their city’s sound get progressively diluted and eventually turned into the Vengaboys. Yet while global dance music wrestled with this millennial identity crisis, a new generation of Detroit musicians were in the process of creating a whole new sound forgoing techno’s signifiers altogether, with Parallel Dimensions at the vanguard.

Theo Parrish’s available biography is remarkably sparse. Born in Washington D.C in 1972, and raised in Chicago, he would have been at ground zero when House music began its takeover of first Chicago, and then the world. Concurrently, he studied art at the Chicago Academy of the Arts and the Kansas City Art Institute, where he focused on sound sculptures built around loops, human voices and live instruments. It’s these two formative influences, the Chicago sound and the academic avant-garde, that he’d fuse into a deeply personal style upon moving to Detroit after college, one that foregrounded dance music’s history and Blackness.

By all accounts, it wasn’t long before Parrish began making a name for himself, first locally in Detroit and soon enough internationally via the network of European record labels signal-boosting the city’s innovations worldwide. It’s easy to see why: his records were funky, groovy, earthy but also futuristic. Early cuts like Walkin’ Through the Sky were deep, dubby house anthems with little in common with Techno’s synthetic textures and unrelenting rhythm, looking to Parrish’s Chicago roots and even further back towards crunchy, organic underground disco. This work fit in perfectly with the new wave of records by Parrish collaborators and fellow Detroit luminaries Moodymann, Rick Whilhite and Marcellus Pittman, cuts that reshaped dance music’s futurism into gauzy odes to Black music’s long lineage. If European releases were becoming synonymous with an erasure of dance music’s Blackness, willfully or not, a new generation of Detroit artists had stepped forward to reassert it, not through the militant loudness of say, Underground Resistance, but instead through the musical subtlety and grooves that they’d grown up with, reimagined for the MPC era.

A near half decade after Parrish’s first singles, he dropped Parallel Dimensions, his sophomore album, on Sound Signature. A major statement blending jazz’s ambition, soul’s emotion, funk’s slippery groove, gospel’s spirituality, House’s relentless drive and Hip Hop’s means of production, it stood out like a sore thumb amidst 2000’s space-aged UK garage and ecstatic trance. Too slow for European dance floors and lacking the superstar persona necessary to make it in a hip-hop-obsessed America, it nevertheless made an impact where it counted: in Detroit itself and in the crates of the few clued in DJs seeking deeper moods in their arsenal of records. Despite being a hard swerve away from techno, It’s hard to come up with another album so deeply in conversation with the city that birthed it. Taking note of Jay Dee and Slum Village’s imperfectly human sampling, it was as if Parallel Dimensions slowed dance music’s tempo back from a sprint to a groove and said “well then check THIS out.” It reached back to records and musical histories that weren’t just forgotten in the midst of techno’s global rise, but that never made it past the city limits in the first place. This was some serious shit, but it was also funky as hell.

The album’s tracks follow a fairly consistent musical formula: flip a sample, adorn it with percussion at the intersection of live drumming and programmed rhythms, and tease out variations until the track and anyone dancing to it can’t take no more. In lesser hands, this just wouldn’t work as an album — record crates were already awash in minimalist DJ tools, with few making for compelling listens off the dance floor. Parrish’s secret, is that he never really makes dance tracks: he makes great Black music that just happens to be perfect for dancing to. Take “Summertime Is Here,” the album’s 12 minute centerpiece: the looping and percussion ensure it’s dance floor ready, but over the course of a sprawling 12 minute run time, it slowly reveals itself to be a woozy, avant-garde slice of spiritual jazz that’s as good a fit for a post-club smoke as a late night deep cut.

Opener “So Now What” turns the kind of off-kilter sample flip Jay Dee used as an interlude into a nearly 10 minute excursion. “Serengeti Echoes” is so deep, it’s practically muted, its principle sample almost out of earshot under a cascade of hand drums. Even Violet Green, the track most indebted to early house and techno’s synthetic pianos and pulse, feels like a seasick take on the (now) popular formula, with conga triplets playing counterpoint to the steady 4/4 pulse.

Parrish’s secret weapons were his sampler, and his complete lack of fear when it came to slowing dance music down. Every track on Parallel Dimensions reconstructs a groove from the ground up, no rarity in dance music, but Parrish made it sound so seamless, so natural, that it’s impossible to figure out where the sampling ends and the jamming begins. Though he’d subsequently help make this a defining aspect of Detroit’s post-millennial dance music, in 2000 this was a massive shift for city best known by outsiders for its shiny synthetic textures and 909 drums. As for the tempo, Parallel Dimensions was once again ahead of the curve, serving as an early example of Detroit Beatdown, an aesthetic that never quite became a genre in itself, but that nevertheless reprogrammed Detroit’s take on House into slower, funkier and more nuanced forms. “Brains,” an 88BPM Sly and the Family Stone deconstruction, serves as a perfect example of just how far Parrish’s work was from mainstream dance music concerns, at nearly half the speed of trance’s race towards oblivion. In an era where new dance music subgenres were popping up annually, this was music that refused attempts to be labeled.

As Theo Parrish’s stature grew, so did Parallel Dimensions’, first on file sharing networks, and later via a series of reissues. Meanwhile, global dance music suffered a bust before returning with a vengeance as EDM, only for that bubble to burst yet again. It’s a testament to Parrish’s deep roots and single-minded dedication to his personal, underground ethos that work like Parallel Dimensions not only survived through these stylistic and generation upheavals, but thrived, finding a greater audience with each passing year. And though both Techno as an international force and Detroit music as a series of interconnected local scenes have both emerged as victors in the worldwide chase for listeners, Parrish’s work still stands as a defiantly singular.

Wuddaji, his most recent album, highlights was 20 years of dedication and practice can do for a skillset, but its instincts and concerns feel remarkably close to Parallel Dimensions’, which is to say that both are local music deeply rooted in Black history with the power and potential to crossover and make fans of anyone who happens to hear them. The history of recorded music is genuinely viewed through the lens of big hits and musical tsunamis, but thankfully, Theo Parrish’ oeuvre proves that sometimes, slow and steady wins the race.

May 21 Is Now John Singleton Day In L.A.